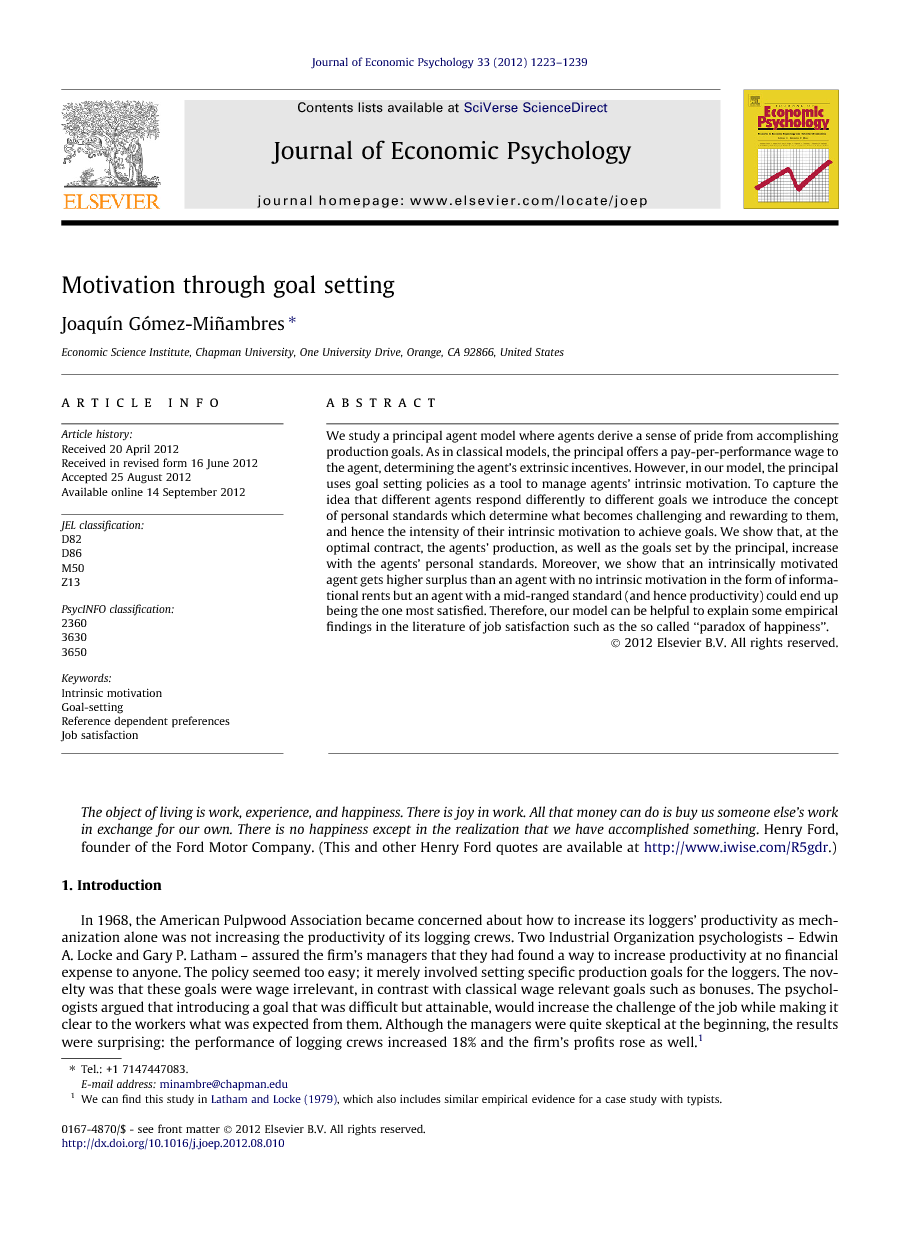 We study a principal agent model where agents derive a sense of pride from accomplishing production goals. As in classical models, the principal offers a pay-per-performance wage to the agent, determining the agent’s extrinsic incentives. However, in our model, the principal uses goal setting policies as a tool to manage agents’ intrinsic motivation. To capture the idea that different agents respond differently to different goals we introduce the concept of personal standards which determine what becomes challenging and rewarding to them, and hence the intensity of their intrinsic motivation to achieve goals. We show that, at the optimal contract, the agents’ production, as well as the goals set by the principal, increase with the agents’ personal standards. Moreover, we show that an intrinsically motivated agent gets higher surplus than an agent with no intrinsic motivation in the form of informational rents but an agent with a mid-ranged standard (and hence productivity) could end up being the one most satisfied. Therefore, our model can be helpful to explain some empirical findings in the literature of job satisfaction such as the so called “paradox of happiness”.

Psychologists and experts in management have long documented the importance of goal setting in workers’ motivation. In particular, they have found that when workers are committed to challenging but attainable goals, their performance increases even if those goals are not directly linked to wages. In this paper, we have introduced goal setting in a principal agent model of managerial incentives. Agents care about goal setting because achieving those goals creates a sense of achievement and accomplishment that modifies their intrinsic motivation to work. We have shown that, in an optimal contract, more challenging objectives increase agents’ performance and that the goals set by the principal increase with the agent’s standard. Therefore, goals that are payoff irrelevant, since they do not directly affect agents’ extrinsic incentives, increase the principal’s profits. We have also shown that a mid-ranged standard gives the highest satisfaction to an agent and that a mid-ranged agent type could be the most satisfied among all the agent types. Therefore, being very demanding can be detrimental. There are some promising lines for future research. First of all, our goal commitment function is a very simple one; an agent is committed to a goal when it exceeds his personal standard sufficiently for him to consider the goal to be challenging. Psychologists have found that there are other determinants of goal commitment that should be studied in an economic model, such as the agents’ self-efficacy (i.e., ability confidence) and the agents’ participation in the goal setting processes (see Anderson et al., 2010; Bush, 1998). Moreover, if we consider a more realistic model with production uncertainty, an agent can be satisfied from trying hard even if the goal is not achieved. Similarly, the agent could be dissatisfied from not having tried hard enough because he suffers from self-control problems: being tempted to be lazy when deciding effort and suffering regret from not achieving a goal after production take place. Therefore, the principal could use assigned goals to attenuate workers’ self-control problems. This extension would link our model with the existing self-set goals models (Hsiaw, 2009, Kock and Nafziger, 2011a and Kock and Nafziger, 2011b) with present-biased preferences. A very interesting line of future research is to endogenize the personal standard parameter. There are several ways to do this. First, in a model with different abilities we can imagine that the agent’s standard is in part determined by his ability. Second, we can think that the personal standard is determined by the agent’s rational expectation about outcomes. This would provide a very good link between the present model with goal dependent preferences and the reference dependent utility from expectations literature (such as models with preferences à la Köszegi and Rabin (2006)). In fact goal setting can provide an additional explanation of the formation of reference states. For instance, with an experimental study Matthey (2010) finds evidence that apart from an individual’s own past, present and expected future outcomes and the outcomes of relevant others, reference states also depend on environmental factors that do not influence outcomes. Therefore, the kind of payoff irrelevant goals studied in this paper could affect reference states in a similar way, so an experimental study in the area is very appealing. Another topic would be to introduce competition in the model. If we consider that firms compete for workers, we should reconsider our result that very demanding (and hence productive) agents may be the least satisfied. With competition we have two opposite effects. On the one hand, as we have shown in this paper, very demanding workers may get lower satisfaction than lower types. But, on the other hand, firms compete for more demanding agents offering them more attractive offers (wages and goals), which has a positive effect on the satisfaction of very demanding agents. Finally, there is evidence that goal setting policies have more impact on agents’ performance as time goes by Ivancevich (1974) finds that in a manufacturing company a goal setting program significantly improves workers’ performance within 6 months after implementation. Therefore, it would be interesting to extend our model to allow for dynamic considerations. One possibility is to consider personal standards changing with past goals. Thus, after achieving a certain goal the agent’s personal standard increases so he will be more committed to higher goals in the future. This captures the intuitive idea of goal setting as a motivation tool to push the agent’s limits. When standards at any point depend on the goal-setting history, some interesting effects, like addition to goals, may arise.