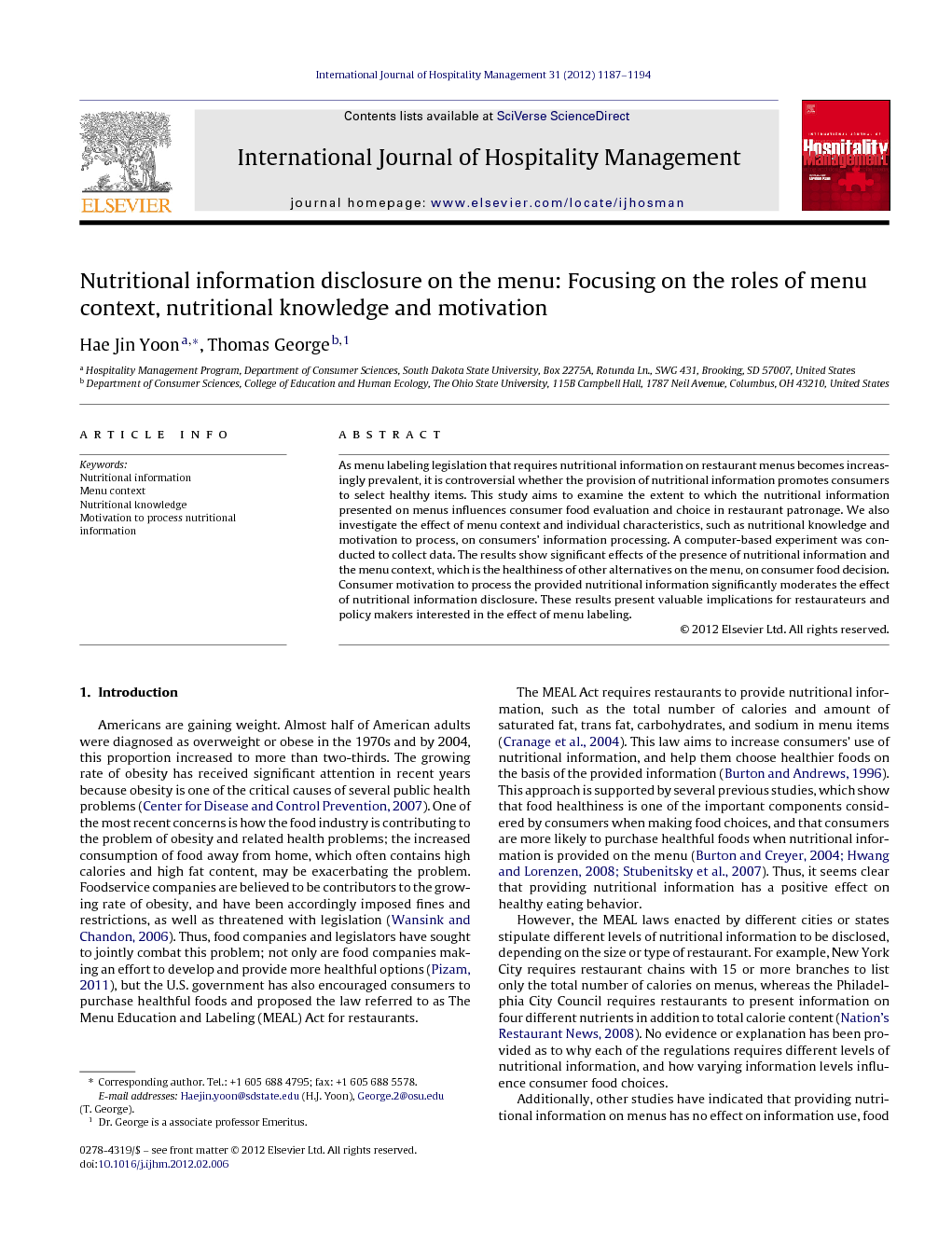 Americans are gaining weight. Almost half of American adults were diagnosed as overweight or obese in the 1970s and by 2004, this proportion increased to more than two-thirds. The growing rate of obesity has received significant attention in recent years because obesity is one of the critical causes of several public health problems (Center for Disease and Control Prevention, 2007). One of the most recent concerns is how the food industry is contributing to the problem of obesity and related health problems; the increased consumption of food away from home, which often contains high calories and high fat content, may be exacerbating the problem. Foodservice companies are believed to be contributors to the growing rate of obesity, and have been accordingly imposed fines and restrictions, as well as threatened with legislation (Wansink and Chandon, 2006). Thus, food companies and legislators have sought to jointly combat this problem; not only are food companies making an effort to develop and provide more healthful options (Pizam, 2011), but the U.S. government has also encouraged consumers to purchase healthful foods and proposed the law referred to as The Menu Education and Labeling (MEAL) Act for restaurants. The MEAL Act requires restaurants to provide nutritional information, such as the total number of calories and amount of saturated fat, trans fat, carbohydrates, and sodium in menu items (Cranage et al., 2004). This law aims to increase consumers’ use of nutritional information, and help them choose healthier foods on the basis of the provided information (Burton and Andrews, 1996). This approach is supported by several previous studies, which show that food healthiness is one of the important components considered by consumers when making food choices, and that consumers are more likely to purchase healthful foods when nutritional information is provided on the menu (Burton and Creyer, 2004, Hwang and Lorenzen, 2008 and Stubenitsky et al., 2007). Thus, it seems clear that providing nutritional information has a positive effect on healthy eating behavior. However, the MEAL laws enacted by different cities or states stipulate different levels of nutritional information to be disclosed, depending on the size or type of restaurant. For example, New York City requires restaurant chains with 15 or more branches to list only the total number of calories on menus, whereas the Philadelphia City Council requires restaurants to present information on four different nutrients in addition to total calorie content (Nation's Restaurant News, 2008). No evidence or explanation has been provided as to why each of the regulations requires different levels of nutritional information, and how varying information levels influence consumer food choices. Additionally, other studies have indicated that providing nutritional information on menus has no effect on information use, food evaluation, or food choices in a restaurant setting (Droms, 2006 and Stubenitsky et al., 2007). The lack of effect was attributed to the fact that people consider eating out where they are allowed to eat any food, regardless of health (Stubenitsky et al., 2007). Droms (2006) also suggested that people consider other important and influential components aside from health benefits; these factors include the taste of food or individual food preferences. Moreover, awareness and use of presented nutritional information may be influenced by consumers’ individual characteristics, such as motivation to perform healthy behavior, health consciousness, nutritional knowledge, and health status (Moorman, 1990). Thus, this study focuses on what level of nutritional information can best promote healthful food choices in a restaurant setting, and which individual characteristics can encourage consumers to process nutritional information and select healthier foods at a restaurant. More specifically, we seek to determine the moderating effects of factors such as nutritional menu context, motivation to process nutritional information, and nutritional knowledge.