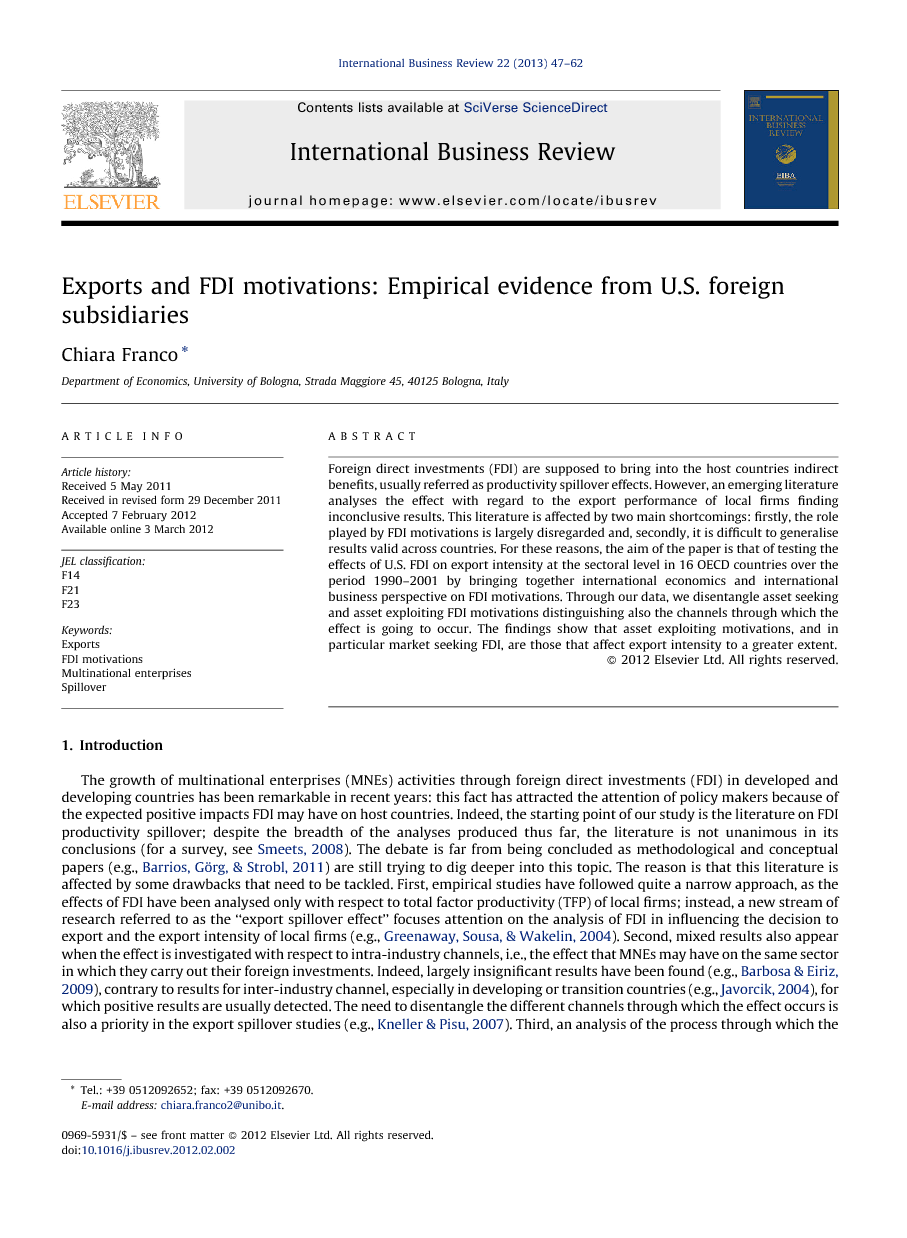 Foreign direct investments (FDI) are supposed to bring into the host countries indirect benefits, usually referred as productivity spillover effects. However, an emerging literature analyses the effect with regard to the export performance of local firms finding inconclusive results. This literature is affected by two main shortcomings: firstly, the role played by FDI motivations is largely disregarded and, secondly, it is difficult to generalise results valid across countries. For these reasons, the aim of the paper is that of testing the effects of U.S. FDI on export intensity at the sectoral level in 16 OECD countries over the period 1990–2001 by bringing together international economics and international business perspective on FDI motivations. Through our data, we disentangle asset seeking and asset exploiting FDI motivations distinguishing also the channels through which the effect is going to occur. The findings show that asset exploiting motivations, and in particular market seeking FDI, are those that affect export intensity to a greater extent

The growth of multinational enterprises (MNEs) activities through foreign direct investments (FDI) in developed and developing countries has been remarkable in recent years: this fact has attracted the attention of policy makers because of the expected positive impacts FDI may have on host countries. Indeed, the starting point of our study is the literature on FDI productivity spillover; despite the breadth of the analyses produced thus far, the literature is not unanimous in its conclusions (for a survey, see Smeets, 2008). The debate is far from being concluded as methodological and conceptual papers (e.g., Barrios, Görg, & Strobl, 2011) are still trying to dig deeper into this topic. The reason is that this literature is affected by some drawbacks that need to be tackled. First, empirical studies have followed quite a narrow approach, as the effects of FDI have been analysed only with respect to total factor productivity (TFP) of local firms; instead, a new stream of research referred to as the “export spillover effect” focuses attention on the analysis of FDI in influencing the decision to export and the export intensity of local firms (e.g., Greenaway, Sousa, & Wakelin, 2004). Second, mixed results also appear when the effect is investigated with respect to intra-industry channels, i.e., the effect that MNEs may have on the same sector in which they carry out their foreign investments. Indeed, largely insignificant results have been found (e.g., Barbosa & Eiriz, 2009), contrary to results for inter-industry channel, especially in developing or transition countries (e.g., Javorcik, 2004), for which positive results are usually detected. The need to disentangle the different channels through which the effect occurs is also a priority in the export spillover studies (e.g., Kneller & Pisu, 2007). Third, an analysis of the process through which the spillover effect occurs should take into account the heterogeneity of both local firms and MNEs strategies. This topic has been considered using different theoretical approaches, such as an international economics (IE) perspective (e.g., Beugelsdijk, Smeets, & Zwinkles, 2008) or international business (IB)-oriented approaches (e.g., Driffield and Love, 2007 and Marin and Sasidharan, 2010). In the export spillover studies, this aspect has been acknowledged without directly referring to a specific theoretical framework, intending only to account for the different effects coming from MNEs that are domestic market oriented and those that are export market oriented. Last, we acknowledge that the FDI spillover literature has been mainly confined to the analysis of single countries; as argued by Javorcik (2008), particular countries are going to attract only certain types of FDI with different spillover potential. For this reason, the analysis of the effects of the spillover process only in one country may result in a counterproductive exercise, as results cannot be easily generalised. With few exceptions (e.g., Bitzer, Geishecker, & Görg, 2008), no comparative analyses have been conducted with respect to the export spillover literature. The aim of the present paper is to analyse at the sectoral level the empirical relationship between various FDI motivations and export intensity over the period 1990–2001 in three medium–high-tech sectors. Data from the Bureau of Economic Analysis (BEA) provide information about the activities of U.S. foreign affiliates in 16 OECD host countries through which we can distinguish different FDI motivations. The contributions we make to the literature are manifold. First, we put together two strands of literature, FDI export spillover effect and FDI motivations that, at present, are evolving quite independently. Second, as FDI motivation can actually be examined under different theoretical perspectives, resulting in inconsistent measurement, we try to elaborate theoretically on this issue, inferring the motivations ex-ante, not ex-post. Third, we also attempt to uncover the channels through which the effect occurs, taking into account that different subsidiaries’ activities may generate different effects even with respect to the same FDI motivation. Fourth, we focus on a group of homogenous host countries because this enables us to offer some general results. We find evidence that horizontal FDI have a positive effect on the export intensity of medium–high-tech sectors in the OECD countries under consideration. However, we also find that the effect is mediated by workers’ skills in foreign subsidiaries and by the higher level of embeddedness that characterises market-seeking FDI. The paper is structured as follows. The second section reviews the literature on the impact of FDI on host countries. In this section, we take stock of the effect of productivity spillover by making some distinctions between the IE and IB approach toward FDI motivations. We also examine how this issue has been considered in the export spillover literature, to which this paper aims to contribute. In Section 3, to be better able to interpret empirical results, we propose some theoretical hypotheses. Section 4 describes the data and the empirical approach followed, Section 5 provides some comments on the results and Section 6 concludes, offering some policy implications and describing some limits of the study.

The main aim of our contribution has been to merge the literature about the FDI export spillover effect with the literature addressing the impact of FDI motivation on recipient countries, providing empirical evidence for some OECD countries examined over the 1990s in three medium–high-tech sectors. This type of study can help take a step toward clarifying the way through which the spillover mechanisms occur, at least from three points of view. First, by trying to reconcile the IE and IB perspectives on FDI motivations, we attempt to further disentangle the channels through which the effect is conveyed, accounting for both asset-seeking and asset-exploiting motivations. Second, this methodology allows us to examine spillover effects that can be conveyed through intra-industry channels. In most empirical studies, the channels through which the effect occurs are not accounted for, leading to inconclusive results. Third, the cross-country empirical application allows us to generalise results. Our results point to some interesting conclusions. First, we confirm that it is not possible to consider FDI as a homogenous external factor without taking into consideration MNEs’ heterogeneity. In particular, it is possible to recognise that market-seeking FDI may influence to a larger extent the export intensity of recipient countries than other FDI motivations. The greater effect coming from market-seeking FDI is found for all channels except the competition channel, for which we found an insignificant result, and the R&D channel, for which a mildly negative coefficient was expected. However, this result proves that greater export orientation on the part of MNEs, as in the case of resource-seeking or export platform FDI, is not relevant in enhancing export intensity of the domestic sectors; OECD countries are already part of the worldwide trade network and do not need to be helped in lowering sunk costs. Some limitations of the study need to be considered. First, we investigate the export spillover effect in the context of developed countries, finding results that may not hold for developing countries or low-tech sectors. Indeed, we think that two issues may differ when we analyse such effects in developed and developing countries: first, developed countries’ firms are endowed with higher technological capabilities that enable the spillover effect, and second, FDI motivations in developed countries and high-tech sectors may be extremely different from those in low-tech sectors and developing countries. Another limitation of the study is that we are taking into consideration only FDI coming from one home country, the U.S. Indeed, as found by Javorcik and Spatareanu (2011), the country of origin may affect the spillover potential. In fact, the country of origin and the FDI motivations may be intertwined; a country's endowment with specific technological capabilities may directly influence the types of FDI that will be conducted. Future research may well consider a comparison with different countries of origin and other sectors. Third, more effort should be directed at understanding the exact mechanisms behind the observed patterns. We think that starting from motivations and then considering the channels through which FDI spill over through the economy is a promising approach, but more precise definitions and theoretical elaborations of the spillover mechanism are needed. In particular, more attention should be devoted to the measurements of such mechanisms; for example, researchers should try to gather data on the actual flow of workers between MNEs and local firms or ask firm-specific questions to identify domestic suppliers of foreign customers. This approach would yield more reliable results, though much more detailed data are needed. Despite the study's limitations outlined above, some interesting policy implications can be singled out. Indeed, many countries offer FDI more favourable treatment than that given to domestic producers. Such policies are justified to the extent that the positive externalities generated by FDI represent a market failure, indicating the need to subsidise FDI. Our results encourage the conclusion that not all FDI are the same and that economic incentives need to be carefully designed. In particular, policy makers must consider whether to implement export promotion policies or policies to attract FDI that indirectly translate into higher export performance. In our sample, it may seem that only horizontal FDI should be encouraged, both through production or technological channels. However, policies should take into consideration which channel would allow market-seeking motivations to produce the greatest effect. What should be encouraged is the attraction of a more embedded type of FDI, which, as confirmed by the productivity spillover literature, may convey higher spillover effects with respect to the stimuli provided to the export activities. In addition, policies need to be designed to favour activities of subsidiaries that employ high-skilled workers, though this action could be quite difficult because these types of activities usually complement R&D activities that may have adverse effects on domestic exports. For this reason, host countries need to find appropriate instruments to counterbalance the two competing effects. Policies should address the insignificant results found when asset-seeking motivations are considered. MNEs investing abroad to gain access to further technological knowledge have less to offer to the local context, especially in the case of developed countries. This result, which holds especially for developed countries, points to the need of generating the suitable firm-level capabilities to grasp even from competence-creating subsidiaries some of the technological knowledge that may eventually leak out.