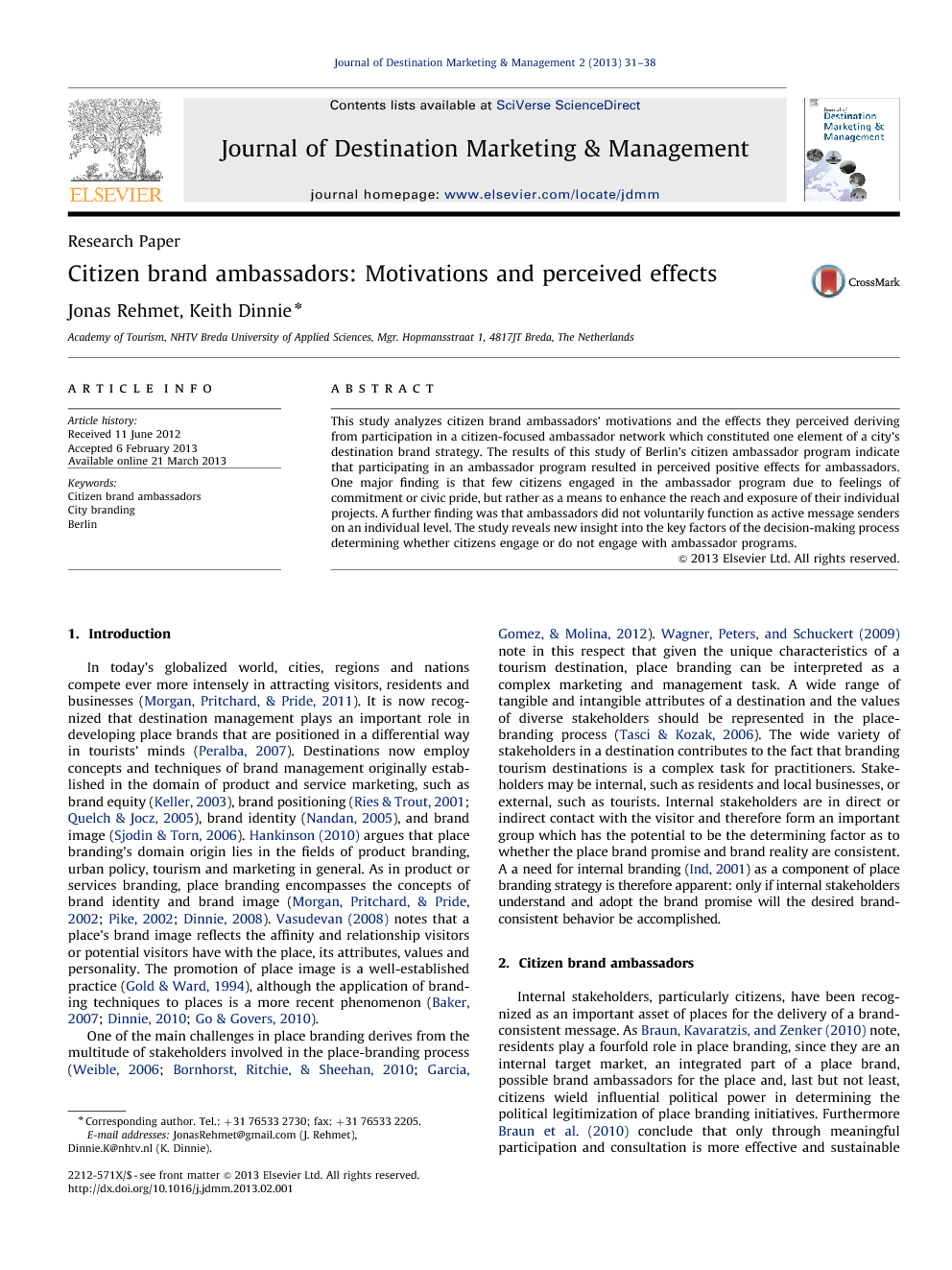 This study analyzes citizen brand ambassadors' motivations and the effects they perceived deriving from participation in a citizen-focused ambassador network which constituted one element of a city's destination brand strategy. The results of this study of Berlin's citizen ambassador program indicate that participating in an ambassador program resulted in perceived positive effects for ambassadors. One major finding is that few citizens engaged in the ambassador program due to feelings of commitment or civic pride, but rather as a means to enhance the reach and exposure of their individual projects. A further finding was that ambassadors did not voluntarily function as active message senders on an individual level. The study reveals new insight into the key factors of the decision-making process determining whether citizens engage or do not engage with ambassador programs.

In today's globalized world, cities, regions and nations compete ever more intensely in attracting visitors, residents and businesses (Morgan, Pritchard, & Pride, 2011). It is now recognized that destination management plays an important role in developing place brands that are positioned in a differential way in tourists' minds (Peralba, 2007). Destinations now employ concepts and techniques of brand management originally established in the domain of product and service marketing, such as brand equity (Keller, 2003), brand positioning (Ries and Trout, 2001 and Quelch and Jocz, 2005), brand identity (Nandan, 2005), and brand image (Sjodin & Torn, 2006). Hankinson (2010) argues that place branding's domain origin lies in the fields of product branding, urban policy, tourism and marketing in general. As in product or services branding, place branding encompasses the concepts of brand identity and brand image (Morgan et al., 2002, Pike, 2002 and Dinnie, 2008). Vasudevan (2008) notes that a place's brand image reflects the affinity and relationship visitors or potential visitors have with the place, its attributes, values and personality. The promotion of place image is a well-established practice (Gold & Ward, 1994), although the application of branding techniques to places is a more recent phenomenon (Baker, 2007, Dinnie, 2010 and Go and Govers, 2010). One of the main challenges in place branding derives from the multitude of stakeholders involved in the place-branding process (Weible, 2006, Bornhorst et al., 2010 and Garcia et al., 2012). Wagner, Peters, and Schuckert (2009) note in this respect that given the unique characteristics of a tourism destination, place branding can be interpreted as a complex marketing and management task. A wide range of tangible and intangible attributes of a destination and the values of diverse stakeholders should be represented in the place-branding process (Tasci & Kozak, 2006). The wide variety of stakeholders in a destination contributes to the fact that branding tourism destinations is a complex task for practitioners. Stakeholders may be internal, such as residents and local businesses, or external, such as tourists. Internal stakeholders are in direct or indirect contact with the visitor and therefore form an important group which has the potential to be the determining factor as to whether the place brand promise and brand reality are consistent. A a need for internal branding (Ind, 2001) as a component of place branding strategy is therefore apparent: only if internal stakeholders understand and adopt the brand promise will the desired brand-consistent behavior be accomplished.

This paper contributes to theoretical and practical advancement in the destination management domain by investigating the motivations and perceived effects experienced by residents who have participated in a destination-brand strategy as citizen brand ambassadors. Since previous research on this issue has been primarily concerned with the place branding practitioner's point of view (Andersson & Ekman, 2009), this study provides an alternative approach and employs the perspective of the ambassador, investigating ambassadors' motivations and perceived effects deriving from the campaign in which the ambassadors have participated. The results of our study of the ambassador network in question lead to the conclusion that the network in its early stages has been primarily used as a communication device. This is in line with findings from Andersson and Ekman (2009), who concluded that coordinators put an emphasis on the communicative aspect of the network in its early stages. However, Andersson and Ekman (2009) also stress the development resources of ambassador networks as networks mature and consolidate. In the case of the Berlin citizen brand ambassador network, it is not apparent whether there is a desire by the city policymakers to continue to manage and maintain the ambassador network. However, interviewees in our study expressed a strong interest in further involvement in the ambassador network. Currently there appears to be a lack of intensive collaboration between campaign team and existing ambassadors, leaving great internal potential to waste. Several respondents mentioned that no specific tasks or duties were assigned to the individual ambassadors. Additionally, interviewees mentioned that they had not been instructed by the campaign team what it entails to act as an ambassador. In light of this study's findings, the following recommendations are proposed. There is a clear and urgent need for clarification of what exactly the city expects from its citizen ambassadors. Participants in the citizen ambassador program appeared to be motivated and ready to contribute to the campaign, but felt a sense of disappointment that they received little guidance as to what exactly their ambassador role should entail. Due to the fact that several participants' primary motivations were largely focused on enhancing the press exposure of projects or to gain individual advantages, it is recommended to use these motivations for further strategies in the ambassador network. Additionally, most respondents indicated that they had an interest in interacting with other ambassadors within the campaign. City policymakers should take into consideration these expressed aspirations for interaction, in order to fully exploit the potential effect of the citizen brand ambassador program.