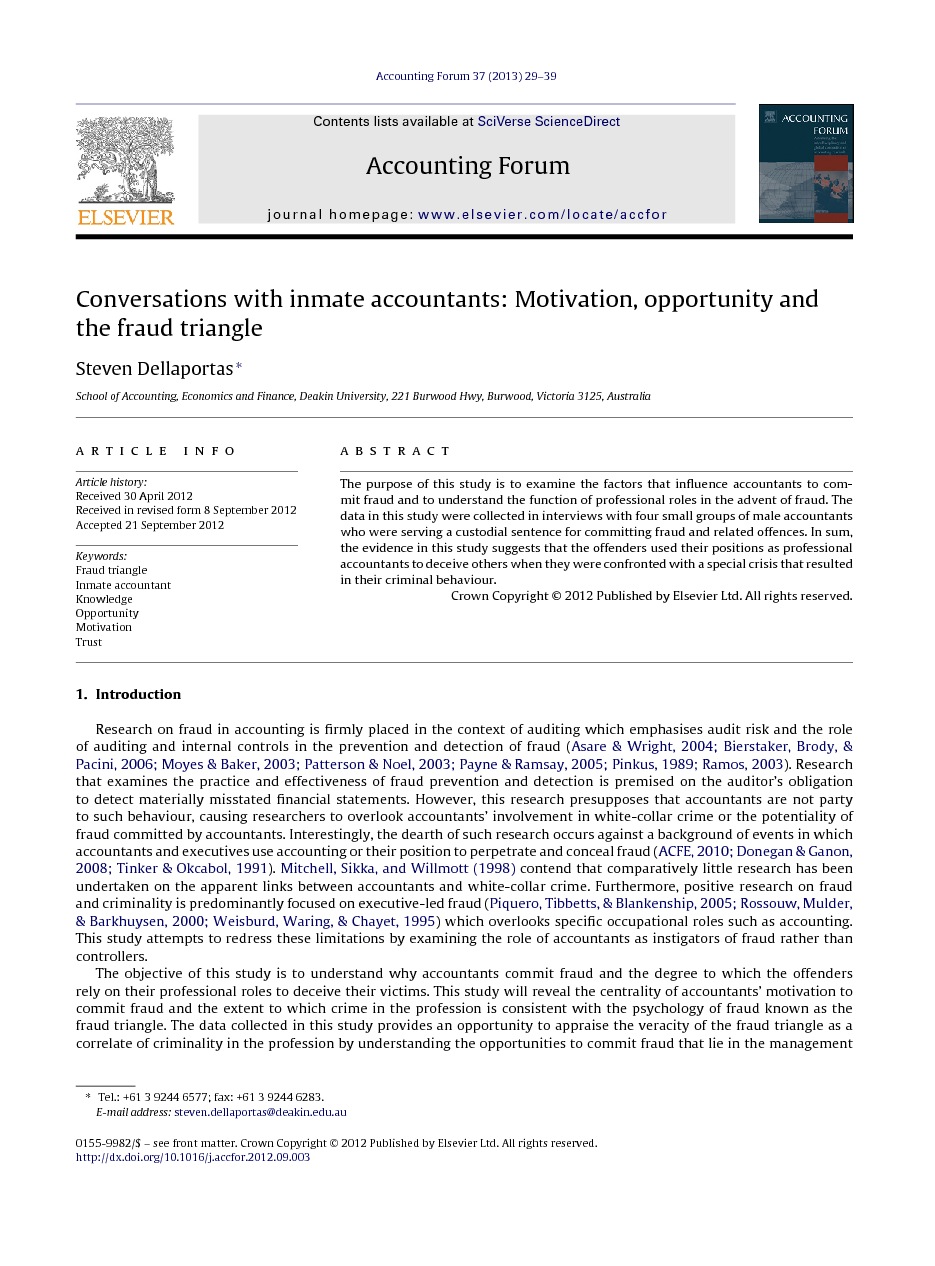 The purpose of this study is to examine the factors that influence accountants to commit fraud and to understand the function of professional roles in the advent of fraud. The data in this study were collected in interviews with four small groups of male accountants who were serving a custodial sentence for committing fraud and related offences. In sum, the evidence in this study suggests that the offenders used their positions as professional accountants to deceive others when they were confronted with a special crisis that resulted in their criminal behaviour.

Research on fraud in accounting is firmly placed in the context of auditing which emphasises audit risk and the role of auditing and internal controls in the prevention and detection of fraud (Asare and Wright, 2004, Bierstaker et al., 2006, Moyes and Baker, 2003, Patterson and Noel, 2003, Payne and Ramsay, 2005, Pinkus, 1989 and Ramos, 2003). Research that examines the practice and effectiveness of fraud prevention and detection is premised on the auditor's obligation to detect materially misstated financial statements. However, this research presupposes that accountants are not party to such behaviour, causing researchers to overlook accountants’ involvement in white-collar crime or the potentiality of fraud committed by accountants. Interestingly, the dearth of such research occurs against a background of events in which accountants and executives use accounting or their position to perpetrate and conceal fraud (ACFE, 2010, Donegan and Ganon, 2008 and Tinker and Okcabol, 1991). Mitchell, Sikka, and Willmott (1998) contend that comparatively little research has been undertaken on the apparent links between accountants and white-collar crime. Furthermore, positive research on fraud and criminality is predominantly focused on executive-led fraud (Piquero et al., 2005, Rossouw et al., 2000 and Weisburd et al., 1995) which overlooks specific occupational roles such as accounting. This study attempts to redress these limitations by examining the role of accountants as instigators of fraud rather than controllers. The objective of this study is to understand why accountants commit fraud and the degree to which the offenders rely on their professional roles to deceive their victims. This study will reveal the centrality of accountants’ motivation to commit fraud and the extent to which crime in the profession is consistent with the psychology of fraud known as the fraud triangle. The data collected in this study provides an opportunity to appraise the veracity of the fraud triangle as a correlate of criminality in the profession by understanding the opportunities to commit fraud that lie in the management and manipulation of professional roles. The findings suggest that it was the professional dimensions of knowledge and trust in particular that characterised the crimes in this study. It is the dimensions that relate to the occupation of the offenders, rather than the offence, that this author regards as a matter of some significance. This study is expected to provide a number of benefits to the community of accountants that can suffer long term damage to its social relations from deviant behaviour in the profession. A better understanding of the causes of fraudulent behaviour in the profession will help members to recognise the signs that give rise to the potentiality for fraud. Similarly, identifying the causes of fraudulent behaviour allows professional associations to incorporate into their professional development programs the skills required to alert members to the difficulties they may face in practice and articulate strategies to deal with such problems. Furthermore, a study that conveys the consequences of fraudulent behaviour will have important deterrent effects on would-be offenders. Generalisations about the extent of crime in the profession and whether it is regarded as of some significance are difficult because of the elusiveness of the data. However, irrespective of the extent of crime in the profession, it remains an important topic that has significant implications for victims of fraud as well as the collective reputation of the profession. The remainder of this paper is structured as follows. The theoretical framework that relies on the psychological model developed to explain why people commit fraud (known as the ‘fraud triangle’) is outlined in section two of this paper. Section 3 describes the data collection process which relies on discourse analysis from group discussions with professional accountants serving a custodial sentence for fraud-related offences. Section 4 reports the findings followed by a discussion of the findings in Section 5. The final section concludes the paper.

The key elements of the fraud triangle include an offender with the motivation to steal, a perceived opportunity to commit a fraud and avoid detection, and a rationalisation to act illegally. The three elements of the fraud triangle were present in the fraudulent acts undertaken by the offenders who participated in this study. Rather than one dominant motive, the offenders in this study were influenced by strains that were broadly classified into financial (failed business and investments, greed – inmates #3, #4, #5, #6, #7, #9, and #10) and non-financial motives (revenge, vices and greed – inmates #1, #2, and #8). These motives were then mixed with personal issues that further clouded judgement. Trusted relationships with clients and the absence of proper business administration created opportunities to commit fraud that were rationalised by displacing blame, the perception that no-one was hurt, and believing that the stolen money would one day be repaid. In sum, the evidence in this study suggests that the offenders relied on their positions as professional accountants to deceive others when they were confronted with a special crisis that resulted in criminal behaviour. The discussion in this paper highlights the strength of opportunity in the advent of fraud suggesting that opportunity rather than motivation is a better predictor of deviant behaviour as well as being the key to controlling fraud. That is not to say a sufficiently motivated person will not pursue illegal behaviour, but it is opportunity that allows a would-be offender to seek a solution through illegitimate means. The implication of this discussion calls for an orientation of research that is focused on controlling fraud not by eradicating motivation but by restricting opportunity. Whilst fraud may never be eliminated, a proactive approach to dealing with fraud can dramatically reduce the vulnerability of victims to unscrupulous practitioners. Further research should focus on limiting opportunity through avenues that include education, legal regulation, and the ethics of fiduciary relationships. Additional research exploring the complexity or dimensions of opportunity and an expanded fraud triangle will result in a better understanding of the conditions that predispose accountants (and other professionals) to commit fraud and how to prevent it. The sample of inmates who participated in this study was small in number, self-selected and restricted to offenders serving a custodial sentence. The interview protocol and the time constraint imposed by prison officials provided limited opportunity to pursue follow-up or probing questions. Furthermore, by relying on inscription as the primary method of data recording, the findings are reported in a journalistic fashion which limits the rigour of the research methodology adopted in this paper. Noting these limitations, caution should be exercised in interpreting the findings of this study which should be restricted to the sample and the context in which this study was undertaken, thus limiting its overall generalisability. In spite of these limitations, understanding why accountants commit fraud is necessary to manage deviant behaviour in the profession, particularly if opportunities in the profession are assumed to be ubiquitous. Acknowledgements