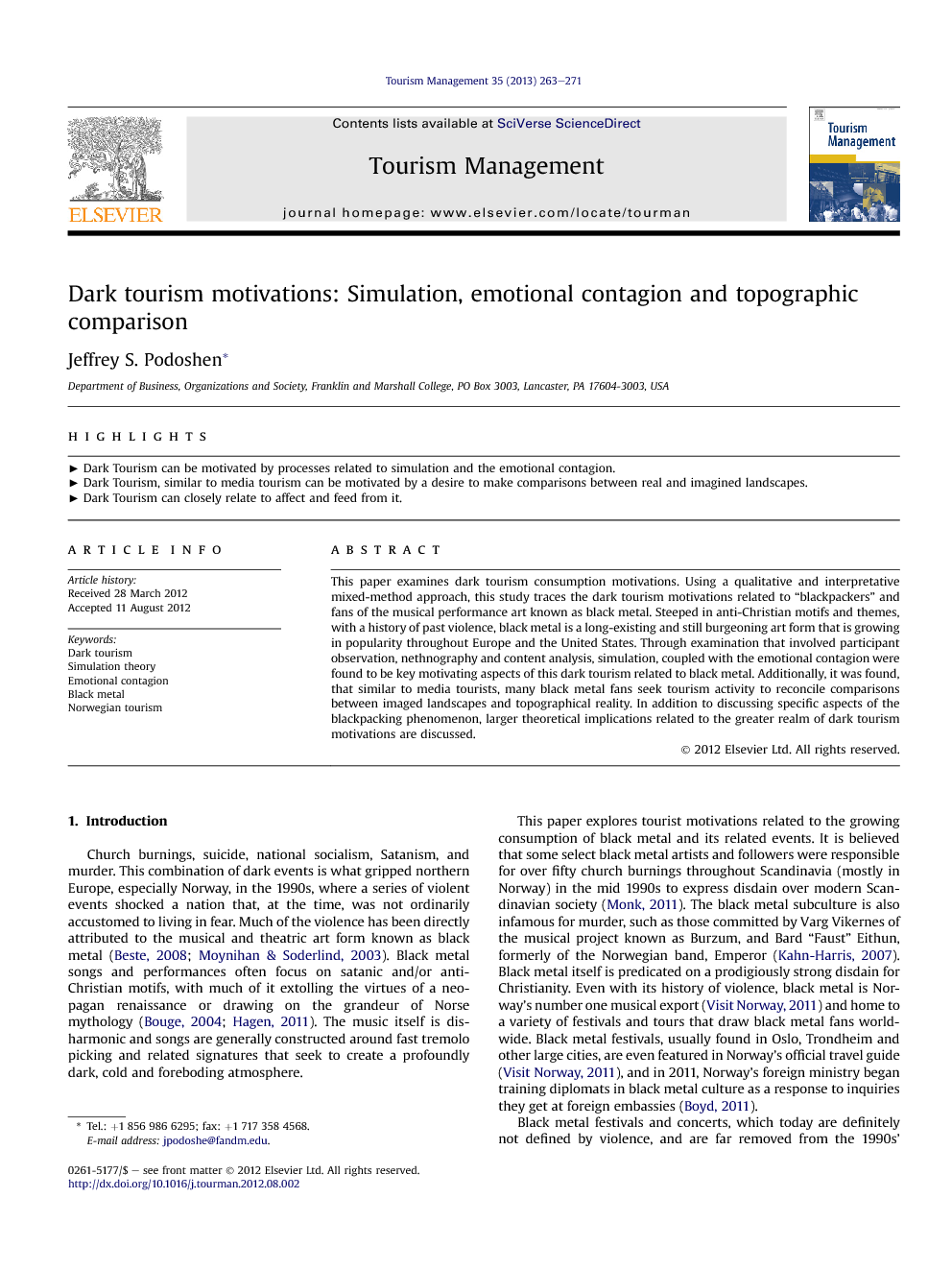 This paper examines dark tourism consumption motivations. Using a qualitative and interpretative mixed-method approach, this study traces the dark tourism motivations related to “blackpackers” and fans of the musical performance art known as black metal. Steeped in anti-Christian motifs and themes, with a history of past violence, black metal is a long-existing and still burgeoning art form that is growing in popularity throughout Europe and the United States. Through examination that involved participant observation, nethnography and content analysis, simulation, coupled with the emotional contagion were found to be key motivating aspects of this dark tourism related to black metal. Additionally, it was found, that similar to media tourists, many black metal fans seek tourism activity to reconcile comparisons between imaged landscapes and topographical reality. In addition to discussing specific aspects of the blackpacking phenomenon, larger theoretical implications related to the greater realm of dark tourism motivations are discussed.

This paper looked to examine dark tourism motivations from the consumption perspective. Within the context of black metal tourism, from our study, it was found that simulation, linked with the emotional contagion were key motivating aspects of dark tourism. Further, our data indicated that, similar to media tourists, a great number of black metal tourists attempt to reconcile comparisons between imagined landscapes and topographical reality. This study of black metal related dark tourism will hopefully spark an interest in further delving into dark tourism consumption motivations. Specifically, it is hoped that other studies related to simulation and emotion, coupled with landscape comparison are spurred by the research and thoughts presented here. While the prospect of examining humans consuming tourism experiences for the sake of emotional stimulation and affect that many would perceive as negative; this foreboding, dark and cold atmosphere should not undermine the need of this type of exploration. Compared to many types of tourism studies, dark tourism examination is still in its early stages and will require exploration in a variety of contexts in order to begin to yield theory that is confidently generalizable. Much remains to be explored, and scholars looking to build theory in this realm must be unafraid to delve into both gruesome and depressive field research that may turn away many. Netnography, as one of our methods, has significant limitations. As mentioned in Podoshen and Hunt (2011), discourse among black metallers occurs in a computer-mediated environment and this means that some people may utilize a greater level of control over their self-image as compared to a non-mediated environment. Further, anonymity is easy in the virtual world, making it difficult to understand context and demographic information about those who perpetuate the comments on message boards. Taken to the extreme, there is the potential for misrepresentation. With this in mind, making generalizations about groups using online communities for data can be limited. We attempted to minimize this limitation by utilizing two additional methods in our study. Additionally, dark tourism study should continue to embrace the underlying psychological motivations behind tourism demand. Much of this psychologically based theory is housed outside of the boundaries of traditional tourism scholarship. A great deal of the work on simulation theory and the emotional contagion stems from psychology and film/media studies, with some integration from marketing and consumer studies. In this respect, tourism scholars must be willing to examine tourism phenomena from a blended and/or bridged ontological perspective. Blending and bridging knowledge, literature and theory from a variety of realms – in our case – media studies and psychology, with tourism theory, allows for both a richer context of phenomological exploration as well as an enhanced ability to construct new theoretical dimensions. Here, tourism study that examines subculture should look beyond the particular variables that relate to the cultural context of the tourism phenomena and delve into psychological motivations that may exist in tandem with the cultural. Dark tourism scholarship would benefit from more work that seeks novel constructs, insights and new theory about tourism motivations that generalize beyond subcultural context and specific heritage-related factors. The study of dark tourism motivations is still in its early stages. This particular study is but one example in a vast arena. It is urged that future researchers examine dark tourism motivations in other venues, and in different parts of the world. Black metal is a subculture firmly entrenched in Europe, parts of the United States and Latin America, therefore generalizations made about dark tourism motivations related to black metal may not hold forth in different parts of the world such as Asia or Africa. Multiple comparative case studies of similar behavior and motivation should be enacted in order to add to the ideas and interpretations provided here. Additionally, while this study undertook multiple methods, each of the methods utilized here is qualitative and interpretative in nature. Scholars may wish to use other types of methods to study dark tourism and its related behaviors in a greater context, both inside and outside of the interpretative realm that will eventually lead to greater generalizability and insight inside the burgeoning dark tourism realm.