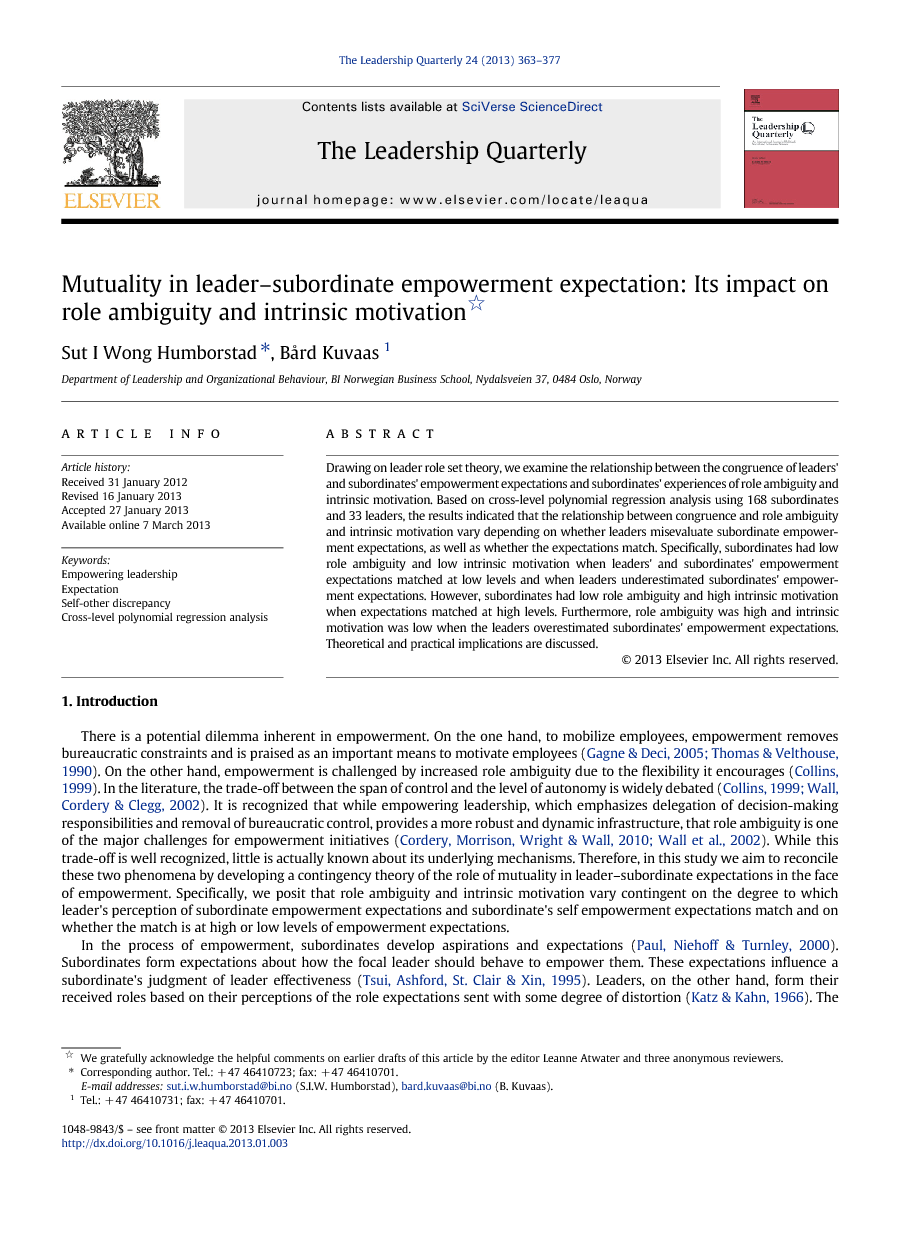 Some of the values obtained in the surface analysis for the dependent variables fell outside of the scale range, i.e., 1 to 5, and the interpretation of the results was only based on the portion of the surface that lies above the bivariate distribution of X and Y. This might imply that the findings are less stable. However, given the relative small sample size, i.e., 168 subordinates and 33 leaders, the significant results obtained are considerable. Still, attention should be paid to the potential weaknesses in terms of reliability. Moreover, the findings of the present study are based on cross-sectional data and a cross-sectional design cannot examine the causality of the relationships studied. Also, the stability of expectation is a topic of debate in expectation disconfirmation theory (Irving & Meyer, 1994). Whether leader empowerment expectation, subordinate empowerment expectation, and individual and organizational outcomes are reciprocally related would therefore be an interesting topic for future research. Longitudinal studies are recommended in order to investigate the potential reciprocal nature over time. This study focused on the mutuality of leaders' and subordinates' ratings of subordinate empowerment expectations. An interesting avenue for future research would be to investigate whether the leaders' reciprocity of subordinates' empowerment expectations would also have an effect on subordinates' outcomes (Dabos & Rousseau, 2004). Future investigation on this issue is warranted. Moreover, previous studies in the self-other agreement literature have provided us with evidence on a wide range of antecedents, such as raters' biographical characteristics, their cognitive ability and the contextual factors that could affect self-other agreement/disagreement (Fleenor et al., 2010). Although we included a wide set of demographic variables to control for their potential influence on role ambiguity and intrinsic motivation, we cannot exclude the possibility that the inferences claimed could be attributed to other variables. As noted by an anonymous reviewer, subordinates often fail to make clear distinctions about different leader behaviors as evidenced by the findings in the 360° literature wherein different leader attributes are often collapsed into a single scale. Accordingly, a research opportunity that deserves more attention is to investigate whether our findings are applicable to other and more generalized leader expectation gaps. Despite the merits of this question, however, a study by Pearce and Sims (2002) examined team effectiveness across various leadership styles including aversive, directive, transactional, transformational, and empowering leader behaviors. They found that these leadership styles were distinct from each other and that empowering leadership was most effective. Moreover, our theorizing leads to the potential dilemma inherent in empowerment (increased autonomy versus role ambiguity), to which we consider the alleged leader–subordinate empowerment expectation gaps particularly relevant. Even though our sample may have been appropriate with respect to observing empowerment expectation gaps between leaders and subordinates due to the recent structural change, it remains an empirical question whether the gaps are large enough in other organizations to impact on employee outcomes. Accordingly, whether our findings can be generalized needs to be tested by research in other organizations. Finally, since we investigated constructs that offer few alternatives to self-reported data, future research should investigate employee outcomes that can be measured by other sources (e.g., peers, managers, or measures of objective performance, if available). In conclusion, our study adds to the growing body of empowerment research by introducing empowerment expectation gaps. Prior empowerment research has revealed a robust and positive relationship between empowerment and important employee outcomes. By investigating the leader–subordinate empowerment expectation gap, we can probably explain more variances in such outcomes, as evidenced in this study by role ambiguity and intrinsic motivation.