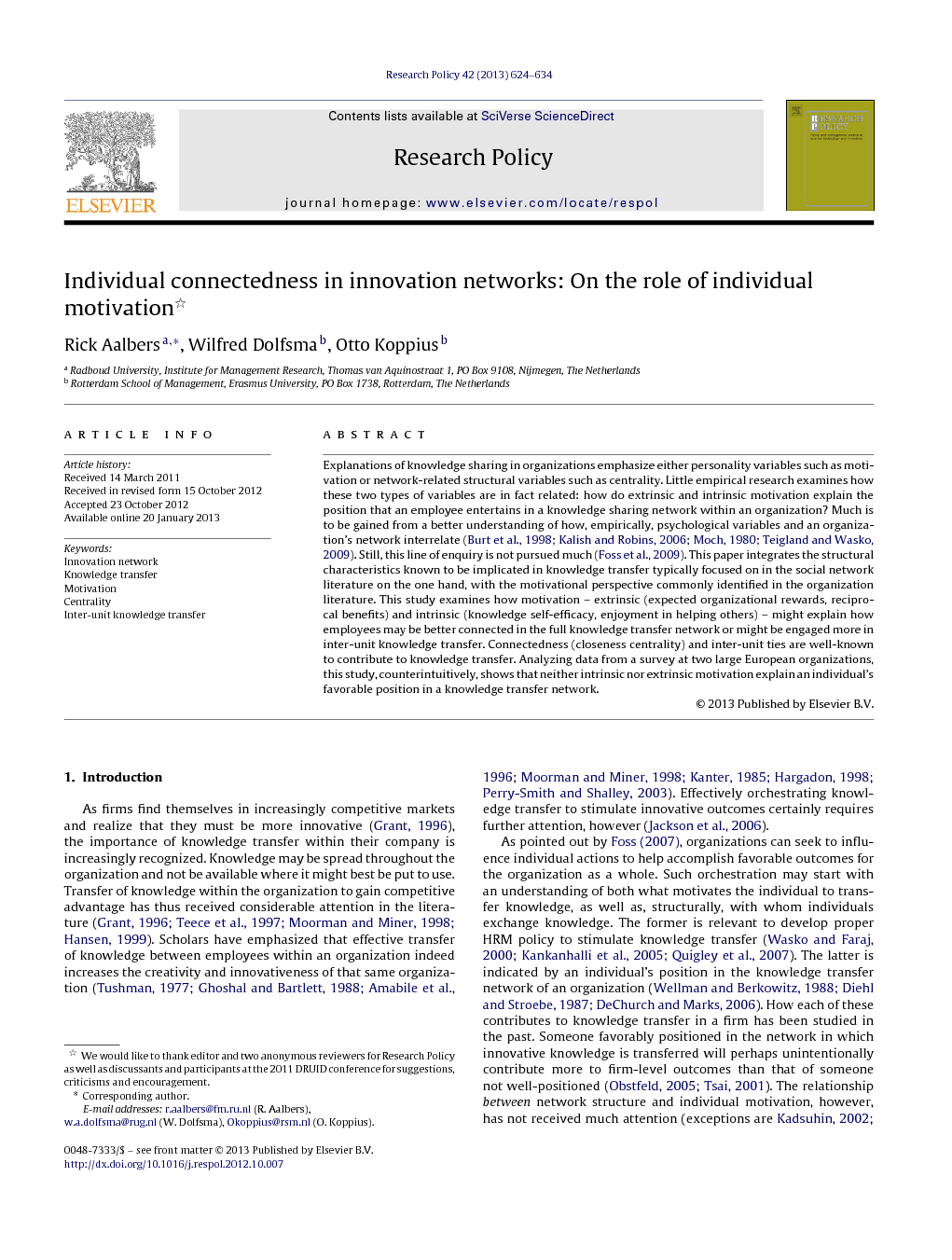 Explanations of knowledge sharing in organizations emphasize either personality variables such as motivation or network-related structural variables such as centrality. Little empirical research examines how these two types of variables are in fact related: how do extrinsic and intrinsic motivation explain the position that an employee entertains in a knowledge sharing network within an organization? Much is to be gained from a better understanding of how, empirically, psychological variables and an organization's network interrelate (Burt et al., 1998, Kalish and Robins, 2006, Moch, 1980 and Teigland and Wasko, 2009). Still, this line of enquiry is not pursued much (Foss et al., 2009). This paper integrates the structural characteristics known to be implicated in knowledge transfer typically focused on in the social network literature on the one hand, with the motivational perspective commonly identified in the organization literature. This study examines how motivation – extrinsic (expected organizational rewards, reciprocal benefits) and intrinsic (knowledge self-efficacy, enjoyment in helping others) – might explain how employees may be better connected in the full knowledge transfer network or might be engaged more in inter-unit knowledge transfer. Connectedness (closeness centrality) and inter-unit ties are well-known to contribute to knowledge transfer. Analyzing data from a survey at two large European organizations, this study, counterintuitively, shows that neither intrinsic nor extrinsic motivation explain an individual's favorable position in a knowledge transfer network.

As firms find themselves in increasingly competitive markets and realize that they must be more innovative (Grant, 1996), the importance of knowledge transfer within their company is increasingly recognized. Knowledge may be spread throughout the organization and not be available where it might best be put to use. Transfer of knowledge within the organization to gain competitive advantage has thus received considerable attention in the literature (Grant, 1996, Teece et al., 1997, Moorman and Miner, 1998 and Hansen, 1999). Scholars have emphasized that effective transfer of knowledge between employees within an organization indeed increases the creativity and innovativeness of that same organization (Tushman, 1977, Ghoshal and Bartlett, 1988, Amabile et al., 1996, Moorman and Miner, 1998, Kanter, 1985, Hargadon, 1998 and Perry-Smith and Shalley, 2003). Effectively orchestrating knowledge transfer to stimulate innovative outcomes certainly requires further attention, however (Jackson et al., 2006). As pointed out by Foss (2007), organizations can seek to influence individual actions to help accomplish favorable outcomes for the organization as a whole. Such orchestration may start with an understanding of both what motivates the individual to transfer knowledge, as well as, structurally, with whom individuals exchange knowledge. The former is relevant to develop proper HRM policy to stimulate knowledge transfer (Wasko and Faraj, 2000, Kankanhalli et al., 2005 and Quigley et al., 2007). The latter is indicated by an individual's position in the knowledge transfer network of an organization (Wellman and Berkowitz, 1988, Diehl and Stroebe, 1987 and DeChurch and Marks, 2006). How each of these contributes to knowledge transfer in a firm has been studied in the past. Someone favorably positioned in the network in which innovative knowledge is transferred will perhaps unintentionally contribute more to firm-level outcomes than that of someone not well-positioned (Obstfeld, 2005 and Tsai, 2001). The relationship between network structure and individual motivation, however, has not received much attention (exceptions are Kadsuhin, 2002, Kalish and Robins, 2006 and Teigland and Wasko, 2009). Researchers commonly ignore how differences between individual might affect organizational network usage and benefits (Anderson, 20081). Nevertheless the structural patterns of relationships that emerge in organizations and form the social infrastructure for the transfer of innovative knowledge unavoidably implicate human psychology ( Moreno, 1961 and Simmel, 1950). In this paper we study how individual motivation may explain an individual's position in the structure of the network in which innovative knowledge is transferred. As such we aim to generate further insights into the psychology of the intra-organizational networks that facilitate the transfer of innovative knowledge. Although studies on the influence of intrinsic and extrinsic motivation on individuals’ knowledge sharing behavior are not new (e.g. Amabile, 1993, Hung et al., 2011 and Kankanhalli et al., 2005), scholars have only begun to explore the effect of individual psychological differences on network structures (Klein et al., 2004 and Anderson, 2008). The number of different issues addressed remains rather limited which may in part be due to the difficulty of collecting relevant data. The question as to how individual differences predispose actors to position themselves in a network of relations thus has not received a persuasive answer as a result. Social network researchers seldom discuss the effects of individual psychological differences on network structure and particularly not in the context of knowledge transfer, while scholars in the field of HRM seldom consider social networks (Mehra et al., 2001, Minbaeva et al., 2003 and Kaše et al., 2009). Although personality characteristics have occasionally been linked to network position (a.o. Burt et al., 1998, Kalish and Robins, 2006, Klein et al., 2004, Oh and Kilduff, 2008 and Burt et al., 2000), motivation has not been investigated in more detail recently (with Foss et al., 2009 as a notable exception). This is somewhat surprising as the seminal work of a.o. Moreno (1961) and Simmel (1950) already emphasized the relevance of linking social structures and psychological processes. And even although more recent work has begun to link motivation to knowledge sharing (a.o. Wasko and Faraj, 2000, Kankanhalli et al., 2005 and Quigley et al., 2007), these studies continue to ignore the organizational network perspective. This study explicitly investigates the way in which motivation explains an individual's connectedness in the organizational knowledge transfer network, linking the structural patterns of relationships that emerge in organizations with human psychology. We use the broadly accepted psychological construct of intrinsic and extrinsic motivation (Vallerand, 1997, Osterloh and Frey, 2000 and Kankanhalli et al., 2005) to examine whether individuals with certain predispositions are indeed (1) better connected than others in a knowledge transfer network, in terms of closeness centrality, or (2) more engaged in inter-unit knowledge transfer. Individuals that are well-connected within the full knowledge transfer network of an organization, for instance, contribute significantly more to beneficial outcomes including to innovative knowledge transfer in particular (Nerkar and Paruchuri, 2005). We use the concept of closeness centrality to indicate the individual's position in the full knowledge transfer network, rather than merely observing her immediate connections. The connections an individual has may be within the own unit, while also knowledge transferred from other units, crossing unit boundaries, is believed to contribute to innovation in an important way (Burt, 2004 and Aalbers et al., forthcoming). We thus also determine how individual motivation might positively influence her tendency to be involved in inter-unit knowledge transfer. By relating network structure elements to motivational variables, this paper thus contributes significantly to the understanding of knowledge transfer within organizations and potentially benefits corporate innovation policies aimed at increasing employee participation in knowledge transfer and innovation.

Connectedness and inter-unit ties in the knowledge transfer network are both, separately, known to allow individuals to contribute to innovation (Burt, 1992 and Tsai, 2001). The literature on people's willingness to exchange knowledge suggests that individuals’ motivation should also be expected to be an important explanatory for one's favorable position in an innovative knowledge transfer network, but fails to investigate this important claim (Anderson, 2008). We empirically investigate the role of intrinsic and extrinsic motivation on one's overall connectedness and one's diversity of ties in the intra-organizational innovation network. Analyzing data for the full network where innovative knowledge is transferred between individuals in two separate innovative companies we present unexpected results. Intrinsic nor extrinsic motivation plays a role in determining an individual's cross-unit knowledge transfer. The effect of individuals’ intrinsic or extrinsic motives on connectedness in the overall network (closeness centrality) are rather mixed. We thus find no indication that individual motivation – extrinsic or intrinsic – favorably influences an individual's position in a network where innovative knowledge is transferred. Motivation to be involved in knowledge transfer is thus different from motivation to position oneself favorably in the network in which innovative knowledge is transferred. The number of ties already maintained seems to prevent an individual from having cross-unit ties, as one would expect drawing on costs of communication considerations (cf. Reagans and McEvily, 2003). The same does not hold for being well-connected in the whole network, however, as evidenced by the findings for closeness centrality. Given that an individual is dependent on possibly distant others to maintain a path for knowledge transfer to him to persist, the costs of communication is not (fully) born by her, even when the diversity of input thus received can be larger than from immediate cross-unit ties one maintains oneself. How exactly communication costs are implicated in an explanation of positioning in a knowledge transfer network is left for further research. In addition, the mutually interdependent nature of motivations, actions and positions in a social environment may need to be more explicitly incorporated in an analysis in future research (cf. Teigland and Wasko, 2009). Including reciprocal benefits as an extrinsic motivator (Lin, 2007 and Kowal and Fortier, 1999) might not adequately recognize the interdependencies and socially embedded exchange or transfer of knowledge over time (Bouty, 2000 and Ensign, 2009). It might be more important for partners in knowledge transfer to have valuable knowledge to exchange (so as to call in a return favor later) than what motivates them to exchange in the first place (Bouty, 2000 and Ensign, 2009, e.g. at p. 103). As evidenced from the differing findings for the control variables included, organizationally contingent factors may play an important role (cf. Lin, 2007). The effect of the variables Gender (Table 2 and Table 3) and of Unit membership (Table 3) differs substantially by company. The extent to which organizational fault lines (Bezrukova et al., 2009) differ between organizations can thus be significant, something that a cross-sectional study without a focus on social networks would not necessarily notice. Exactly how this additional psychological factor relates to social networks needs to be studied in future research. Our study thus contributes to the understanding of intra-organizational transfer of innovative knowledge and may steer away management attention from too much attention to individuals’ motives to others avenues for intervention. Management interventions have been found to hurt firm innovativeness (e.g. Mellahi and Wilkinson, 2008 and Shah, 2000). Although managerial interventions are daily routine especially in large companies, and involve substantial allocation of resources, studies on the effectiveness of managerial interventions are few and far between (Okhuysen and Bechky, 2009, p. 482). If and when management is keen to sustain the structural features of a knowledge transfer network, it may not want to focus too much exclusively on individuals’ motivations our study suggests. Innovation policy may thus fruitfully focus in particular on other individual characteristics such as skills (cf. Kaše et al., 2009) or on routines to be established in a firm (Zollo and Winter, 2002 and van Driel and Dolfsma, 2009). While a main strength of this paper is the analysis of data of actual knowledge transfer in multiple firms, so firmer conclusions may be drawn than those conducted previously under controlled setting of an experiment in which, e.g. students participate (Quigley et al., 2007), nevertheless the study also holds limitations. First, we are not in a position to offer firm evidence for the causality of the findings presented. We need to rely on theory for that to some degree. Second, the conceptual framework is not inclusive of all the possible variables that could be related to innovative knowledge transfer, such as corporate reward system or corporate culture. In our study, we have rather focused on factors that have conceptual meaning beyond the idiosyncrasies of the firms included. We do stress that the knowledge sharing conditions in this study are strongly focused on the transfer of innovative knowledge. Few previous studies have this focus, limiting the comparability of our findings, in part because of the difficulties in collecting this type of data. It might be that the role of motivation is different in actual business settings compared to experimental conditions.