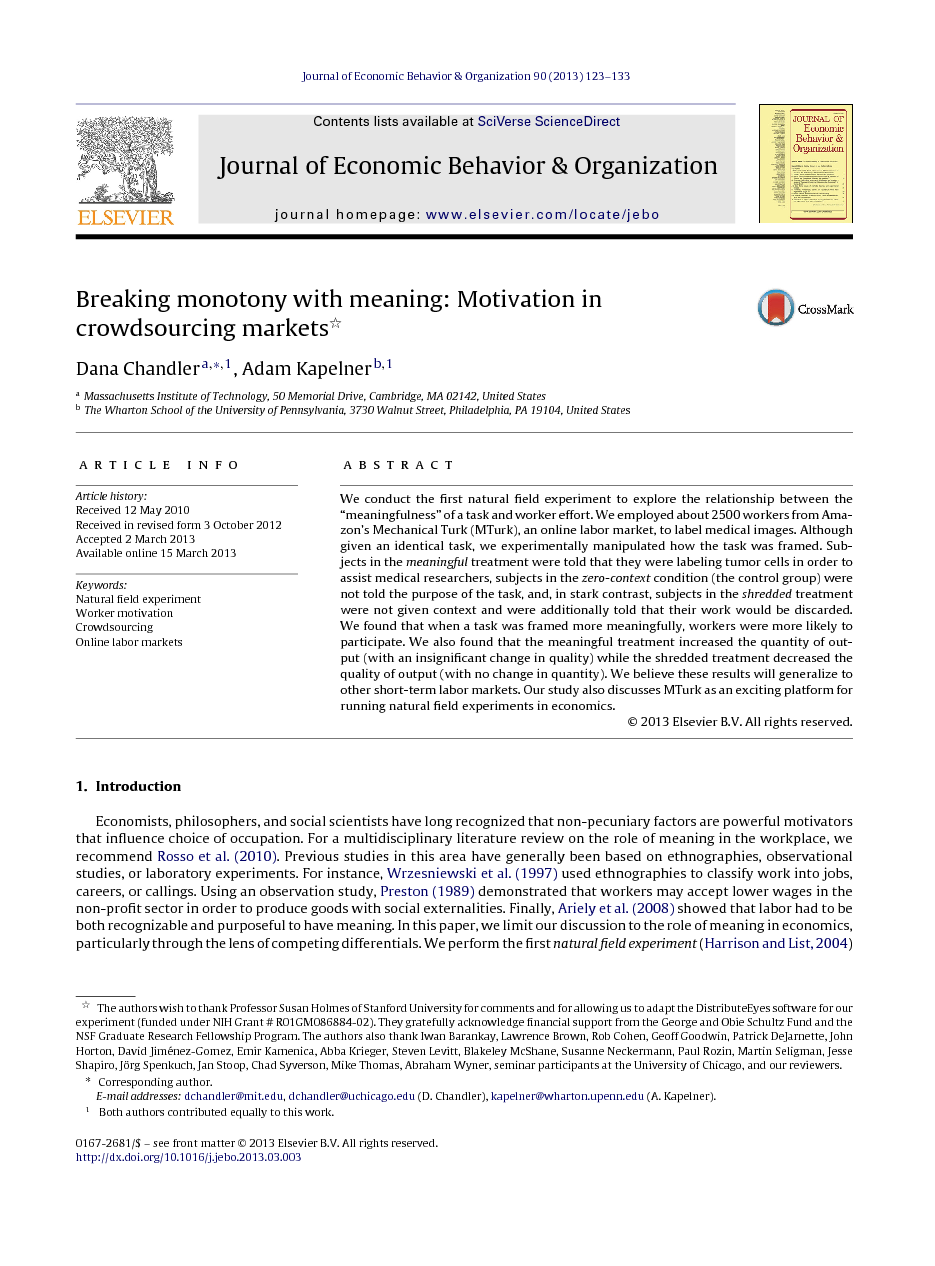 We conduct the first natural field experiment to explore the relationship between the “meaningfulness” of a task and worker effort. We employed about 2500 workers from Amazon's Mechanical Turk (MTurk), an online labor market, to label medical images. Although given an identical task, we experimentally manipulated how the task was framed. Subjects in the meaningful treatment were told that they were labeling tumor cells in order to assist medical researchers, subjects in the zero-context condition (the control group) were not told the purpose of the task, and, in stark contrast, subjects in the shredded treatment were not given context and were additionally told that their work would be discarded. We found that when a task was framed more meaningfully, workers were more likely to participate. We also found that the meaningful treatment increased the quantity of output (with an insignificant change in quality) while the shredded treatment decreased the quality of output (with no change in quantity). We believe these results will generalize to other short-term labor markets. Our study also discusses MTurk as an exciting platform for running natural field experiments in economics.

Our experiment is the first that uses a natural field experiment in a real labor market to examine how a task's meaningfulness influences labor supply. Overall, we found that the greater the amount of meaning, the more likely a subject is to participate, the more output they produce, the higher quality output they produce, and the less compensation they require for their time. We also observe an interesting effect: high meaning increases quantity of output (with an insignificant increase in quality) and low meaning decreases quality of output (with no change in quantity). It is possible that the level of perceived meaning affects how workers substitute their efforts between task quantity and task quality. The effect sizes were found to be the same in the US and India. Our finding has important implications for those who employ labor in any short-term capacity besides crowdsourcing, such as temp-work or piecework. As the world begins to outsource more of its work to anonymous pools of labor, it is vital to understand the dynamics of this labor market and the degree to which non-pecuniary incentives matter. This study demonstrates that they do matter, and they matter to a significant degree. This study also serves as an example of what MTurk offers economists: an excellent platform for high internal validity natural field experiments while evading the external validity problems that may occur in laboratory environments.