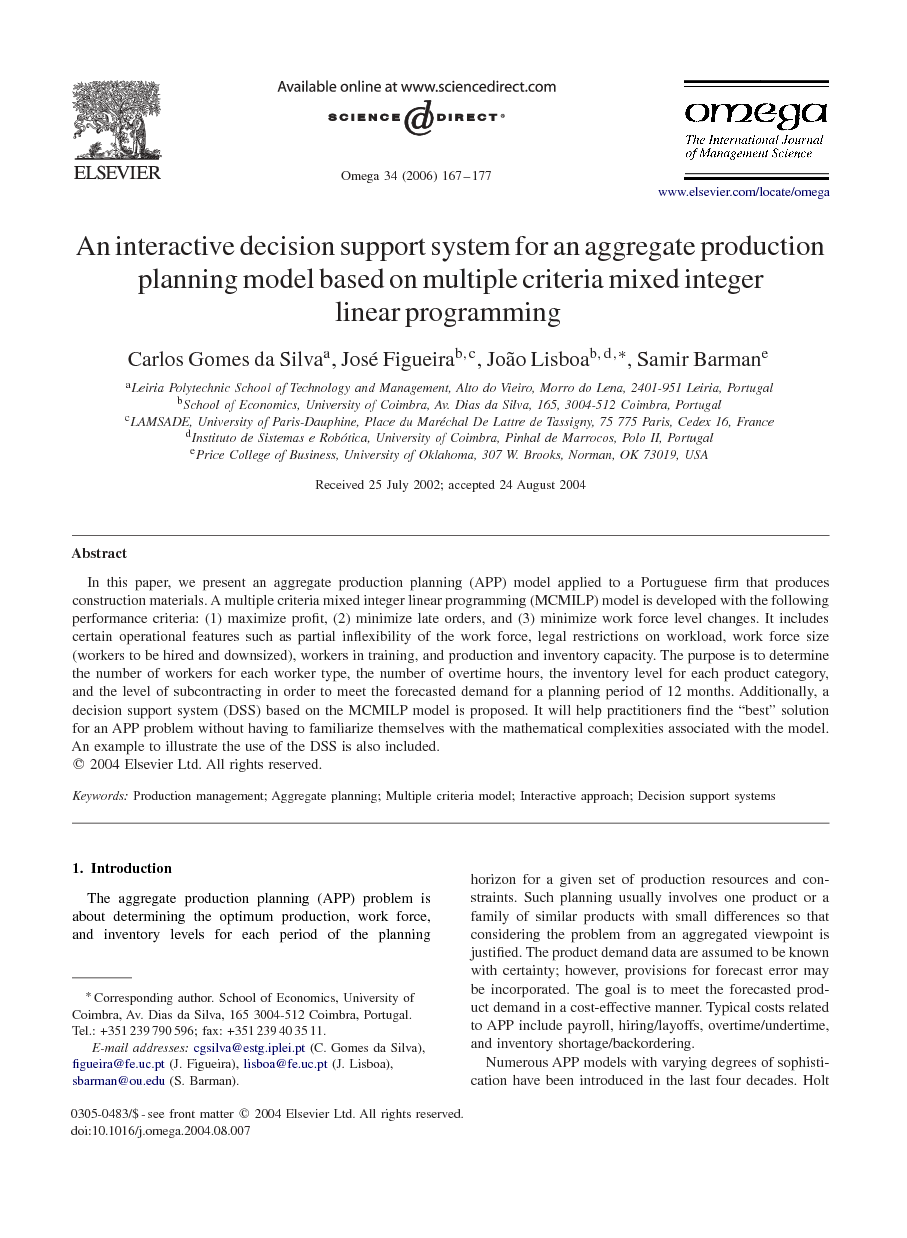 In this paper, we present an aggregate production planning (APP) model applied to a Portuguese firm that produces construction materials. A multiple criteria mixed integer linear programming (MCMILP) model is developed with the following performance criteria: (1) maximize profit, (2) minimize late orders, and (3) minimize work force level changes. It includes certain operational features such as partial inflexibility of the work force, legal restrictions on workload, work force size (workers to be hired and downsized), workers in training, and production and inventory capacity. The purpose is to determine the number of workers for each worker type, the number of overtime hours, the inventory level for each product category, and the level of subcontracting in order to meet the forecasted demand for a planning period of 12 months. Additionally, a decision support system (DSS) based on the MCMILP model is proposed. It will help practitioners find the “best” solution for an APP problem without having to familiarize themselves with the mathematical complexities associated with the model. An example to illustrate the use of the DSS is also included.

The aggregate production planning (APP) problem is about determining the optimum production, work force, and inventory levels for each period of the planning horizon for a given set of production resources and constraints. Such planning usually involves one product or a family of similar products with small differences so that considering the problem from an aggregated viewpoint is justified. The product demand data are assumed to be known with certainty; however, provisions for forecast error may be incorporated. The goal is to meet the forecasted product demand in a cost-effective manner. Typical costs related to APP include payroll, hiring/layoffs, overtime/undertime, and inventory shortage/backordering. Numerous APP models with varying degrees of sophistication have been introduced in the last four decades. Holt et al. [23] developed one of the first APP models, commonly known as the LDR model. It was applied to a paint factory to generate a production plan using quadratic approximations to the actual operational costs of the firm. Silva et al. [2] extended the LDR model to develop a decision rule that considers a constant level of employment during the entire planning period. Hanssman and Hess [3] developed a model based on the linear programming approach using a linear cost structure of the decision variables. Haehling [4] extended the Hanssman and Hess [3] model for multiproduct, multistage production systems in which optimal disaggregation decisions can be made under capacity constraints. In addition, Bowman [5] introduced an APP model based on the linear programming technique using the transportation algorithm. Goodman [6] developed a goal programming (GP) model, which approximates the original nonlinear cost terms of the LDR model by linear terms and solves it using a variant of the simplex method. Rakes et al. [7] presented a chance-constrained GP approach; a special case of stochastic programming to production scheduling that incorporates probabilistic product demand. A similar approach that uses a tabu search method has been proposed elsewhere [8]. Bowman [24] introduced the management coefficient model that generates a firm's aggregate production decisions by capturing and replicating its historical decisions with a multiple regression model. Vergin [9] developed a search-based simulation model and applied it to the paint factory problem [1]. Taubert [10] proposed the search decision rule (SDR) in order to generate an acceptable but not optimal solution to APP problems. Jones [11] formulated the parametric production planning (PPP) model with an objective function that describes the cost structure of a firm. In addition, Mellichamp and Love [12] proposed the production switching heuristics (PSH) model that is easy to implement and consistent with actual management practices. Ashayeri and Selen [13] applied an APP model to make strategic planning decisions for the pharmaceutical industry in The Netherlands. There exist a few studies that integrate the interactive aspects of different functional areas of a company. Damon and Schram [14] analyzed the interrelationship between short-run production rates and the roles of functional areas such as finance and marketing using an integrated model. Pega et al. [15] developed an integrated approach to address the aggregate planning problem and applied it to a firm, which yielded significant savings in the operational costs of the firm. In addition, excellent surveys of APP models can be found in Nam and Logendran [16], and Pan and Kleiner [17]. The approach presented in this study has to do with multiple criteria mathematical programming, which so far appears to have received less than sufficient research attention. Masud and Hwang [18] presented a multiple criteria linear programming model with four objectives, subject to a set of constraints. Another approach using a fuzzy linear programming was proposed by Wang and Fang [19]. Furthermore, a literature review indicates that the prior approaches on multiple criteria mathematical modeling have one limitation in that they cannot generate a solution that optimizes all the important criteria simultaneously [20] and [21]. Generally, a gap exists between the theoretical contributions by researchers and the expectations of managers responsible for implementing aggregate production plans. The purpose of our research is to bridge this gap by introducing a multiple criteria mixed integer linear programming (MCMILP) model that is a realistic, practical alternative to more sophisticated, complex APP models. The practicability of the proposed model is demonstrated through its application in solving an APP problem of a Portuguese firm that produces construction materials. Furthermore, we developed a computerized decision support system (DSS) to aid managers for “solving” similar APP problems without having to familiarize themselves with the theoretical complexities of the model. The DSS, based on the learning-search-oriented concept, systematically searches for the best solution, if one exists. The operational features of the system are designed to generate, evaluate, and compare different solutions through a series of interactive steps [22]. The major advantage of the DSS is that it does not require the decision maker (DM) to comprehend the complexities of the multiple criteria algorithm to solve the problem. Rather, the DSS guides the DM “to solve” the problem in a way that requires the least amount of cognitive effort from the user. The paper is organized as follows. Section 2 presents a description of the proposed MCMILP model. The main features of the interactive DSS are explained in Section 3. Section 4 includes an illustrative example of the DSS and discusses the results. Managerial implications of the research are provided in Section 5. Finally, conclusions and future research directions are presented in Section 6.

This paper presents a multiple criteria mixed integer linear programming model to solve aggregate production planning problems. The model has been developed to optimize three performance criteria for a set of workforce, production, and inventory-related constraints. The performance criteria include: profit, late orders, and the changes in the workforce level. In order to enhance its application in practice, a decision support system based on the model has also been included. We illustrated the use of the decision support system by applying the model to solve an actual aggregate planning problem faced by a Portuguese firm that produces construction products. Over the past few decades, researchers have proposed many aggregate planning models with different levels of sophistication. However, many of these models have experienced limited industrial applications because of their methodological complexities, inflexible assumptions, and impracticable solutions. The research is an attempt to bridge this gap between the theory and practice of aggregate planning models. We believe that the DSS presented in this study will greatly enhance the application of the MCMILP model in practice, making it a better practical alternative to more sophisticated and complex aggregate planning models. Future research might consider the development of an interactive DSS that will help managers cope with uncertain environments in the contexts of uncertainty and/or inaccuracy of forecast data. Another worthwhile avenue for extending this research would be finding ways to incorporate new constraints and objective functions in the model in flexible and efficient manners. Including modules to the current DSS that will allow the user to analyze the sensitivity of different operational and cost parameters is another possible logical extension to this research.