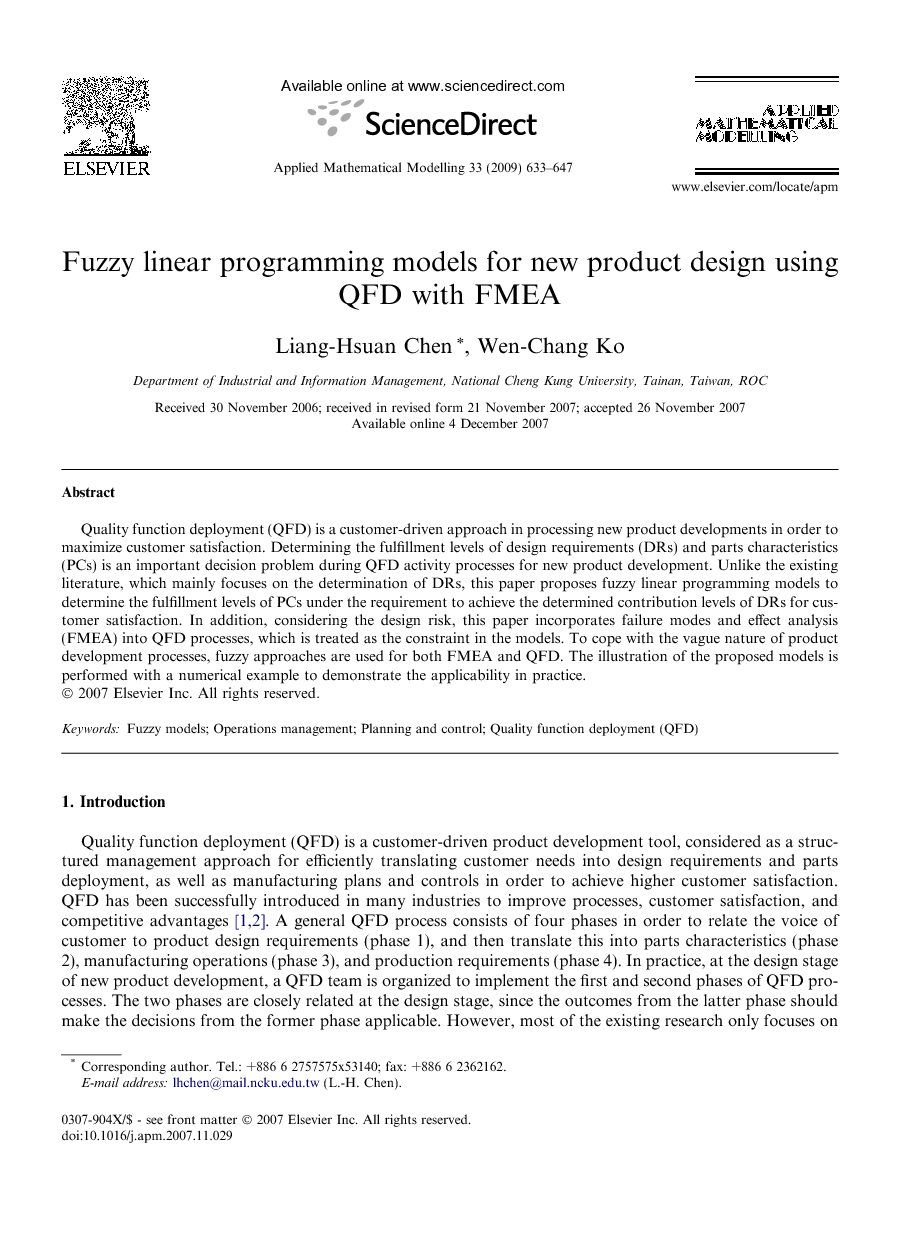 Quality function deployment (QFD) is a customer-driven approach in processing new product developments in order to maximize customer satisfaction. Determining the fulfillment levels of design requirements (DRs) and parts characteristics (PCs) is an important decision problem during QFD activity processes for new product development. Unlike the existing literature, which mainly focuses on the determination of DRs, this paper proposes fuzzy linear programming models to determine the fulfillment levels of PCs under the requirement to achieve the determined contribution levels of DRs for customer satisfaction. In addition, considering the design risk, this paper incorporates failure modes and effect analysis (FMEA) into QFD processes, which is treated as the constraint in the models. To cope with the vague nature of product development processes, fuzzy approaches are used for both FMEA and QFD. The illustration of the proposed models is performed with a numerical example to demonstrate the applicability in practice.

Quality function deployment (QFD) is a customer-driven product development tool, considered as a structured management approach for efficiently translating customer needs into design requirements and parts deployment, as well as manufacturing plans and controls in order to achieve higher customer satisfaction. QFD has been successfully introduced in many industries to improve processes, customer satisfaction, and competitive advantages [1] and [2]. A general QFD process consists of four phases in order to relate the voice of customer to product design requirements (phase 1), and then translate this into parts characteristics (phase 2), manufacturing operations (phase 3), and production requirements (phase 4). In practice, at the design stage of new product development, a QFD team is organized to implement the first and second phases of QFD processes. The two phases are closely related at the design stage, since the outcomes from the latter phase should make the decisions from the former phase applicable. However, most of the existing research only focuses on the first phase of QFD in order to maximize customer satisfaction. Thus, the study that considers the two phases in QFD becomes necessary. For the development at the first phase, the relation matrices between customer requirements (CRs) and design requirements (DRs) and among the DRs are constructed, and the relationships are usually evaluated subjectively by ambiguous or vague judgments, due to the lack of information about the influence of engineering responses on CRs [3] and [4]. However, those relationships are often treated as crisp variables or linguistic scales [1] and [2]. For example, the relation strength by which a DR affects a CR is expressed by a scale system, i.e., 1–3–9, or 1–5–9, indicating linguistic expressions such as “weak”, “moderate”, and “strong”, respectively. In order to make the improvements, fuzzy approaches are adopted by several researchers to address diversified and imprecise problems between CRs and DRs and among the DRs [5], [6], [7], [8], [9] and [10]. However, these existing studies still suffer some drawbacks in approaches, as mentioned by Chen and Weng [3] and [4] in their fuzzy mathematical programming model for QFD. Furthermore, in order to decrease the risk of new product design, the risk analysis of DRs is necessary during the design level of new product development, and the outcomes are applied to phase 2 as the constraints in determining the achievement levels of parts characteristics (PCs). In this respect, failure mode and effect analysis (FMEA) is a systematic technique for identifying, prioritizing and acting on potential failure modes before the failures occur, so this study also adopts FMEA for the risk analysis in the early stages of new product development. Stamatis [11] described the methods of FMEA and its applications. Ginn et al. [12] proposed a methodology for investigating the interaction between QFD and FMEA by cross-functional and multi-disciplined teamwork. Tan [13] developed a customer-focused methodology for the built-in reliability to maximize customers’ satisfaction based on the constrained resources by combining the FMEA and QFD. However, their studies are only limited to descriptive analyses for obtaining the quality and resource benefits. The methods to carry out the aggregation of QFD and FMEA are not mentioned, and the uncertainty at the product design stage is not considered, either. In this study, we extend Chen and Weng’s fuzzy model [4] by introducing FMEA into the existing fuzzy QFD approach and linking phase 1 to phase 2 of QFD in determining the achievement levels of DRs and part characteristics (PCs) to maximize the customers’ satisfaction. In the following two sections, the approaches of fuzzy QFD and FMEA are introduced. In Section 4, a fuzzy linear programming model is developed to determine the achievement degrees of PCs, constrained by the need of DRs in phase 1 and the risk ratings of PCs according to the design of FMEA on DRs. A semiconductor packing example is presented to demonstrate our approach in Section 5. Finally, the concluding remarks are provided.

Determining the fulfillment levels of DRs and PCs is an important task in the first two phases of the QFD processes, when QFD is applied to the new product design and development. However, most related studies only focus on the priority or achievement levels of DRs in phase 1. Unlike the existing research works, both phases 1 and 2 are considered in this paper. Based on the previous mathematical programming model for phase 1 under the fuzzy environment, this paper considers the close link between the two phases to build up a fuzzy linear programming model for phase 2 in determining the fulfillment levels of PCs. For reducing the design risk, risk analysis of DRs, namely a fuzzy FMEA, is taken into account in the phase 2 model. In addition, the satisfaction of the jth DR determined in phase 2 is greater than or equal to the contribution of the jth DR in phase 1 in order to realize customer satisfaction. The proposed model is illustrated with a numerical example to demonstrate the applicability in practice. The resulting ranges of satisfaction degree of phases 1 and 2 as well as the possible ranges of fulfillment levels of DRs and PCs can provide the QFD team with useful information for new product design and development.