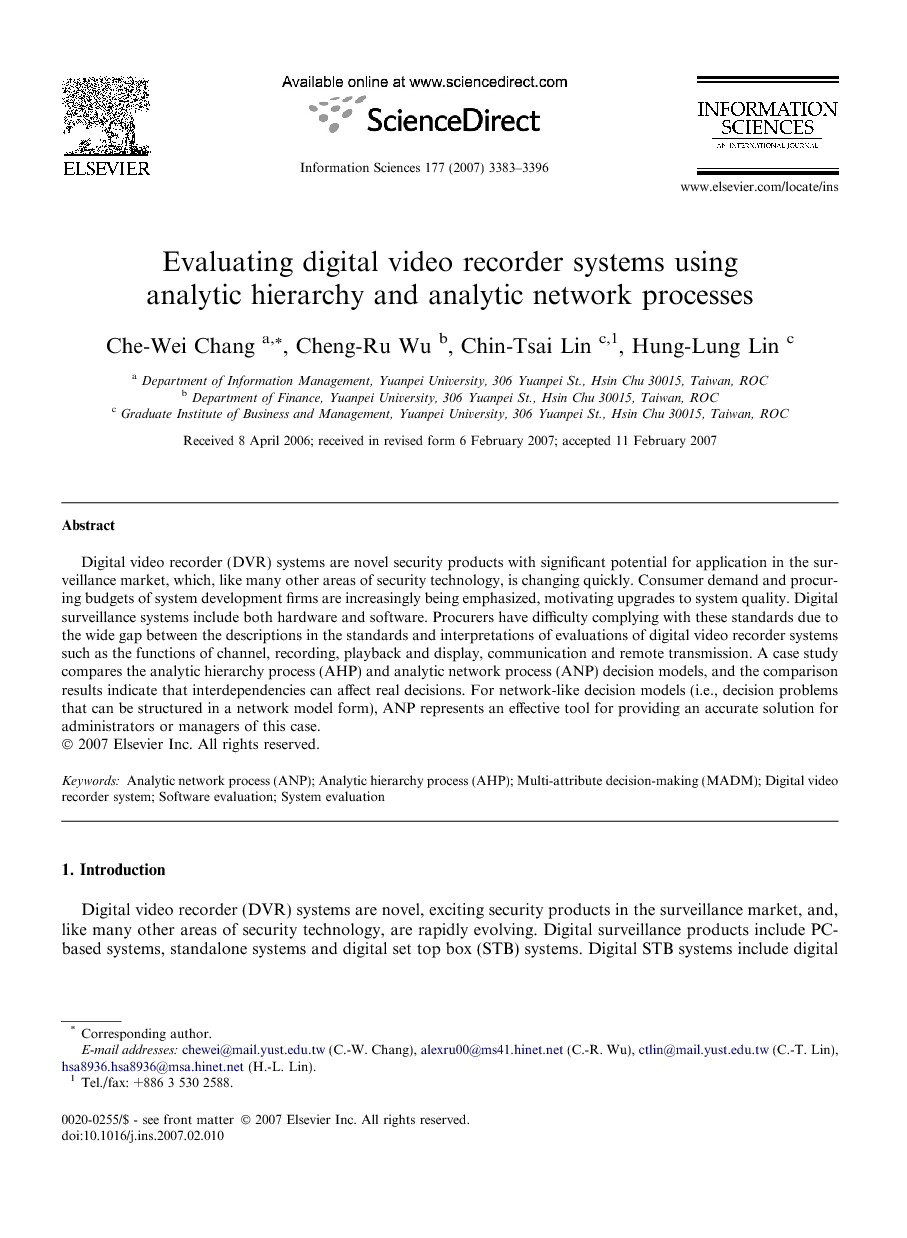 Digital video recorder (DVR) systems are novel security products with significant potential for application in the surveillance market, which, like many other areas of security technology, is changing quickly. Consumer demand and procuring budgets of system development firms are increasingly being emphasized, motivating upgrades to system quality. Digital surveillance systems include both hardware and software. Procurers have difficulty complying with these standards due to the wide gap between the descriptions in the standards and interpretations of evaluations of digital video recorder systems such as the functions of channel, recording, playback and display, communication and remote transmission. A case study compares the analytic hierarchy process (AHP) and analytic network process (ANP) decision models, and the comparison results indicate that interdependencies can affect real decisions. For network-like decision models (i.e., decision problems that can be structured in a network model form), ANP represents an effective tool for providing an accurate solution for administrators or managers of this case.

Digital video recorder (DVR) systems are novel, exciting security products in the surveillance market, and, like many other areas of security technology, are rapidly evolving. Digital surveillance products include PC-based systems, standalone systems and digital set top box (STB) systems. Digital STB systems include digital cable STB, digital satellite STB and digital TV [5]. Digital surveillance technology is growing in complexity, complicating efforts to ensure the system stability and quality of individual product types. Consumer demand and procuring budgets of system development firms are receiving increasing attention, motivating improvements in system quality. Digital surveillance systems include hardware and software. Procurers cannot easily comply with these standards, due to the existence of a large gap between the descriptions given in the standards and interpretations of evaluations of digital video recorder systems such as functions of channel, recording, playback and display, communication and remote transmission. The government of Hsinchu City, located in northern Taiwan, is interested in improving monitoring of public spaces. Hence, the Hsinchu City Government is applying DVR systems in place of their traditional surveillance camera systems. The DVR system circumvents restrictions of traditional surveillance camera systems, which include: (a) lapses in recording due to operator neglect or machine error; (b) difficulty in locating a desired time sequence following completion of a recording; (c) poor video quality, and (d) difficulty in maintaining and preserving tapes due to a lack storage space and natural degradation of film quality. According to government procurement regulations, regional governments need to select at least five evaluators and review more than three firms before selecting the best DVR system. This study considers four candidate DVR systems that are common in the surveillance market, manufactured by Firms A, B, C and D, respectively. However, selecting a DVR system is a multi-attribute decision-making (MADM) problem. MADM is a methodology that helps decision-makers make preference decisions selection regarding a finite set of available alternatives courses of action characterized by multiple, potentially conflicting attributes [30] and [19]. MADM provides a formal framework for modeling multi-attribute decision problems, particularly problems demanding a systematic analysis, including analysis of the decision complexity, regularity, significant consequences, and the need for accountability [3]. Among those well-known methods, MADM has only recently been adopted to evaluate DVR systems. MADM applies a set of attributes to solve a decision problem. Existing evaluation problems or studies have applied AHP and ANP to set up a hierarchical or network skeleton, within which multi-attribute decision problems can be structured (e.g. [2], [4], [6], [7], [8], [9], [10], [11], [12], [13], [14], [15], [21], [22], [27], [28] and [29]). The applicability of the proposed model is demonstrated in a case study. The propose model as well as the basic concepts of AHP and ANP. The results of the system stability test indicate the advantages of the ANP decision model in determining the value of ANP. However, this case study compares the AHP and ANP decision models, and the results indicate that interdependencies can affect real decisions. Significantly, the proposed method can assist purchasers or users in assessing the DVR systems, making it easily applicable for academic and commercial applications.

This study proposes a multi-attribute evaluation model and algorithm capable of effectively evaluating DVR systems from the perspective of users or purchasers, thus enabling administrators or decision-makers to identify optimum DVR systems. Significantly, this study provides procurement personnel with an easily applied and objective method of assessing the appropriateness of DVR systems. The surveillance market includes many DVR systems, each with unique functions, thus easily causing confusion when evaluating them. This study proposes a method for identifying the best DVR from among those offered by four firms, by considering multiple assessment characteristics, improving upon the popular MADM approach to alternative prioritization. To determine the value of ANP, the results of the normalized relative weights of the DVR systems obtained from ANP and AHP are compared. The systems of all four firms were stable for four weeks in the test (see Table 9). Test results clearly indicate that Firm A’s product is more stable than that of Firm B. Table 10 presents the local relative weights of the four DVR systems based on the results of ANP, as well as the local relative weights determined from AHP. However, System A should be the optimum system, since it is more stable than Firm B in terms of mean CPU efficiency, greatest efficiency, mean MEM loading, top loading and frequency of system crashes. If the decision model does not specify the interdependent relationships (i.e., only AHP model), Firm B should offer the best system since it has the largest relative weight (Firm B = 0.322, from AHP in Table 9). Obviously, this comparative analysis in systems stable test negatively affects the result of AHP model, since the ANP decision model considers the interdependencies among selection criteria that exert additional effect on the model. AHP suffers from the limitation of only being applicable to straightforward hierarchical structures, while ANP has powerful capacity to solve current construction management issues that involve more complex decision problems. However, this does not mean that the results determined from AHP would necessarily differ from those determined from ANP. Whether the results differ depends on the subjective and/or objective ratings assigned to the judgment matrices. However, in cases involving interdependent influences, ANP is a viable method for selecting among various alternatives. This study applies ANP to evaluate the DVR systems, and yields an improvement upon the popular MADM approach to alternative prioritization. This example indicates that interdependencies can affect real decisions. For network-like decision models (i.e., decision problems that can be structured in the form of a network model), ANP is an effective tool providing an accurate solution for administrators or managers.The concept of ANP has evolved to handle interdependent relationships in a multi-attribute decision model. Although AHP has previously been applied in governmental procurement, this study is probably the first that attempts to apply ANP in governmental procurement. This study has demonstrated an example to illustrate the steps of ANP in governmental procurement. It applies both AHP and ANP to evaluate the performance of different DVR systems in governmental procurement. Although the results of AHP and ANP do not indicate significant disparity, they do find some differences in ranking and the final priority weights of the alternatives. ANP, which considers the interrelationship among criteria, should be adopted if possible. The results of systems stable testing provide guidance for multi-criteria environment in accepting ranks when its criteria consider interrelationship. This study has found that ANP is a promising methodology for evaluating appropriate DVR systems candidate. ANP is successfully applied to the case described here. Although ANP improves upon the popular MADM approach to alternative prioritization for this case, it cannot adequately resolve the inherent uncertainty and imprecision associated with the mapping of decision-maker perceptions of exact numbers. Uncertainty judgment is represented in the traditional formulation of ANP. Uncertainty is a province of probability theory and an attribute of information. A fundamental principle of the generalized theory of uncertainty is that information, regardless of its form, can be represented in the form of a generalized constraint [31]. This study proposes further combining the ANP and uncertainty regarding probability theory to resolve other problems.