عنوان انگلیسی
In the Fall of 2002, the ANP had shown a better way to deal with Iraq
دانلود فوری مقاله + سفارش ترجمه 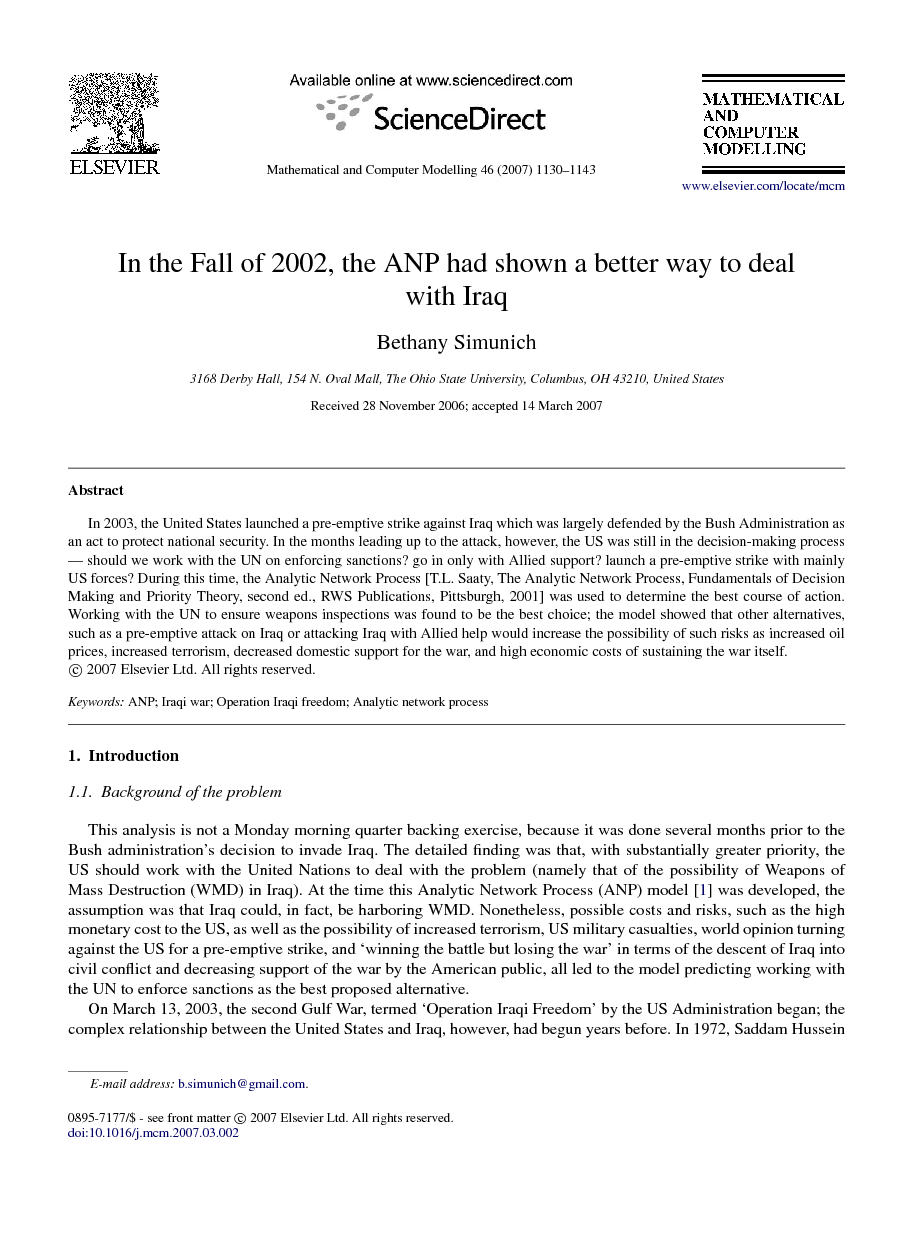 In 2003, the United States launched a pre-emptive strike against Iraq which was largely defended by the Bush Administration as an act to protect national security. In the months leading up to the attack, however, the US was still in the decision-making process — should we work with the UN on enforcing sanctions? go in only with Allied support? launch a pre-emptive strike with mainly US forces? During this time, the Analytic Network Process [T.L. Saaty, The Analytic Network Process, Fundamentals of Decision Making and Priority Theory, second ed., RWS Publications, Pittsburgh, 2001] was used to determine the best course of action. Working with the UN to ensure weapons inspections was found to be the best choice; the model showed that other alternatives, such as a pre-emptive attack on Iraq or attacking Iraq with Allied help would increase the possibility of such risks as increased oil prices, increased terrorism, decreased domestic support for the war, and high economic costs of sustaining the war itself.

1.1. Background of the problem This analysis is not a Monday morning quarter backing exercise, because it was done several months prior to the Bush administration’s decision to invade Iraq. The detailed finding was that, with substantially greater priority, the US should work with the United Nations to deal with the problem (namely that of the possibility of Weapons of Mass Destruction (WMD) in Iraq). At the time this Analytic Network Process (ANP) model [1] was developed, the assumption was that Iraq could, in fact, be harboring WMD. Nonetheless, possible costs and risks, such as the high monetary cost to the US, as well as the possibility of increased terrorism, US military casualties, world opinion turning against the US for a pre-emptive strike, and ‘winning the battle but losing the war’ in terms of the descent of Iraq into civil conflict and decreasing support of the war by the American public, all led to the model predicting working with the UN to enforce sanctions as the best proposed alternative. On March 13, 2003, the second Gulf War, termed ‘Operation Iraqi Freedom’ by the US Administration began; the complex relationship between the United States and Iraq, however, had begun years before. In 1972, Saddam Hussein forcibly rose to power in Iraq; 16 years later, Hussein took the opportunity afforded by a cease-fire in the Iran–Iraq war to rebuild his military, aided by funds and technology from Western Europe and the United States. In January 1991, a US–led international coalition began using both air and ground force against Iraqi forces after a UN demand to withdraw from Kuwait was ignored. In April 1991, a cease-fire was agreed to and UN sanctions were imposed; the sanctions were to remain in place until certain conditions, including Iraq ending its WMD program, were met. In 1995, the UN began the “oil-for-food” program when fears arose that the sanctions were reducing Iraqi civilian quality of life to a point where access to food and medicine were compromised. Under the program, Iraq was permitted to buy food and medicine using proceeds from oil exports, even though the exporting of oil was banned under the embargo. In November 1998, UN weapons inspectors were withdrawn after it was claimed that Hussein made it impossible for them to verify whether Iraq had chemical, biological or nuclear weapons, as prohibited by the 1991 agreement. The following month, “Operation Desert Fox”, executed by US and British forces, began four days of airstrikes against Iraqi weaponry targets. September 11, 2001, however, was the catalyst for a resurgence of national and international attention on Iraq. The following day, President George W. Bush made a speech to the UN General Assembly stating that Hussein was violating commitments made at the conclusion of the first Gulf War, including promises to end WMD programs and improve human rights. The following month, the Authorization for Use of Military Force against Iraq Resolution of 2002 was passed in the US Congress. In November, the passing of UN Security Council Resolution 1441 demanded that Iraq comply with its disarmament obligations as well as previous resolutions on human rights, terrorism and prisoners of war. Although Iraq agreed to the resolution and UNMOVIC began inspections that same month, the veracity of Iraq’s cooperation was disputed. In February 2003, US Secretary of State Colin Powell spoke to the UN Security Council regarding the threat that Hussein’s regime posed; the Bush Administration also claimed, at this time, that Iraq had ties to al Qaeda and other terrorist organizations and was still developing WMD. The following month, a US-led coalition invaded Iraq. Having completed this analysis before the US made the decision to launch a pre-emptive attack on Iraq, it is interesting to look back at the results in light of events that have transpired since that time. WMDs were never found, and domestic support for the war has diminished as our war debt increases and Iraq itself spirals into what some claim is a civil war. What follows is the decision-making model, understanding of the issue, analysis and recommendations as they emerged from the study in the fall of 2002.