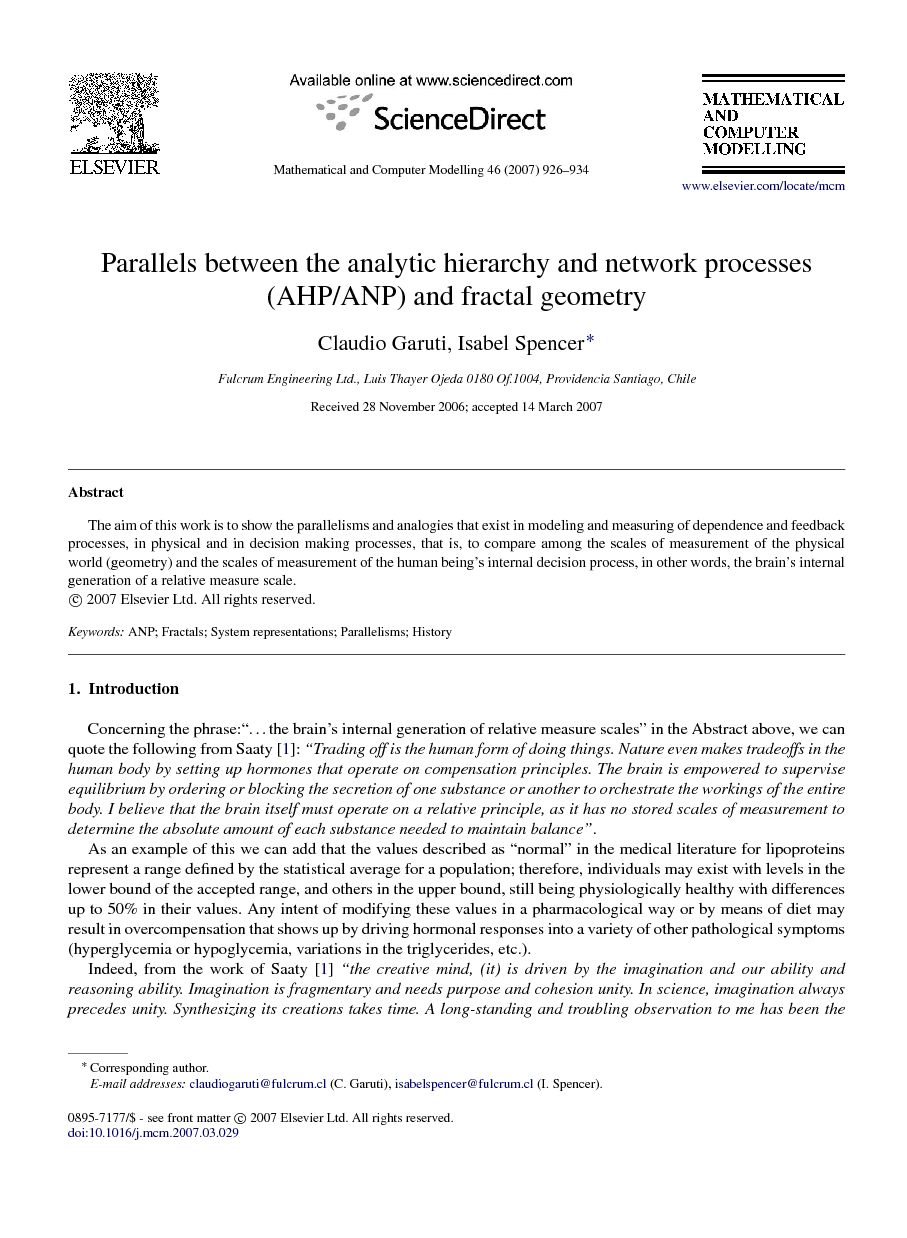 The aim of this work is to show the parallelisms and analogies that exist in modeling and measuring of dependence and feedback processes, in physical and in decision making processes, that is, to compare among the scales of measurement of the physical world (geometry) and the scales of measurement of the human being’s internal decision process, in other words, the brain’s internal generation of a relative measure scale.

Concerning the phrase:“…the brain’s internal generation of relative measure scales” in the Abstract above, we can quote the following from Saaty [1]: “Trading off is the human form of doing things. Nature even makes tradeoffs in the human body by setting up hormones that operate on compensation principles. The brain is empowered to supervise equilibrium by ordering or blocking the secretion of one substance or another to orchestrate the workings of the entire body. I believe that the brain itself must operate on a relative principle, as it has no stored scales of measurement to determine the absolute amount of each substance needed to maintain balance”. As an example of this we can add that the values described as “normal” in the medical literature for lipoproteins represent a range defined by the statistical average for a population; therefore, individuals may exist with levels in the lower bound of the accepted range, and others in the upper bound, still being physiologically healthy with differences up to 50% in their values. Any intent of modifying these values in a pharmacological way or by means of diet may result in overcompensation that shows up by driving hormonal responses into a variety of other pathological symptoms (hyperglycemia or hypoglycemia, variations in the triglycerides, etc.). Indeed, from the work of Saaty [1]“the creative mind, (it) is driven by the imagination and our ability and reasoning ability. Imagination is fragmentary and needs purpose and cohesion unity. In science, imagination always precedes unity. Synthesizing its creations takes time. A long-standing and troubling observation to me has been the fragmentary and evanescent nature of our knowledge. This is due both to the diversity of our experience and to an absence of goal-oriented thought structures–hierarchies–needed to link knowledge from one set of goals to a higher set and ultimately for our survival.”. As an intermediate objective of this work, we examine the basic concepts of measurement interpretation and quantification, and their development in history (Euclidean, Cartesian and fractal geometry) [4]. Metric concepts and their interpretation in the physical world (for example, the concept of distance), and in the decision-making world, are examined and we point out the analogies between metric axioms and the Analytic Hierarchy Process (AHP) axioms. This work also considers some of the mathematical parallelisms that exist in the representation of reality by both systems (ANP & fractal geometry) and in the modeling processes used in both systems such as: limits, convergence, stability, attractors, and still others like errors, randomness, consistencies and their physical interpretations, all of which are shown in a graphical way with simple explanations and interpretations.

It is interesting to examine in detail the parallels and the positive and negative consequences of these prediction models. As an illustrative example, a chart of equivalences is shown in Table 1.This chart of equivalences refers to computations when using either a fractal model or an AHP/ANP model and the consequences. For instance, in the ANP the comparisons of all the related variables are required to determine their final behavior under dependence. In the same way, in the fractal world jumps cannot be made — state 3 cannot be drawn without passing through the previous states 1 and 2. As a consequence of the above, as more data than the user might expect have to be entered (required by both systems), more results (correlations) appear than those originally sought. Even if some of these lateral results do not have a simple interpretation, they might reveal interesting aspects that provide a deeper understanding of the phenomena that have been modeled. In the ANP steady solution vectors arise (eigenvectors), and in the case of fractals steady points of attraction arise (attractors). But in both systems, in the steady state dipolar points may arise, i.e., more than one solution (eigenvector or attractor) may appear, and the solution may oscillate between these two or more points (scenarios). As a last comment, regarding the behavior of these interdependent and chaotic systems, we can say that both systems are ways of building or constructing measures (where they do not exist or at least their existence is not obvious), to better represent/mimic the world. Fractals do it in the physical world and ANP in the decision world. The results are highly dependent on the initial conditions and on the degree of feedback in the system. Despite the fact that this conclusion seems to be “obvious”, it is a very important one, since the results are so strongly driven by the initial conditions and degree of feedback in the system in both cases. Finally, there are global parallels as the methods for constructing physical measurements (geometry) and decision measurements have evolved over time as shown in Fig. 6.As we travel from an ideal vision of the world towards a more realistic one, the system complexity grows in an overwhelming way, requiring more and more complete and complex models in order to represent it appropriately. The cost of this effort, however, is compensated for by our need for and capacity to build consensus and make better decisions, and by our ability to create better models that better recreate the real world and our increasing capability to predict behaviors in the different branches of human activity and knowledge. We are better equipped now to understand the world and ourselves, first as a system of individual decision makers but, more importantly, we are now collectively better equipped as decision makers too, and this might make a world of difference to us as we evolve as a species.