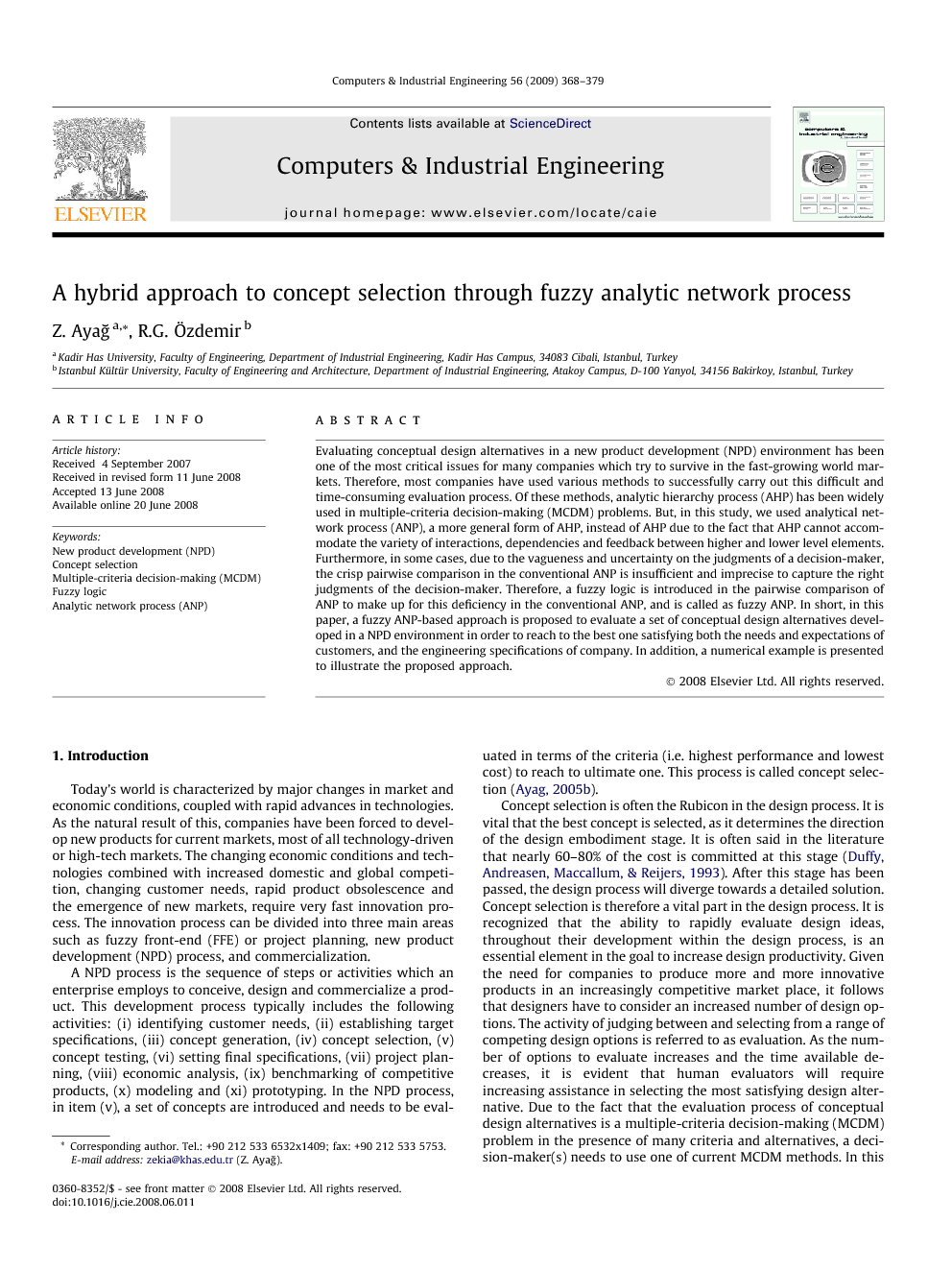 Evaluating conceptual design alternatives in a new product development (NPD) environment has been one of the most critical issues for many companies which try to survive in the fast-growing world markets. Therefore, most companies have used various methods to successfully carry out this difficult and time-consuming evaluation process. Of these methods, analytic hierarchy process (AHP) has been widely used in multiple-criteria decision-making (MCDM) problems. But, in this study, we used analytical network process (ANP), a more general form of AHP, instead of AHP due to the fact that AHP cannot accommodate the variety of interactions, dependencies and feedback between higher and lower level elements. Furthermore, in some cases, due to the vagueness and uncertainty on the judgments of a decision-maker, the crisp pairwise comparison in the conventional ANP is insufficient and imprecise to capture the right judgments of the decision-maker. Therefore, a fuzzy logic is introduced in the pairwise comparison of ANP to make up for this deficiency in the conventional ANP, and is called as fuzzy ANP. In short, in this paper, a fuzzy ANP-based approach is proposed to evaluate a set of conceptual design alternatives developed in a NPD environment in order to reach to the best one satisfying both the needs and expectations of customers, and the engineering specifications of company. In addition, a numerical example is presented to illustrate the proposed approach.

Today’s world is characterized by major changes in market and economic conditions, coupled with rapid advances in technologies. As the natural result of this, companies have been forced to develop new products for current markets, most of all technology-driven or high-tech markets. The changing economic conditions and technologies combined with increased domestic and global competition, changing customer needs, rapid product obsolescence and the emergence of new markets, require very fast innovation process. The innovation process can be divided into three main areas such as fuzzy front-end (FFE) or project planning, new product development (NPD) process, and commercialization. A NPD process is the sequence of steps or activities which an enterprise employs to conceive, design and commercialize a product. This development process typically includes the following activities: (i) identifying customer needs, (ii) establishing target specifications, (iii) concept generation, (iv) concept selection, (v) concept testing, (vi) setting final specifications, (vii) project planning, (viii) economic analysis, (ix) benchmarking of competitive products, (x) modeling and (xi) prototyping. In the NPD process, in item (v), a set of concepts are introduced and needs to be evaluated in terms of the criteria (i.e. highest performance and lowest cost) to reach to ultimate one. This process is called concept selection (Ayag, 2005b). Concept selection is often the Rubicon in the design process. It is vital that the best concept is selected, as it determines the direction of the design embodiment stage. It is often said in the literature that nearly 60–80% of the cost is committed at this stage (Duffy, Andreasen, Maccallum, & Reijers, 1993). After this stage has been passed, the design process will diverge towards a detailed solution. Concept selection is therefore a vital part in the design process. It is recognized that the ability to rapidly evaluate design ideas, throughout their development within the design process, is an essential element in the goal to increase design productivity. Given the need for companies to produce more and more innovative products in an increasingly competitive market place, it follows that designers have to consider an increased number of design options. The activity of judging between and selecting from a range of competing design options is referred to as evaluation. As the number of options to evaluate increases and the time available decreases, it is evident that human evaluators will require increasing assistance in selecting the most satisfying design alternative. Due to the fact that the evaluation process of conceptual design alternatives is a multiple-criteria decision-making (MCDM) problem in the presence of many criteria and alternatives, a decision-maker(s) needs to use one of current MCDM methods. In this paper, we utilized analytic network process (ANP) as presented next. As one of the most commonly used techniques for solving MCDM problems, analytic hierarchy process (AHP) was first introduced by Saaty (1981). In the AHP, a hierarchy considers the distribution of a goal amongst the elements being compared, and judges which element has a greater influence on that goal. In reality, a holistic approach like ANP is needed if all attributes and alternatives involved are connected in a network system that accepts various dependencies. Several decision problems cannot be hierarchically structured because they involve the interactions and dependencies in higher or lower level elements. Not only does the importance of the attributes determine the importance of the alternatives as in the AHP, but the importance of alternatives themselves also influences the importance of the attributes. Furthermore, in the conventional ANP method as in the AHP, the pairwise comparisons for each level with respect to the goal of the best alternative selection are conducted using a nine-point scale of Saaty. If this nine-point scale is used to make all pairwise comparions in the ANP, some shortcomings are observed similar to the AHP as follows: (i) it is mainly used in nearly crisp decision applications, (ii) it creates and deals with a very unbalanced scale of judgment, (iii) it does not take into account the uncertainty associated with the mapping of one’s judgment to a number, (iv) its ranking is rather imprecise and (v) the subjective judgment, selection and preference of decision-makers have great influence on its results. Due to the vagueness and uncertainty on judgments of the decision-maker(s), the crisp pairwise comparison in the conventional ANP seems to be insufficient and imprecise to capture the right judgments of decision-maker(s). Therefore, in this study, a fuzzy logic is introduced in the pairwise comparison of ANP to make up for this deficiency in the conventional ANP, called as fuzzy ANP. The objective of this paper is to present a fuzzy ANP-based approach to the concept selection problem using triangular fuzzy numbers in order to reach to the ultimate one satisfying both the expectations of customers, and the engineering specifications of company. Furthermore, a numerical example is presented to illustrate the proposed approach.

The objective of the research was, to use a fuzzy ANP-based approach to evaluate a set of conceptual design alternatives in a NPD environment in order to reach to ultimate conceptual alternative that satisfies the needs and the expectations of both customers and company. The back-end and front-end of product development mainly affects to defining determinants, dimensions and attribute-enablers used in the ANP method. Because the ANP needs well-defined the elements in a decision network, which are obtained from customer expectations, technical specifications and more information created during development project in a NPD environment. As compared to the AHP, the analysis using the ANP is relatively cumbersome, because a great deal of pairwise comparison matrices should be constructed for a typical study. In our study, we built great deal of pairwise matrices. Acquiring the relationships among determinants, dimensions and attribute-enablers required very long and exhaustive effort. On the other hand, advantage of the ANP method is to capture interdependencies across and along the decision hierarchies. It means that the ANP provides more reliable solution than the AHP. The full support of management in the ANP will help to use their long experience and thus eliminate the biases in the weights for conceptual design alternatives. Although the AHP is easier to apply than the ANP, in this study, we selected the ANP, both due to the fact that its holistic view and interdependencies accounted in the ANP, and due to the fact that it generates more reliable solution than the AHP. Making wrong decision in selecting the best concept can put a company into undesired risk in terms of losing market share, cost and time. The ANP approach illustrated in this paper has a few limitations as well. For example, the outcome of the model is dependent on the inputs provided by the decision-maker(s). The possibility of bias of the decision-maker towards any particular alternative cannot be ruled out while applying this model. Inconsistency may also occur in the pairwise comparison of matrices, which may give wrong results. There are a number of opportunities for expanding the research presented herein. Its potential applicability in real-world problems raises practical challenges that include issues such as the problem structuring phase, the uncertainty analysis, and its usefulness in a group decision-making environment, among others. In addition, the number of criteria and their related sub-criteria can affect to the applicability of fuzzy ANP method due to the fact that the decision-maker(s) might have to make great deal of judgments in constructing pair wise matrices. For future work, it would be better to divide each kind of risk into sub-factors in order to capture more reliable comparison judgments of the decision-makers. Furthermore, a knowledge-based (KB) or an expert system (ES) can be integrated to help the decision-maker(s) both make fuzzy pair wise calculations more concisely, and interpret the results in each step of the fuzzy ANP.