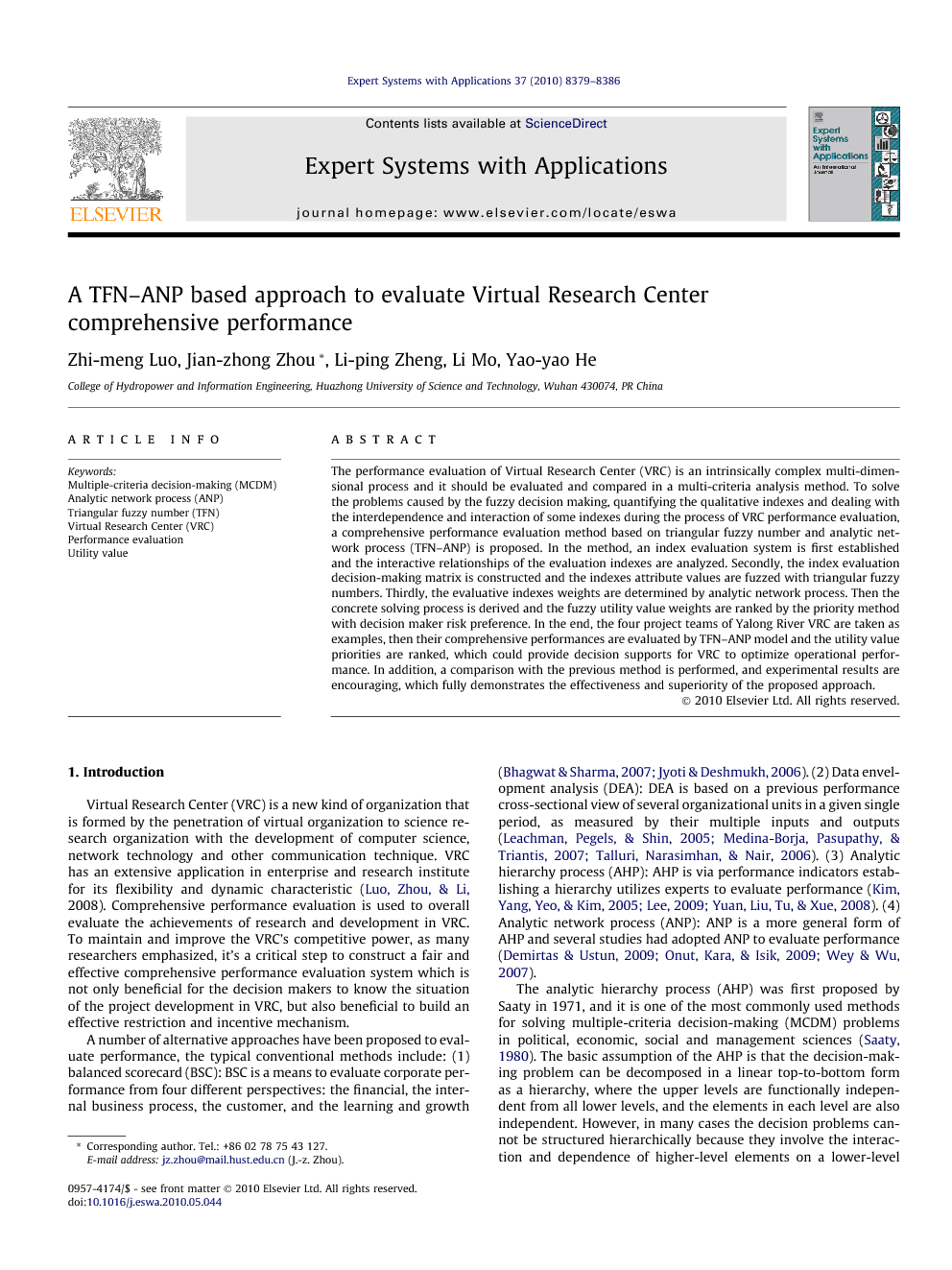 The performance evaluation of Virtual Research Center (VRC) is an intrinsically complex multi-dimensional process and it should be evaluated and compared in a multi-criteria analysis method. To solve the problems caused by the fuzzy decision making, quantifying the qualitative indexes and dealing with the interdependence and interaction of some indexes during the process of VRC performance evaluation, a comprehensive performance evaluation method based on triangular fuzzy number and analytic network process (TFN–ANP) is proposed. In the method, an index evaluation system is first established and the interactive relationships of the evaluation indexes are analyzed. Secondly, the index evaluation decision-making matrix is constructed and the indexes attribute values are fuzzed with triangular fuzzy numbers. Thirdly, the evaluative indexes weights are determined by analytic network process. Then the concrete solving process is derived and the fuzzy utility value weights are ranked by the priority method with decision maker risk preference. In the end, the four project teams of Yalong River VRC are taken as examples, then their comprehensive performances are evaluated by TFN–ANP model and the utility value priorities are ranked, which could provide decision supports for VRC to optimize operational performance. In addition, a comparison with the previous method is performed, and experimental results are encouraging, which fully demonstrates the effectiveness and superiority of the proposed approach.

Virtual Research Center (VRC) is a new kind of organization that is formed by the penetration of virtual organization to science research organization with the development of computer science, network technology and other communication technique. VRC has an extensive application in enterprise and research institute for its flexibility and dynamic characteristic (Luo, Zhou, & Li, 2008). Comprehensive performance evaluation is used to overall evaluate the achievements of research and development in VRC. To maintain and improve the VRC’s competitive power, as many researchers emphasized, it’s a critical step to construct a fair and effective comprehensive performance evaluation system which is not only beneficial for the decision makers to know the situation of the project development in VRC, but also beneficial to build an effective restriction and incentive mechanism. A number of alternative approaches have been proposed to evaluate performance, the typical conventional methods include: (1) balanced scorecard (BSC): BSC is a means to evaluate corporate performance from four different perspectives: the financial, the internal business process, the customer, and the learning and growth (Bhagwat and Sharma, 2007 and Jyoti and Deshmukh, 2006). (2) Data envelopment analysis (DEA): DEA is based on a previous performance cross-sectional view of several organizational units in a given single period, as measured by their multiple inputs and outputs (Leachman et al., 2005, Medina-Borja et al., 2007 and Talluri et al., 2006). (3) Analytic hierarchy process (AHP): AHP is via performance indicators establishing a hierarchy utilizes experts to evaluate performance (Kim et al., 2005, Lee, 2009 and Yuan et al., 2008). (4) Analytic network process (ANP): ANP is a more general form of AHP and several studies had adopted ANP to evaluate performance (Demirtas and Ustun, 2009, Onut et al., 2009 and Wey and Wu, 2007). The analytic hierarchy process (AHP) was first proposed by Saaty in 1971, and it is one of the most commonly used methods for solving multiple-criteria decision-making (MCDM) problems in political, economic, social and management sciences (Saaty, 1980). The basic assumption of the AHP is that the decision-making problem can be decomposed in a linear top-to-bottom form as a hierarchy, where the upper levels are functionally independent from all lower levels, and the elements in each level are also independent. However, in many cases the decision problems cannot be structured hierarchically because they involve the interaction and dependence of higher-level elements on a lower-level element. Among the available multi-attribute decision-making methods only ANP can be used to evaluate performance systematically due to the dependencies and feedbacks caused by the mutual effects of the criteria. It’s a typical multiple-criteria and semi-structured problem to evaluate the VRC performance. On one hand, some indexes of evaluation system are quantified not in exact numbers but in fuzzy numbers. On the other hand, there would be strong dependencies and feedbacks among different indexes. Furthermore, due to incomplete information or knowledge, complexity and uncertainty within the decision environment, it is relatively difficult for the decision maker to make a correct judgment or objective evaluation during the evaluation process. Therefore, this research proposes an approach based on triangular fuzzy number and analytic network process (TFN–ANP) to evaluate VRC performance. Then the Virtual Research Center of Yalong river hydropower development is taken as a case which identifies proposed model capable of choosing an effective monitor to adequately implement a comprehensive performance model in VRC project management practices. The TFN–ANP based decision-making method for constructing an evaluation method can provide decision makers with a valuable reference for evaluating the VRC organizational performance.

Comprehensive performance evaluation of VRC is a complex multi-criteria decision-making problem, and its complexity is further aggravated if the highly important interdependence and feedback among the evaluative criteria are taken into consideration. ANP, providing a systematic approach to set priorities among performance evaluation, can effectively capture the interdependencies and feedback among various criteria. However, ANP handles only crisp comparison ratios. The TFN method is accordingly adopted as a supplement to increase the capability of ANP in tackling uncertain decision-making judgments. Aiming to enhance both efficiency and accuracy, TFN–ANP that combines TFN and ANP can be adopted as an integrated model for VRC’s performance evaluation. The application of the TFN–ANP approach provides the VRC with a more accurate and realistic performance score. After applying the proposed performance evaluation model, a VRC project team can clearly understand its overall performance, detect its weak areas, in which its performance scores are lower than the averages of other teams, and develop necessary programs to close the performance gaps in weak areas. The model provides not only the performance scores, but also weights of the areas of success. Lower weighted areas are considered more important for the VRC and are selected for improvement. Besides, the involvement of fuzzy theory can adequately resolve the inherent uncertainty and imprecision associated with the mapping of a decision maker’s perception to exact numbers.