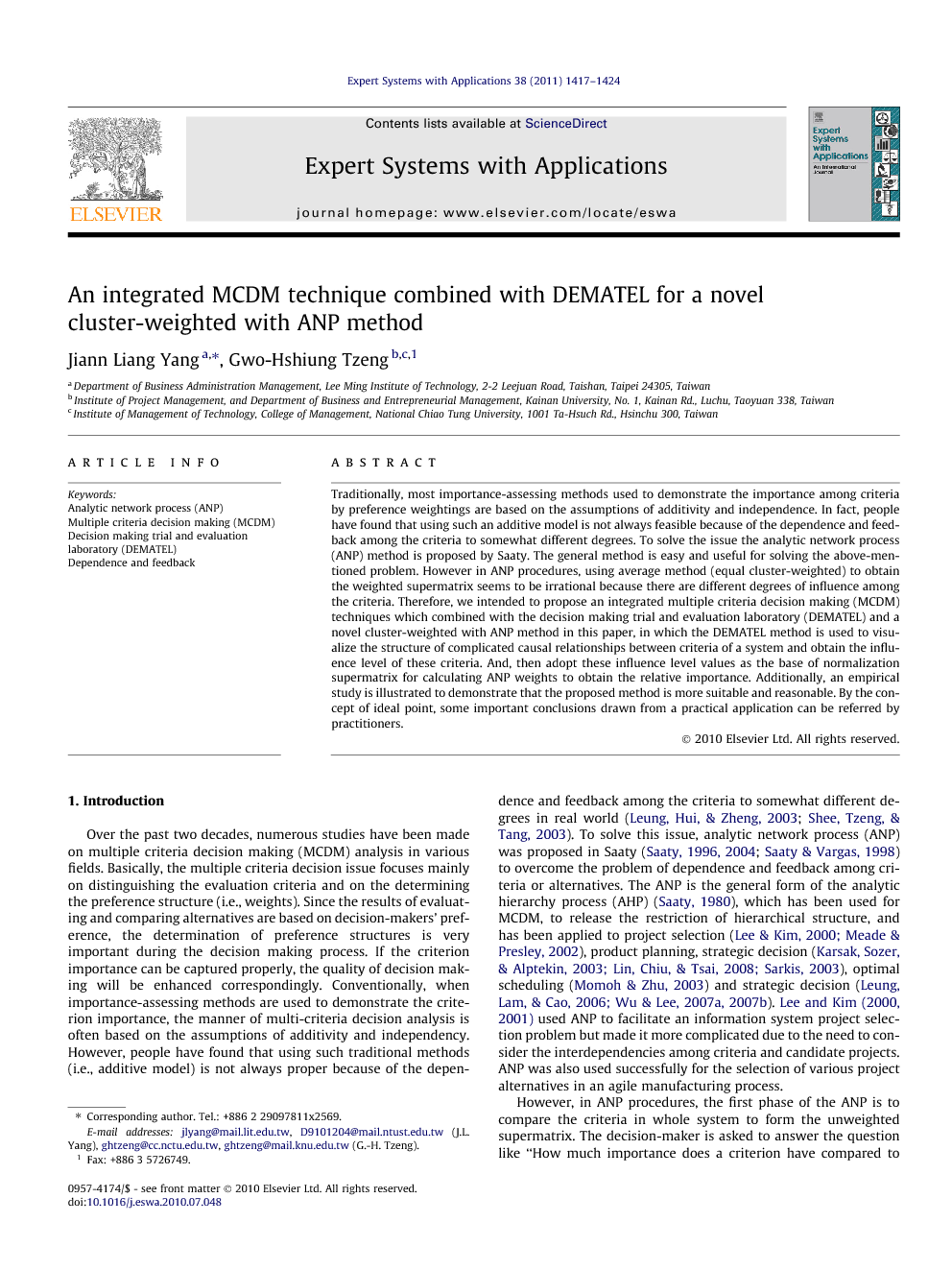 Traditionally, most importance-assessing methods used to demonstrate the importance among criteria by preference weightings are based on the assumptions of additivity and independence. In fact, people have found that using such an additive model is not always feasible because of the dependence and feedback among the criteria to somewhat different degrees. To solve the issue the analytic network process (ANP) method is proposed by Saaty. The general method is easy and useful for solving the above-mentioned problem. However in ANP procedures, using average method (equal cluster-weighted) to obtain the weighted supermatrix seems to be irrational because there are different degrees of influence among the criteria. Therefore, we intended to propose an integrated multiple criteria decision making (MCDM) techniques which combined with the decision making trial and evaluation laboratory (DEMATEL) and a novel cluster-weighted with ANP method in this paper, in which the DEMATEL method is used to visualize the structure of complicated causal relationships between criteria of a system and obtain the influence level of these criteria. And, then adopt these influence level values as the base of normalization supermatrix for calculating ANP weights to obtain the relative importance. Additionally, an empirical study is illustrated to demonstrate that the proposed method is more suitable and reasonable. By the concept of ideal point, some important conclusions drawn from a practical application can be referred by practitioners.

Over the past two decades, numerous studies have been made on multiple criteria decision making (MCDM) analysis in various fields. Basically, the multiple criteria decision issue focuses mainly on distinguishing the evaluation criteria and on the determining the preference structure (i.e., weights). Since the results of evaluating and comparing alternatives are based on decision-makers’ preference, the determination of preference structures is very important during the decision making process. If the criterion importance can be captured properly, the quality of decision making will be enhanced correspondingly. Conventionally, when importance-assessing methods are used to demonstrate the criterion importance, the manner of multi-criteria decision analysis is often based on the assumptions of additivity and independency. However, people have found that using such traditional methods (i.e., additive model) is not always proper because of the dependence and feedback among the criteria to somewhat different degrees in real world (Leung, Hui, & Zheng, 2003; Shee, Tzeng, & Tang, 2003). To solve this issue, analytic network process (ANP) was proposed in Saaty (Saaty, 1996 and Saaty, 2004; Saaty & Vargas, 1998) to overcome the problem of dependence and feedback among criteria or alternatives. The ANP is the general form of the analytic hierarchy process (AHP) (Saaty, 1980), which has been used for MCDM, to release the restriction of hierarchical structure, and has been applied to project selection (Lee and Kim, 2000 and Meade and Presley, 2002), product planning, strategic decision (Karsak et al., 2003, Lin et al., 2008 and Sarkis, 2003), optimal scheduling (Momoh & Zhu, 2003) and strategic decision (Leung et al., 2006, Wu and Lee, 2007a and Wu and Lee, 2007b). Lee and Kim, 2000 and Lee and Kim, 2001 used ANP to facilitate an information system project selection problem but made it more complicated due to the need to consider the interdependencies among criteria and candidate projects. ANP was also used successfully for the selection of various project alternatives in an agile manufacturing process. However, in ANP procedures, the first phase of the ANP is to compare the criteria in whole system to form the unweighted supermatrix. The decision-maker is asked to answer the question like “How much importance does a criterion have compared to another criterion with respect to our interests or preferences?” After forming the supermatrix, the weighted supermatrix is derived by transforming all columns sum to unity exactly (i.e., using average method). Next, the weighted supermatrix is raised to limiting powers to get the global priorities or called weights. It seems to be irrational while the weighted supermatrix is obtained by using average method. Because there are have different influence levels among criteria based on network relationship map (NRM). If we utilize the average method (equal cluster-weighted) to calculate the final global priorities, the results of the assessed weights would be higher or lower than the real situation. To this end, the decision making trial and evaluation laboratory (DEMATEL) method (Fontela & Gabus, 1976) is introduced to build the structure of relationship map for clarifying the interrelations among sub-criteria of a criterion, as well as to visualize the causal relationship of sub-systems through a causal diagram. The original DEMATEL was aim at searching the fragmented and antagonistic phenomena of world societies for integrated solutions. In recent years, the DEMATEL method has become very popular in Japan because it is especially pragmatic to visualize the structure of complicated causal relationships. The diagraph portrays a basic concept of contextual relation among the criteria of the system, in which the numeral represents the strength of influence. The method has been successfully applied to various circumstances, for example, developing global managers’ competencies (Wu and Lee, 2007a and Wu and Lee, 2007b), evaluating intertwined effects in e-learning programs (Tzeng, Chiang, & Li, 2007), airline safely measurement (Liou, Tzeng, & Chang, 2007), innovation Policy Portfolios for SIP mall industry (Huang & Tzeng, 2007), choice of knowledge management strategy (Wu, 2008), causal analytic method for group decision making (Lin & Wu, 2008), and selection management systems of SMEs (Tsai & Chou, 2009). Therefore, in this paper an integrated MCDM technique combined DEMATEL and ANP methods is proposed to solve this problem for overcoming the problem of interdependence and feedback between criteria and alternatives. Also, this study uses the DEMATEL method to obtain the influence degree of these criteria, and it would be regarded as the based of normalization supermatrix for calculating ANP weights to obtain the relative importance. In addition, an empirical study is illustrated to demonstrate that the proposed method is more suitable. Furthermore, we employ the concept of ideal-point by setting aspired/desired levels to represent the gaps between the performance of the appropriate vendor and the aspired/desired levels of each criterion. The remainder of this paper is organized as follows. In Section 2, we describe the concepts of DEMATEL and ANP methods in the proposed method. An empirical study is illustrated to demonstrate the proposed method is useful and suitable, and the results are addressed in Section 3. Discussions are presented in Section 4, and conclusions are presented in the last section.

Most importance-assessing methods used to demonstrate the importance of criteria are often based on the assumptions of additivity and independence. However, in fact, people have found that using such an additive model is not always suitable in real world because of the interdependence/interrelation among the criteria to somewhat different degrees. The ANP method is used to overcome the problems of dependence and feedback among criteria, but in the ANP method uses an average method which normalizes the cluster-weighted supermatrix. The results ignored the different influence degrees among criteria. To this end, we propose a novel concept to derive the cluster-weighted supermatrix to obtain the weights of criteria, in which the total-influence matrix is obtained and regarded as the base of normalization supermatrix for calculating ANP weights using DEMATEL method. Obviously, it is useful and feasible for solving the irrational situation. Through the causal diagram (Fig. 5), the complexity of a problem is easier to capture, so that profound decision can be made. Finally, we use an empirical applications in Taiwan is to demonstrate that the proposed method provides practitioners some important conclusions drawn from this case applications.