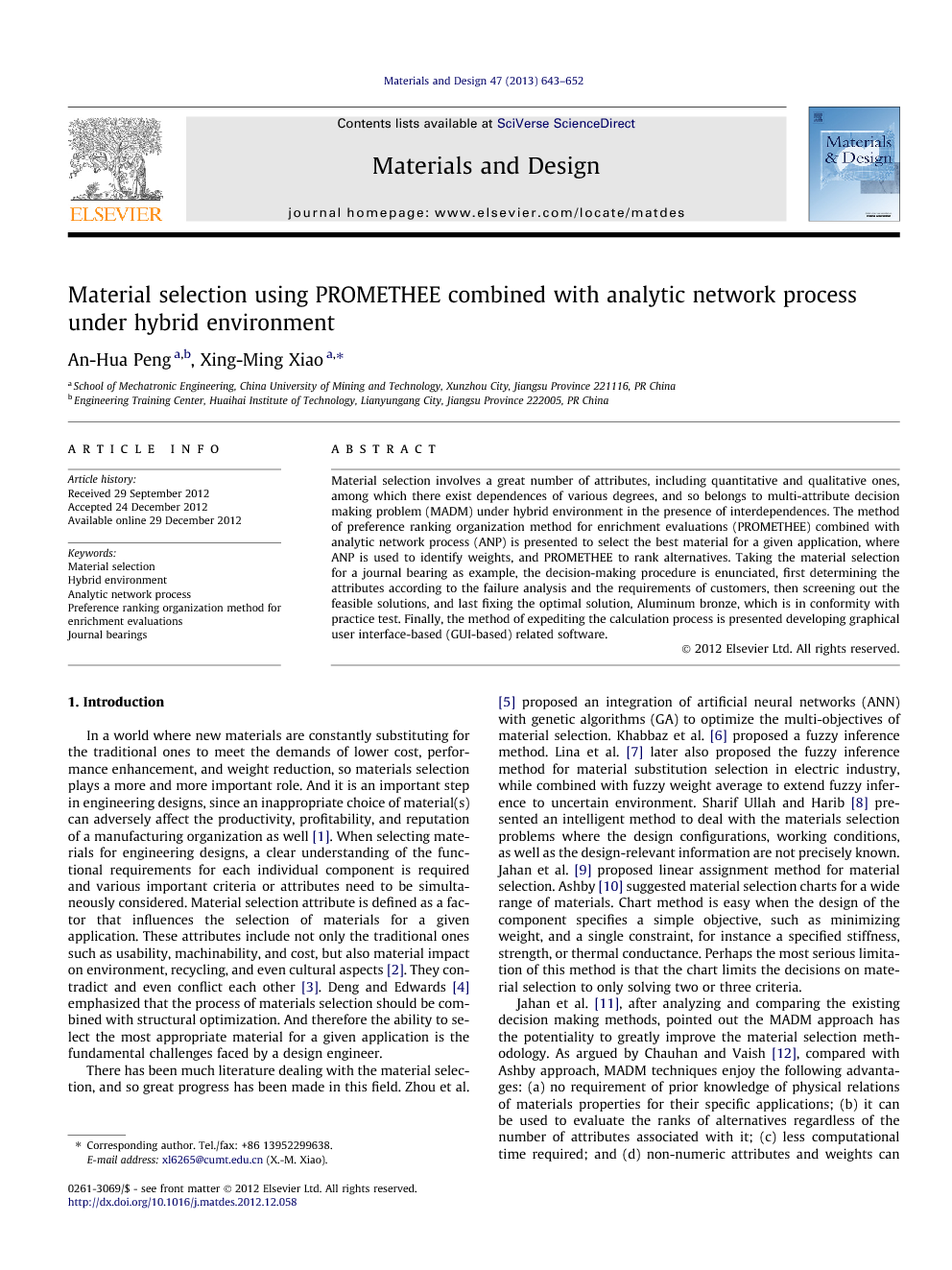 Material selection involves a great number of attributes, including quantitative and qualitative ones, among which there exist dependences of various degrees, and so belongs to multi-attribute decision making problem (MADM) under hybrid environment in the presence of interdependences. The method of preference ranking organization method for enrichment evaluations (PROMETHEE) combined with analytic network process (ANP) is presented to select the best material for a given application, where ANP is used to identify weights, and PROMETHEE to rank alternatives. Taking the material selection for a journal bearing as example, the decision-making procedure is enunciated, first determining the attributes according to the failure analysis and the requirements of customers, then screening out the feasible solutions, and last fixing the optimal solution, Aluminum bronze, which is in conformity with practice test. Finally, the method of expediting the calculation process is presented developing graphical user interface-based (GUI-based) related software.

From the performed research work using PROMETHEE combined with analytic network process under hybrid environment, the main conclusions and directions for future research can be summarized as follows.(1) Compared with target-based normalization technique in [13] by Jahan et al., the normalization method in this paper is characterized by the following unique advantages: (a) as for attribute types, it can be used not only for beneficial type, cost type, fixation type but also for deviation type, interval type, and deviated interval type, while the technique in [13] only for beneficial type, cost type, and fixation type; (b) as for attribute ratings, it can be used not only for exact values but also for interval values, while the technique in [13] only for exact values; (c) it can ensure any normalized ratings greater than zero, while, as for the technique in [13], the normalized rating to the worst one is zero, meaning the worst attribute plays not any role in ranking process, which is unreasonable and cannot be accepted. Due to the above mentioned advantages, the normalization method in this paper can be used in a hybrid environment. And in real life, more often than not, it is under a hybrid environment that the material selection is carried out and therefore it goes without saying that the normalization method in this paper is more suitable to real life.(2) Used to express qualitative attributes is 2- tuple linguistic terms, for which we need not to identify membership functions and which is relatively simpler than the other expressions such as triangular or trapezoidal fuzzy numbers. Used to identify weights is ANP, the result of which is more accurate than using AHP, due to considering the dependences among attributes which often occur in the real world. Used to rank is PROMETHEE, effectively eliminating “compensation effects” of the attribute ratings, and allowing weights to play more important role in alternative ranking.(3) The result using the proposed method in this paper matches well with the other methods such as WAA, TOPSIS, ELECTER, further indicating its feasibility and validity.(4) The calculating results in this paper are obtained through computer programming in software MATLAB, effectively addressing the problems of complex calculation. Allowing for a few designers who may not familiarize themselves with computer programming in software MATLAB, and to further expedite and easy the calculation process, developing graphical user interface-based (GUI-based) related software to automate all the calculations and suggest the best material is the important researches in the future. GUI is characterized by friendly interface, easy operation, and powerful function, and consists of such objects as window, menu, icon, button, etc. Selecting and activating them with a method, e.g. clicking mouse or keyboard, enables a computer according to user demands to complete scheduled tasks such as calculating or drawing, dispensing with the computer programming process.