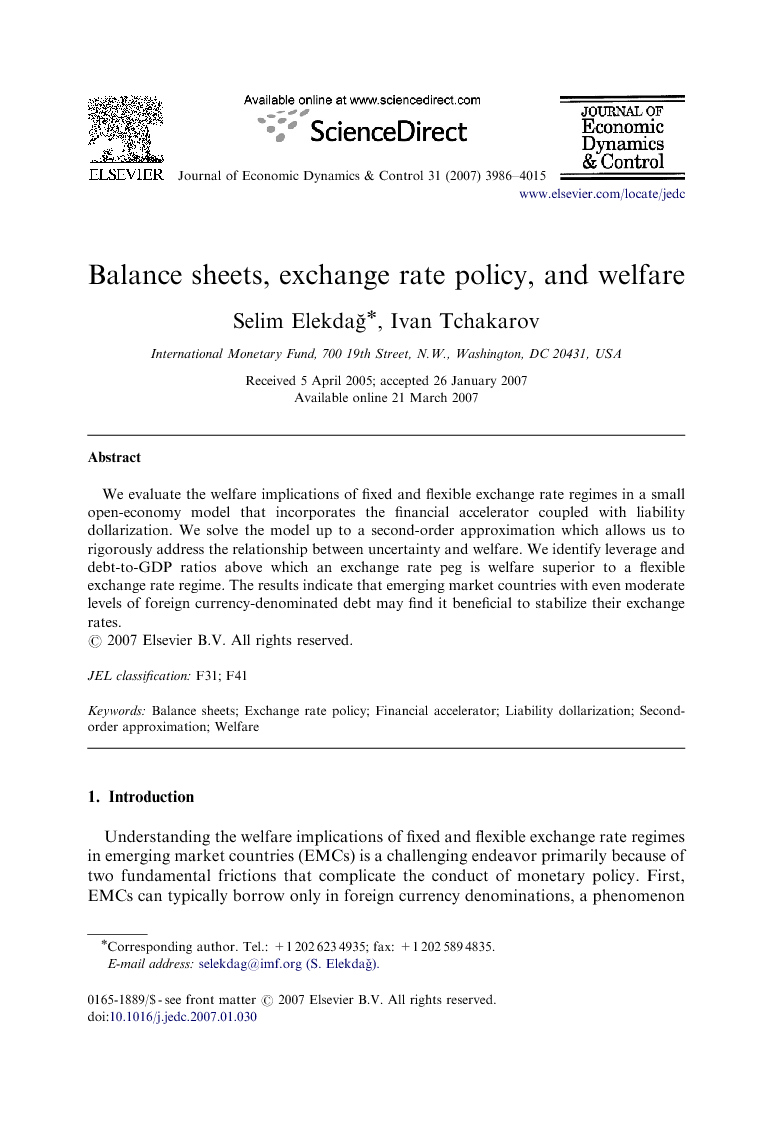 We evaluate the welfare implications of fixed and flexible exchange rate regimes in a small open-economy model that incorporates the financial accelerator coupled with liability dollarization. We solve the model up to a second-order approximation which allows us to rigorously address the relationship between uncertainty and welfare. We identify leverage and debt-to-GDP ratios above which an exchange rate peg is welfare superior to a flexible exchange rate regime. The results indicate that emerging market countries with even moderate levels of foreign currency-denominated debt may find it beneficial to stabilize their exchange rates.

Understanding the welfare implications of fixed and flexible exchange rate regimes in emerging market countries (EMCs) is a challenging endeavor primarily because of two fundamental frictions that complicate the conduct of monetary policy. First, EMCs can typically borrow only in foreign currency denominations, a phenomenon called ‘original sin’ by Eichengreen and Hausman (1999). Second, these countries usually have imperfect access to capital markets because foreign credit is associated with a countercyclical risk premium.1 These two frictions increase the vulnerability of EMCs to external shocks because a potential depreciation can substantially inflate the cost of borrowing – owing to currency mismatches – which would also increase the risk premium, thereby further constraining access to capital markets. Recent theoretical studies aim at capturing these fundamental frictions. These studies often use models incorporating the financial accelerator in combination with liability dollarization (where external debt is denominated in foreign currency). For example, Cespedes et al. (2004), Devereux et al. (2006), as well as Gertler et al. (2003) build upon the framework developed by Bernanke et al. (1999). These studies use the financial accelerator to model an endogenous risk premium that is linked to balance sheets thereby capturing the friction of imperfect capital market access. Nonetheless, these papers find that even after modeling both of these frictions, the conventional wisdom embodied in the Mundell–Fleming framework promoting the implementation of flexible exchange rate regime still prevails.2 The objective of this paper is to conduct a rigorous welfare-based comparison of exchange rate regimes for EMCs. In this context, we extend the earlier literature in two important dimensions. First, we perform a more thorough welfare evaluation of exchange rate regimes by employing a second-order approximation to the equilibrium conditions of a model that incorporates the financial accelerator in combination with liability dollarization. Employing a second-order approximation is critical because it captures the important effects of uncertainty on the average level of welfare.3 Second, we consider a broad range of leverage and debt-to-GDP ratios that allows us to uncover trade-offs between increasingly harsher balance sheet vulnerabilities and the role of expenditure switching. This is important because the welfare maximizing exchange rate regime for an EMC depends on the particular nature of its balance sheet vulnerabilities. We start by verifying that a flexible exchange rate regime is better than a fixed exchange rate in terms of welfare in a model where the financial accelerator is not present. This validates the policy recommendations of the standard Mundell–Fleming framework. In other words, with perfect capital markets, the presence of liability dollarization alone does not alter the classic policy prescription advocating flexible exchange rates for a small open economy.4 However, our main findings are related to the case when the financial accelerator is present. In particular, we identify debt thresholds above which the peg becomes welfare superior to the float. When we use a linearized model, it is only after the leverage ratio exceeds 413% – corresponding to a debt-to-GDP ratio of about 110% – that a flexible exchange rate delivers lower welfare. In contrast, when we solve the model using a second-order approximation – properly capturing the role of uncertainty – this threshold drops to a much lower level of 137% (corresponding to debt-to-GDP ratio of 79%). In fact, the leverage threshold based on the second-order accurate metric roughly coincides with the EMC average of 143% over the 1995–2004 sample. Once the impact of uncertainty on agents’ behavior is accounted for appropriately, the welfare costs of a float may exceed that of a peg even with moderate levels of outstanding debt. A precautionary saving motive by households offers insight into these results. Recall that under the peg, since the exchange rate is fixed by definition, adverse shocks need to be accommodated by a combination of a drawdown of foreign assets and a real adjustment. Therefore, to minimize the burden of adjustment on real variables – including consumption – households acquire a larger stock of assets under the peg than under the float. As we will discuss below, the financial accelerator magnifies the impact of shocks, and thus the effects of uncertainty, which in turn strengthens the desire to accumulate precautionary savings. With a higher amount of wealth under the peg, households are able to enjoy a larger average level of consumption, thereby raising welfare relative to the float. Our findings suggest that the conclusions of the papers cited above are not only sensitive to the choice of the welfare metric, but also to the calibration of the leverage ratio. As emphasized, the interaction between the level of indebtedness and the impact of uncertainty on agents’ average behavior is crucial for determining the most appropriate exchange rate regime. This implies that the gains associated with expenditure switching in the presence of significant balance sheet vulnerabilities could be lower than those reported in the literature.5 The remainder of the paper is organized as follows. Section 2 lays out the model, Section 3 presents the results, Section 4 confirms the robustness of our main findings, and Section 5 concludes.

This paper investigates the welfare implications of fixed and flexible exchange rate regimes in a small open-economy model that incorporates the financial accelerator in combination with liability dollarization. We solve the model using a second-order approximation in order to uncover the relationship between uncertainty and welfare. We confirm that the float has better welfare properties than the peg when the country has perfect access to international capital markets – despite the presence of foreign currency-denominated liabilities. However, when the model incorporating the financial accelerator is solved using a second-order expansion of the model, we find that a peg could become welfare superior to a float. Considering a wide range of leverage and debt-to-GDP ratios, we find that a peg becomes welfare superior to a float once the leverage ratio exceeds 137%. This contrasts with models relying on linear solution methods, which in our case would imply that this leverage threshold increases to a much higher 413%. Our robustness experiments show that the results implying the conclusions of some earlier papers in this literature are sensitive to not only the choice of the welfare metric, but also to the calibration of the leverage ratios. Therefore, the gains associated with expenditure switching in the presence of significant balance sheet vulnerabilities could be lower than those highlighted in the literature. Although based on a stylized model, the results suggest that EMCs with even moderate levels of foreign currency-denominated debt may find it beneficial to stabilize their exchange rates.