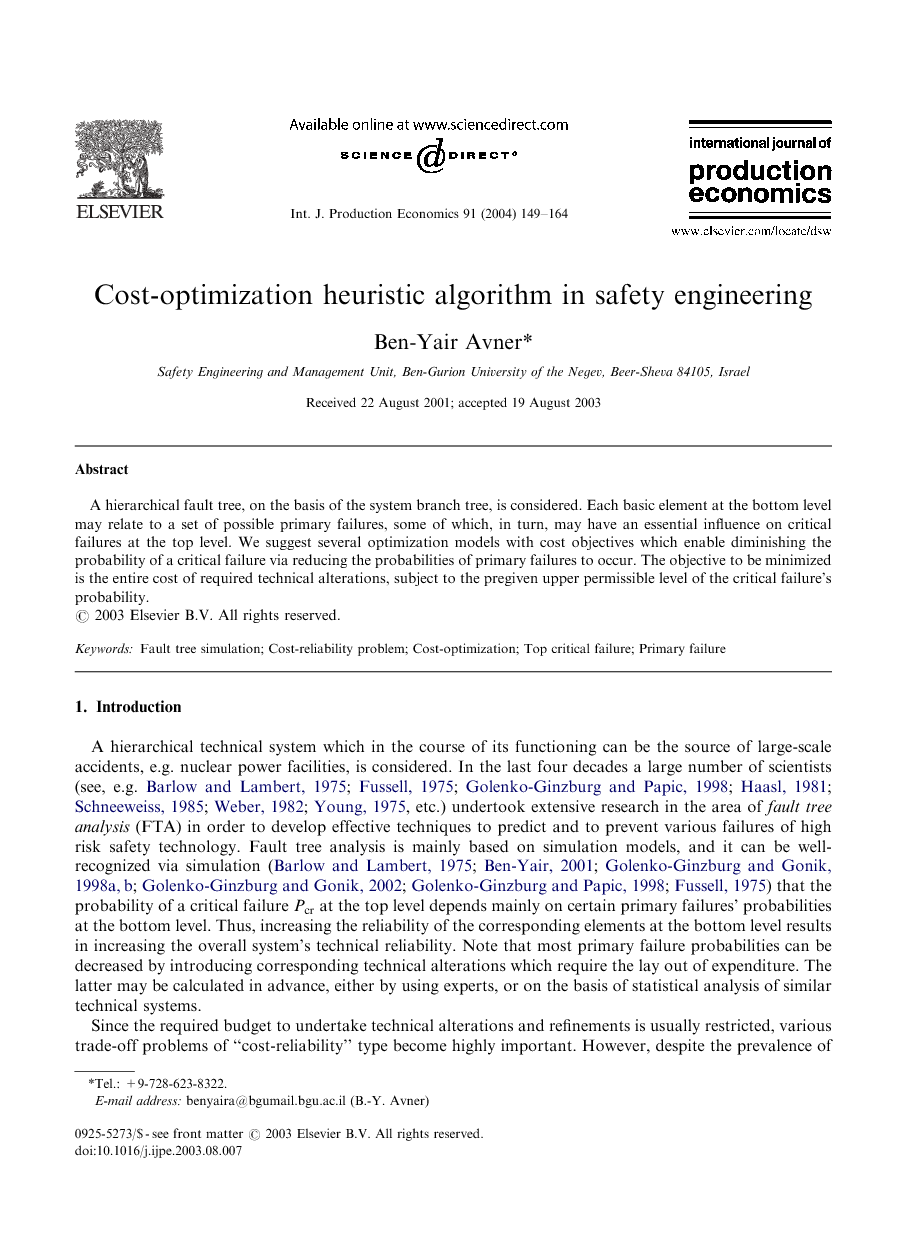 A hierarchical fault tree, on the basis of the system branch tree, is considered. Each basic element at the bottom level may relate to a set of possible primary failures, some of which, in turn, may have an essential influence on critical failures at the top level. We suggest several optimization models with cost objectives which enable diminishing the probability of a critical failure via reducing the probabilities of primary failures to occur. The objective to be minimized is the entire cost of required technical alterations, subject to the pregiven upper permissible level of the critical failure's probability.

A hierarchical technical system which in the course of its functioning can be the source of large-scale accidents, e.g. nuclear power facilities, is considered. In the last four decades a large number of scientists (see, e.g. Barlow and Lambert, 1975; Fussell, 1975; Golenko-Ginzburg and Papic, 1998; Haasl, 1981; Schneeweiss, 1985; Weber, 1982; Young, 1975, etc.) undertook extensive research in the area of fault tree analysis (FTA) in order to develop effective techniques to predict and to prevent various failures of high risk safety technology. Fault tree analysis is mainly based on simulation models, and it can be well-recognized via simulation (Barlow and Lambert, 1975; Ben-Yair, 2001; Golenko-Ginzburg and Gonik (1998a) and Golenko-Ginzburg and Gonik (1998b); Golenko-Ginzburg and Gonik, 2002; Golenko-Ginzburg and Papic, 1998; Fussell, 1975) that the probability of a critical failure Pcr at the top level depends mainly on certain primary failures’ probabilities at the bottom level. Thus, increasing the reliability of the corresponding elements at the bottom level results in increasing the overall system's technical reliability. Note that most primary failure probabilities can be decreased by introducing corresponding technical alterations which require the lay out of expenditure. The latter may be calculated in advance, either by using experts, or on the basis of statistical analysis of similar technical systems. Since the required budget to undertake technical alterations and refinements is usually restricted, various trade-off problems of “cost-reliability” type become highly important. However, despite the prevalence of FTA, publications on cost-optimization problems in Safety Engineering within the last decades are very scanty (see, e.g. Kuo and Prasad, 2000). They practically do not cover cases of complicated hierarchical technical systems with primary failures at the lower levels and top critical failures at the upper level. Few publications on reliability optimization problems with cost parameters for large-scale systems boil down to the study of various network communications problems (Li and Haimes, 1992), as well as problems of determining optimal levels of component reliabilities and redundancies with respect to multiple objectives (Sakawa, 1981). The results obtained in the area of cost-reliability models for stochastic projects (Golenko-Ginzburg and Gonik (1998a) and Golenko-Ginzburg and Gonik (1998b); Golenko-Ginzburg and Gonik, 2002), cannot be applied to engineering systems with hierarchical structure, as well as to hierarchical fault trees. Consider, that all primary failures at the system's bottom level are enumerated by Fξ, 1⩽ξ⩽Q. Denote the corresponding primary failure probability by Pξ. Assume that, by introducing possible technical improvements, value Pξ can be decreased but cannot become less than its lower bound View the MathML source which is usually obtained by using expert systems. Determine the corresponding “probability step” ΔPξ, i.e., a constant reduction, in order to undertake a whole number of steps to reduce the probability of primary failure Fξ from Pξ to View the MathML source. Denote the corresponding number of steps by Nξ. Thus, relation View the MathML source holds. Introducing technical improvements to diminish the primary failure probability by one step requires cost expenditures which are pregiven as well. Denote a top critical failure by Fcr with its corresponding probability Pcr. Assume that value Pcr is high enough and has to be reduced in order not to exceed the prescribed upper level Pcr*. The newly developed cost-optimization problem (the direct problem) is to determine improved primary failures probabilities Pξfξ of Fξ after undertaking fξ consecutive steps (fξ being the step index), View the MathML source, which require the minimal accumulated costs to undertake all technical improvements, subject to reliability constraint, i.e., the top level critical probability not to exceed the pregiven upper level Pcr*. Another cost-optimization problem—the dual one—centers on minimizing the failure probability subject to the cost constraint, i.e., to the restricted budget to carry out the technical improvements. Both problems have been solved by using a heuristic cost-optimization algorithm via simulation. A numerical example to check the fitness of the algorithm is presented.

1. Our research is based on the fault tree simulation, according to all implemented logical links, from bottom to top, i.e., until the top fault tree elements are reached. Using the fault tree simulation model enables realizing cost-optimization problems which result in reducing the probability of the top level critical failure by means of undertaking certain technical alterations to reduce probabilities of certain primary failures at the bottom level. There is a certain trade-off in minimizing the budget aimed for this purpose, and in minimizing the probability of the regarded top critical failure. 2. We have developed the following cost-optimization problems: (a) to minimize the amount of budget assignments to undertake all technical improvements, subject to the restricted from above desired probability value of the top critical failure (the direct problem); and (b) to minimize the probability of the top critical failure subject to the restricted budget to carry out technical refinements (the dual problem). 3. The cost-optimization models are easy to use and can be implemented on a PC. They are applicable to a broad spectrum of hierarchical technical systems with a possibility of hazardous failure at the top level and a pregiven multi-linkage of failure elements at different levels of the fault tree. The computational time of obtaining a quasi-optimal solution justifies the usefulness of the developed algorithm. 4. Note that we have implemented an assumption of constant cost increase ΔCξf when the failure probability is reduced by a constant probability step ΔPξ. The validity of such an assumption has to be justified by experts and is realistic in certain cases. However, even in cases of non-constant values ΔCξf the developed general approach can still be utilized for practical applications, although the algorithm becomes more complicated. 5. As far as we are concerned the developed cost-optimization models are the first publications in the area of hierarchical fault tree analysis. Similar research done by other authors has not been published as yet. 6. The developed cost-simulation models enable undertaking a man–machine dialog between decision-makers and a technical system with possible hazardous failures. In order to prevent those failures, urgent on-line control actions may be introduced in the course of such a dialog. 7. It can be well-recognized that the computational time to implement fault tree analysis increases together with the complexity of the hazardous technical system. Thus, new modern high-speed computers have to be involved. However, computational time required for enhancing Safety Engineering, may prove to be insignificant as compared with the possible damage inflicted by a major hazardous failure scenario.