عنوان انگلیسی
Transition to IFRS and compliance with mandatory disclosure requirements: What is the signal?
دانلود فوری مقاله + سفارش ترجمه 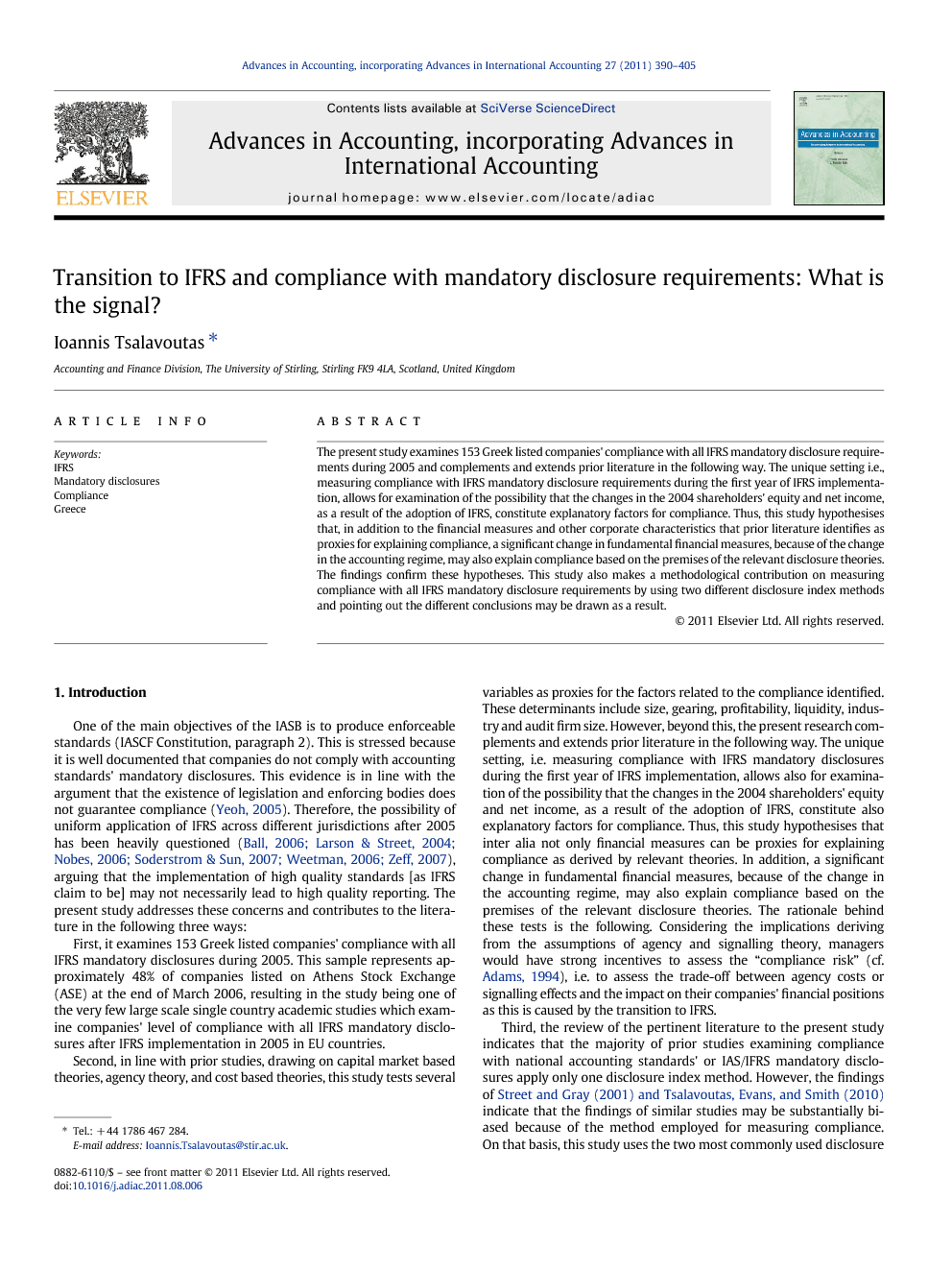 The present study examines 153 Greek listed companies' compliance with all IFRS mandatory disclosure requirements during 2005 and complements and extends prior literature in the following way. The unique setting i.e., measuring compliance with IFRS mandatory disclosure requirements during the first year of IFRS implementation, allows for examination of the possibility that the changes in the 2004 shareholders' equity and net income, as a result of the adoption of IFRS, constitute explanatory factors for compliance. Thus, this study hypothesises that, in addition to the financial measures and other corporate characteristics that prior literature identifies as proxies for explaining compliance, a significant change in fundamental financial measures, because of the change in the accounting regime, may also explain compliance based on the premises of the relevant disclosure theories. The findings confirm these hypotheses. This study also makes a methodological contribution on measuring compliance with all IFRS mandatory disclosure requirements by using two different disclosure index methods and pointing out the different conclusions may be drawn as a result.

One of the main objectives of the IASB is to produce enforceable standards (IASCF Constitution, paragraph 2). This is stressed because it is well documented that companies do not comply with accounting standards' mandatory disclosures. This evidence is in line with the argument that the existence of legislation and enforcing bodies does not guarantee compliance (Yeoh, 2005). Therefore, the possibility of uniform application of IFRS across different jurisdictions after 2005 has been heavily questioned (Ball, 2006, Larson and Street, 2004, Nobes, 2006, Soderstrom and Sun, 2007, Weetman, 2006 and Zeff, 2007), arguing that the implementation of high quality standards [as IFRS claim to be] may not necessarily lead to high quality reporting. The present study addresses these concerns and contributes to the literature in the following three ways: First, it examines 153 Greek listed companies' compliance with all IFRS mandatory disclosures during 2005. This sample represents approximately 48% of companies listed on Athens Stock Exchange (ASE) at the end of March 2006, resulting in the study being one of the very few large scale single country academic studies which examine companies' level of compliance with all IFRS mandatory disclosures after IFRS implementation in 2005 in EU countries. Second, in line with prior studies, drawing on capital market based theories, agency theory, and cost based theories, this study tests several variables as proxies for the factors related to the compliance identified. These determinants include size, gearing, profitability, liquidity, industry and audit firm size. However, beyond this, the present research complements and extends prior literature in the following way. The unique setting, i.e. measuring compliance with IFRS mandatory disclosures during the first year of IFRS implementation, allows also for examination of the possibility that the changes in the 2004 shareholders' equity and net income, as a result of the adoption of IFRS, constitute also explanatory factors for compliance. Thus, this study hypothesises that inter alia not only financial measures can be proxies for explaining compliance as derived by relevant theories. In addition, a significant change in fundamental financial measures, because of the change in the accounting regime, may also explain compliance based on the premises of the relevant disclosure theories. The rationale behind these tests is the following. Considering the implications deriving from the assumptions of agency and signalling theory, managers would have strong incentives to assess the “compliance risk” (cf. Adams, 1994), i.e. to assess the trade-off between agency costs or signalling effects and the impact on their companies' financial positions as this is caused by the transition to IFRS. Third, the review of the pertinent literature to the present study indicates that the majority of prior studies examining compliance with national accounting standards' or IAS/IFRS mandatory disclosures apply only one disclosure index method. However, the findings of Street and Gray, 2001 and Tsalavoutas et al., 2010 indicate that the findings of similar studies may be substantially biased because of the method employed for measuring compliance. On that basis, this study uses the two most commonly used disclosure index methods (Cooke's method and the PC method — see Section 3 for more details) and tests the significance of the differences in the compliance scores identified. Additionally, it explores the implications of the application of both methods with regard to determinants of compliance with IFRS mandatory disclosures. In contrast to Street and Gray (2001), this study considers as valid findings only the compliance determinants being significant under both methods. Greece offers a suitable as well as an interesting setting because of its distinctive financial reporting environment. The accounting/audit profession is relatively young (Baralexis, 2004) and enforcement of accounting regulation is very weak (Baralexis, 2004 and La Porta et al., 1998). Hence, it is highly probable that this background would allow for large differences of compliance levels across listed companies compared to Anglo-Saxon countries. Additionally, ASE is regarded as a developed market since 2000 (FTSE, 2009 and Mantikidis, 2000) and almost 50% of the market capitalisation belonged to foreign investors at the end of March 2006 (Central Security Depository, 2006). Thus, there is not only national, but also international interest in the quality of Greek listed companies' financial statements.

The present study builds on and contributes to literature examining compliance with national accounting standards and/or IAS/IFRS. It contributes to this literature in the following three ways. First, it adds a large scale academic study examining compliance with all IFRS mandatory disclosures after 2005 in the EU. Second, it provides evidence regarding the implications of the use of different methods for measuring compliance with mandatory disclosures. Third, it provides evidence regarding the explanatory factors of compliance levels with IFRS mandatory disclosures, during the first year of IFRS implementation. The findings of the present study illustrate a relatively low average level of compliance with IFRS mandatory disclosures in 2005 by Greek listed companies. This approximates to 80% (actual levels depend on the method employed for measuring compliance). It is also indicative that there is considerable variation in the compliance scores identified: standard deviations are 10% or 8%, depending on the method employed for measuring compliance. These compliance levels, which may be considered low for a developed market, reflect on the lenient approach of the regulator regarding compliance with IFRS during the initial period of their implementation. Further analyses, on a standard by standard basis, indicate that standards that introduced new measurement and/or recognition requirements compared to Greek GAAP, exhibit very low average levels of compliance. They also exhibit significantly high variability of compliance scores. Similar is the case for the standards that require disclosures that involve high proprietary costs. Additionally, there were instances where companies did not provide any of the information required by specific standards. Overall, the relatively high non-compliance levels identified confirm the concerns expressed in the literature regarding the role that enforcement mechanisms play in the achievement of a successful level of comparability across jurisdictions that adopt IFRS (e.g. Ball, 2006, Giner and Rees, 2005, Nobes, 2006, Schipper, 2005 and Weetman, 2006). In fact, the findings of the present study are in favour of the argument raised by Nobes and Parker (2008: 195) that “weak legislation, lack of resources and ineffective audit profession in some EU countries make compliance with IFRS in practice voluntary”. Further, the present study provides strong evidence that companies having the following characteristics comply most with IFRS mandatory disclosures in 2005: those having a “Big 4” auditor; those exhibited more positive changes in their restated IFRS 2004 net profit figure; and those exhibited more negative changes in their restated IFRS 2004 shareholders' equity figure. With regard to the two restated measures, as discussed above, there have been consistent findings of earnings management by Greek listed companies. The areas of creative accounting practices followed under Greek GAAP were expected to be curtailed with the introduction of IFRS. Accordingly, the latter was expected to cause a significant impact on companies' financial statements. The findings by Tsalavoutas and Evans, 2010, Hellenic Capital Market Commission (HCMC)., 2006 and Grant Thornton, 2006 indicate that implementation of IFRS inter alia did indeed have a significant impact on the financial reported position and performance of Greek listed companies. In many instances this significant impact appears to be material. On that basis, the findings of the present study indicate that such a significant change, in companies' restated measures, has acted as a driving factor for companies' compliance with IFRS overall mandatory disclosure requirements in 2005. Hence, the results of this study indicate that the compliance risks that managers bear are heavily dependent on the impact caused on their companies' financial position and performance, as a result of the adoption of IFRS. Additionally, propositions of agency and signalling theories provide the basis for interpreting these findings. As far as audit firm size is concerned, considering the particular context of Greece, these findings are consistent with prior evidence that higher earnings management as well as lower audit effort is well documented for companies with small auditors. Thus, employing a “Big 4” audit firm acts as a monitoring mechanism and satisfies the need for transparency and better quality financial statements. This leads to a reduction of agency costs and results in higher levels of compliance. Finally, from a methodological point of view, the findings of this study provide strong evidence that using only one method for measuring compliance with mandatory disclosures may produce misleading perception about the extent to which companies comply with the standards' requirements. Beyond this, using only one method may also have implications with regard to the explanatory factors that appear to be significantly associated with the levels of compliance identified. Accordingly, this study suggests simultaneous use of both the commonly used dichotomous approach and the PC method as they were employed in this study. Accordingly, the findings of this research should be of particular interest to researchers aiming to conduct studies on compliance with IFRS mandatory disclosure requirements. They should also be of particular interest to practitioners reading studies reporting compliance with IFRS mandatory disclosure requirements. A major strength of the study is that the results are time specific, i.e. focusing on the first year of mandatory implementation of IFRS. However, this might also present a limitation. It may give a misleading perception about the companies' compliance behaviour. Prior research indicates that companies' disclosures increase overtime (e.g. Hassan et al., 2006 and Peng et al., 2008). Thus, the relatively low levels of disclosures identified might be an outcome of preparers' low familiarity with the disclosure requirements of the new standards. Consequently compliance levels may improve in the future. Additionally, the findings of the present research suggest that the impacts reported in companies' reconciliation statements with regard to shareholders' equity and net income are associated with compliance levels in 2005. However, in the years to follow companies will not have to produce reconciliation statements and thus these explanatory factors will not be testable. As a result, future research could explore what are the most important determinants of compliance with IFRS mandatory disclosures after 2005.