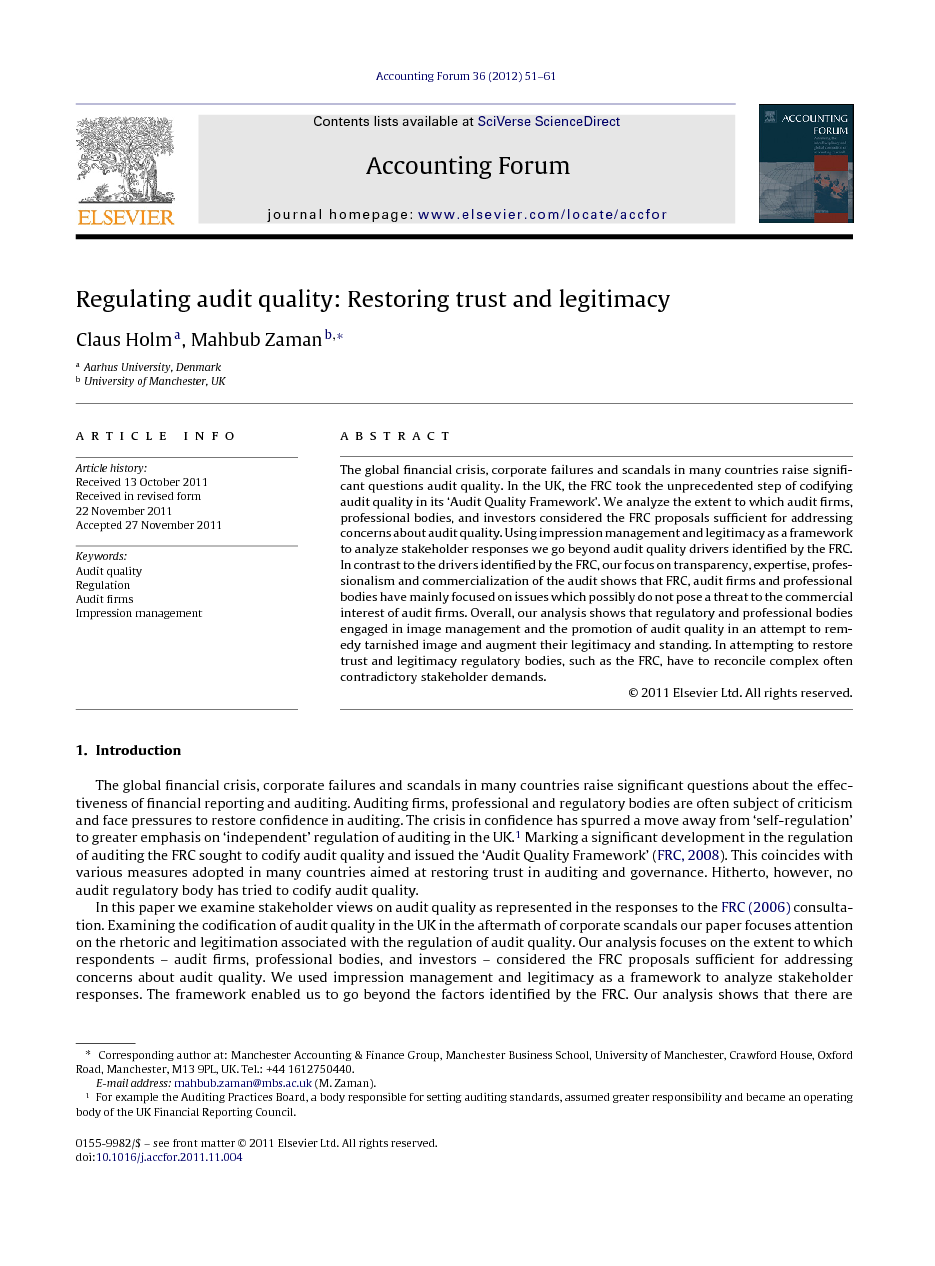 The global financial crisis, corporate failures and scandals in many countries raise significant questions audit quality. In the UK, the FRC took the unprecedented step of codifying audit quality in its ‘Audit Quality Framework’. We analyze the extent to which audit firms, professional bodies, and investors considered the FRC proposals sufficient for addressing concerns about audit quality. Using impression management and legitimacy as a framework to analyze stakeholder responses we go beyond audit quality drivers identified by the FRC. In contrast to the drivers identified by the FRC, our focus on transparency, expertise, professionalism and commercialization of the audit shows that FRC, audit firms and professional bodies have mainly focused on issues which possibly do not pose a threat to the commercial interest of audit firms. Overall, our analysis shows that regulatory and professional bodies engaged in image management and the promotion of audit quality in an attempt to remedy tarnished image and augment their legitimacy and standing. In attempting to restore trust and legitimacy regulatory bodies, such as the FRC, have to reconcile complex often contradictory stakeholder demands.

Corporate malpractices provided a fresh impetus to the debate concerning audit quality. Coinciding with various measures adopted in many countries aimed at restoring trust in auditing and governance, the Financial Reporting Council's attempt to develop an ‘Audit Quality Framework’ (FRC, 2008) marked a significant development in the UK. No other regulatory body has tried, or felt the need, to codify audit quality. In the context of existing academic research on audit quality, this paper focused on the response of three groups – professional accounting bodies, audit firms and investors – to the FRC's (2006) discussion paper Promoting Audit Quality. We have found that overall all three groups generally supported the FRC's approach, but they considered the FRC's response insufficient. We found that respondent groups advanced various points indicating the need for FRC to address additional issues in order to improve audit quality. To legitimise its existence the auditing profession has a vested interest in convincing users that accountants can be trusted. Regulatory pronouncements and audit firms’ engagement in the post-Enron debate relating to audit quality show an evident concern with protecting the profession. In contrast to investors, responses to the FRC audit quality initiative from audit firms and professional bodies display concern with protecting the interests of the professional accounting body corporate and its individual members. In expressing their position audit firms, however, were concerned with preventing too much prescription and emphasised the importance of recognising the role of professional judgements in audit quality. Whilst generally appearing supportive of the FRC proposals, audit firms were, however, keen to emphasise the role of other parties, in particular that of audit committees in promoting audit quality. The focus of our analysis in this paper went beyond the issues identified by the FRC which do not directly threaten the commercial interest of audit firms. We focused on underlying concerns centering on issues related to the expertise and professionalism of auditors, commercialization of audit, and the transparency of the audit process as well as that of audit firms that have not received much regulatory attention. Whilst the FRC and audit firms focused on technical issues relating to the audit, these four issues remained largely unaddressed in the FRC's Audit Quality Framework. Our analysis thus shows that audit quality is not just a mere technical phenomenon, but is also part of the rhetoric employed by regulators, professional bodies and audit firms in the aftermath of corporate failures and resulting lack of trust in auditing. In contrast to the drivers identified by the FRC, our focus on transparency, expertise, professionalism and commercialization shows that FRC, audit firms and professional bodies have mainly focused on issues which possibly do not pose a threat to the commercial interest of audit firms. Interestingly, the notion of audit quality, in particular the drivers identified by the FRC is not based on any systematic analysis of audit failures.9 In attempting to restore trust and legitimacy regulatory bodies, such as the UK Financial Reporting Council, have to reconcile complex often contradictory stakeholder demands. Overall, our analysis shows that regulatory and professional bodies engaged in image management and the promotion of audit quality in an attempt to remedy its tarnished image and augment its legitimacy and standing. Also, concerns over potential damage to the profession and its members often tended to dominate the responses. Our paper has a number of limitations. The analysis in our paper has been limited to responses to the FRC's discussion paper and does not extend to examining other related initiatives taken in the UK nor to tracing (any) changes in regulators, professional bodies’ or audit firms position on audit quality issues over a period. Such an examination is worthy of future research as it has the potential to extend and provide complementary insights into the issues examined in our paper. Additionally, reliance on response letters does not provide evidence of audit quality in practice. Further empirical research is needed on how external regulatory initiatives permeate into audit firms and affect audit practice. Similarly, given the increasing emphasis on audit committees as a monitor of audit quality research examining their effect on the actual conduct of audit in different institutional and regulatory settings can make a valuable contribution to the literature on audit quality. In undertaking such empirical investigation, researchers should also examine the conditions affecting loose/de-coupling between regulatory pronouncements about audit quality and the actual performance of audit.