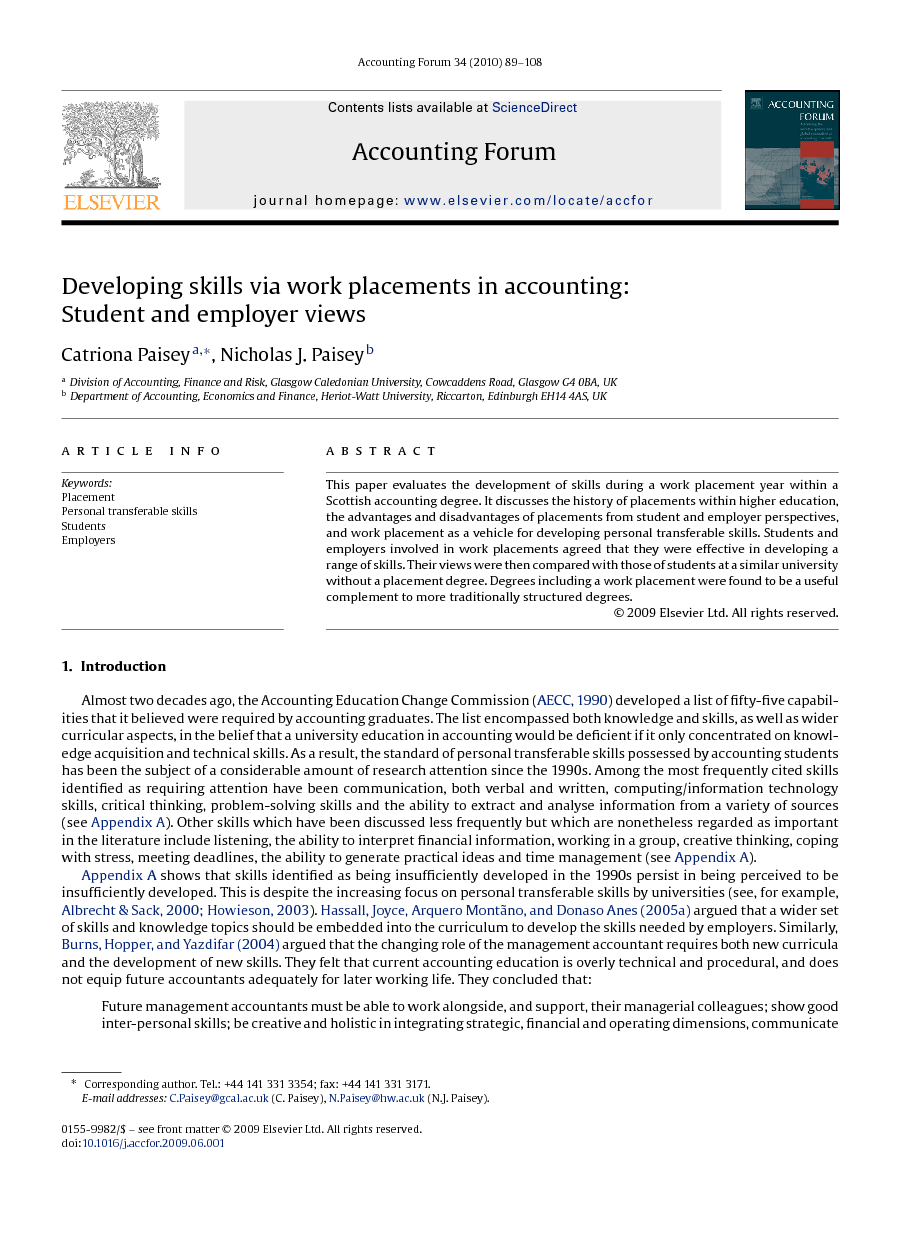 Almost two decades ago, the Accounting Education Change Commission (AECC, 1990) developed a list of fifty-five capabilities that it believed were required by accounting graduates. The list encompassed both knowledge and skills, as well as wider curricular aspects, in the belief that a university education in accounting would be deficient if it only concentrated on knowledge acquisition and technical skills. As a result, the standard of personal transferable skills possessed by accounting students has been the subject of a considerable amount of research attention since the 1990s. Among the most frequently cited skills identified as requiring attention have been communication, both verbal and written, computing/information technology skills, critical thinking, problem-solving skills and the ability to extract and analyse information from a variety of sources (see Appendix A). Other skills which have been discussed less frequently but which are nonetheless regarded as important in the literature include listening, the ability to interpret financial information, working in a group, creative thinking, coping with stress, meeting deadlines, the ability to generate practical ideas and time management (see Appendix A). Appendix A shows that skills identified as being insufficiently developed in the 1990s persist in being perceived to be insufficiently developed. This is despite the increasing focus on personal transferable skills by universities (see, for example, Albrecht and Sack, 2000 and Howieson, 2003). Hassall, Joyce, Arquero Montãno, and Donaso Anes (2005a) argued that a wider set of skills and knowledge topics should be embedded into the curriculum to develop the skills needed by employers. Similarly, Burns, Hopper, and Yazdifar (2004) argued that the changing role of the management accountant requires both new curricula and the development of new skills. They felt that current accounting education is overly technical and procedural, and does not equip future accountants adequately for later working life. They concluded that: Future management accountants must be able to work alongside, and support, their managerial colleagues; show good inter-personal skills; be creative and holistic in integrating strategic, financial and operating dimensions, communicate effectively in oral arenas; and be proactive. These skills are not new but they are becoming increasingly important. Yet, they are still often not emphasised in education, training and assessment (Burns et al., 2004, p. 20). The above views assume that graduates of the future will require a wider range of skills than may have been expected of them in the past (Peters, 2000). Peters (2000) questions whether universities are in a position to foster these skills and university/industry linkages have for a long time been viewed as a means of transferring knowledge and skills as part of a two-way process (Segal Quince Wicksteed, 1988). This paper examines a curriculum development that integrates accounting education and the business world, provides an alternative environment for the development of an expanded range of personal transferable skills and offers an innovative curricular structure as an alternative to traditionally structured, university-based accounting degrees. The paper's aim is to evaluate the development of personal transferable skills via a work placement year within an accounting degree at a Scottish university, with an emphasis on the views of students and employers. While focusing on a degree in a UK context, the paper also discusses work placements generally as the underlying issues have wider relevance. Since the insights gained from any one university will have limited validity, it was decided to compare the views of students at the university offering a work placement with the views of students at another, similar, university where work placements are not available. These comparisons therefore provide additional insight into the perceived value of a work placement. The remainder of this paper is structured as follows. The history of placement provision within higher education is discussed, followed by an assessment of the benefits of placements from both student and employer perspectives, and also potential disadvantages. The context of the study and the research method adopted to assess work placement as a vehicle for the development of personal transferable skills are then explained before presenting and discussing the results of a study of the views of students and employers who have participated in work placement. These results are then compared with the views of students who do not have the opportunity to undertake a placement. Finally, conclusions and recommendations for future research are offered.

The above findings show that the students at University A were highly career-orientated and the opportunity to undertake a placement was an important consideration in their choice of higher education institution. Both students and their supervisors perceived the gaining of ‘real life’ experience to be an important benefit of undertaking a work placement. There was considerable satisfaction with the placement experience and the placement had influenced the career plans of most students. The career-orientated nature of the students involved in this programme is important in any interpretation of student perceptions of the development of skills on the degree programme. There was considerable agreement among both students and supervisors about the development of a wide variety of skills. The fact that there was a high level of agreement between the views of students and supervisors lends weight to the argument that work placement appears to be an effective vehicle for the development of some skills. However, it is clear that other skills may be more suited to being developed elsewhere in the degree programme. A number of gender differences were found. Male and female students displayed differences in their perceived benefits of work placement. Females were more likely to consider the chance to try accountancy work more highly and the opportunity to earn money less highly than their male counterparts. Females also ranked the development of five skills significantly more highly than male students. This finding relates to perceptions and not to the development of skills per se, but is important as it lends weight to the view that the sexes do hold differing views about aspects of their own abilities. Of course, it is possible that the male and female students carried out different roles within firms, which could have contributed to the differences discussed above. However, the job descriptions of the various posts held by students suggest that the roles did not differ. There were differences in the perception of the development of skills in professional firms compared with industry. Those working in professional environments regarded the opportunity to undertake a placement more highly than those in industry and felt that their ability to extract and analyse information from a variety of sources and the ability to interpret financial information had been developed more fully. Those in industry felt that their computer ability had been more highly developed. Thus, the workplace setting is important and skills appear to be developed to differing extents depending upon the nature of the work undertaken. Data was collected for four consecutive year groups. While a number of differences arose between groups, most occurred among the third cohort of placement students. No obvious reasons for such differences should be discerned and, while the differences are relatively minor, the finding does point to the fact that students should not be regarded as a homogenous group. The number of students surveyed was limited by the number of students on the placement programme. Nonetheless, the response rate of 90% was high and the results show a high level of agreement among students about their placement experience. The number of placement supervisors was necessarily small but the response rate of 59% was high and the results show a high level of agreement between the views of supervisors and students. Taken together, the findings of both questionnaire surveys suggest that work placement had successfully developed a range of personal transferable skills in students. The degree achieved this whilst also providing sufficient coverage of academic subjects to gain maximum exemptions from the professional accountancy bodies. Additional insight into the placement experience can be gained by comparing the results for University B. Students at University B perceived their skills’ development to be different, indicating that degrees of different types in different loci can be expected to produce variations in skills’ development. Most students at University B recognised the value of undertaking a work placement and would have liked to have had the opportunity to do so. Most of these students had paid employment but their jobs were low level and poorly paid. Given that these students reported different perceptions of skills development, it is reasonable to conclude that the skills’ development fostered by work placement differs from that fostered in part-time, low-skill employment.