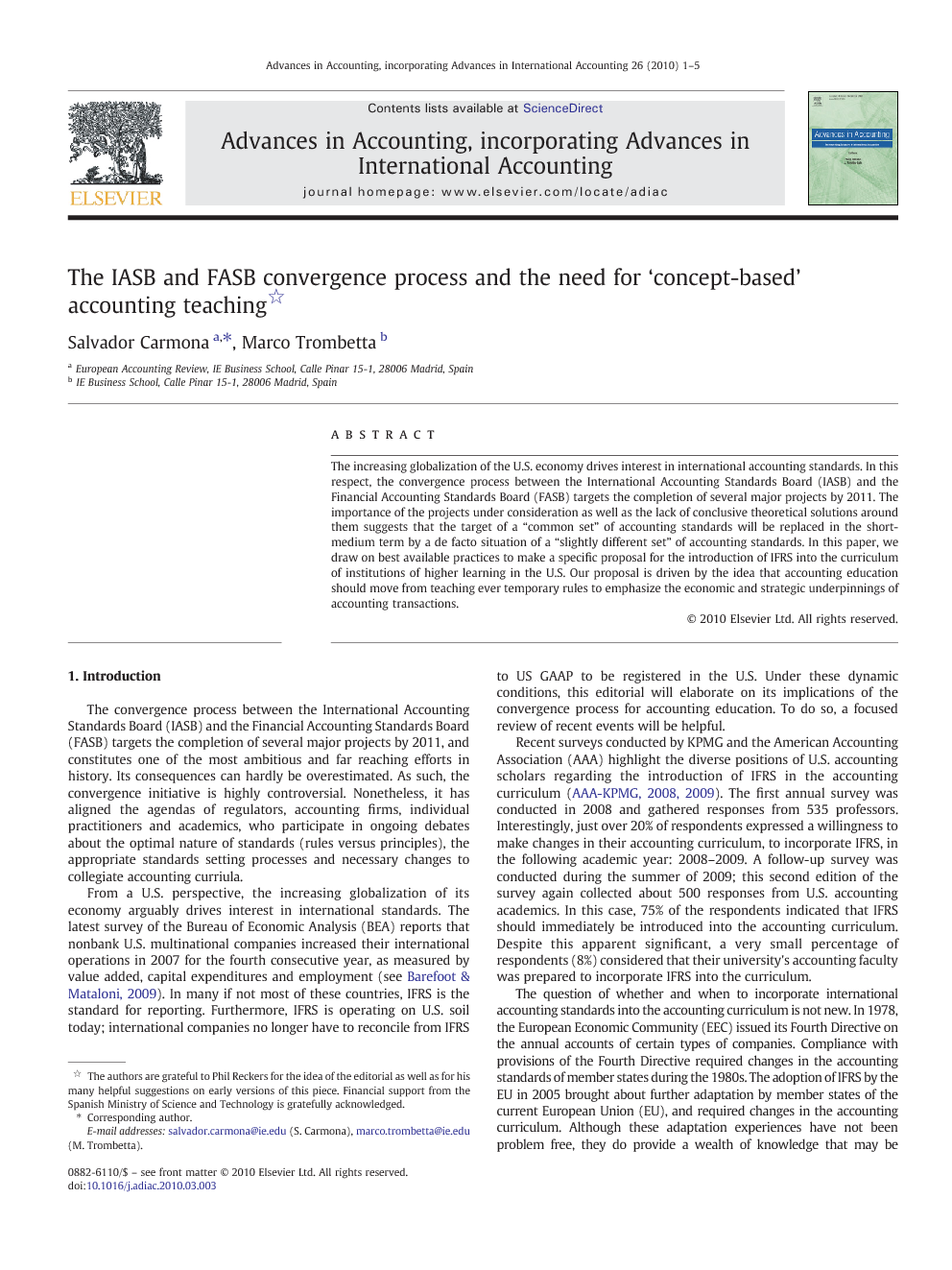 The increasing globalization of the U.S. economy drives interest in international accounting standards. In this respect, the convergence process between the International Accounting Standards Board (IASB) and the Financial Accounting Standards Board (FASB) targets the completion of several major projects by 2011. The importance of the projects under consideration as well as the lack of conclusive theoretical solutions around them suggests that the target of a “common set” of accounting standards will be replaced in the short-medium term by a de facto situation of a “slightly different set” of accounting standards. In this paper, we draw on best available practices to make a specific proposal for the introduction of IFRS into the curriculum of institutions of higher learning in the U.S. Our proposal is driven by the idea that accounting education should move from teaching ever temporary rules to emphasize the economic and strategic underpinnings of accounting transactions.

The convergence process between the International Accounting Standards Board (IASB) and the Financial Accounting Standards Board (FASB) targets the completion of several major projects by 2011, and constitutes one of the most ambitious and far reaching efforts in history. Its consequences can hardly be overestimated. As such, the convergence initiative is highly controversial. Nonetheless, it has aligned the agendas of regulators, accounting firms, individual practitioners and academics, who participate in ongoing debates about the optimal nature of standards (rules versus principles), the appropriate standards setting processes and necessary changes to collegiate accounting curriula. From a U.S. perspective, the increasing globalization of its economy arguably drives interest in international standards. The latest survey of the Bureau of Economic Analysis (BEA) reports that nonbank U.S. multinational companies increased their international operations in 2007 for the fourth consecutive year, as measured by value added, capital expenditures and employment (see Barefoot & Mataloni, 2009). In many if not most of these countries, IFRS is the standard for reporting. Furthermore, IFRS is operating on U.S. soil today; international companies no longer have to reconcile from IFRS to US GAAP to be registered in the U.S. Under these dynamic conditions, this editorial will elaborate on its implications of the convergence process for accounting education. To do so, a focused review of recent events will be helpful. Recent surveys conducted by KPMG and the American Accounting Association (AAA) highlight the diverse positions of U.S. accounting scholars regarding the introduction of IFRS in the accounting curriculum (AAA-KPMG, 2008, 2009). The first annual survey was conducted in 2008 and gathered responses from 535 professors. Interestingly, just over 20% of respondents expressed a willingness to make changes in their accounting curriculum, to incorporate IFRS, in the following academic year: 2008–2009. A follow-up survey was conducted during the summer of 2009; this second edition of the survey again collected about 500 responses from U.S. accounting academics. In this case, 75% of the respondents indicated that IFRS should immediately be introduced into the accounting curriculum. Despite this apparent significant, a very small percentage of respondents (8%) considered that their university's accounting faculty was prepared to incorporate IFRS into the curriculum. The question of whether and when to incorporate international accounting standards into the accounting curriculum is not new. In 1978, the European Economic Community (EEC) issued its Fourth Directive on the annual accounts of certain types of companies. Compliance with provisions of the Fourth Directive required changes in the accounting standards of member states during the 1980s. The adoption of IFRS by the EU in 2005 brought about further adaptation by member states of the current European Union (EU), and required changes in the accounting curriculum. Although these adaptation experiences have not been problem free, they do provide a wealth of knowledge that may be transferred to other settings, including the U.S. Drawing on best available practices, we shall make a specific proposal for the introduction of IFRS into the curriculum of institutions of higher learning in the U.S. As shown by the KPMG-AAA surveys, there is a long way to go in order to get consensus around the introduction of IFRS into the accounting curriculum. We are persuaded that there are two major impediments in this regard. At the core of the discussion is the debate on accrual-based financial accounting, which is an ever-present discussion among accounting academics (see Baxter, 1979). This debate, we submit, has a pervasive impact on several of the specific projects of convergence in accounting standards. Importantly for the purposes of this editorial, there also exists a second and highly interrelated debate about the role of accounting standards in accounting education. In the current editorial, we shall draw on the debate on the first item to outline problems that may be obstructing the actual introduction of IFRS into the curriculum of U.S. universities and business schools.

The current trend towards globalization suggests that U.S. firms will steadily proceed with the current process towards internationalization, involving investments abroad and the set up of subsidiaries in other countries. Given that more than 100 countries are already on IAS/IFRS, U.S. accountants will likely have to consolidate financial accounts of subsidiaries that are prepared under accounting standards different from the U.S. GAAP. Consequently, this will require from U.S. accountants an understanding of IAS/IFRS. Arguably, this awareness of IAS/IFRS could be unnecessary should the current convergence process between the IASB and FASB results in the dominance of the latter over the former. However, the importance of the projects under consideration as well as the lack of conclusive theoretical solutions around them suggest that the target of a “common set” of accounting standards will become in the short-medium term a “slightly different set” of accounting standards. In turn, this likely setting has implications on the introduction of IAS/IFRS in the curriculum of U.S. institutions of higher learning. Overall, we cannot expect standardization resolving our dilemmas as accounting educators. As noted by Baxter some thirty years ago: “Standards are a godsend to the feebler type of writer and teacher who finds it easier to recite a creed than to analyze facts and to engage in argument. If an official answer is available to a problem, why should a teacher confuse examination candidates with rival views? Thus learning by rote replaces reason; the good student of today is he who can parrot most rules. On this spare diet, accounting students are not likely to develop the habits of reasoning and skepticism that education should instill” (Baxter, 1979). Consequently, a setting featuring the coexistence of different accounting standards provides good opportunities to enhance our service to business practice and the society at large. Accounting education in these settings should move from teaching ever temporary rules to emphasize the economic and strategic underpinnings of accounting transactions, which will ultimately let participants in accounting programs cope with IAS/IFRS adoption and any other future regulatory environment.