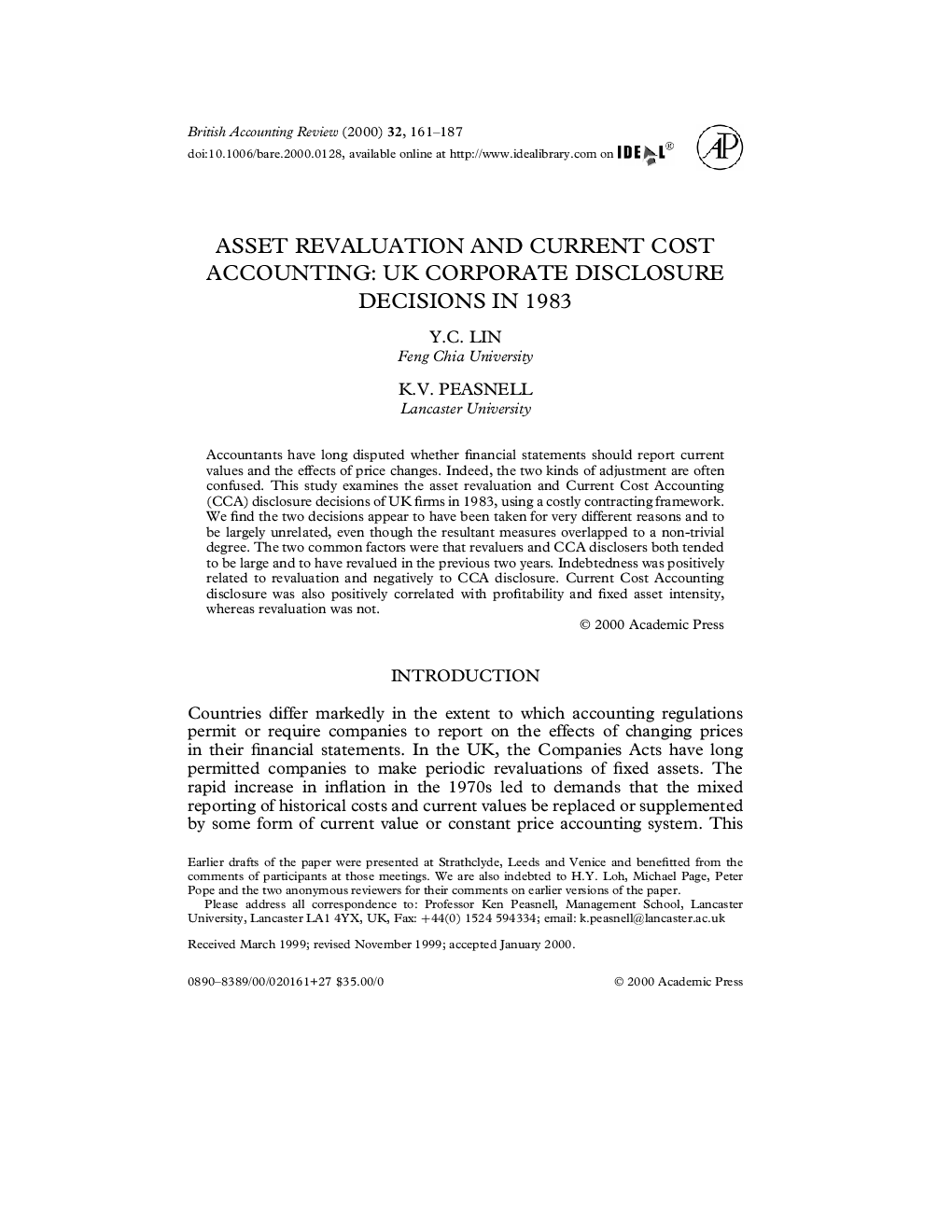 Accountants have long disputed whether financial statements should report current values and the effects of price changes. Indeed, the two kinds of adjustment are often confused. This study examines the asset revaluation and Current Cost Accounting (CCA) disclosure decisions of UK firms in 1983, using a costly contracting framework. We find the two decisions appear to have been taken for very different reasons and to be largely unrelated, even though the resultant measures overlapped to a non-trivial degree. The two common factors were that revaluers and CCA disclosers both tended to be large and to have revalued in the previous two years. Indebtedness was positively related to revaluation and negatively to CCA disclosure. Current Cost Accounting disclosure was also positively correlated with profitability and fixed asset intensity, whereas revaluation was not.

Countries differ markedly in the extent to which accounting regulations permit or require companies to report on the effects of changing prices in their financial statements. In the UK, the Companies Acts have long permitted companies to make periodic revaluations of fixed assets. The rapid increase in inflation in the 1970s led to demands that the mixed reporting of historical costs and current values be replaced or supplemented by some form of current value or constant price accounting system. This debate culminated in the introduction of a Current Cost Accounting (CCA) standard in 1980. The standard was suspended in 1985 and was finally withdrawn in 1988, after which CCA became a purely voluntary matter.In most European countries (the Netherlands being a notable exception)there was little enthusiasm during this period for departures from strict historical cost accounting (HCA), whether in the main statements or as supplementary disclosures. While historical cost continues to serve as the basis of financial reporting in the United States, supplementary disclosures of the effects of price changes were required there too, during the period 1976 to 1986. Given this history, it is perhaps not surprising that the question of choice of valuation basis continues to be a controversial subject amongst accountants in different countries. The situation prevailing in the UK in the early 1980s regarding fixed asset revaluation and the supplementary disclosure of CCA data provides a valuable setting for studying corporate measurement and disclosure policy choices in an area of accounting which has long been regarded as central to the discipline. Surveys have repeatedly shown that a substantial minority of large UK companies revalue at least some of their fixed assets each and every year. Initial compliance with the CCA standard, SSAP 16 (Accounting Standards Committee [ASC], 1980) by large companies was very high,but quickly tailed off. Prior work has focused either on voluntary CCA disclosures (Thornton, 1986; Wong, 1988; Lemke & Page, 1992) or firms’motives for revaluing assets (Whittred & Chan, 1992; Brown, Izan & Loh,1992; Cotter & Zimmer, 1995; Gaeremynck & Veugelers, 1999; Lin &Peasnell, 1999). Our study builds on this earlier work to explore the motives underlying the two types of accounting decision in 1983. We show that revaluation and compliance with SSAP 16 were not simply different means of achieving the same ends: some companies revalued assets but did not comply with SSAP 16, and vice versa. This suggests that different costs and benefits were involved.We found that the revaluation of tangible fixed assets is positively associated with size, prior revaluation and gearing. We also found that compliance with the CCA standard is positively associated with size, the ratio of fixed assets to total assets and return on capital employed, and negatively associated with gearing. In both cases, we attribute the size effect to (a) a desire to avoid political costs and (b) there being economies of scale in financial reporting. Political cost considerations also appear to explain the positive relationship between profitability and CCA compliance. The role of gearing is more complex. The positive relationship between gearing and revaluation appears to be driven by a desire to relax explicit and implicit costs associated with debt financing. In contrast, we attribute the negative relationship between CCA and gearing to political cost considerations: the higher the gearing, the larger is CCA profit and the less different it is to the HCA profit figure. These findings are consistent with the view that the primary purpose of revaluation was to relax borrowing constraints and to avoid political costs and that firms complied with SSAP 16 in order to lower reported income for tax and regulatory purposes.There is no direct evidence of an association between contemporaneous revaluation and SSAP 16 compliance, but breaking the sample of firms down according to the combinations of decisions they made reveals some interesting differences. For the subset of firms that complied with SSAP 16, size was the only variable statistically significantly associated with revaluation. On the other hand, for the firms that did not publish CCA data in 1983, indebtedness and prior revaluation were the factors significantly associated with revaluation. All five of our hypotheses helped to explain the CCA disclosure decision for firms that did not revalue, whereas profitability and prior revaluation were not significant for the revaluer subset.The remainder of the paper is organized as follows. The first section summarizes the key features of the UK asset revaluation and SSAP 16 environment in 1983. The hypotheses are developed in the second section.This is followed by a discussion of the sample selection process and the variables used in the empirical models. The fourth and fifth sections report the statistical results. Conclusions appear in the final section.

This study examined the choices made byUKcompanies in 1983 concerning whether (a) to revalue tangible fixed assets and (b) to comply with SSAP 16. We approached the subject in two ways. The first was to consider revaluation and CCA disclosure separately. We found that asset revaluation was positively associated with size, gearing and whether or not the firm had revalued in the previous two years. We attribute the first two results to political costs and debt contracting factors. We have ambiguous predictions concerning the relationships between revaluation in 1983 and prior revaluation, but attribute the observed positive relationship to some firms simply having a predisposition to revaluation. Contrary to expectation, we did not find a relationship between revaluation and fixed asset intensity. We found SSAP 16 compliance to be positively associated with size, profitability, fixed asset intensity and prior revaluation and negatively associated with gearing. We attribute these results to political costs, materiality of CCA adjustments, preparation cost savings, and the abatement role of gearing in the computation of SSAP 16 profit.Our second approach was to explore the connection between revaluation and compliance decisions. We found no direct evidence of the two decisions being simply different sides of the same coin. But there was some evidence of indirect associations. For example, size is significantly correlated with revaluation only if the firm is also complying with the CCA standard; and the predicted relationships concerning SSAP 16 compliance are strongest for non-revaluers. This is consistent with the view that such firms were generally unenthusiastic about current value accounting and resorted to it only when it was in their interest to do so.The study complements earlier work in two ways. First, it adds to a growing body of work that uses a contracting framework to try to explain firms’ current value disclosure decisions. Secondly, attention is focused on a setting where it is possible, to some degree, to weigh and balance the various factors that play a part in corporate decisions to publish current value information. Hopefully, this helps to integrate understanding of the roles played by these two different (but related) types of current value disclosure in accounting.