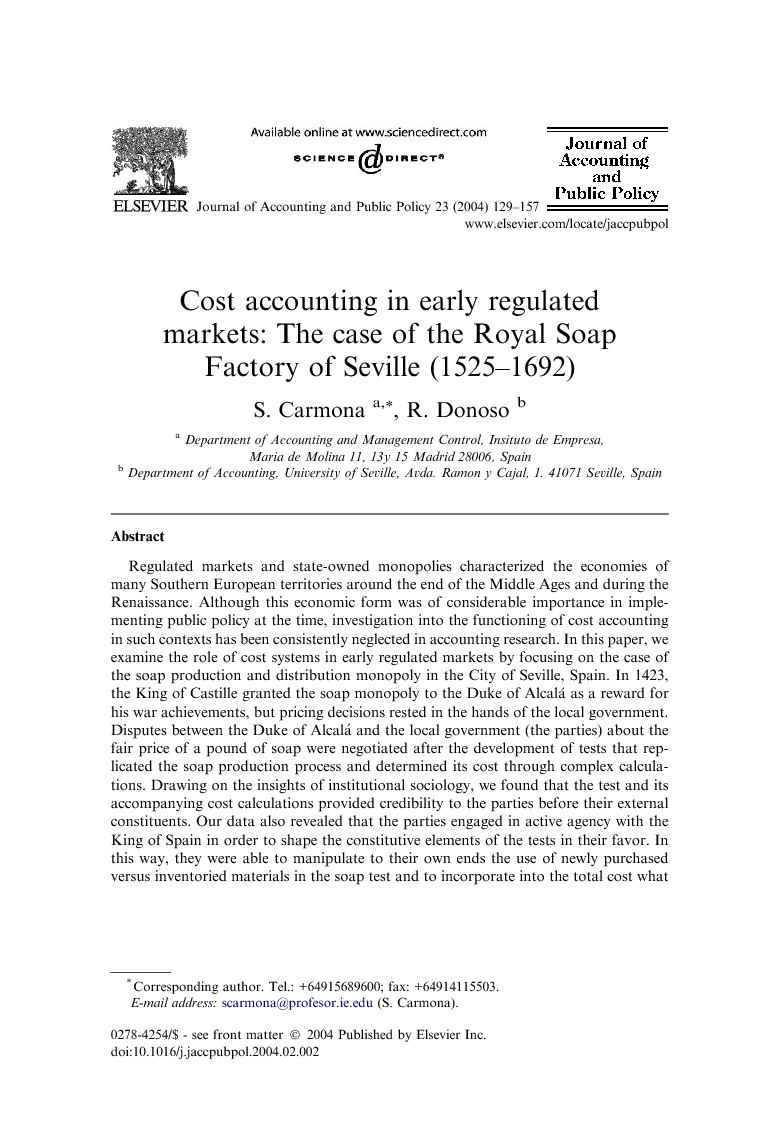 Regulated markets and state-owned monopolies characterized the economies of many Southern European territories around the end of the Middle Ages and during the Renaissance. Although this economic form was of considerable importance in implementing public policy at the time, investigation into the functioning of cost accounting in such contexts has been consistently neglected in accounting research. In this paper, we examine the role of cost systems in early regulated markets by focusing on the case of the soap production and distribution monopoly in the City of Seville, Spain. In 1423, the King of Castille granted the soap monopoly to the Duke of Alcalá as a reward for his war achievements, but pricing decisions rested in the hands of the local government. Disputes between the Duke of Alcalá and the local government (the parties) about the fair price of a pound of soap were negotiated after the development of tests that replicated the soap production process and determined its cost through complex calculations. Drawing on the insights of institutional sociology, we found that the test and its accompanying cost calculations provided credibility to the parties before their external constituents. Our data also revealed that the parties engaged in active agency with the King of Spain in order to shape the constitutive elements of the tests in their favor. In this way, they were able to manipulate to their own ends the use of newly purchased versus inventoried materials in the soap test and to incorporate into the total cost what present-day terminology would call the opportunity cost of the buildings, investments in inventory and machinery, and various employee expenses not previously considered.

Research on 18th and 19th century organizations has enhanced extant knowledge about the role of early cost systems in the public sector and of firms operating under monopolistic conditions (Hoskin and Macve, 1986 and Hoskin and Macve, 1988; Carmona et al., 2002). However, the limited intersection between the time span and the focal settings of these investigations has restricted the diversity of issues under investigation and constrained research advancements in this area (Meyer, 1986). Paraphrasing Scott (1995, p. 146), it would be difficult, if not impossible, to discern the causes and consequences of the implementation of early cost accounting systems if all our cases were embedded in the same or similar contexts. Therefore, different strands of historical research in management accounting concur that we still have much to learn about the extent to which early cost systems met the demands of organizational objectives in varying circumstances (the Economics-Based School: Boyns and Edwards, 1997b; the Foucaldian School: Hoskin and Macve, 2000). In particular, we argue that an examination of the ways in which cost calculations mediated the enforcement of monopolies and regulated markets in many Southern European territories during the Middle Ages and the Renaissance could augment our understanding of the role of such systems in mature, 19th and 20th century public sector organizations (Covaleski and Dirsmith, 1995; Carmona and Macı́as, 2001) and the interrelationship between accounting and the state during the Renaissance (Miller, 1990). Archival evidence supporting this investigation is gathered from the Royal Soap Factory of Seville (Reales Almonas de Sevilla––RAS),1 which from 1423 to 18112 enjoyed the royal privilege of being the sole producer and purveyor of soap to the City of Seville, Spain. The royal decree that granted this monopoly also established that the price of soap should be set by the local government of Seville. In these circumstances, the RAS and the local government (hereafter called “the parties”) became enmeshed in disagreements about the fair price of soap. These disputes were negotiated around ad hoc tests that replicated the production process of soap and aimed at tracking its manufacturing and administrative costs through complex calculations. Our investigation draws on primary evidence about the tests that were conducted in the 16th and 17th centuries and on extensive correspondence among the RAS, the local government of Seville, and the Royal House. This paper may be of interest to readers for at least two reasons: (1) its treatment of a neglected issue in the history of accounting and (2) its institutional sociological perspective, which places cost accounting at the interface of business organizations and the state. First, we approach the environmental circumstances that witnessed the functioning of cost accounting in a setting (i.e., early regulated markets in Southern Europe) and a time (i.e., the 16–17th centuries) that has been consistently neglected by accounting historians. By doing so, we expect to enhance understanding about the technical and discursive natures of cost calculations and their role in enforcing public policy at the outset of regulated markets. In particular, we aim at elucidating the role of cost accounting in a monopoly that was originally granted, not to signal recognition for efficient management, but to express royal gratitude for war achievements. Second, we draw on the contributions of institutional sociology to render visible the functioning of cost accounting in the interface of business organizations and the state, an area that is considered to be promising within this stream of research (Meyer, 1986, p. 355). In the case of the monopoly on the production and distribution of soap, cost calculations became one of the bases for negotiating the price of this public good and a platform for the parties' active attempts at manipulating the price of soap in their favor. Through this investigation we focus explicit attention to a neglected area in institutional theory: the role of human and organizational agency in the establishment and development of societal norms (DiMaggio, 1988; Dacin et al., 2002). As noted by Carruthers (1995, p. 324), organizations frequently play an active role in the construction of norms and beliefs or in the shaping of their application in particular instances. In this study, we focus on the contrast between behavior and intention: the behavior of the parties, which apparently accepted the test as a basis for resolving their disputes on the price of soap; and their intention of shaping, for their own benefit, the particulars of the tests and their concomitant cost calculations. The remainder of this paper is organized as follows. The next section addresses concepts in the new institutional sociology that are useful in explaining our findings. We then examine the wider political and social contexts that witnessed the events under investigation and present the historical background of the soap business in the City of Seville. The next two sections describe the specifics of the tests, particularly by focusing on cost calculations and their role in price setting. Two of the tests that were carried out during our observation period (1525–1692) are examined in detail. We first address the 1525 test, which depicts a case of materials that were newly purchased specifically for the test; and continue with a description of the tests conducted in 1615 that illustrate a case in which the parties used newly purchased materials as well as those taken from the RAS warehouse inventory. In the following section, we examine the role of tests and cost calculations in price setting during the period 1640–1692. Findings are discussed in the final section, which establishes the limitations of this study and suggests further research in the area.