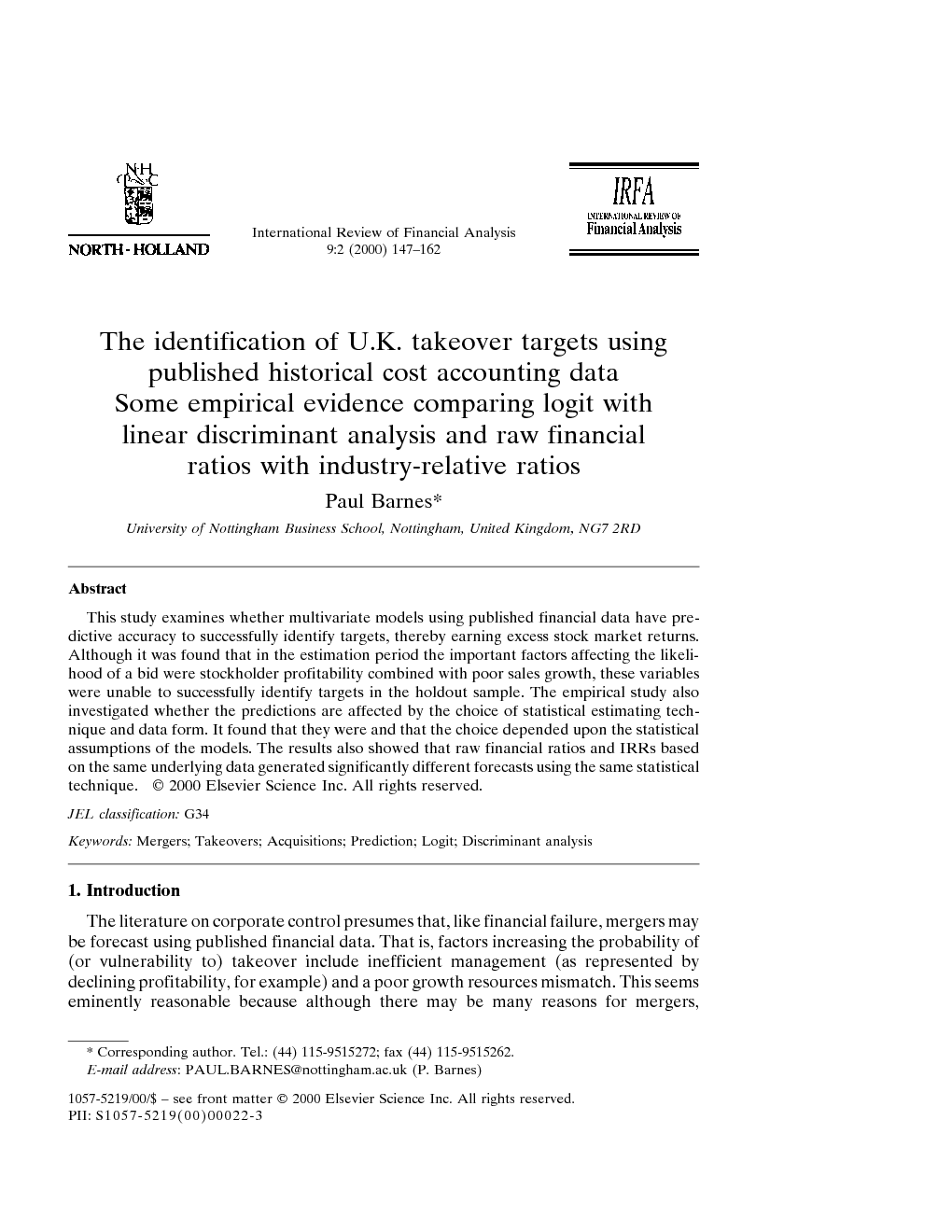 This study examines whether multivariate models using published financial data have predictive accuracy to successfully identify targets, thereby earning excess stock market returns. Although it was found that in the estimation period the important factors affecting the likelihood of a bid were stockholder profitability combined with poor sales growth, these variables were unable to successfully identify targets in the holdout sample. The empirical study also investigated whether the predictions are affected by the choice of statistical estimating technique and data form. It found that they were and that the choice depended upon the statistical assumptions of the models. The results also showed that raw financial ratios and IRRs based on the same underlying data generated significantly different forecasts using the same statistical technique.

This study has attempted to investigate whether multivariate models using published financial data have predictive ability to out-perform the market. It also examined whether the selection of statistical technique (logit or lda) significantly affected the outcome. It was shown that this choice depends on how well the assumptions of the estimation model fit the statistical nature of the underlying data. As the assumptions of lda and logit are different, they will perform differently with the same raw data. Here, two versions of the same data were examined: a general model based on IRRs and a set of industry-specific models estimated from raw financial ratios. The empirical study showed that the distributions of the general and specific model forecasts were roughly similar. Although they generally out-performed chance (especially when predicting non-targets), neither technique had any significant success in predicting targets. They were, therefore, unable to earn excess returns. However, the differences between the distributions of forecasts using the general model and the specific model were much greater. This suggests that the choice of data form (IRRs or raw accounting ratios) may be more important than the choice of statistical technique. The latter result is important because it supports the main hypotheses developed in this article concerning the way the models should perform according to their statistical assumptions and the way in which these are violated. That is, hypotheses 2–5 (points b and c) are supported together with the alternatives to hypotheses 1 and 6 (point d). These are that logit should be preferred to lda if the data are not multivariate normal. If they are multivariate normal, lda may be preferred on purely theoretical grounds, but this may produce misleading and uninterpretable results, whereas logit would not be ambiguous. Finally, if the data do conform to the statistical assumptions, the choice of data form should simply be based on the size of the sample population. This finding has an important bearing on the results relating to the factors affecting the likelihood of (or vulnerability to) merger. Logit and lda identified contradictory variables. Because it has now been shown how logit is preferred and lda is unreliable, we may accept the findings of the former: for the estimation period at least, it was a target's profitability relative to sales and to shareholders' equity, together with a poor growth rate (as opposed to say financial factors such as leverage), that raised the likelihood of a bid. The overall conclusions are, therefore, as follows. First, excess returns may not be made in the U.K. using published historical cost accounting data regardless of the choice of estimating technique. Second, the decision to use logit or lda should be based on the statistical nature of the data to be used. If not, as was demonstrated, misinformation may result. The empirical study clearly demonstrated this in two respects. That raw financial ratios and IRRs based on the same underlying data generated significantly different forecasts using the same statistical technique. Finally, it is profitability combined with poor growth that increases a firm's likelihood of a bid.Eisenbeis 1977, McFadden 1974 and McFadden 1976