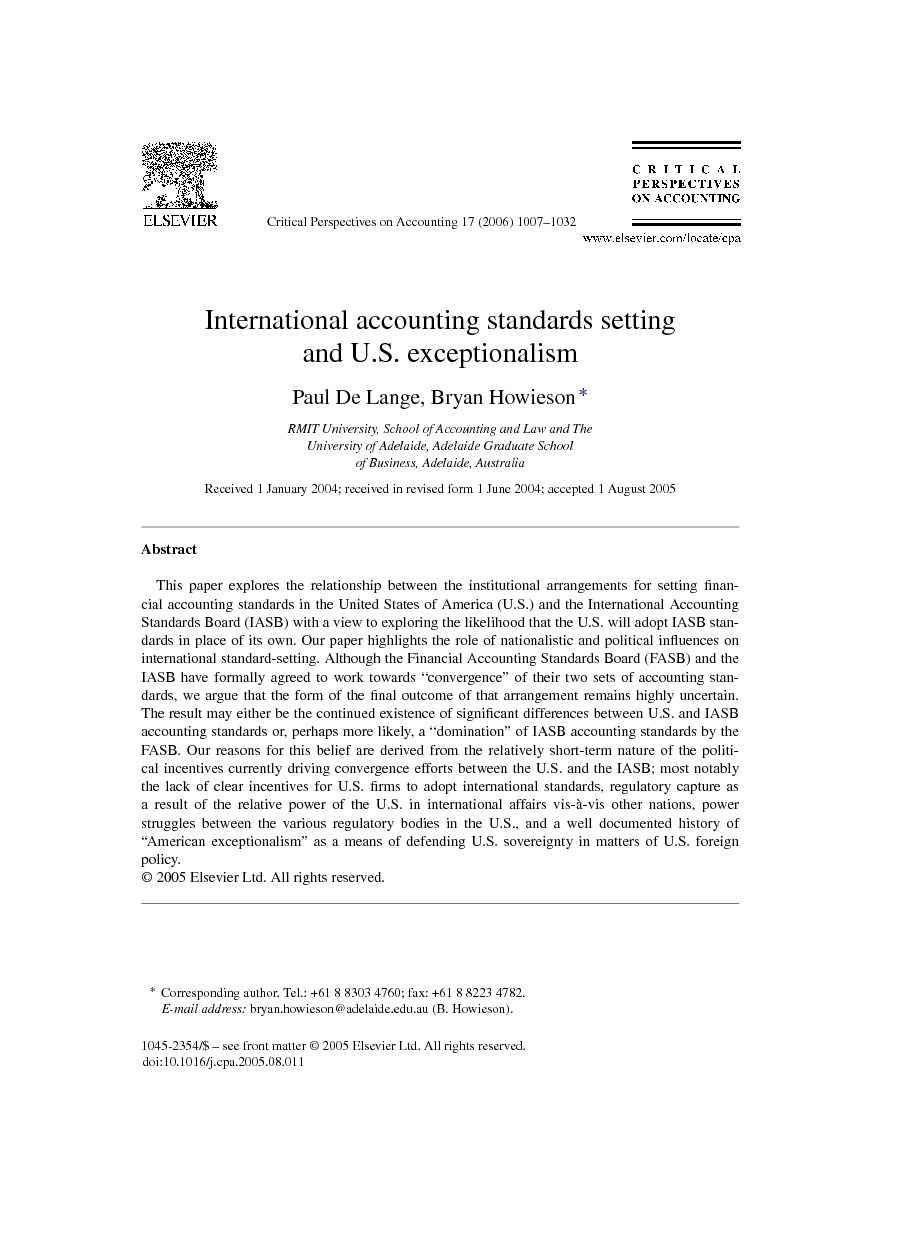 This paper explores the relationship between the institutional arrangements for setting financial accounting standards in the United States of America (U.S.) and the International Accounting Standards Board (IASB) with a view to exploring the likelihood that the U.S. will adopt IASB standards in place of its own. Our paper highlights the role of nationalistic and political influences on international standard-setting. Although the Financial Accounting Standards Board (FASB) and the IASB have formally agreed to work towards “convergence” of their two sets of accounting standards, we argue that the form of the final outcome of that arrangement remains highly uncertain. The result may either be the continued existence of significant differences between U.S. and IASB accounting standards or, perhaps more likely, a “domination” of IASB accounting standards by the FASB. Our reasons for this belief are derived from the relatively short-term nature of the political incentives currently driving convergence efforts between the U.S. and the IASB; most notably the lack of clear incentives for U.S. firms to adopt international standards, regulatory capture as a result of the relative power of the U.S. in international affairs vis-à-vis other nations, power struggles between the various regulatory bodies in the U.S., and a well documented history of “American exceptionalism” as a means of defending U.S. sovereignty in matters of U.S. foreign policy.

Recent years have witnessed a significant growth in the importance and acceptance of the international financial reporting standards1 (IFRS) promulgated by the International Accounting Standards Board (IASB) based in London. Many developing countries have, or are, adopting IFRS (or modified versions) while the European Union (E.U.) and Australia, for example, have adopted IFRS in place of national accounting standards as from 1 January 2005. Despite these developments, it has long been widely recognised that achieving one set of globally accepted accounting standards depends on the position of capital markets and regulators in the United States of America (U.S.). Although convergence of U.S. GAAP and IFRS is not a new idea, current efforts have been spurred on, in part, by a string of high profile corporate collapses and both the Financial Accounting Standards Board (FASB) and the Securities and Exchange Commission (SEC) have sent positive signals as to their willingness to work on the “convergence” of U.S. and international accounting standards (see, for example, FASB (2002, pp. 885–886), FASB, 2004a, FASB, 2004b and FASB, 2004c, Herz, 2002 and Herz, 2003, Campos (2003), and Reason (2002)). This paper seeks to explore nationalistic and political factors that might most strongly influence the working relationship between the IASB and the FASB and what the implications might be for the content of international accounting standards and national standard-setters. We argue that the medium- to long-term outcomes of this “convergence” may result in either the continuance of two sets of significantly different standards or, perhaps more likely, the domination of IFRS by the U.S., primarily via the FASB which in turn will be influenced by the Securities and Exchange Commission (SEC), and ultimately the U.S. government. In brief, reasons for this conclusion are derived from the relatively short-term nature of the political incentives currently driving U.S. regulators towards convergence, the lack of clear incentives for U.S. firms to adopt IFRS, the relative power of the U.S. in international affairs vis-à-vis other nations, regulatory capture in the U.S., the complexity of the political context within which the IASB operates, and a well documented history of the application of the principle of “American exceptionalism” as a means of defending U.S. sovereignty in matters of foreign policy. The remainder of this paper is organized as follows. The next section describes a model for why there may be a demand for international co-operative regimes such as the IASB with the aim of identifying broad factors that encourage or inhibit the success of such an institution. There is then a review of the current U.S. position on “convergence” and an exploration of some of the reasons for this policy. This is followed by an examination of whether U.S. firms face sufficient incentives to support the adoption of IFRS. The importance of the U.S. capital market along with its regulatory and institutional framework is then discussed and the implications are explored as to the possibility of power and domain conflicts between U.S. regulators. A similar exploration is made of the political environment facing the IASB. Finally, consideration is given to whether the concept of “American exceptionalism” might be informative in predicting the willingness of the U.S. to accept accounting rules imposed by a “foreign” regulator.

As interested observers we will see pressures from those willing the speed of convergence “full steam ahead”. The creation of the IASB in 2000 along with Sir David Tweedie at the helm provided new legitimisation and intellectual horsepower to move the process of convergence along (Davies, 2003). Such milestones like the decision by the E.U. and other countries to adoption IFRS by 2005 along with Japan's open dialog on convergence have already demonstrated the complex political environment associated with achieving a global set of accounting standards. Recent “crises” in capital markets and corporate governance have created an environment ripe for those who seek to challenge the accepted norms and conventions in the accounting standard-setting process in the U.S. Specifically, this paper has examined the role of the “captains” and “navigators” of U.S. and IASB convergence. It has reinforced, in the context of convergence, the findings of a substantial prior literature that suggests political processes and power plays by those in positions of influence combined with a strong national identity and ideology will determine U.S. GAAP in the future. The question as to if and when the world will become united in the adoption of IFRS remains a debatable issue and should not be taken as a fait accompli.