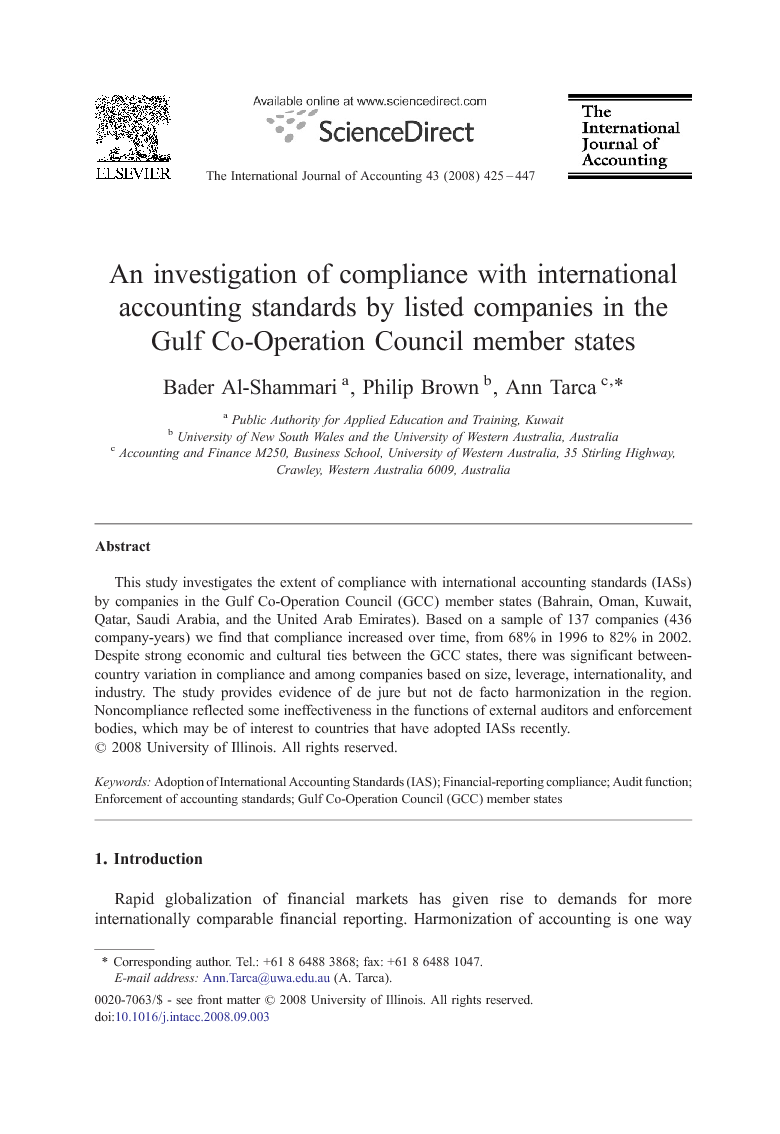 This study investigates the extent of compliance with international accounting standards (IASs) by companies in the Gulf Co-Operation Council (GCC) member states (Bahrain, Oman, Kuwait, Qatar, Saudi Arabia, and the United Arab Emirates). Based on a sample of 137 companies (436 company-years) we find that compliance increased over time, from 68% in 1996 to 82% in 2002. Despite strong economic and cultural ties between the GCC states, there was significant between-country variation in compliance and among companies based on size, leverage, internationality, and industry. The study provides evidence of de jure but not de facto harmonization in the region. Noncompliance reflected some ineffectiveness in the functions of external auditors and enforcement bodies, which may be of interest to countries that have adopted IASs recently.

Rapid globalization of financial markets has given rise to demands for more internationally comparable financial reporting. Harmonization of accounting is one way to promote more transparent and consistent reporting and to that end the International Accounting Standards Board (IASB) produces international accounting standards for use by private sector entities throughout the world. Since 2005 there has been widespread adoption of IASB standards on a mandatory basis. Consequently, there is increased interest in the comparability of reporting being achieved as well as the role of auditors and enforcement bodies in promoting compliance (Securities and Exchange Commission (SEC), 2000, Committee of European Securities Regulators (CESR), 2003 and Schipper, 2005). The aim of this paper is to investigate the level of compliance over time with international accounting standards (IASs) in the six Gulf Cooperation Council (GCC) states, namely Bahrain, Oman, Kuwait, Saudi Arabia, Qatar, and the United Arab Emirates (UAE) and the factors associated with compliance. The GCC countries made IASs mandatory progressively since 1986 for some or all listed companies. This setting allows us to explore the use of IASs in a number of economically important developing countries, which were early adopters of IASs. Mandatory use in the GCC countries provides an opportunity to examine the role of external auditors and enforcement bodies in promoting compliance with IASs. Using a self-constructed compliance checklist, we measure the extent of 137 listed companies' compliance with 14 relevant IASs over the period 1996–2002 (436 company-years).1 For the GCC as a whole, the average level of compliance for all years was 0.75; for disclosure it was 0.69 and for measurement 0.81. The level of compliance increased over time in each state, with overall measures increasing from 0.68 in 1996 to 0.82 in 2002, indicating that compliance has been improving in the region. Despite strong links between member states, compliance varies among them. Since diversity could reflect differences in each country's regulatory framework, we provide a self-constructed enforcement score (encompassing legal requirements, quality of the audit function, and activities of enforcement bodies) for each country. The highest average compliance level for all years is in the UAE (0.80), followed by Saudi Arabia (0.78), Kuwait (0.75), Oman (0.74), Bahrain (0.73) and Qatar (0.70). Differences in compliance levels are generally consistent with national enforcement scores. Compliance also varies by industry, being lower among financial-sector firms. It is higher for larger companies and those with higher leverage and a greater international presence. Compliance with IASs has been measured in several settings in prior research. For example, disclosure compliance is reported in Australia (0.94; Tower, Hancock, & Taplan, 1999), Germany (0.81; Glaum & Street, 2003) and Switzerland (0.74; Street & Gray, 2001). Measurement compliance is reported for Germany (0.86) and Switzerland (0.92; Street & Gray, 2001). Our study adds to this literature in two significant ways. First, it considers countries from a developing region which has considerable economic and political importance but has been the subject of relatively little research. Prior studies, such as Abdelrahim, Hewaidy, and Mostafa (1997), Abdelrahim and Mostafa (2000) and Joshi and Al-Mudhahki (2001), have not examined compliance in depth, across countries and over time. Our study achieves this and provides empirical evidence about the progress of harmonization in the region. The results are, therefore, of interest to academics and practitioners following the development of more comparable financial reporting on a global scale. Second, the GCC setting has several features which are useful in a study of compliance. Some countries in the region have been early mandatory adopters of IASs, which means their companies have considerable experience with use of IASs in a mandatory rather than voluntary environment. In the GCC setting we can investigate the relationship of national regulatory frameworks and mandatory compliance over time. In other countries companies have adopted IASs more recently (for example, in the European Union) or their use has been voluntary (as in Switzerland and Germany in the early 1990s). Most previous IAS-compliance studies have been in settings where use of IASs is voluntary or not subject to national enforcement (Nobes, 1990, Street et al., 1999, Tower et al., 1999, Street and Bryant, 2000, Street and Gray, 2001 and Glaum and Street, 2003). Our study adds to the literature by considering compliance in a mandatory setting. Further, it provides useful insights about the relationship of IASs adoption, compliance levels, and the effectiveness of independent auditors and enforcement bodies. Following widespread adoption of IASs, attention has now focused on the extent to which companies comply with IASs in a mandatory setting (Schipper, 2005 and Brown and Tarca, 2005). Our study is one of the first to provide empirical evidence about this issue. Although we consider only one region and six countries, our results highlight issues which may be equally relevant in other countries where IASs have been adopted more recently. The remainder of the paper is organized as follows. The next section presents the institutional framework for financial reporting in the GCC member states, reviews relevant literature and outlines the research question. The third section describes sample selection, data collection and statistical method. Results, robustness checks, and limitations are reported in the fourth section. The final section concludes the study.

We show that the level of mandatory compliance with IASs differed among companies from the Gulf Co-Operation Council (GCC) member states (Bahrain, Oman, Kuwait, Qatar, Saudi Arabia and the United Arab Emirates) over the period 1996–2002. Although these countries had progressively made IASs mandatory for all or selected companies since 1996, and compliance improved over the period, no company achieved full compliance with either IASs measurement or disclosure requirements during the period. Our study provides the first in-depth analysis of IASs compliance within a set of states with common interests in a politically and economically important region, and thus extends the literature about progress towards the international harmonization of financial reporting. The results suggest that there is scope for companies to improve their levels of compliance with IASs, to improve comparability among companies in the region and to facilitate the process of attracting international investors. The IASB standards have been developed for use as national standards in countries throughout the world, irrespective of culture and level of economic development. Since wide-scale mandatory adoption is relatively recent, little is known about the effectiveness of IASs adoption in various countries. Exploring compliance in the GCC region is of interest because of distinctive features such as strong links between member states, developing-country status accompanied by considerable wealth, and significant cultural differences to many western countries. We show that adoption of IASs in the region is de jure but not de facto, that is, IASs are adopted by law but not in practice, as substantial noncompliance is observed. We also explore the relationship of compliance and each country's institutional setting, thus extending prior studies by exploring relevant elements of the national institutional frameworks, including the activities of auditors and enforcement bodies. We find that despite noncompliance and the responsibilities of auditors under the law (which are similar to those observed in western countries), no action has been taken against an audit firm, member of the board of directors, or a manager for violating an accounting regulation, except for two cases in Oman and one in Kuwait. External auditors in the GCC member states reported a client company fully complied with all IASs even where that was clearly not the case. Our results suggest that although a set of mechanisms to promote compliance among GCC companies is in place, activities of enforcement bodies have been insufficient to ensure compliance. Possible reasons are a lack of professional training and payment of salaries to attract sufficiently qualified staff. Also, the enforcement bodies have other responsibilities and there may be a lack of commitment from governments, at a policy level, to enforcement. In the face of scarce resources, efforts might be more effective if focused on monitoring companies that are smaller, have fewer international investors, and borrow proportionately less. Thus, the findings may be relevant to national regulators and the Gulf Co-Operation Council Accounting and Auditing Organization (GCCAAO) in their efforts to harmonize financial reporting. The evidence presented about practical outcomes of IASs adoption may be relevant in other countries which have recently made IASs mandatory. The financial reporting frameworks in the GCC countries are based on company-law requirements which are enforced through government departments and contain penalties for breach of requirements. The frameworks place extensive reliance on external auditors and feature only limited activity by stock exchanges and enforcement bodies in checking for compliance and taking action for non-compliance. As such, the frameworks have many similarities to those which have been operating in other countries (see for example, FEE's (2001) comparison of financial reporting frameworks in European countries). This study provides evidence of a lack of compliance in practice, despite the existence of many of the mechanisms considered necessary to promote compliance. Thus, the results may be insightful for regulators in other IASs adopting counties.