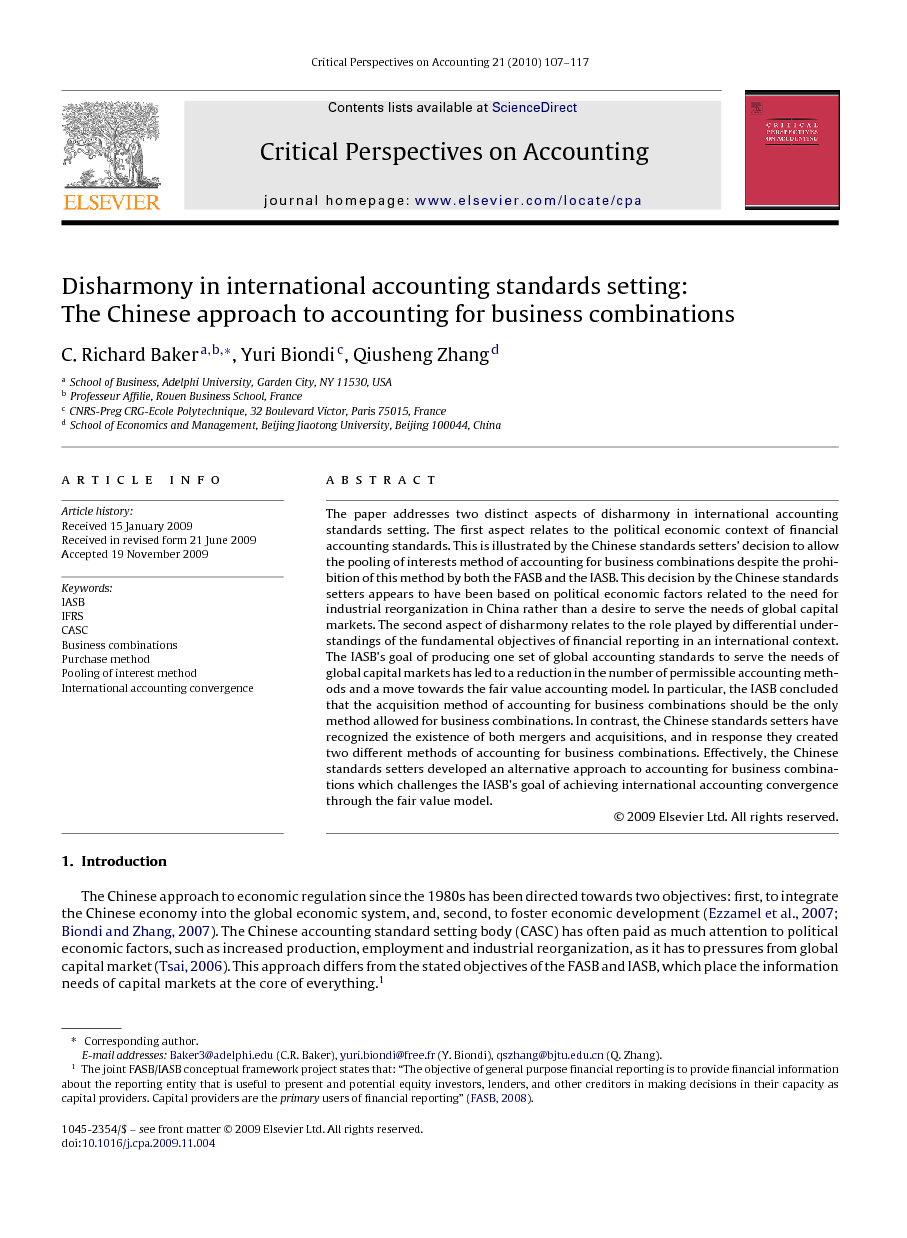 The Chinese approach to economic regulation since the 1980s has been directed towards two objectives: first, to integrate the Chinese economy into the global economic system, and, second, to foster economic development (Ezzamel et al., 2007 and Biondi and Zhang, 2007). The Chinese accounting standard setting body (CASC) has often paid as much attention to political economic factors, such as increased production, employment and industrial reorganization, as it has to pressures from global capital market (Tsai, 2006). This approach differs from the stated objectives of the FASB and IASB, which place the information needs of capital markets at the core of everything.1 The decision taken by the Chinese standards setters to allow the pooling of interests method constitutes an empirical example of the complex interaction between standards setting and its political economic context (Ezzamel et al., 2007). The Chinese decision also reveals the presence of disharmony in international accounting standards setting (De Lange and Howieson, 2006 and Stolowy and Jeny-Cazavan, 2001). In their drive to achieve a single set of global accounting standards, the IASB, allied with the FASB, concluded that virtually all business combinations are acquisitions, and that there should be only one method of accounting for business combinations (i.e. the purchase or acquisition method). In contrast, the Chinese standards setters acknowledged the existence of business combinations that are not acquisitions (i.e. mergers), and they decided that mergers should not be accounted for by the acquisition method, but rather by the pooling of interests method instead. In essence, the capital markets orientation of the FASB and IASB blinded them to the existence of mergers, while the political economic context led the Chinese standards setters to recognize that mergers may actually be the most common types of business combination (Jackson and Miyajima, 2007). Despite the proclamations of the IASB to the contrary, there has been considerable resistance to IASB standards from various directions, not only the Chinese (Ding et al., 2005 and Stolowy and Jeny-Cazavan, 2001). For example, the French accounting standards setters rejected the non-amortization of acquisition goodwill in two decisions (Nos. 2005-9 and 2005-10).2 The Japanese accounting standards setters manifested their dissent to IFRS 3 (Business Combinations) in several comment letters issued in 2001, 2003, and 2005. In 2006, the Chinese, Japanese and Korean standards setters joined together in an initiative which permits the continued use of pooling under certain circumstances (CASC, 2006). The Japanese standards setters authorized the pooling of interest method to be used in their national standards until December 2008, when they eliminated it “to respond to the assessment of equivalence with the European Union” (ASBJ, 2009, p. 2). In addition, Biondi and Zhang (2007) and Peng and Bewley (2009) have demonstrated that even though China has adopted fair value accounting as mandated by IFRS to some extent, substantial divergences between Chinese standards and IFRS exists in practice. In this paper we argue that the actions of the various national accounting standards setters which allow or require accounting methods that differ from IFRS may be based on political economic factors rather than the needs of capital markets. In particular, the Chinese standards setters’ decision to authorize the pooling of interests method reflects the context of large scale industrial reorganization taking place in China (Xu and Uddin, 2008). The pooling method provides greater flexibility to banks and large industrial groups when reorganizing their operations without the need to refer to unreliable fair market value measures as required by IFRS3 (Pan, 2002, Huang et al., 2004 and Busse von Colbe, 2004). The remainder of this paper is organized as follows. The first section discusses the previous accounting literature dealing with disharmony in international accounting standards setting. The second section discusses the accounting standards setting process in China and provides an empirical case example of a business combination under common control. The third section discusses the Chinese decision from a political economic perspective. The fourth section discusses the pooling of interests method from an accounting theory perspective. The final section summarizes the main arguments of the paper and concludes.