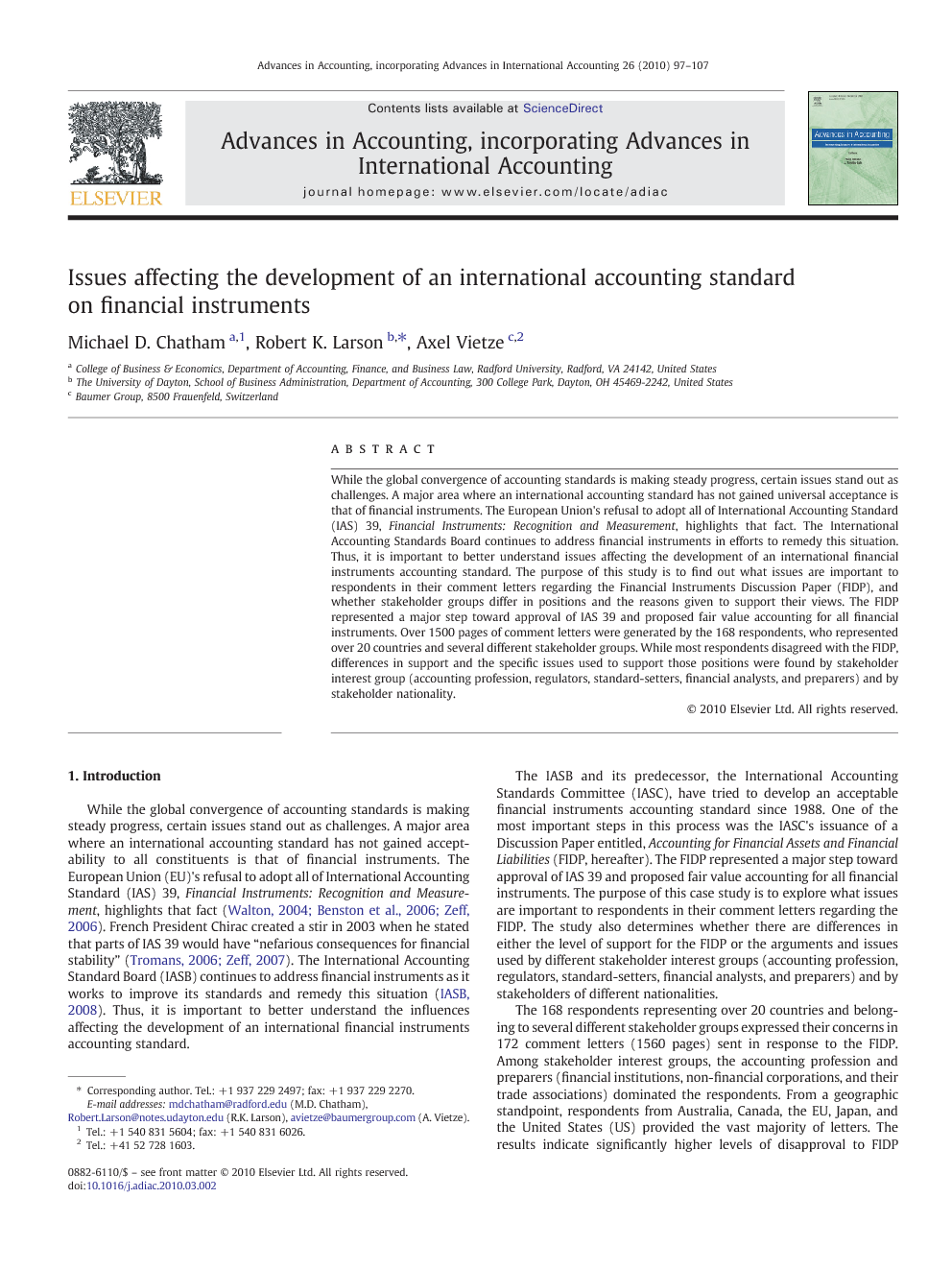 While the global convergence of accounting standards is making steady progress, certain issues stand out as challenges. A major area where an international accounting standard has not gained universal acceptance is that of financial instruments. The European Union's refusal to adopt all of International Accounting Standard (IAS) 39, Financial Instruments: Recognition and Measurement, highlights that fact. The International Accounting Standards Board continues to address financial instruments in efforts to remedy this situation. Thus, it is important to better understand issues affecting the development of an international financial instruments accounting standard. The purpose of this study is to find out what issues are important to respondents in their comment letters regarding the Financial Instruments Discussion Paper (FIDP), and whether stakeholder groups differ in positions and the reasons given to support their views. The FIDP represented a major step toward approval of IAS 39 and proposed fair value accounting for all financial instruments. Over 1500 pages of comment letters were generated by the 168 respondents, who represented over 20 countries and several different stakeholder groups. While most respondents disagreed with the FIDP, differences in support and the specific issues used to support those positions were found by stakeholder interest group (accounting profession, regulators, standard-setters, financial analysts, and preparers) and by stakeholder nationality.

While the global convergence of accounting standards is making steady progress, certain issues stand out as challenges. A major area where an international accounting standard has not gained acceptability to all constituents is that of financial instruments. The European Union (EU)'s refusal to adopt all of International Accounting Standard (IAS) 39, Financial Instruments: Recognition and Measurement, highlights that fact ( Walton, 2004, Benston et al., 2006 and Zeff, 2006). French President Chirac created a stir in 2003 when he stated that parts of IAS 39 would have “nefarious consequences for financial stability” ( Tromans, 2006 and Zeff, 2007). The International Accounting Standard Board (IASB) continues to address financial instruments as it works to improve its standards and remedy this situation (IASB, 2008). Thus, it is important to better understand the influences affecting the development of an international financial instruments accounting standard. The IASB and its predecessor, the International Accounting Standards Committee (IASC), have tried to develop an acceptable financial instruments accounting standard since 1988. One of the most important steps in this process was the IASC's issuance of a Discussion Paper entitled, Accounting for Financial Assets and Financial Liabilities (FIDP, hereafter). The FIDP represented a major step toward approval of IAS 39 and proposed fair value accounting for all financial instruments. The purpose of this case study is to explore what issues are important to respondents in their comment letters regarding the FIDP. The study also determines whether there are differences in either the level of support for the FIDP or the arguments and issues used by different stakeholder interest groups (accounting profession, regulators, standard-setters, financial analysts, and preparers) and by stakeholders of different nationalities. The 168 respondents representing over 20 countries and belonging to several different stakeholder groups expressed their concerns in 172 comment letters (1560 pages) sent in response to the FIDP. Among stakeholder interest groups, the accounting profession and preparers (financial institutions, non-financial corporations, and their trade associations) dominated the respondents. From a geographic standpoint, respondents from Australia, Canada, the EU, Japan, and the United States (US) provided the vast majority of letters. The results indicate significantly higher levels of disapproval to FIDP proposals by preparers and Europeans. Also, stakeholder interest and geographic groups often used different argumentation to support their positions. This topic is relevant for several reasons. Financial instruments continue to be an important and contentious accounting topic. Furthermore, given the push to use fair values more widely in accounting, a fuller understanding of the positions taken by different stakeholders should benefit both international and national accounting standard-setters, as well as those that may either be advocating or opposing the “fair-value movement.” The FIDP is appropriate for this purpose because its “fair valuation” aspects impact different interest group stakeholders (e.g., preparers, users, regulators) to varying extents. It is also important to better understand how different parties may articulate their particular opinions regarding fair values. Given the large number of comment letters sent by different stakeholders in various countries, the FIDP provides a good venue for this analysis of financial instruments and should illuminate both the important issues and the diversity of opinions. The paper demonstrates how different stakeholders support their positions in both a qualitative and a quantitative sense, while also offering additional insight into the international accounting standard-setting process.

The goal of this study is to determine what issues are important to respondents in their comment letters regarding the FIDP, and whether stakeholder groups differ in positions and the reasons given to support their views. Institutional theory indicates that standard-setters have an incentive to respond to the interests of its constituents. The fact that the FIDP was the third attempt to develop a financial instruments standard offers evidence that the IASC reacted to prior lobbying efforts. The flexibility (or lack thereof) was a major point of contention among interested parties — ED 40 was too inflexible, while ED 48 had too many alternatives. Content analysis of the comment letters revealed hearty disapproval of the FIDP and its approach to measure all financial instruments at their fair value. Most respondents disagreed with the FIDP, with only regulators, accounting standard-setters, and financial analysts supporting the FIDP. The accounting profession is more evenly split between supporters and opponents. While the degree of disapproval varies significantly among stakeholder interest groups, if the preparers are excluded from the analysis, the overall views on the FIDP would be quite balanced (this latter point was noted by several IASC representatives contacted by the authors). In most cases, a majority of respondents from a country opposed the FIDP. Only three Scandinavian countries (Denmark, Norway, and Sweden) had a majority of their respondents supporting the FIDP. Overall, preparers and Europeans had significantly higher levels of disapproval for the FIDP. The analysis of the FIDP comment letters added clarity to interested parties' perceived difficulties regarding the implementation of the FIDP proposals and, in general, fair value accounting. The accounting profession more frequently mentions the criteria of mismatches and measurement difficulties when questioning the appropriateness of the proposals, while preparers tend to challenge the understandability, decision usefulness, and prudence of the FIDP. Many respondents consider the proposals to be conceptually sound, but not operable in the short-term due to the difficulties in reliably determining fair values. Despite widespread disapproval of the FIDP among respondents, the IASC forged ahead with an interim standard IAS 39 based upon the fair value prescriptions most FIDP lobbyers found unappealing. IAS 39 may be the result of a process where the IASC ignored most preparers and placed more importance on the desires of certain parties (e.g., IOSCO, and particularly the SEC), since these latter organizations have relatively more impact on the widespread acceptance of international accounting standards. As in all studies, certain limitations are acknowledged. First, content analysis always entails subjectivity, but every attempt was made to maintain consistency both within and between scores and scorers. Another limitation is that it considers only one aspect of the due process. Future research might explore other means available to lobbyists that are less accessible for public scrutiny (e.g. roundtable discussions), but that might be more influential. While the analysis notes that much of the substance of the FIDP became IAS 39 over the objections of certain stakeholder groups, the study does not know the actual influence particular letters had on the actual outcome. Also, a one-period single issue analysis of lobbying behavior ignores the time-series, give-and-take nature of the standard setting process, so the results may not be generalizable to past or future behavior. Future research should explore the relative power of lobbying groups on different issues. Relatively few studies have explored in detail the development of an international accounting standard. This case study provides a better understanding of the issues underlying the positions of those both favoring and opposing the FIDP. This study is important because the IASB continues to deal with the accounting for financial instruments and eventually wants a standard that is acceptable to all constituents, including the EU. It is imperative to realize that beyond general disagreement, different issues are being used by various stakeholders to support their positions. While not significant due to sample size constraints, one of the most revealing findings was that dissimilar arguments are used by respondents from different countries. International accounting standards are gaining greater official acceptance, but the findings indicate that different countries still have diverse views on the underlying assumptions and purposes of accounting, particularly with respect to fair valuation. For example, in April 2008 a German banking association (Bundesverband deutscher Banken) which opposed the FIDP attacked IAS 39 and called on the IASB to review its mark-to-market valuation rules for banks — stating that the current IASB rules intensify existing banking problems (Deloitte, 2008). These differences create problems not only when trying to find an acceptable financial instruments standard, but when endeavoring to converge all accounting standards, their interpretation, their implementation, and their enforcement.