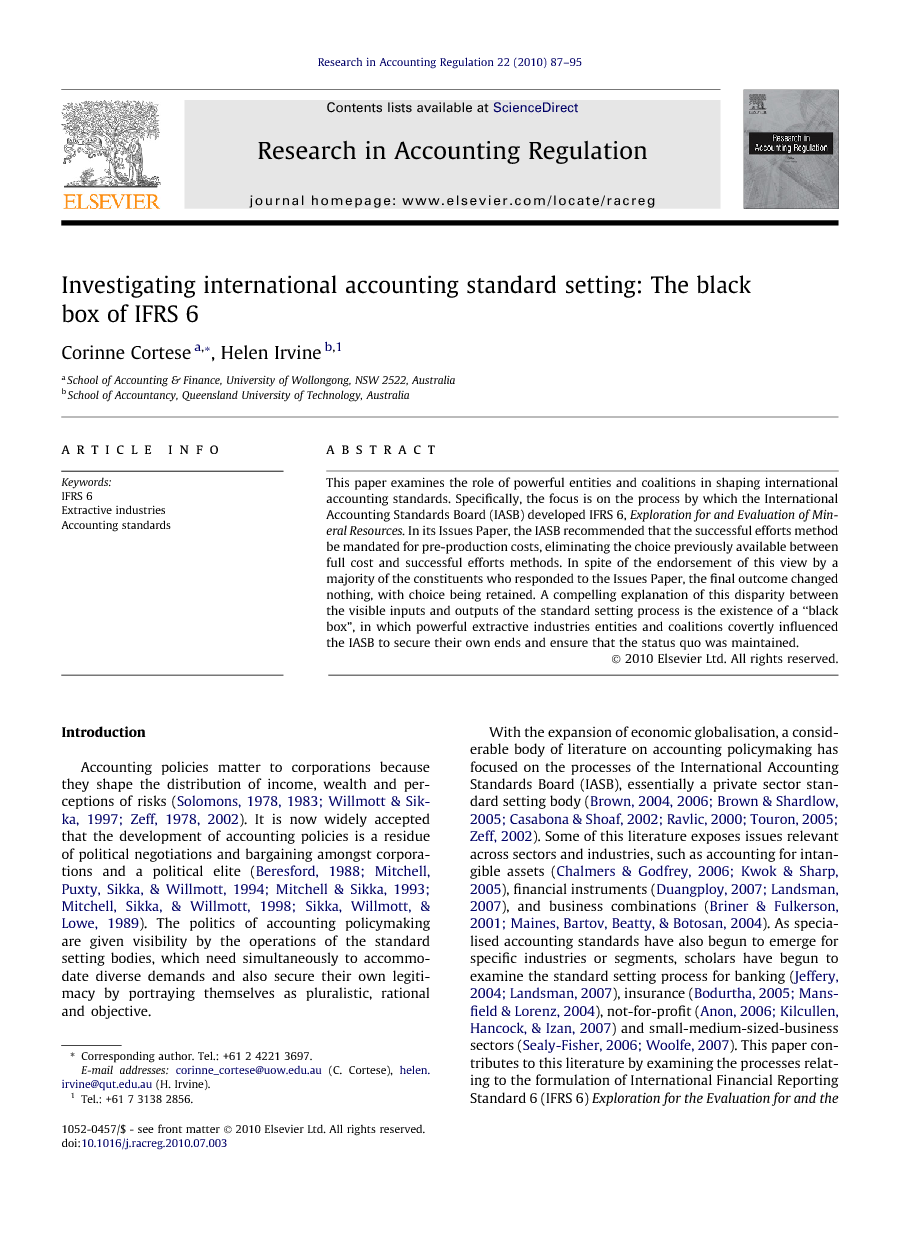 This paper examines the role of powerful entities and coalitions in shaping international accounting standards. Specifically, the focus is on the process by which the International Accounting Standards Board (IASB) developed IFRS 6, Exploration for and Evaluation of Mineral Resources. In its Issues Paper, the IASB recommended that the successful efforts method be mandated for pre-production costs, eliminating the choice previously available between full cost and successful efforts methods. In spite of the endorsement of this view by a majority of the constituents who responded to the Issues Paper, the final outcome changed nothing, with choice being retained. A compelling explanation of this disparity between the visible inputs and outputs of the standard setting process is the existence of a “black box”, in which powerful extractive industries entities and coalitions covertly influenced the IASB to secure their own ends and ensure that the status quo was maintained.

Accounting policies matter to corporations because they shape the distribution of income, wealth and perceptions of risks (Solomons, 1978, Solomons, 1983, Willmott and Sikka, 1997, Zeff, 1978 and Zeff, 2002). It is now widely accepted that the development of accounting policies is a residue of political negotiations and bargaining amongst corporations and a political elite (Beresford, 1988, Mitchell et al., 1994, Mitchell and Sikka, 1993, Mitchell et al., 1998 and Sikka et al., 1989). The politics of accounting policymaking are given visibility by the operations of the standard setting bodies, which need simultaneously to accommodate diverse demands and also secure their own legitimacy by portraying themselves as pluralistic, rational and objective. With the expansion of economic globalisation, a considerable body of literature on accounting policymaking has focused on the processes of the International Accounting Standards Board (IASB), essentially a private sector standard setting body (Brown, 2004, Brown, 2006, Brown and Shardlow, 2005, Casabona and Shoaf, 2002, Ravlic, 2000, Touron, 2005 and Zeff, 2002). Some of this literature exposes issues relevant across sectors and industries, such as accounting for intangible assets (Chalmers and Godfrey, 2006 and Kwok and Sharp, 2005), financial instruments (Duangploy, 2007 and Landsman, 2007), and business combinations (Briner and Fulkerson, 2001 and Maines et al., 2004). As specialised accounting standards have also begun to emerge for specific industries or segments, scholars have begun to examine the standard setting process for banking (Jeffery, 2004 and Landsman, 2007), insurance (Bodurtha, 2005 and Mansfield and Lorenz, 2004), not-for-profit (Anon, 2006 and Kilcullen et al., 2007) and small-medium-sized-business sectors (Sealy-Fisher, 2006 and Woolfe, 2007). This paper contributes to this literature by examining the processes relating to the formulation of International Financial Reporting Standard 6 (IFRS 6) Exploration for the Evaluation for and the Evaluation of Mineral Resources. This standard is of particular significance to the extractive industries, which comprise oil, gas and mining companies. An important issue in extractive industries accounting is the way pre-production activities, also known as exploration and evaluation activities, are accounted for. Historically, there have been two methods employed, the full cost method and the successful efforts method2. Under the full cost method, all acquisition, exploration, and drilling costs, including those relating to unsuccessful activities, may be capitalised and carried forward until such time as they can be written off against revenue from successful projects (Flory & Grossman, 1978). In contrast, under the successful efforts method, only those pre-production costs that relate directly to successful projects can be matched against revenue from the successful project (Katz, 1985). While both approaches are based on the historical cost concept of accounting, the method that produces the most favourable results depends on whether the reporting entity is small and in its early stages of exploration, or larger and more able to absorb the cost of unsuccessful efforts (Katz, 1985 and Van Riper, 1994). The full cost versus successful efforts issue first became controversial in the United States (US) in the late 1960s when the Financial Accounting Standards Board (FASB) sought to narrow accounting alternatives and require oil and gas companies to reporting according to the successful efforts method (Van Riper, 1994). The effect on profits calculated under each method can be substantial; a recent switch in methods from full cost to successful efforts accounting caused one UK oil producer to restate its profits from $44 million to $22 million (Neveling, 2005). The extractive industries is a sector dominated by global corporations and powerful extractive industries bodies whose income in many cases dwarfs the gross domestic product of many nation states (Cortese, Irvine, & Kaidonis, 2009). The purpose of this paper is to examine the role these powerful entities and coalitions play in shaping international accounting standards and recognise that their contributions may not always be visible but their influence certainly exists and permeates the accounting standard setting process. To advance the analysis, this paper is constructed in the following sections. First, the black box concept is proposed as a means for understanding and examining the international accounting standard setting process (Hodges & Mellett, 2008). This is followed by a discussion of standard setting and IFRS 6, which contextualises the IASB3 and its processes, presents an overview of the extractive industries and provides evidence of the enormous economic strength of this sector. The visible inputs, for example, the exposure draft and responses, are examined in light of the visible output of the standard setting process, IFRS 6. Concluding comments reflect on the disconnect between the visible input and visible output and infer the existence of a black box in the standard setting process within which the unseen influences of powerful constituents act as a countervailing force against visible opinion.