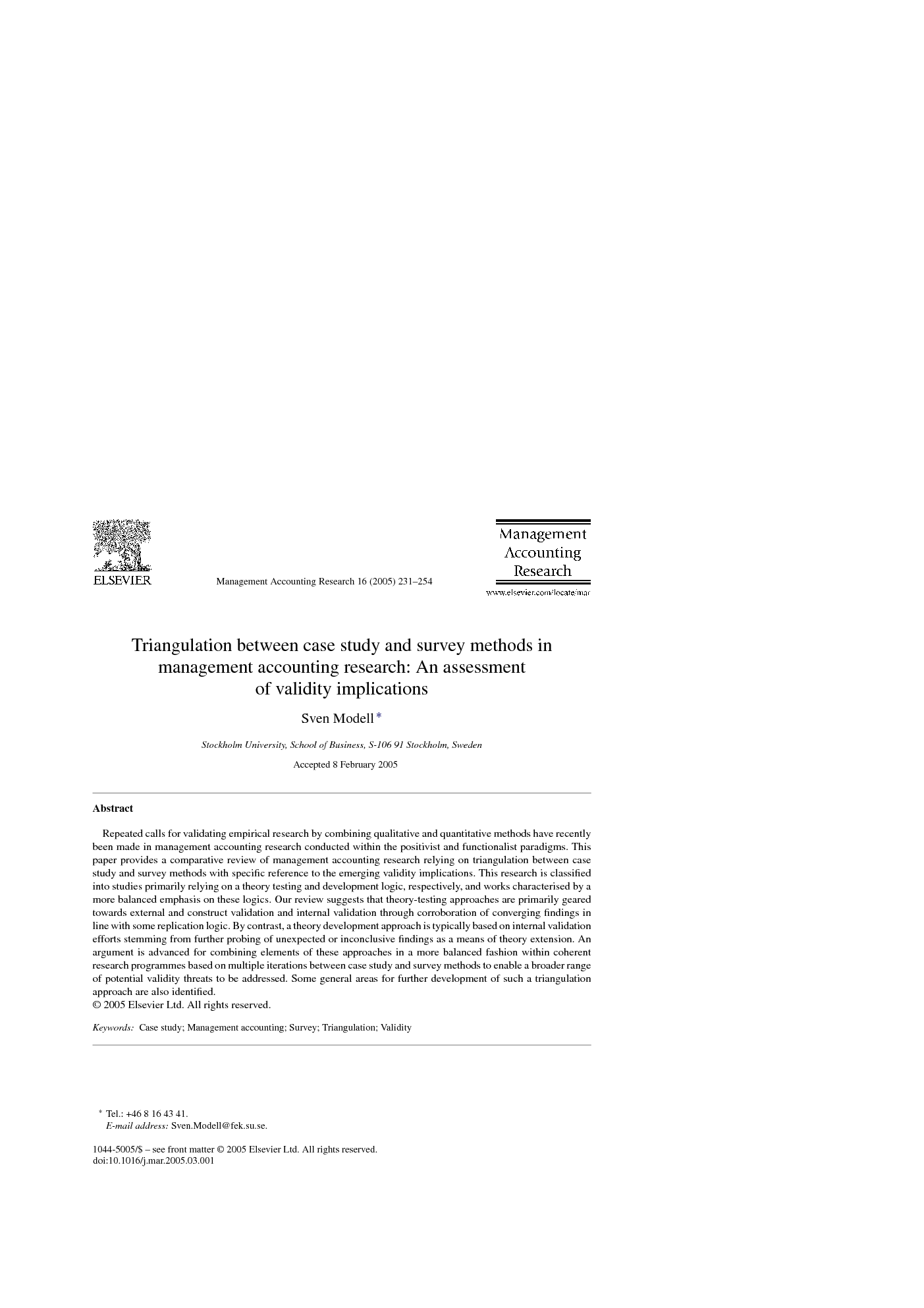 Repeated calls for validating empirical research by combining qualitative and quantitative methods have recently been made in management accounting research conducted within the positivist and functionalist paradigms. This paper provides a comparative review of management accounting research relying on triangulation between case study and survey methods with specific reference to the emerging validity implications. This research is classified into studies primarily relying on a theory testing and development logic, respectively, and works characterised by a more balanced emphasis on these logics. Our review suggests that theory-testing approaches are primarily geared towards external and construct validation and internal validation through corroboration of converging findings in line with some replication logic. By contrast, a theory development approach is typically based on internal validation efforts stemming from further probing of unexpected or inconclusive findings as a means of theory extension. An argument is advanced for combining elements of these approaches in a more balanced fashion within coherent research programmes based on multiple iterations between case study and survey methods to enable a broader range of potential validity threats to be addressed. Some general areas for further development of such a triangulation approach are also identified.

In recent years, management accounting research conducted within the positivist and functionalist paradigms has shown increasing recognition of the need to complement established quantitative methods with a greater or lesser element of qualitative, case study-based research. A number of calls for such a complementary approach, relying on method triangulation, have been made (e.g., Ferreira and Merchant, 1992, Ittner and Larcker, 2001 and Shields, 1997) and a growing number of advances in this direction can be found in empirical management accounting research. The key justification for method triangulation is typically enhancement of the validity of research findings (Brewer and Hunter, 1989, Bryman, 1992, Denzin, 1978 and Jick, 1979). However, a more systematic and in-depth discussion of validity implications associated with method triangulation has largely eluded the evolving methodological debate in the management accounting literature. A few prior attempts to contrast validity aspects associated with laboratory, survey and case study research in management accounting have been made (Abernethy et al., 1999, Birnberg et al., 1990 and Brownell, 1995). A limitation of these relatively broadly based reviews is that they primarily draw on multiple studies, each dominated by one or the other method, whilst little attention has been paid to validity issues arising from different triangulation approaches in single, or closely related studies conducted by the same researcher(s) (cf. Creswell, 1994 and Tashakkori and Teddlie, 1998).1 Further, the rationale for method triangulation as a means of avoiding potential validity threats has typically been formulated in relatively general terms based on the potential strengths and weaknesses of different methods (see e.g., Abernethy et al., 1999 and Birnberg et al., 1990). As noted by Brewer and Hunter (1989) such a priori assumptions are insufficient for making informed judgements of how potential validity threats may be reduced in specific studies. Our understanding of how triangulation between qualitative and quantitative methods may be used as a validation technique in management accounting research thus requires further development. Specifically, a systematic attempt to take stock of prior experiences with different triangulation approaches would seem warranted. The purpose of this paper is to explicate these issues, based on a comparative review of relevant management accounting research. We concentrate our review to research combining elements of (qualitative) case study and (quantitative) survey methods, which constitutes the dominant mode of triangulating qualitative and quantitative methods in the management accounting literature.2 The remainder of the paper is structured as follows. In Section 2, we describe the notion of triangulation, especially method and theory triangulation, in some detail. This leads us to propose a few criteria for classifying and assessing empirical research. In Section 3, the use of triangulation is related to the three key issues of external, internal and construct validity, commonly used to assess research within the positivist tradition, whether of a predominantly quantitative or qualitative nature (see e.g., Abernethy et al., 1999, Cook and Campbell, 1979 and Yin, 1984). In Section 4, we review a number of attempts to combine case study and survey methods in the examination of specific management accounting issues with an eye to the triangulation approach adopted and the subsequent implications for the validity issues previously raised. We conclude the paper with a discussion of the ramifications of our observations in Section 5.