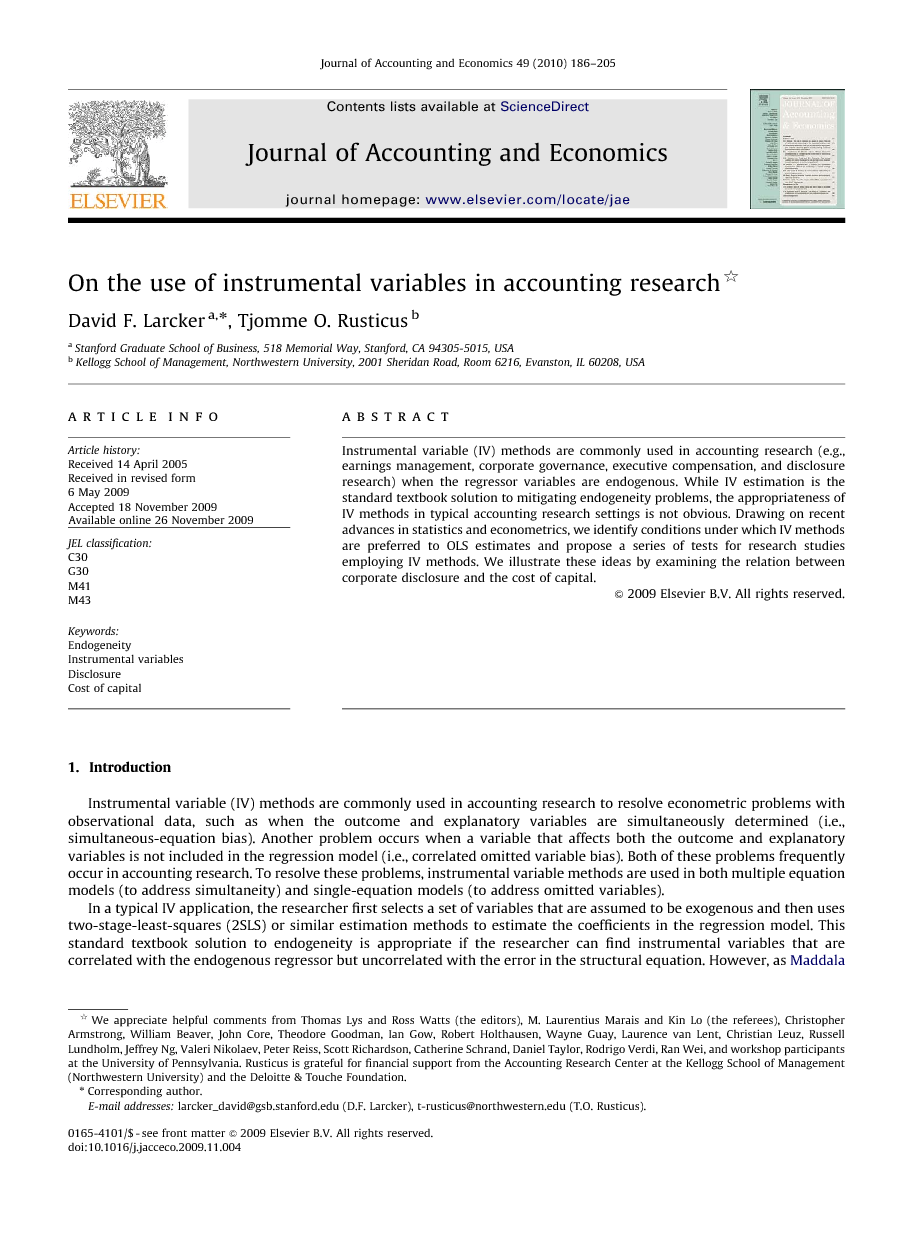 Instrumental variable (IV) methods are commonly used in accounting research (e.g., earnings management, corporate governance, executive compensation, and disclosure research) when the regressor variables are endogenous. While IV estimation is the standard textbook solution to mitigating endogeneity problems, the appropriateness of IV methods in typical accounting research settings is not obvious. Drawing on recent advances in statistics and econometrics, we identify conditions under which IV methods are preferred to OLS estimates and propose a series of tests for research studies employing IV methods. We illustrate these ideas by examining the relation between corporate disclosure and the cost of capital.

Instrumental variable (IV) methods are commonly used in accounting research to resolve econometric problems with observational data, such as when the outcome and explanatory variables are simultaneously determined (i.e., simultaneous-equation bias). Another problem occurs when a variable that affects both the outcome and explanatory variables is not included in the regression model (i.e., correlated omitted variable bias). Both of these problems frequently occur in accounting research. To resolve these problems, instrumental variable methods are used in both multiple equation models (to address simultaneity) and single-equation models (to address omitted variables). In a typical IV application, the researcher first selects a set of variables that are assumed to be exogenous and then uses two-stage-least-squares (2SLS) or similar estimation methods to estimate the coefficients in the regression model. This standard textbook solution to endogeneity is appropriate if the researcher can find instrumental variables that are correlated with the endogenous regressor but uncorrelated with the error in the structural equation. However, as Maddala (1977, p. 154) points out “Where do you get such a variable?” Similarly, Reiss and Wolak (2001) discuss the “magic” of finding an instrumental variable and cynically suggest that the best instrumental variable is developed by simply adding random error to the endogenous variable (which will be correlated with the original variable by construction). Consequently, it is necessary for researchers to understand the consequences of using instrumental variables that do not precisely conform to the necessary assumptions about these variables. The purpose of this paper is to evaluate IV applications in accounting research, synthesize the extensive literature in statistics and econometrics on IV estimators, and provide accounting researchers with a framework to guide the use of IV methods. Our analytical results and numerical simulations indicate that when the instrument is only weakly correlated with the regressor, IV methods can produce highly biased estimates when the instrumental variable is even slightly endogenous. In those cases, it is likely that IV estimates are more biased and more likely to provide the wrong statistical inference than simple OLS estimates that make no correction for endogeneity.1 It is important to highlight that our analysis should not be interpreted as indicating that it is impossible for accounting researchers to address endogeneity, and thus that there is no reason to even make an attempt at dealing with endogeneity.2 Rather, our analysis illustrates that researchers need to carefully justify their instrumental variables using economic theory and report contemporary specification tests for weak instruments and over-identifying restrictions. We believe that it is also useful to assess the sensitivity of OLS results to unobserved correlated (moderator and suppressor) variables using the methods developed by researchers such as Frank (2000), Rosenbaum (2002), and DiPrete and Gangl (2004). The remainder of the paper consists of six sections. In Section 2, we examine IV applications in 42 papers published in Journal of Accounting Research, Journal of Accounting and Economics, or The Accounting Review during the time period from 1995 to 2005. In general, the variables selected as instruments seem largely arbitrary and are not justified by any rigorous theoretical discussion. Moreover, few diagnostic statistics are reported in the published articles and this makes it virtually impossible for the reader to assess the quality of the IV application. In 3 and 4, we discuss the asymptotic and finite sample properties of OLS and IV estimators. In this discussion, we focus on situations where the selected instrumental variables are not completely exogenous (i.e., the instruments that are correlated with the error term in the structural model or “semi-endogenous”), and problems with “weak” instruments (i.e., instruments that explain only a small proportion of the variation in the endogenous variable). These results are then used in Section 5 to develop a framework for accounting researchers using IV methods. Section 6 compares the results produced by OLS and IV estimators in a contemporary accounting research setting where there is substantial reason to suspect that the primary regressor variable is endogenous. In particular, we examine the association between corporate disclosure and the cost of capital and conclude that in the context of our example OLS (which finds no statistical association) is preferred to IV estimation (which finds a negative statistical association). Although endogeneity remains a problem for the OLS results, the IV estimation is even less reliable than OLS. In Section 7, we illustrate the use of a methodology developed by Frank (2000) that enables the researcher to assess the possible impact of endogeneity on OLS parameter estimates. Concluding remarks about IV estimation in accounting research are provided in Section 8.

There is little doubt that endogeneity causes substantial econometric problems in virtually all non-experimental empirical accounting research. Accounting researchers are aware of these econometric problems and they commonly use IV (instrumental variable) methods in the hope of mitigating the inconsistency in parameters estimates. However, as we have shown in our synthesis and extension of the contemporary econometrics and statistics literatures, many IV applications in accounting are likely to produce highly misleading parameter estimates and inferential tests. We agree with the insightful comments by Hamermesh (2000, p. 371) regarding IV estimators: … its proponents are often too quick to assume that the chosen instrument is exogenous and generates a consistent estimate of the population parameter. One must be able to argue that the instrument is beyond the decision-makers’ control and that it describes behavior that is randomly distributed in the population one wishes to describe. Assuming that IV approaches are used, there are several fundamental requirements that must be met for any IV application in accounting research. First, it is necessary to describe the nature of the endogeneity problem inherent in the research question and to evaluate various alternative empirical approaches. Second, the choice of instrumental variables must be justified. In particular, the correlation between the instruments and the structural error has a critical impact on the usefulness of the IV estimators and researchers must use economic theory, prior empirical results, and intuition to convince the reader that the size of this correlation is small enough that IV estimators are superior to OLS estimators. Third, it is essential to report the full results of the first-stage regression, including the partial F-statistic and partial R2. Fourth, it is necessary to compare and contrast the estimates from OLS and 2SLS methods to see whether the differences between the methods are consistent with the underlying theory. Fifth, researchers should provide sensitivity analyses on the instruments and report tests for the appropriateness of the IV approach. Finally, it is important to assess the potential impact of unobserved confounding variables using techniques such as those develop by Frank (2000), Rosenbaum (2002), and DiPrete and Gangl (2004). Although this paper has mostly considered instrumental variable methods, there are other ways to assess and mitigate the econometric problems caused by endogeneity. A more direct method of coping with endogenous regressors is to develop and estimate a structural econometric model describing the research question.14 Some researchers consider the choice of instrumental variables to be a purely statistical exercise with little real economic foundation (i.e., find an exogenous variable that is correlated with the endogenous regressor, but at the same time uncorrelated with the disturbance). In contrast, structural modeling consists of specifying the economic model that is assumed to have given rise to the observed data (i.e., the data generating mechanism). This requires the researcher to be precise about which variables are exogenous and endogenous, the objective functions and optimization of the choice variables of the economic agents, and the nature of the equilibrium. Once the economic system is modeled, statistical assumptions are then placed on the model which allow for the estimation of the structural parameters of the model (typically using generalized method of moments or maximum likelihood estimation). An important benefit of a structural model relative to an instrumental variables approach is that it enables the researcher to make explicit causal statements with regard to the endogenous variables in the system rather than merely identifying them.15 The ultimate question is whether IV estimation is useful for typical empirical accounting research. While it is impossible to answer this question completely, our perspective is that accounting researchers need to be much more rigorous in selecting and justifying their instrumental variables. Moreover, researchers should report diagnostic tests for the first- and second-stage results, along with an assessment for the potential impact of unobserved confounding variables. We hope that our paper provides the necessary background for accounting researchers to collectively decide on the appropriate method for dealing with now the standard “endogeneity critique” of empirical research.