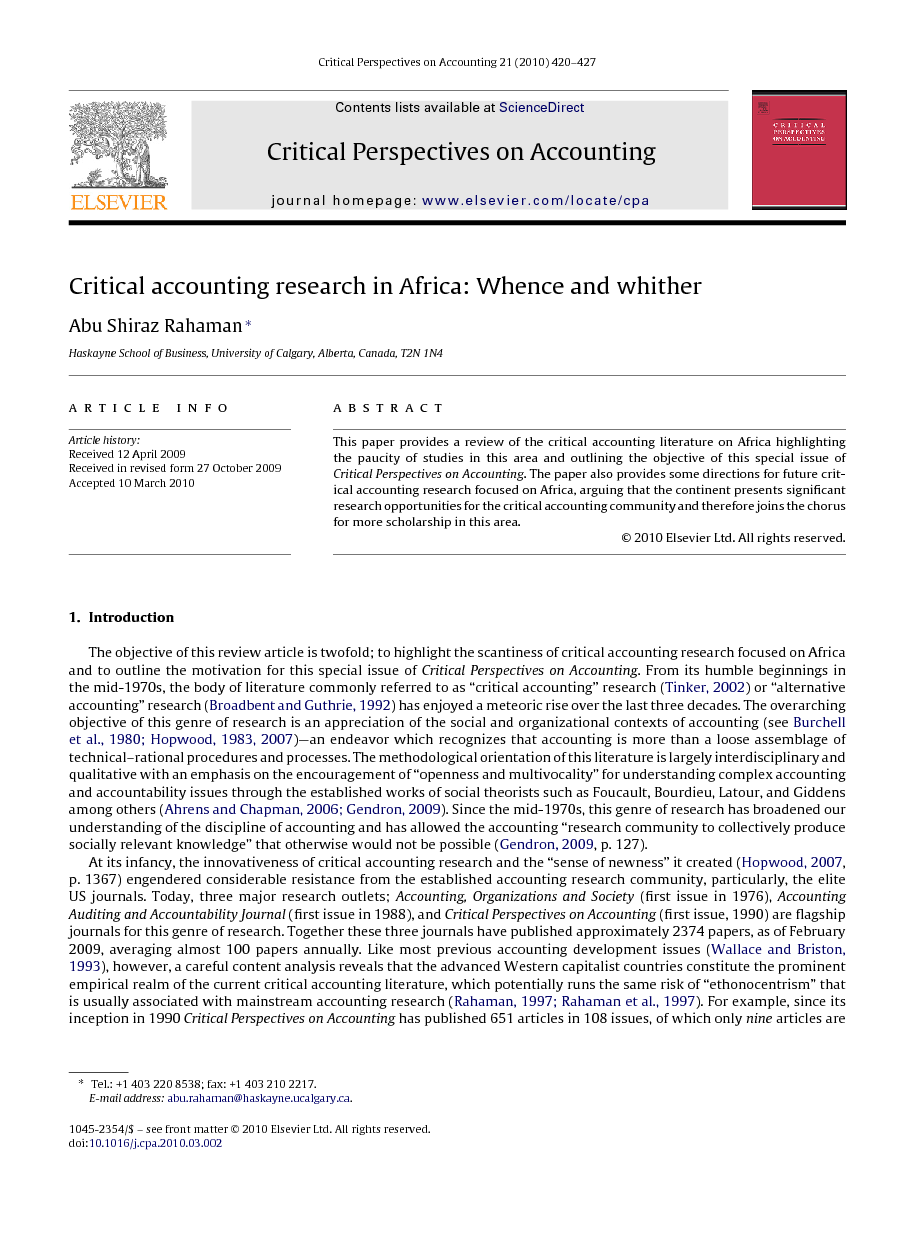 The objective of this review article is twofold; to highlight the scantiness of critical accounting research focused on Africa and to outline the motivation for this special issue of Critical Perspectives on Accounting. From its humble beginnings in the mid-1970s, the body of literature commonly referred to as “critical accounting” research (Tinker, 2002) or “alternative accounting” research (Broadbent and Guthrie, 1992) has enjoyed a meteoric rise over the last three decades. The overarching objective of this genre of research is an appreciation of the social and organizational contexts of accounting (see Burchell et al., 1980, Hopwood, 1983 and Hopwood, 2007)—an endeavor which recognizes that accounting is more than a loose assemblage of technical–rational procedures and processes. The methodological orientation of this literature is largely interdisciplinary and qualitative with an emphasis on the encouragement of “openness and multivocality” for understanding complex accounting and accountability issues through the established works of social theorists such as Foucault, Bourdieu, Latour, and Giddens among others ( Ahrens and Chapman, 2006 and Gendron, 2009). Since the mid-1970s, this genre of research has broadened our understanding of the discipline of accounting and has allowed the accounting “research community to collectively produce socially relevant knowledge” that otherwise would not be possible (Gendron, 2009, p. 127). At its infancy, the innovativeness of critical accounting research and the “sense of newness” it created (Hopwood, 2007, p. 1367) engendered considerable resistance from the established accounting research community, particularly, the elite US journals. Today, three major research outlets; Accounting, Organizations and Society (first issue in 1976), Accounting Auditing and Accountability Journal (first issue in 1988), and Critical Perspectives on Accounting (first issue, 1990) are flagship journals for this genre of research. Together these three journals have published approximately 2374 papers, as of February 2009, averaging almost 100 papers annually. Like most previous accounting development issues (Wallace and Briston, 1993), however, a careful content analysis reveals that the advanced Western capitalist countries constitute the prominent empirical realm of the current critical accounting literature, which potentially runs the same risk of “ethonocentrism” that is usually associated with mainstream accounting research ( Rahaman, 1997 and Rahaman et al., 1997). For example, since its inception in 1990 Critical Perspectives on Accounting has published 651 articles in 108 issues, of which only nine articles are focused specifically on African issues.1 In a special forum on critical accounting in differing national contexts (published in Critical Perspectives on Accounting, Volume 13, Number 4), the continent of Africa appears to have been one that did not receive any coverage. This clearly is a huge oversight, in light of the observation that the “blending of the general and specific ensures that critical accounting research does not stagnate in particular issues [contexts] and projects, but retains its vitality and versatility” (Tinker, 2002, p. 431). This oversight however, does not in any way diminish Tinker's (1980) pioneering efforts in introducing Africa as an important empirical context to the critical accounting community. Against this backdrop, this paper provides a review of the critical accounting literature on Africa, highlighting the paucity of studies in this area and making suggestions for future research. The framework used for this review categorizes the literature into two main streams; the first category focuses on studies that explore the history of accounting and its trajectory of development in the continent. The category also reviews works that highlight the unique indigenous, social, cultural, and institutional aspects of accounting in Africa including historical papers that explore the development of accounting practice in traditional subaltern African communities. The second stream of research that is reviewed focuses on accounting and the political process, including public sector governance in Africa. In particular, this category reviews the literature on government sector financial management and accountability, including external reporting and the processes of auditing that some describe as “alien” technologies in the African culture (Johnson, 1992). Papers in this category also include those that explore the role of the World Bank and other international development agencies in the diffusion of management control and financial management systems and practices as part of wider lender-driven reforms within the continent. The rest of the paper is organized as follows: in the next two sections, we provide a review of the critical accounting literature on African using the above frame of reference. The two sections draw together the literature that explores the political and historical challenges of the continent and the significance of accounting in mobilizing its socioeconomic development endeavors. The principal objective is to provide a foretaste of the richness of the African cultural, historical and political context and the potentialities of critical accounting and accountability research within that context. Before concluding, we provide summary insights including suggestions for future critical accounting research in Africa.

While the critical accounting literature on Africa has grown steadily over the years, it is far from matured. Unlike the general trends in the development of the critical accounting literature, foundational studies on Africa are a blend of descriptive and sufficiently theoretically informed analysis of accounting phenomena. Consistent with general trends, however, the most recent papers are more grounded in social theory as the African context increasingly becomes one that needs less justification (cf. HassabElnaby et al., 2003). The papers in this special issue show a continuation of this trend and attempt to open up space for further development of the suggested areas of future research in a similar theoretically informed manner. Governing the continent of Africa has been a major challenge since the return to self-rule in largely the second half of the 20th century. This has been particularly more pronounced in sub-Saharan Africa where instability has characterized the political landscape leading to major socioeconomic consequences—an instability that some have blamed on neo-colonialism (Falola, 2003). The Western powers continue to exert significant influence on governance processes through their control of global agencies such as the World Bank and IMF that have provided defacto financial governance in most sub-Saharan African countries. The introduction of these international financial institutions into the African political landscape has significantly eroded the traditional capacity of the state in Africa, as socioeconomic development policies are now almost exclusively prescribed by these agencies in the form of what is widely known as ‘conditionalities’. At the heart of these prescriptions are attempts to promote particular technologies of government such as accounting and auditing, engendering a bourgeoning research focus that seeks to uncover the processes of diffusing financial practices in the continent by these supranational bodies. The presence of these global agencies in sectors such as education, health, energy and water services and the introduction of policies such as structural adjustment programs across the continent provide critical accounting researchers with a significant empirical and exciting context. The current reforms occurring in the health sector of most African countries is yet another area that needs some attention from critical accounting researchers. Across the continent, there are crumbling hospitals and clinics that appear to have been overwhelmed by the HIV/AIDS pandemic. Significant financial flows are occurring in the health sector and therefore present an important context for investigating the role of accounting in such reform processes. In particular, research focusing on the justifications for health care reform and the forces behind such efforts as well as the financial practices that are promoted by the key architects would further our understanding of critical accounting in the continent. There is also an emerging research agenda that is primarily focused on how the introduced Western technologies of government have clashed with established African cultural traditions. In particular independent financial auditing of both the government and private sectors, which has received less research energy among African critical accounting researchers, continues to present puzzles awaiting empirical research investigation. Issues of auditing are also important in the accountability relationships that are increasingly becoming part of the emerging democracies in the continent. Indeed, the success of these new democracies is largely dependent on the perceived strength of the accountability relationships between the state machineries and the general population. Technologies of government such as independent financial auditing can no longer be perceived as alien to the African culture but rather instruments for enhancing the largely trust-based traditional African culture which emphasizes cooperation between members of clans and extended families. The perceived mutual exclusivity between independent financial auditing and the traditional African culture requires some empirical attention from critical accounting researchers. Corruption and the continuing environmental degradation in the continent also constitute important issues that need some attention from the critical accounting community. As the African Nobel Peace Laureate, Wangari Maathai lamented; we need to go beyond the images of poverty, desperation, and economic underdevelopment that have become almost engrained in our perception of Africa and start seeing ways that livelihoods can be improved in the continent. The starting point for such an endeavor is an appreciation of the impact that the twin issues of corruption and environmental degradation have had on the continent. This is an area where interdisciplinary researchers, more generally, have a huge contribution to make. The papers assembled in this issue of Critical Perspectives on Accounting should be seen as the initial steps towards such contribution and a move away from the dominant images about Africa.