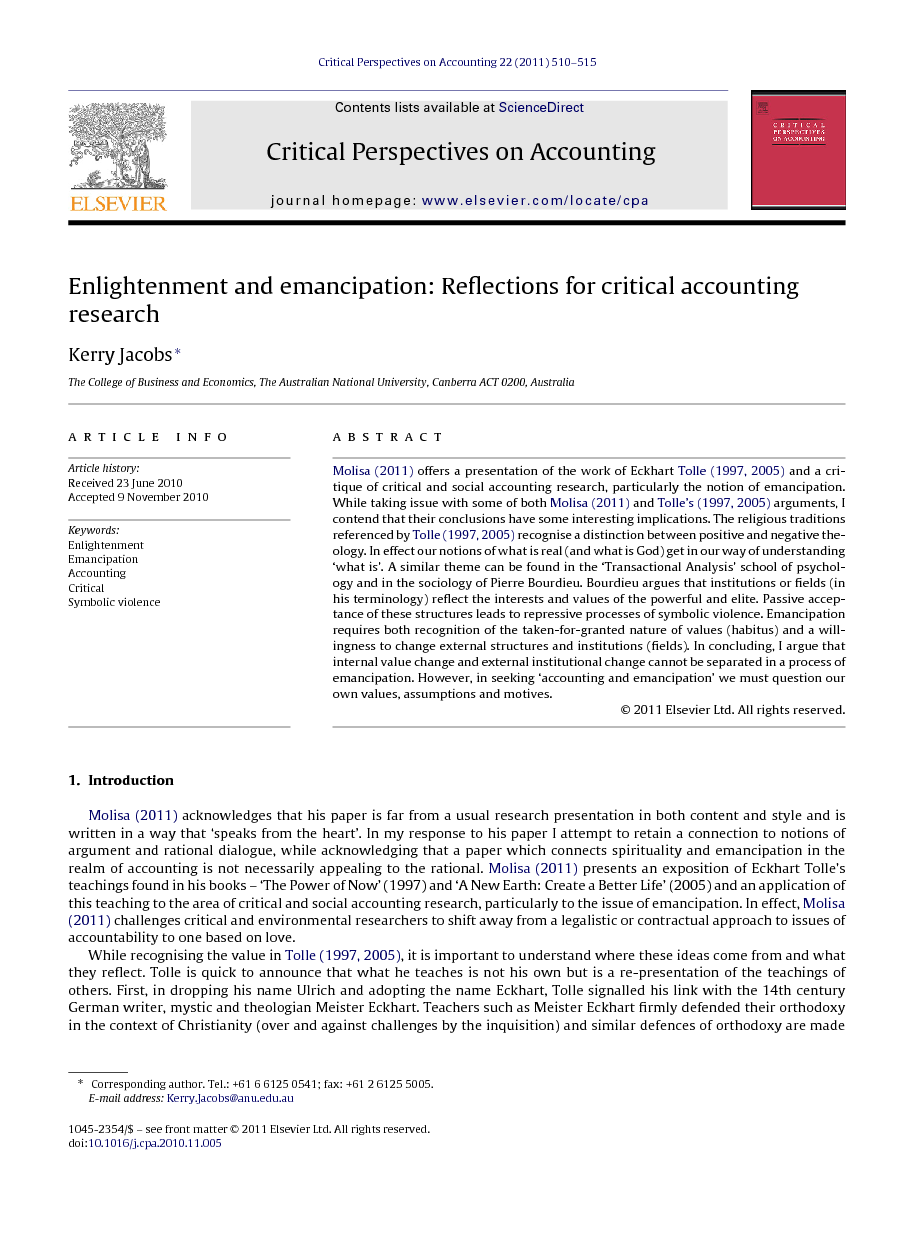 Molisa (2011) offers a presentation of the work of Eckhart Tolle, 1997 and Tolle, 2005 and a critique of critical and social accounting research, particularly the notion of emancipation. While taking issue with some of both Molisa (2011) and Tolle, 1997 and Tolle, 2005 arguments, I contend that their conclusions have some interesting implications. The religious traditions referenced by Tolle, 1997 and Tolle, 2005 recognise a distinction between positive and negative theology. In effect our notions of what is real (and what is God) get in our way of understanding ‘what is’. A similar theme can be found in the ‘Transactional Analysis’ school of psychology and in the sociology of Pierre Bourdieu. Bourdieu argues that institutions or fields (in his terminology) reflect the interests and values of the powerful and elite. Passive acceptance of these structures leads to repressive processes of symbolic violence. Emancipation requires both recognition of the taken-for-granted nature of values (habitus) and a willingness to change external structures and institutions (fields). In concluding, I argue that internal value change and external institutional change cannot be separated in a process of emancipation. However, in seeking ‘accounting and emancipation’ we must question our own values, assumptions and motives.

Molisa (2011) presents a stimulating and provocative position, which draws on the new-age teaching of Eckhart Tolle, which challenges the identification with the mind, to provide a basis for a critique of social, critical and environmental accounting literature. Molisa (2011) argues that social, critical and environmental accounting literature has become over-focused on metaphysical ideas and on conflict and that what is required is a refocus and reorientation around the notion of love. A focus on love would overcome the limits of existing theoretical approaches, engage more appropriately with the world by shifting from the focus on outward change and towards inward change, and bypass our tendency towards academic conflict and point scoring. Molisa (2011) is an enjoyable and challenging paper. It has forced me beyond my academic comfort-zone in style and in content and yet has provided an opportunity to synthesise different streams from my academic and personal readings and reflections. I must admit that I found the tendency to use the work of some authors uncritically and to dismiss others unreflectively annoying. However, while objecting to some arguments I also found myself agreeing with many of his conclusions. I challenge Molisa's (2011) uncritical use of Tolle, 1997 and Tolle, 2005 as the theological literature used by Tolle needs to be understood within the context of the traditions in which it arose. However, Tolle, 1997 and Tolle, 2005 grasps the point presented by these religious traditions that our notions (particularly notions of God) get in the way of our experiences (of God). Tolle, 1997 and Tolle, 2005 contribution is to extend this idea by challenging his personal processes of obsessive thinking and thereby recognising that his sense of self and therefore his ‘thoughts’ were socially constructed. The position adopted by Tolle can also be presented from the perspective of psychology and sociology. Transactional Analysis psychology would suggest that what we regard as ‘the self’ is a collection of scripts or programming primarily derived from our upbringing. Therefore these scripts and programming can be changed and modified even though they are normally subconscious. Pierre Bourdieu extends the psychological notion of script or programming to argue that taken-for-granted attitudes and practices can serve to benefit the powerful and elite and disadvantage the weak in processes of symbolic violence. As a consequence emancipation must involve both a change to physical conditions or resource arrangements and also changes to fundamental taken-for granted attitudes or values. However, the paradox is that in recognising that values or attitudes are socially constructed, the values of those wishing to ‘emancipate’ others are also subject to suspicion. An offer to ‘emancipate’ raises the question of who will actually benefit from the ‘act of emancipation’. Even the response of asking those who are to be emancipated ‘what they want’ does not resolve this issue as the answer will be clouded by symbolic violence. While this does have the danger of lapsing into a postmodern funk, Molisa's (2011) suggestion of moving beyond metaphysical values (which must also be treated with suspicion) to an active ethic of love has value. While arguing for an active questioning of our own values and assumptions (and incidentally the stated values of those we wish to emancipate), I argue that a process ethic of compassion is more grounded in the religious tradition Molisa (2011) presents, is more comprehensible to modern society and is reflected in contemporary moral and ethical challenges by thinkers such as Karen Armstrong. In effect compassion provides a basis for an emancipatory praxis which calls the powerful to release power and to place themselves in the shoes of the weaker party. Without someone letting go of positions of influence, power, status and resources emancipation is impossible. However, the danger is that our own disciplinary frameworks may be part of the problem rather than part of the solution. In the end, rather than calling for an emancipatory accounting, emancipation may have little or nothing to do with our notions of accounting.