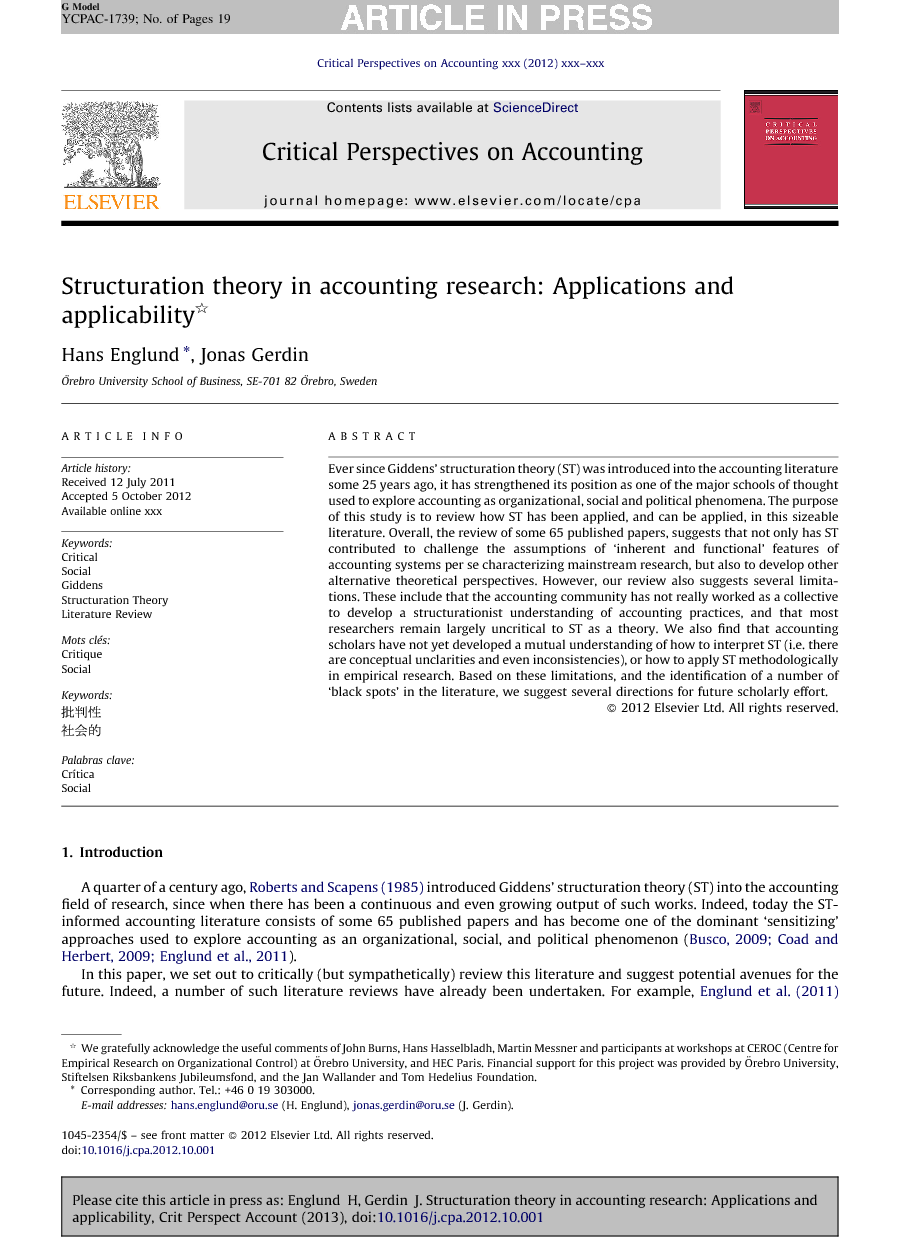 Ever since Giddens’ structuration theory (ST) was introduced into the accounting literature some 25 years ago, it has strengthened its position as one of the major schools of thought used to explore accounting as organizational, social and political phenomena. The purpose of this study is to review how ST has been applied, and can be applied, in this sizeable literature. Overall, the review of some 65 published papers, suggests that not only has ST contributed to challenge the assumptions of ‘inherent and functional’ features of accounting systems per se characterizing mainstream research, but also to develop other alternative theoretical perspectives. However, our review also suggests several limitations. These include that the accounting community has not really worked as a collective to develop a structurationist understanding of accounting practices, and that most researchers remain largely uncritical to ST as a theory. We also find that accounting scholars have not yet developed a mutual understanding of how to interpret ST (i.e. there are conceptual unclarities and even inconsistencies), or how to apply ST methodologically in empirical research. Based on these limitations, and the identification of a number of ‘black spots’ in the literature, we suggest several directions for future scholarly effort.

A quarter of a century ago, Roberts and Scapens (1985) introduced Giddens’ structuration theory (ST) into the accounting field of research, since when there has been a continuous and even growing output of such works. Indeed, today the ST-informed accounting literature consists of some 65 published papers and has become one of the dominant ‘sensitizing’ approaches used to explore accounting as an organizational, social, and political phenomenon (Busco, 2009, Coad and Herbert, 2009 and Englund et al., 2011). In this paper, we set out to critically (but sympathetically) review this literature and suggest potential avenues for the future. Indeed, a number of such literature reviews have already been undertaken. For example, Englund et al. (2011) recently discussed the past, present, and future of the ST-based accounting literature, with a main focus on the major contributions and limitations of this literature in relation to other interpretive and critical streams of accounting research. In other cases, accounting researchers have reviewed this literature with a focus on particular empirical issues or domains, such as Ahrens and Chapman's (2007) discussion of accountability issues, and Meira et al.’s (2010) discussion of inter-firm relationships (see also Busco, 2009 and Scapens, 2006). In contrast to these previous reviews, we focus our attention on the (various) ways in which accounting scholars have applied, i.e. brought in and drawn upon, ST when conducting accounting research. More specifically, the purposes are: (i) to evaluate how this literature has applied key ST concepts and assumptions both theoretically and methodologically, and analyze to what extent the accounting community has worked as a collective to capitalize on these core ideas and (ii) to point out relatively unexplored potentials in the accounting-oriented ST literature and, based on these, identify opportunities for future research. Overall, our emergent analysis of how ST has been applied suggests four key themes reflecting large and to some extent surprising variations in the literature. These are: (i) how individual core ST concepts have been cited and translated into an accounting context, (ii) the research strategies adopted when applying ST in accounting research, (iii) how accounting researchers have collected data on, and analyzed, structuration processes, and (iv) how the accounting community has worked as a collective to capitalize on these ST ideas and assumptions. Based on both quantitative and qualitative analyses of these themes, we conclude that the literature seen as a whole has made several important contributions to the larger accounting literature—not least through the introduction of a duality perspective—and the development of several important research topics, such as that of (systems of) accountability (cf. Roberts and Scapens, 1985; see also the discussion in Ahrens and Chapman, 2007). We also identify a number of limitations—including, conceptual unclarities and limited cumulativity—based on which we propose an array of directions for future research. The remainder of our paper is organized as follows. The next section presents a summary of the core concepts and underlying arguments of Giddens’ works. Next, we describe how the articles reviewed were collected and analyzed, followed by an articulation of the findings organized around the four themes (mentioned above). In the concluding sections, we discuss the findings and propose a number of possible avenues for future research.

The purposes of this study are to in a critical, yet sympathetic way, explore how accounting scholars have drawn upon Giddens’ theory of structuration and, based on this, suggest avenues for future research. Unlike previous reviews of this literature—which have typically focused on particular issues/findings (see e.g. Ahrens and Chapman, 2007, Baxter and Chua, 2003, Englund et al., 2011 and Meira et al., 2010)—this paper thus sets out to specifically discuss applications and applicability of ST as a framework for understanding accounting practices as an organizational, social, and political phenomenon. Overall, we find that not only has ST contributed to challenge assumptions of ‘inherent and functional’ features of accounting systems per se characterizing mainstream research, but also to develop other alternative theoretical perspectives, including new-institutional theory and critical theory. In particular, the non-deterministic view on accounting continuity and change implied by the key notion of duality of structure and related concepts such as knowledgeable agency, power and dialectic of control, have proved useful (see e.g. Collier, 2001, Mouritsen and Skaerbaek, 1995 and Saravanamuthu and Tinker, 2003). However, our review also suggests several limitations. These include that the accounting community has not really worked as a collective to develop a structurationist understanding of accounting practices, and that most researchers remain largely uncritical to ST as a theory. We also find that neither have we developed a mutual understanding of how to interpret ST as a theory (i.e. there are conceptual unclarities and even inconsistencies), nor how to apply ST methodologically in empirical research. However, based on these limitations, and the identification of a number of ‘black spots’, we also conclude that we have not yet explored the full potential of ST. On the contrary, we strongly believe that additional theoretical and empirical advancements are possible through further careful, and critical, applications of Giddens’ works. In fact, the accounting discipline has proud traditions to defend insofar as the pioneering works of Boland, Macintosh, Roberts and Scapens have been acknowledged by (and also reprinted in) the more general sociological literature on Giddens (Bryant and Jary, 1997 and Bryant and Jary, 2001). So the question is perhaps not whether, but when and how, accounting scholars will follow the lead of the IS and management literatures and develop phenomenon specific adaptations of ST, or even take the next step to develop ST per se.