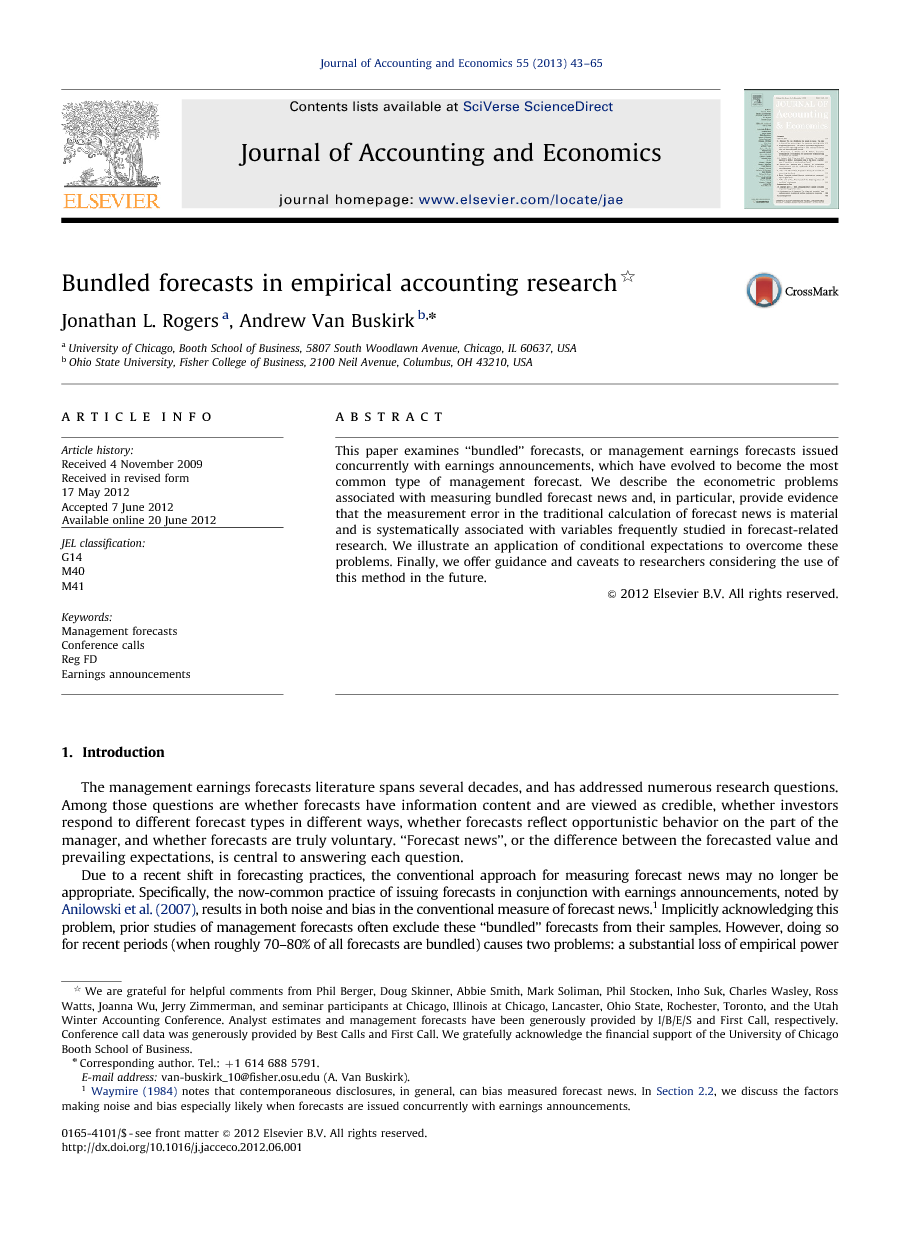 This paper examines “bundled” forecasts, or management earnings forecasts issued concurrently with earnings announcements, which have evolved to become the most common type of management forecast. We describe the econometric problems associated with measuring bundled forecast news and, in particular, provide evidence that the measurement error in the traditional calculation of forecast news is material and is systematically associated with variables frequently studied in forecast-related research. We illustrate an application of conditional expectations to overcome these problems. Finally, we offer guidance and caveats to researchers considering the use of this method in the future.

The management earnings forecasts literature spans several decades, and has addressed numerous research questions. Among those questions are whether forecasts have information content and are viewed as credible, whether investors respond to different forecast types in different ways, whether forecasts reflect opportunistic behavior on the part of the manager, and whether forecasts are truly voluntary. “Forecast news”, or the difference between the forecasted value and prevailing expectations, is central to answering each question. Due to a recent shift in forecasting practices, the conventional approach for measuring forecast news may no longer be appropriate. Specifically, the now-common practice of issuing forecasts in conjunction with earnings announcements, noted by Anilowski et al. (2007), results in both noise and bias in the conventional measure of forecast news.1 Implicitly acknowledging this problem, prior studies of management forecasts often exclude these “bundled” forecasts from their samples. However, doing so for recent periods (when roughly 70–80% of all forecasts are bundled) causes two problems: a substantial loss of empirical power and the risk of drawing erroneous conclusions from a non-representative sample. Considering the ongoing importance of management forecasts,2 a new approach to measuring and evaluating forecast news is necessary. This study examines bundled forecasts, with the goal of identifying and correcting the measurement error inherent in the traditional calculation of forecast news as applied to bundled forecasts. We provide a new method for calculating forecast news for bundled forecasts, validate this measure based on investor response, and show that failing to appropriately measure forecast news yields misleading inferences about forecast characteristics and the managerial incentives behind those disclosures. As an illustration of misleading inferences, we estimate that the conventional measure of forecast news misclassifies approximately one-quarter of bundled forecasts, most of which are good news forecasts incorrectly identified as bad news. (A detailed discussion can be found in Section 5.) After we account for the measurement error, the bundled forecasts in our sample represent good news, on average, which is consistent with evidence of selective disclosure in other settings (Cheng and Lo, 2006, Kothari et al., 2009 and Sletten, 2009). Using the traditional method of calculating forecast news would have implied the opposite—that forecasts were more likely to reflect bad news.3 We then identify several specific contexts in which researchers have used forecast news as a measure of strategic disclosure, such as securities litigation, insider trading, and the meeting-or-beating expectations “game.” In each of these settings, the measurement error in traditional forecast news is significantly correlated with the variable of interest, which indicates that incorrectly measuring forecast news will likely bias empirical studies in these areas. Including the contemporaneous earnings surprise as an additional regressor (as prior studies have done in an effort to solve the problem) is not a fix; forecast news measurement error continues to be correlated with variables such as insider trading and litigation risk even after controlling for the earnings surprise. Nor can researchers avoid the problem by excluding bundled forecasts from their sample. We document that the characteristics of bundled forecasts differ significantly from those of non-bundled forecasts; inferences drawn from a sample of non-bundled forecasts do not appear to be generalizable to the (much larger) population of bundled forecasts. In short, the traditional measure of forecast news introduces bias into a variety of commonly studied research settings, and this paper describes a method of correcting that bias. We recognize that our method of calculating conditional analyst expectations and forecast news is new and will likely be improved in the future. In addition, we note several caveats related to our proposed method. First, our measure of conditional forecast news is, itself, measured with error. We use the analyst response to non-forecasting firms' earnings announcements to infer how analysts would have responded to forecasting firms' earnings announcements in the absence of a forecast. If analyst response differs between forecasting and non-forecasting firms because of non-forecast reasons (e.g., differences in other earnings-related disclosures), the accuracy of the estimate will suffer. Second, our ability to estimate analyst response is better for shorter-horizon forecasts of annual earnings, and is worse for quarterly earnings estimates and longer-horizon estimates. Consequently, conditional forecast news for quarterly and long-horizon forecasts will be measured with less precision than for annual and short-horizon forecasts.4 Finally, our model uses only the current earnings surprise to update analyst expectations, which effectively treats forecasting firms as if they issue a single forecast with their earnings announcement. In practice, some firms issue multiple forecasts with their earnings announcements. Because of this, our model is more appropriate when firms issue a single forecast or when researchers are not interested in distinguishing forecast news among multiple forecasts issued on the same date. We also emphasize that our method may not be appropriate or desirable in all forecast-related settings. The methodological issues discussed in this paper relate solely to forecast news (and the associated market response); forecast bundling does not cause measurement problems in forecast bias (relative to realized earnings) or forecast precision. Researchers may also consider different techniques to quantify forecast news for bundled forecasts. One alternative would be to follow a similar procedure to what we describe, but decompose the observed stock price response into the forecast and non-forecast components. The estimated forecast component of returns could then be used to infer the sign/magnitude of forecast news.5 Notwithstanding these caveats, we believe this study identifies a common measurement problem and provides a way for researchers to address that problem. At the very least, researchers can use conditional forecast news in concert with traditional forecast news to triangulate their results and ensure the results are not influenced by the measurement error we discuss. This paper proceeds as follows: Section 2 discusses related research and motivates our analysis. Our sample is described in Section 3. Section 4 describes the process by which we estimate and validate conditional forecast news, while Section 5 examines the conditional forecast news and the estimated measurement error in unconditional news. Section 6 discusses alternative methods for calculating conditional forecast news. Section 7 summarizes.