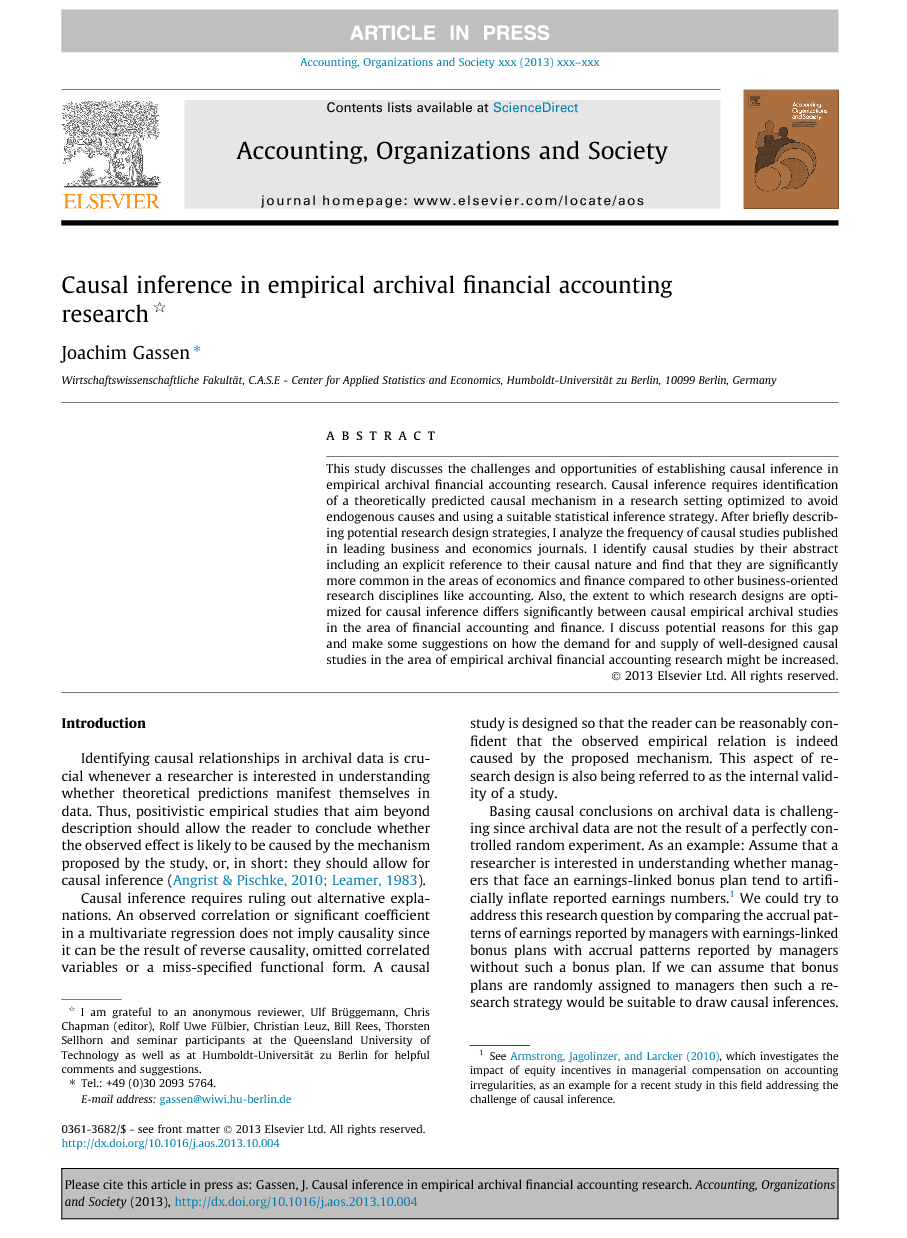 This study discusses the challenges and opportunities of establishing causal inference in empirical archival financial accounting research. Causal inference requires identification of a theoretically predicted causal mechanism in a research setting optimized to avoid endogenous causes and using a suitable statistical inference strategy. After briefly describing potential research design strategies, I analyze the frequency of causal studies published in leading business and economics journals. I identify causal studies by their abstract including an explicit reference to their causal nature and find that they are significantly more common in the areas of economics and finance compared to other business-oriented research disciplines like accounting. Also, the extent to which research designs are optimized for causal inference differs significantly between causal empirical archival studies in the area of financial accounting and finance. I discuss potential reasons for this gap and make some suggestions on how the demand for and supply of well-designed causal studies in the area of empirical archival financial accounting research might be increased.

Identifying causal relationships in archival data is crucial whenever a researcher is interested in understanding whether theoretical predictions manifest themselves in data. Thus, positivistic empirical studies that aim beyond description should allow the reader to conclude whether the observed effect is likely to be caused by the mechanism proposed by the study, or, in short: they should allow for causal inference (Angrist and Pischke, 2010 and Leamer, 1983). Causal inference requires ruling out alternative explanations. An observed correlation or significant coefficient in a multivariate regression does not imply causality since it can be the result of reverse causality, omitted correlated variables or a miss-specified functional form. A causal study is designed so that the reader can be reasonably confident that the observed empirical relation is indeed caused by the proposed mechanism. This aspect of research design is also being referred to as the internal validity of a study. Basing causal conclusions on archival data is challenging since archival data are not the result of a perfectly controlled random experiment. As an example: Assume that a researcher is interested in understanding whether managers that face an earnings-linked bonus plan tend to artificially inflate reported earnings numbers.1 We could try to address this research question by comparing the accrual patterns of earnings reported by managers with earnings-linked bonus plans with accrual patterns reported by managers without such a bonus plan. If we can assume that bonus plans are randomly assigned to managers then such a research strategy would be suitable to draw causal inferences. Obviously, the central identifying assumption of the above example (that bonus plans are randomly assigned) is courageous to say the least. In reality, bonus plans and managers are endogenously and simultaneously determined by, e.g., the recruiting and compensation committee. What this means is: Certain types of managers and certain types of firms will have a tendency to agree on certain types of compensation packages: The bonus plan will be endogenous to the problem at hand and not random. What can a researcher do to address this challenge? Four options seem feasible. First, one could decide not to address the problem. In a carefully written paper, this would mean choosing a non-experimental descriptive research design, avoiding any causal interpretation of the findings and explicit caveats at prominent places throughout the paper. Second, the researcher can try to model the bonus plan choice. If the researcher assumes (another identifying assumption) that the bonus plan decision is based on observable variables only, then matching or regression approaches of standard micro-econometrics can be used to address the endogenous nature of the bonus plan. Again, the assumption that the determinants of the bonus plan choice can be observed is questionable. As an example, it seems reasonable that the unobservable psychological nature of a manager has a direct impact on earnings management behavior. It also seems likely that compensation committees cater to the psychological profile of a manager when designing the compensation package. If the researcher feels that the endogenous choice at hand is at least partly based on unobservable variables, the third potential strategy is to identify an instrumental variable or a set of instrumental variables that are correlated with the endogenous choice but have no direct impact on the outcome variable of interest (here, the earnings management choice). The problem that a researcher faces when identifying a suitable instrument lies with the impossibility to test for the validity of an instrument. The use of an instrument must be justified theoretically. In the area of social science, a tight theoretical argument seems fairly unlikely in many cases. Thus, a critical empirical researcher might be tempted to resort to strategy number four: Identifying a setting where bonus plans can be assumed to be exogenously imposed on firms. For example, it might be possible that some legislation(s) at some point in time introduced a regulatory ban of earnings-based bonus plans. Such a natural experiment allows for research designs that help causal inference by exogenously manipulating the treatment of interest. Identifying such a setting requires institutional expertise of the researcher. Summing up, a causal research design based on archival data requires (a) a clear understanding of the theoretical mechanism (the cause-effect relationship) that the researcher whishes to test, (b) a concept for a first-best random experiment that would allow her or him to test for the existence of this mechanism, (c) information on why this first-best experiment is not feasible, (d) a quasi-experimental research setting that is feasible and deviates from the first-best experiment as little as possible and (e) tools for statistical inference that address the unavoidable shortcomings of the second-best research design (Angrist and Pischke, 2008 and Shadish et al., 2001).