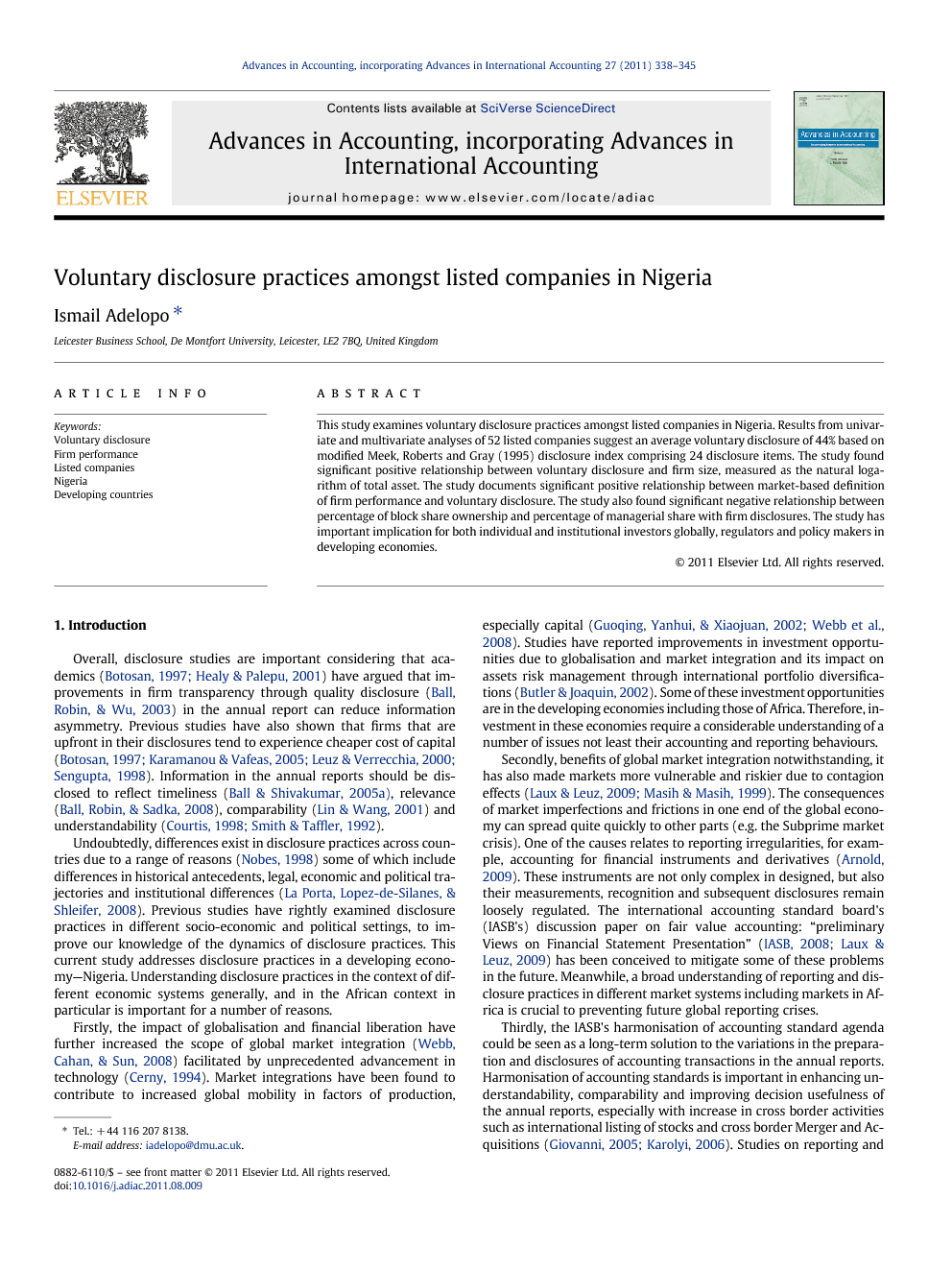 Overall, disclosure studies are important considering that academics (Botosan, 1997 and Healy and Palepu, 2001) have argued that improvements in firm transparency through quality disclosure (Ball, Robin, & Wu, 2003) in the annual report can reduce information asymmetry. Previous studies have also shown that firms that are upfront in their disclosures tend to experience cheaper cost of capital (Botosan, 1997, Karamanou and Vafeas, 2005, Leuz and Verrecchia, 2000 and Sengupta, 1998). Information in the annual reports should be disclosed to reflect timeliness (Ball & Shivakumar, 2005a), relevance (Ball, Robin, & Sadka, 2008), comparability (Lin & Wang, 2001) and understandability (Courtis, 1998 and Smith and Taffler, 1992). Undoubtedly, differences exist in disclosure practices across countries due to a range of reasons (Nobes, 1998) some of which include differences in historical antecedents, legal, economic and political trajectories and institutional differences (La Porta, Lopez-de-Silanes, & Shleifer, 2008). Previous studies have rightly examined disclosure practices in different socio-economic and political settings, to improve our knowledge of the dynamics of disclosure practices. This current study addresses disclosure practices in a developing economy—Nigeria. Understanding disclosure practices in the context of different economic systems generally, and in the African context in particular is important for a number of reasons. Firstly, the impact of globalisation and financial liberation have further increased the scope of global market integration (Webb, Cahan, & Sun, 2008) facilitated by unprecedented advancement in technology (Cerny, 1994). Market integrations have been found to contribute to increased global mobility in factors of production, especially capital (Guoqing et al., 2002, Spring and Webb et al., 2008). Studies have reported improvements in investment opportunities due to globalisation and market integration and its impact on assets risk management through international portfolio diversifications (Butler & Joaquin, 2002). Some of these investment opportunities are in the developing economies including those of Africa. Therefore, investment in these economies require a considerable understanding of a number of issues not least their accounting and reporting behaviours. Secondly, benefits of global market integration notwithstanding, it has also made markets more vulnerable and riskier due to contagion effects (Laux and Leuz, 2009 and Masih and Masih, 1999). The consequences of market imperfections and frictions in one end of the global economy can spread quite quickly to other parts (e.g. the Subprime market crisis). One of the causes relates to reporting irregularities, for example, accounting for financial instruments and derivatives (Arnold, 2009). These instruments are not only complex in designed, but also their measurements, recognition and subsequent disclosures remain loosely regulated. The international accounting standard board's (IASB's) discussion paper on fair value accounting: “preliminary Views on Financial Statement Presentation” (International Accounting Standards Board, 2008 and Laux and Leuz, 2009) has been conceived to mitigate some of these problems in the future. Meanwhile, a broad understanding of reporting and disclosure practices in different market systems including markets in Africa is crucial to preventing future global reporting crises. Thirdly, the IASB's harmonisation of accounting standard agenda could be seen as a long-term solution to the variations in the preparation and disclosures of accounting transactions in the annual reports. Harmonisation of accounting standards is important in enhancing understandability, comparability and improving decision usefulness of the annual reports, especially with increase in cross border activities such as international listing of stocks and cross border Merger and Acquisitions (Giovanni, 2005 and Karolyi, 2006). Studies on reporting and disclosure practices amongst listed companies in Nigeria are therefore very important for both individual and institutional investors globally, market regulators, academics and other stakeholders by creating greater awareness on reporting practices. Fourthly, a demand side argument also motivates a study such as this, on the ground that at macroeconomic level, most of the developing economies require substantial foreign direct investment to support internally generated capital stock necessary for growth and developments. Similarly, firms operating in these economies could benefit from foreign investments in various ways. However, foreign investors from higher disclosure and more transparent systems would demand comparable protection, level of transparency and disclosure from companies in the developing economies or higher returns in lieu as a prerequisite for their investments; this is similar to the bonding effects of cross listing at a broader level (Doidge, 2004 and Licht, 2003). Therefore, an understanding of current disclosure practices is important not only for potential foreign investors, but also for policy makers and international organisations that may be keen to achieve economic growth and development within the recipient economies. Lastly, Nigeria is chosen for this study because of its size, with over 140 million people; she is also the 8th largest producer of oil which provides her with over 90% of her total revenue. Amongst the sub-Saharan African countries, she plays influential roles both in the political and economy landscapes of the area for example in Economic Community of West African States (ECOWAS) and African Union (AU). Thus, an understanding of the disclosure practices amongst listed companies in Nigeria is important in understanding reporting and disclosure practices in the West African region. Improvements in disclosure practices in Nigeria could influence practices in other neighbouring countries through ‘spatial effects syndrome’.

This paper examined voluntary disclosure of information in the annual reports for a sample of non-financial listed companies in Nigeria. The motivation for the study was hinged on a number of reasons. Nigeria is the largest market in African by the virtue of her size; she also plays significant and dominant roles in the economics and politics of the region, both in the ECOWAS and the AU. Furthermore, there is gulf in our knowledge of disclosure practices from this region of the global economy. Improvements in our insight on this issue are crucial for a more transparent global market where cross listing and cross border M&A is growing. The result from the univariate and multivariate analyses are interesting. Focusing more on the multivariate analyses because they appear more robust, the study found significant positive relationship between level of voluntary corporate disclosure and firm size, measured as the natural logarithms of total assets. This confirms that bigger organisations tend to make more voluntary disclosure than small firms. The study also found that better performing firms provide more corporate disclosure when market measure of firm performance such as earnings per share and dividend were used. Surprisingly, return on asset (ROA) showed a significant negative relationship with voluntary disclosure against an expected positive relationship. The result may be due to the fact that the definition of ROA is driven more by accounting definition of profit which may be biassed. Similar explanation may suffice for the documented insignificant relationship between profit after tax and voluntary disclosure in the annual reports. The study found interesting result with respect to the interaction between firm ownership structures and voluntary disclosures. Percentage of block share ownership and management ownership was found to have statistically strong inverse relationship with firms' voluntary disclosures at 1% and 5% respectively. These results are in line with theoretical expectations. Foreign share ownership was not significant in explaining voluntary disclosure amongst listed companies in Nigeria. Still on ownership structure and voluntary disclosure, the study found that dispersed share ownership, measured as the total number of shareholders in a firm, is sensitive to measure of firm size and firm performance. When firm size was measured with reference to total asset and firm performance measured with reference to return on asset and dividend, dispersed ownership showed significant positive relationship at 5% level with voluntary disclosure. But, when firm performance was defined just as return on asset, it showed a stronger statistical significance, although return on asset became statistically insignificant and negative. The important point here is that dispersed ownership structure is significantly related to voluntary disclosure and it is sensitive to definition of both size and performance. The study found significant positive relationship between auditor type and voluntary disclosure in the annual. Future studies could explore the auditing market in Nigeria closer. This is because the study found that smaller firms have visible presence in the audit of the listed companies in Nigeria. Future study should examine the audits reports in the annual and extend the current study with bigger sample size and a closer examination of the differences in reporting styles between the big-4 and non-big-4 audit firms. The findings in the study should be interpreted with a number of caveats. Firstly, the sample size may be a source of criticism. Whilst the difficulties involved in getting company based information for a study like this in a developing economy such as Nigeria is appreciated, nevertheless, future studies should endeavour to use larger sample size. It is also important that efforts should be made to improve on the level of data collection, integrity and maintenance in developing countries in Africa to enable richer and more accounting research to be undertaken in these areas. It is possible that the definition of the variables introduces bias in the result for example; measure of foreign share ownership could be improved on by future studies. Results from this study has important policy implications for standard setters, international organisations working with developing economies on attracting foreign direct investments, for individual and institutional investors both domestically and at the international level.