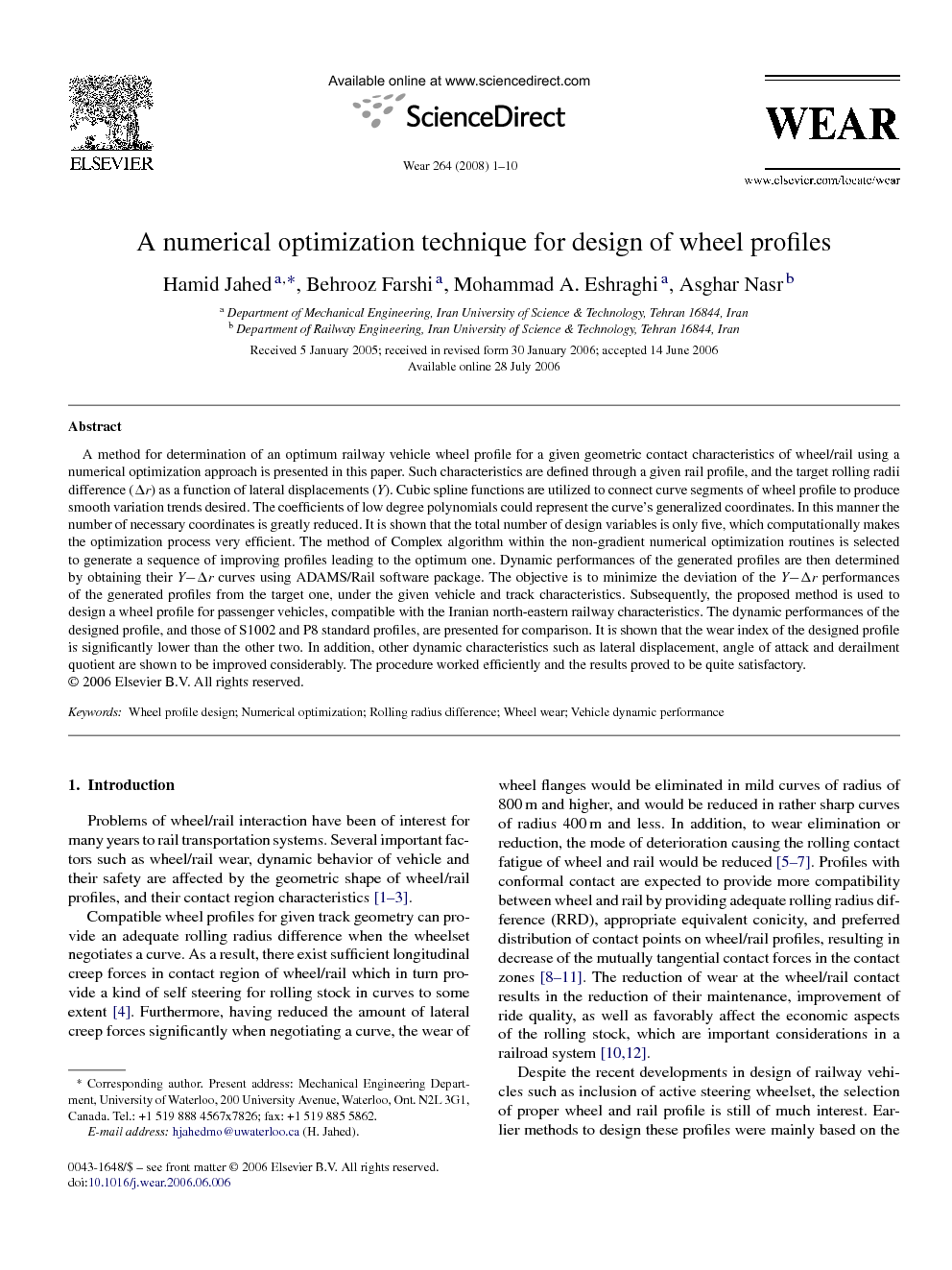 A method for determination of an optimum railway vehicle wheel profile for a given geometric contact characteristics of wheel/rail using a numerical optimization approach is presented in this paper. Such characteristics are defined through a given rail profile, and the target rolling radii difference (Δr) as a function of lateral displacements (Y). Cubic spline functions are utilized to connect curve segments of wheel profile to produce smooth variation trends desired. The coefficients of low degree polynomials could represent the curve's generalized coordinates. In this manner the number of necessary coordinates is greatly reduced. It is shown that the total number of design variables is only five, which computationally makes the optimization process very efficient. The method of Complex algorithm within the non-gradient numerical optimization routines is selected to generate a sequence of improving profiles leading to the optimum one. Dynamic performances of the generated profiles are then determined by obtaining their Y−Δr curves using ADAMS/Rail software package. The objective is to minimize the deviation of the Y−Δr performances of the generated profiles from the target one, under the given vehicle and track characteristics. Subsequently, the proposed method is used to design a wheel profile for passenger vehicles, compatible with the Iranian north-eastern railway characteristics. The dynamic performances of the designed profile, and those of S1002 and P8 standard profiles, are presented for comparison. It is shown that the wear index of the designed profile is significantly lower than the other two. In addition, other dynamic characteristics such as lateral displacement, angle of attack and derailment quotient are shown to be improved considerably. The procedure worked efficiently and the results proved to be quite satisfactory.

Problems of wheel/rail interaction have been of interest for many years to rail transportation systems. Several important factors such as wheel/rail wear, dynamic behavior of vehicle and their safety are affected by the geometric shape of wheel/rail profiles, and their contact region characteristics [1], [2] and [3]. Compatible wheel profiles for given track geometry can provide an adequate rolling radius difference when the wheelset negotiates a curve. As a result, there exist sufficient longitudinal creep forces in contact region of wheel/rail which in turn provide a kind of self steering for rolling stock in curves to some extent [4]. Furthermore, having reduced the amount of lateral creep forces significantly when negotiating a curve, the wear of wheel flanges would be eliminated in mild curves of radius of 800 m and higher, and would be reduced in rather sharp curves of radius 400 m and less. In addition, to wear elimination or reduction, the mode of deterioration causing the rolling contact fatigue of wheel and rail would be reduced [5], [6] and [7]. Profiles with conformal contact are expected to provide more compatibility between wheel and rail by providing adequate rolling radius difference (RRD), appropriate equivalent conicity, and preferred distribution of contact points on wheel/rail profiles, resulting in decrease of the mutually tangential contact forces in the contact zones [8], [9], [10] and [11]. The reduction of wear at the wheel/rail contact results in the reduction of their maintenance, improvement of ride quality, as well as favorably affect the economic aspects of the rolling stock, which are important considerations in a railroad system [10] and [12]. Despite the recent developments in design of railway vehicles such as inclusion of active steering wheelset, the selection of proper wheel and rail profile is still of much interest. Earlier methods to design these profiles were mainly based on the experience of railway operators using various rules of thumb regarding conicity, flange angle, flange root radius, etc. [13]. Yamada et al. [14] and Sasaki et al. [15] used conicity charts to optimize the wheel tread profile in order to improve the curving performance and stability of the rolling stock, and increasing the life of the wheel profile. More recently, optimization methods have been employed to cope with the complexity of wheel profile design. Shevtsov et al. [16] employed a multipoint approximation based on response surface fitting to design an optimum wheel profile that matches a target RRD. The design optimization variables were reduced to 14 moving points. Shen et al. [17] developed a target-oriented method for the design of railway wheel profiles. The design methodology made use of a unique inverse method which employed contact angles and rail profile information. Persson and Iwnicki [18] introduced the genetic algorithm of optimization into the field of wheel profile design. This paper introduces a numerical optimization method for wheel profile design. The method is a numerical solution to an inverse problem of finding a wheel profile that results in a given Y − Δr response for a given track characteristics, similar to the method used in [16]. The use of spline functions for wheel profile approximation has enabled easy integration of the ADAMS/Rail software into the optimization iterations. The low number of design variables and high computational efficiency of the proposed optimization algorithm proved to be quite promising. The sequence followed to describe the method consists of, problem definition, mathematical modeling, curve generation scheme, and optimization algorithm. Application of the method to wheel profile design of recently constructed north-eastern Iranian railway is presented next. Features of the designed profile including contact points, angle of attack and lateral displacement response with the time, wear index and derailment quotient are compared with those of the known S1002 and P8 widely used standard profiles.

In the present work a numerical optimization method is introduced for design of wheel profiles according to a given track geometry. The method makes use of a reduced set of generalized coordinates together with cubic spline curves in a linear programming formulation for the generation of profiles whose performances are obtained from dynamic simulation software ADAMS/Rail. Subsequently, following the Complex algorithm for seeking the optimum and using the least square deviation from a target Y − Δr curve as the objective function to be minimized, the most suitable profile curve is obtained. This method has reduced the number of design variables to only five and hence has gained an excellent computational efficiency. The method is applied to the design of a new wheel profile for Iranian north-eastern railway route. Comparative results obtained from a performance simulation show that the optimized profile is capable of reducing the wear index, and increasing the stability factors appreciably for a sample track conforming sharp curve conditions. Although the wear of wheel and rail is not solely due to the shape of the profiles, it is evident that geometry conformation of wheel and track constitutes a high priority in wear reduction. The method presented herein is simple and efficient, as well as flexible with regards to any limitations that may have to be imposed similar to what was described. The objective function is not limited to the one used here, but can easily be altered to include other criteria as well. Likewise, the method could be specialized to generate special profiles for minimum wear taking exhaustively the whole geometric design track load, car characteristics, and other factors for a particular section of any railway network.