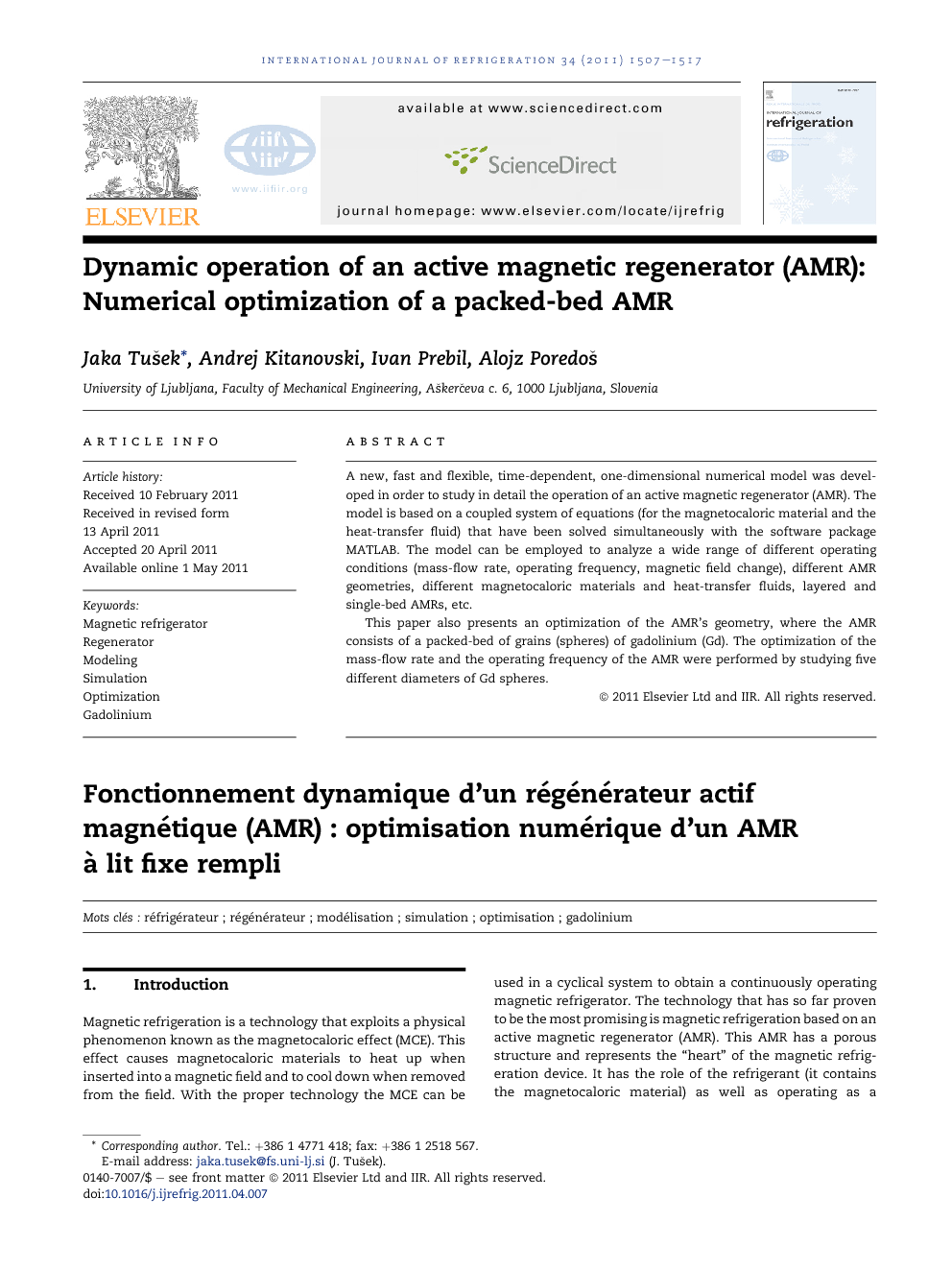 A new, fast and flexible, time-dependent, one-dimensional numerical model was developed in order to study in detail the operation of an active magnetic regenerator (AMR). The model is based on a coupled system of equations (for the magnetocaloric material and the heat-transfer fluid) that have been solved simultaneously with the software package MATLAB. The model can be employed to analyze a wide range of different operating conditions (mass-flow rate, operating frequency, magnetic field change), different AMR geometries, different magnetocaloric materials and heat-transfer fluids, layered and single-bed AMRs, etc. This paper also presents an optimization of the AMR’s geometry, where the AMR consists of a packed-bed of grains (spheres) of gadolinium (Gd). The optimization of the mass-flow rate and the operating frequency of the AMR were performed by studying five different diameters of Gd spheres

Magnetic refrigeration is a technology that exploits a physical phenomenon known as the magnetocaloric effect (MCE). This effect causes magnetocaloric materials to heat up when inserted into a magnetic field and to cool down when removed from the field. With the proper technology the MCE can be used in a cyclical system to obtain a continuously operating magnetic refrigerator. The technology that has so far proven to be the most promising is magnetic refrigeration based on an active magnetic regenerator (AMR). This AMR has a porous structure and represents the “heart” of the magnetic refrigeration device. It has the role of the refrigerant (it contains the magnetocaloric material) as well as operating as a regenerator. The heat regeneration between the particular phases of the cooling cycle leads to an increased temperature span. This is required because the magnetocaloric effect of current magnetocaloric materials is severely limited by the temperature interval in which a large magnetocaloric effect occurs. The AMR usually performs an inverse (left thermodynamic) Brayton refrigeration cycle (at each differential point along its length) and thus has the following four phases: 1) adiabatic magnetization, 2) isofield heat-transfer (fluid flow from the cold to the hot external heat exchanger), 3) adiabatic demagnetization, and 4) isofield heat-transfer (fluid flow from the hot to the cold external heat exchanger). In order to understand the operation of the AMR in detail, a number of AMR numerical models have been developed so far. These relate to 1D models which assume that the fluid flow and the thermal conduction (if it is included) occur only in the downstream fluid direction (Smaili and Chahine, 1998, Siddikov et al., 2005, Shir et al., 2005, Engelbrecht et al., 2005, Kawanami, 2007, Šarlah, 2008 and Bouchekara et al., 2008 and Tagliafico et al., 2009). In general, 1D models neglect the intra-particle thermal conduction and require the application of a heat-transfer coefficient between the fluid and the solid matrix. Recently, 2D models of the AMR were developed by Petersen et al., 2008, Nielsen et al., 2009 and Oliviera et al., 2009 and Liu and Yu (2011). They took into account the 2D velocity field, which is established in the downstream direction of the fluid flow. In general, they also considered the thermal conduction in 2D (perpendicular and parallel to the fluid flow). Equations for the fluid and the solid matrix in 2D models are not directly coupled through the heat-transfer coefficient, but are connected through an additional boundary condition that defines the thermal contact between the fluid and the solid. This is physically more appropriate than the use of the heat-transfer coefficient. This is particularly so because in this case the result does not depend on the accuracy of the correlation for the heat-transfer coefficient. However, due to a random particle distribution in the packed-bed of the AMR, 2D models can only be applied for AMRs with ordered structures (flat parallel plates, square channel, etc.). In general, a fully developed 3D model could be applied to any geometry. The first attempt of the 3D AMR model is presented in Bouchard et al. (2009). Models can be further distinguished with regard to the inclusion of the magnetocaloric effect. Some authors applied an adiabatic temperature change (ΔTad (T,Bi,Bfin)) of the magnetocaloric material during the process of magnetization and demagnetization. Another possibility is to include the magnetocaloric effect directly into the mathematical model through (∂M/∂T), as presented by Shir et al. (2005), or through (∂s/∂μ0H), as presented by Engelbrecht et al. (2005). A detailed review of all the so far published AMR numerical models is presented in Nielsen et al. (2011).