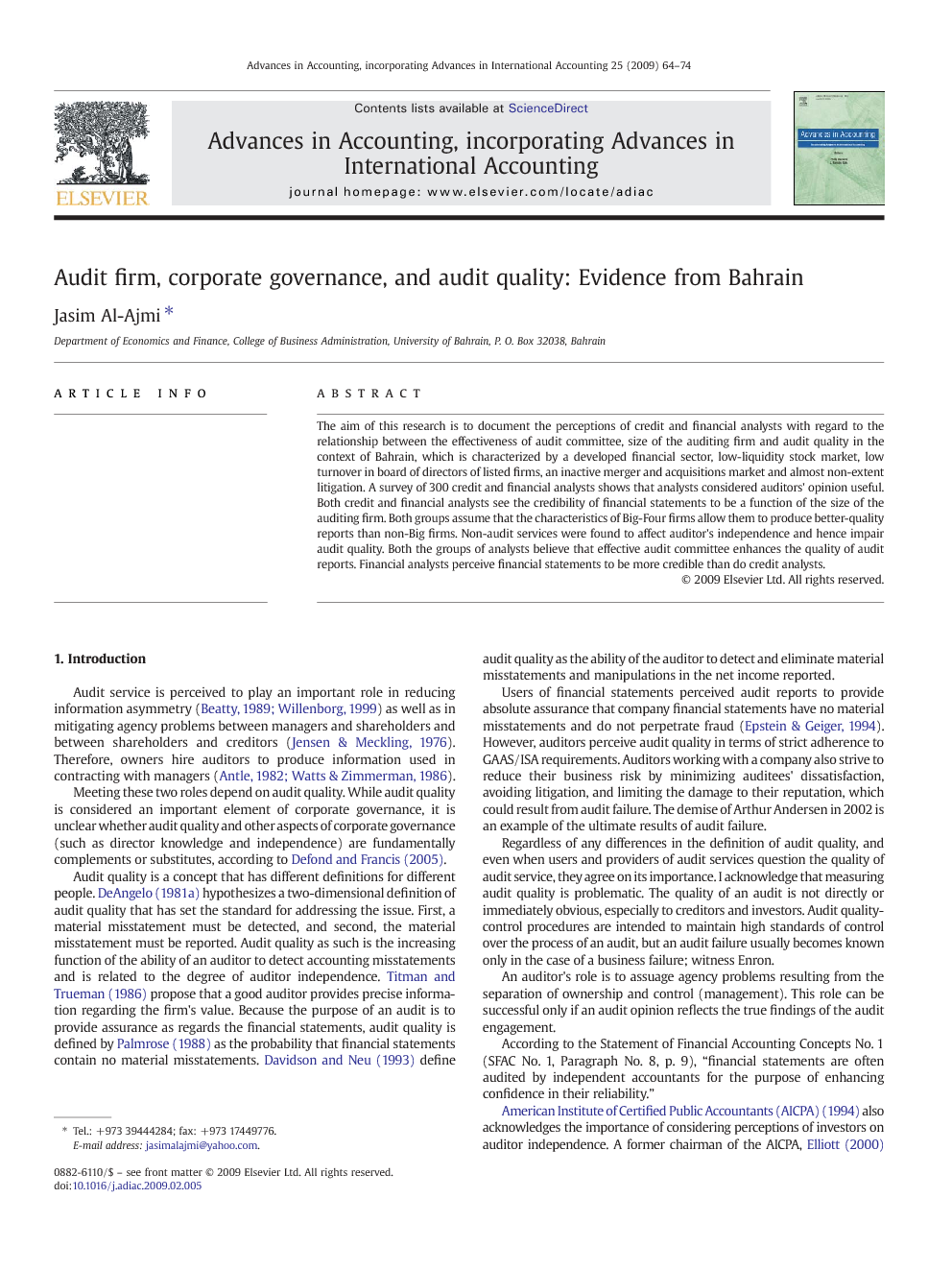 The aim of this research is to document the perceptions of credit and financial analysts with regard to the relationship between the effectiveness of audit committee, size of the auditing firm and audit quality in the context of Bahrain, which is characterized by a developed financial sector, low-liquidity stock market, low turnover in board of directors of listed firms, an inactive merger and acquisitions market and almost non-extent litigation. A survey of 300 credit and financial analysts shows that analysts considered auditors' opinion useful. Both credit and financial analysts see the credibility of financial statements to be a function of the size of the auditing firm. Both groups assume that the characteristics of Big-Four firms allow them to produce better-quality reports than non-Big firms. Non-audit services were found to affect auditor's independence and hence impair audit quality. Both the groups of analysts believe that effective audit committee enhances the quality of audit reports. Financial analysts perceive financial statements to be more credible than do credit analysts.

The author has reported the results of a survey of credit and financial analysts on perceptions of audit quality and the factors that determine that quality. Consistent with the evidence in developed markets, the bigger auditing firms are perceived to provide better quality audits and to be more independent of the management of companies they audit compared with smaller firms. Findings are similar in both the questionnaires and personal interviews. The conclusion is that the Big Four auditing firms have characteristics that place them in a better position to produce better quality audits than smaller firms. A review of the 2007 annual reports of 41 companies listed on the Bahrain Stock Exchange shows that 82.5% of the companies are audited by one of the Big Four. The author's interviews indicate that the Big Four auditors are better able to resist management pressure in cases of conflict. Their greater resources, technical knowledge, and global reach allow them to deal with clients more objectively without a fear of termination. Financial analysts rely more on the audited financial statements than credit analysts. This is likely because a bank–client relationship allows credit analysts to obtain more information from their clients; they are also in a better position to evaluate the financial position of their borrowers than financial analysts. Both groups of analysts think that provision of non-audit services will negatively affect auditor's independence and ultimately impair the quality of an audit. An effective audit committee is seen as one factor that should improve the credibility of financial statements. Regression results indicate that both groups of analysts perceive financial statements audited by Big-Four firms to be of better quality than those audited by non-Big firms. This is because of the characteristic of Big Four firms, which are not matched by other audit firms. This is an evidence supporting CBB's current policy that audit of retail and wholesale banks and large investment companies should be performed by Big-Four firms. Furthermore, credit analysts have found that the creditability of an audit report by one of the Big Four is determined by professional audit expertise, wide range of skills, reputation, and accounting-and-auditing knowledge. However, for financial analysts, the credibility of these reports is a function of professional audit expertise, real value for fees, wide range of skills, ethical standards, and accounting-and-auditing knowledge. Future research may be directed toward determining the effect of the actual role of an audit committee on audit quality. This can be carried out when companies start establishing such committees and ensure that they act in an independent and effective manner. This is likely to take place when Bahrain issues its corporate governance code.