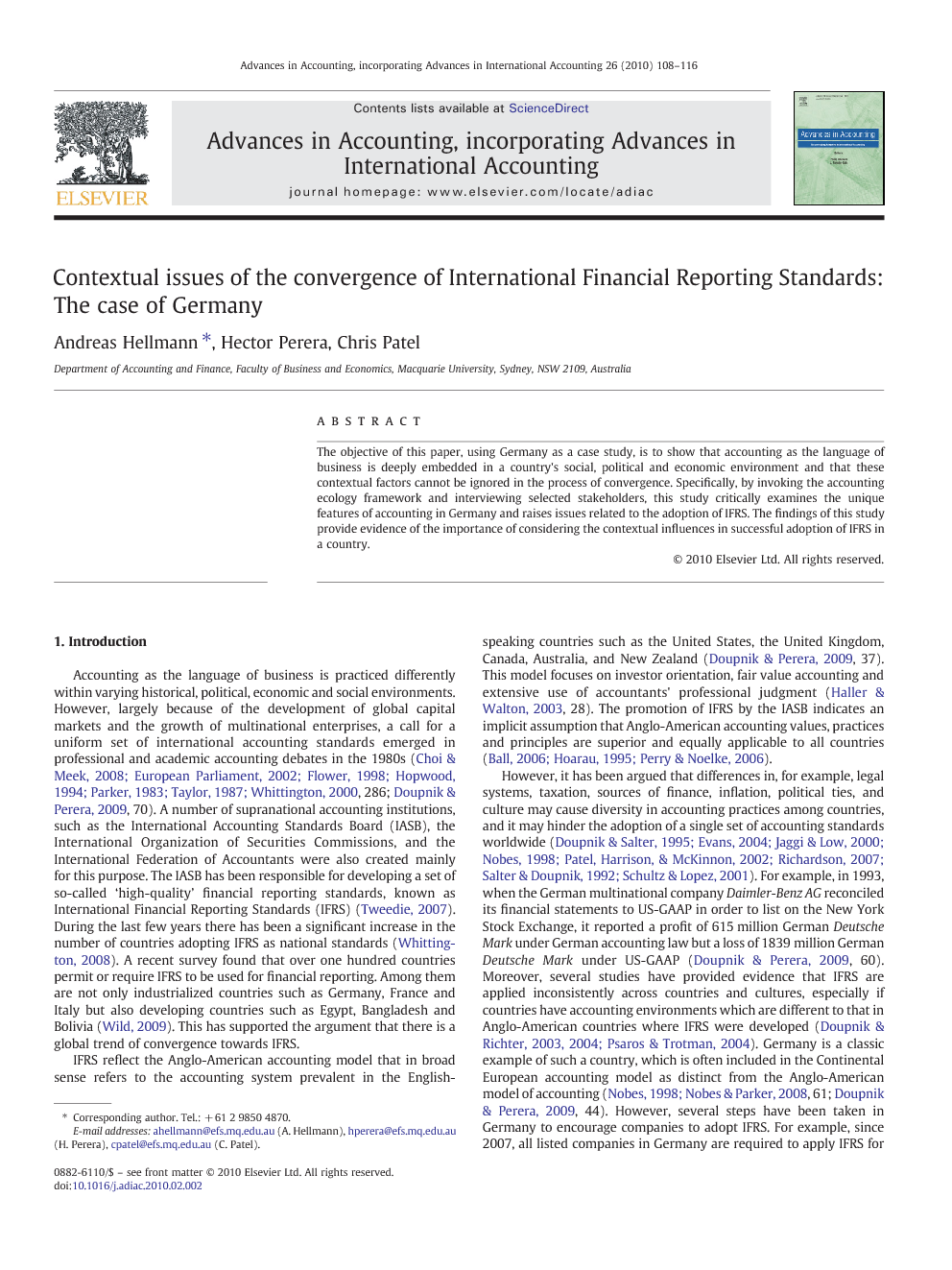 The objective of this paper, using Germany as a case study, is to show that accounting as the language of business is deeply embedded in a country's social, political and economic environment and that these contextual factors cannot be ignored in the process of convergence. Specifically, by invoking the accounting ecology framework and interviewing selected stakeholders, this study critically examines the unique features of accounting in Germany and raises issues related to the adoption of IFRS. The findings of this study provide evidence of the importance of considering the contextual influences in successful adoption of IFRS in a country.

Accounting as the language of business is practiced differently within varying historical, political, economic and social environments. However, largely because of the development of global capital markets and the growth of multinational enterprises, a call for a uniform set of international accounting standards emerged in professional and academic accounting debates in the 1980s (Choi and Meek, 2008, European Parliament, 2002, Flower, 1998, Hopwood, 1994, Parker, 1983, Taylor, 1987 and Whittington, 2000, 286; Doupnik & Perera, 2009, 70). A number of supranational accounting institutions, such as the International Accounting Standards Board (IASB), the International Organization of Securities Commissions, and the International Federation of Accountants were also created mainly for this purpose. The IASB has been responsible for developing a set of so-called ‘high-quality’ financial reporting standards, known as International Financial Reporting Standards (IFRS) (Tweedie, 2007). During the last few years there has been a significant increase in the number of countries adopting IFRS as national standards (Whittington, 2008). A recent survey found that over one hundred countries permit or require IFRS to be used for financial reporting. Among them are not only industrialized countries such as Germany, France and Italy but also developing countries such as Egypt, Bangladesh and Bolivia (Wild, 2009). This has supported the argument that there is a global trend of convergence towards IFRS. IFRS reflect the Anglo-American accounting model that in broad sense refers to the accounting system prevalent in the English-speaking countries such as the United States, the United Kingdom, Canada, Australia, and New Zealand (Doupnik & Perera, 2009, 37). This model focuses on investor orientation, fair value accounting and extensive use of accountants' professional judgment (Haller & Walton, 2003, 28). The promotion of IFRS by the IASB indicates an implicit assumption that Anglo-American accounting values, practices and principles are superior and equally applicable to all countries (Ball, 2006, Hoarau, 1995 and Perry and Noelke, 2006). However, it has been argued that differences in, for example, legal systems, taxation, sources of finance, inflation, political ties, and culture may cause diversity in accounting practices among countries, and it may hinder the adoption of a single set of accounting standards worldwide (Doupnik and Salter, 1995, Evans, 2004, Jaggi and Low, 2000, Nobes, 1998, Patel et al., 2002, Richardson, 2007, Salter and Doupnik, 1992 and Schultz and Lopez, 2001). For example, in 1993, when the German multinational company Daimler-Benz AG reconciled its financial statements to US-GAAP in order to list on the New York Stock Exchange, it reported a profit of 615 million German Deutsche Mark under German accounting law but a loss of 1839 million German Deutsche Mark under US-GAAP (Doupnik & Perera, 2009, 60). Moreover, several studies have provided evidence that IFRS are applied inconsistently across countries and cultures, especially if countries have accounting environments which are different to that in Anglo-American countries where IFRS were developed ( Doupnik and Richter, 2003, Doupnik and Richter, 2004 and Psaros and Trotman, 2004). Germany is a classic example of such a country, which is often included in the Continental European accounting model as distinct from the Anglo-American model of accounting ( Nobes, 1998 and Nobes and Parker, 2008, 61; Doupnik & Perera, 2009, 44). However, several steps have been taken in Germany to encourage companies to adopt IFRS. For example, since 2007, all listed companies in Germany are required to apply IFRS for their consolidated financial statements without exception1. The German government also incorporated the permission of the EU to extend the application of IFRS for consolidated financial statements of non-listed companies. The culmination of these steps is the issuance in May 2009 of the Act to Modernize Accounting Law (Bilanzrechtsmodernisierungsgesetz; henceforth, BilMoG) (for details see Hellmann, Perera, & Patel, 2009). Using the accounting ecology framework developed by Gernon and Wallace (1995), this paper provides a rigorous and systematic analysis of the main features of Germany's accounting environment. In addition, the paper examines potential issues associated with convergence in Germany by interviewing selected key stakeholders, such as accounting academics, professional auditors, and persons affiliated with the German Accounting Standards Board (GASB), the German Financial Reporting Enforcement Panel (GFREP), and the German Federal Ministry of Justice. The main objective of this paper is to show that accounting as the language of business is deeply embedded in a country's social, political and economic environment and that the influence of these contextual factors cannot be ignored in the process of convergence.

Using the accounting ecology framework developed by Gernon and Wallace (1995), this paper has examined the main features of the German accounting environment. Accounting rules and regulation in Germany are codified and increasingly determined by EU legislation. The value orientation of Germans, which largely favor uniformity and statutory control rather than flexibility in application of accounting standards and extensive use of accountants' professional judgment, is embedded in the HGB. It appears that Anglo-American accounting practices in general and IFRS in particular remain controversial in Germany, as there are various interest groups who debate and attempt to influence the public opinion in favor of as well as against IFRS. Capital markets in Germany have gained more importance in recent years. However, the number of listed companies is still low compared to Anglo-American countries. As a result, the HGB and its underlying principles still remains the basis for accounting for German companies. Unlike the practice in Anglo-American countries, financial statements in Germany can be prepared by accountants who may not be affiliated with a professional organization. This is likely to cause issues of consistency in the application of IFRS. Findings of the interviews also suggest that certain characteristics of the German accounting environment may cause problems concerning the consistent application of IFRS and may hinder the comparability of financial statements across countries. The main problems that have been identified include the endorsement process, translation of IFRS into German, interpretation of IFRS by Germans, cost of IFRS implementation, a lack of qualified accountants and inconsistent education and training, lobbying activities, and the enforcement of IFRS. The endorsement process is creating EU-IFRS which may be different to those issued by the IASB. Further, the time lag between the release of a standard and its endorsement may hinder the comparability of financial statements across countries as many companies will not apply the issued standard before endorsement while some others may be using it already as a guideline. The German translation of IFRS is often criticized for being vague and may be interpreted in a number of ways. In order to facilitate convergence and the consistent application of IFRS in Germany, our interviewees suggest that attention needs to be directed towards a high-quality translation from English into German. Moreover, an adequate supply of qualified and trained accountants and auditors is necessary in order to apply IFRS. In Germany however, there is a relatively small auditing profession which must be able to apply two different accounting systems, namely IFRS-based financial statements for consolidated financial reports and individual financial statements following HGB for taxation and other purposes. Further, this requirement is a financial burden especially for small and medium-sized companies. Our analysis shows that German accountants may face problems in interpreting and applying IFRS consistently if they lack relevant education and training. Despite the legal requirement to prepare IFRS-based consolidated financial statements, it would be important that the different reasoning and accounting models behind IFRS and HGB are addressed in the curriculum. This paper provides valuable insights into the context in which accounting operates in Germany. Although each country has a unique accounting environment, it is likely that countries implementing IFRS may face similar issues and problems to varying degrees. Finally, if Germany wants to take advantage of being part of the global capital market, and German companies want to raise funds internationally, they may have to find ways to overcome some of the potential issues discussed in this paper. Perhaps this would be another area where accounting can be used to achieve economic objectives of a country. The findings of this study may be of interest to international accounting researchers, professional bodies, standard setters, enforcement bodies, and multinational corporations not only in Germany but also in other countries which have adopted or plan to adopt IFRS in the future.