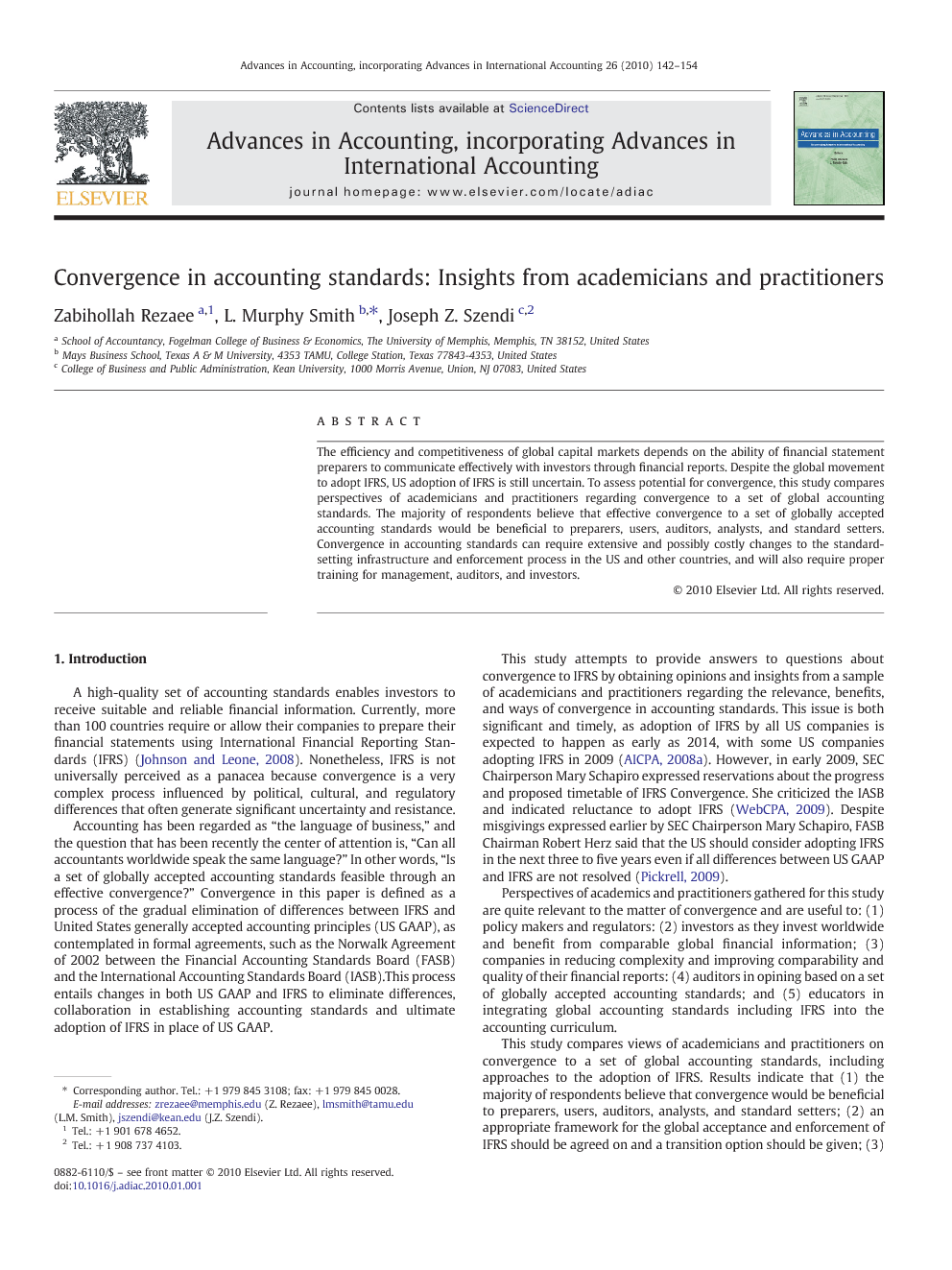 The efficiency and competitiveness of global capital markets depends on the ability of financial statement preparers to communicate effectively with investors through financial reports. Despite the global movement to adopt IFRS, US adoption of IFRS is still uncertain. To assess potential for convergence, this study compares perspectives of academicians and practitioners regarding convergence to a set of global accounting standards. The majority of respondents believe that effective convergence to a set of globally accepted accounting standards would be beneficial to preparers, users, auditors, analysts, and standard setters. Convergence in accounting standards can require extensive and possibly costly changes to the standard-setting infrastructure and enforcement process in the US and other countries, and will also require proper training for management, auditors, and investors.

A high-quality set of accounting standards enables investors to receive suitable and reliable financial information. Currently, more than 100 countries require or allow their companies to prepare their financial statements using International Financial Reporting Standards (IFRS) (Johnson and Leone, 2008). Nonetheless, IFRS is not universally perceived as a panacea because convergence is a very complex process influenced by political, cultural, and regulatory differences that often generate significant uncertainty and resistance. Accounting has been regarded as “the language of business,” and the question that has been recently the center of attention is, “Can all accountants worldwide speak the same language?” In other words, “Is a set of globally accepted accounting standards feasible through an effective convergence?” Convergence in this paper is defined as a process of the gradual elimination of differences between IFRS and United States generally accepted accounting principles (US GAAP), as contemplated in formal agreements, such as the Norwalk Agreement of 2002 between the Financial Accounting Standards Board (FASB) and the International Accounting Standards Board (IASB).This process entails changes in both US GAAP and IFRS to eliminate differences, collaboration in establishing accounting standards and ultimate adoption of IFRS in place of US GAAP. This study attempts to provide answers to questions about convergence to IFRS by obtaining opinions and insights from a sample of academicians and practitioners regarding the relevance, benefits, and ways of convergence in accounting standards. This issue is both significant and timely, as adoption of IFRS by all US companies is expected to happen as early as 2014, with some US companies adopting IFRS in 2009 (AICPA, 2008a). However, in early 2009, SEC Chairperson Mary Schapiro expressed reservations about the progress and proposed timetable of IFRS Convergence. She criticized the IASB and indicated reluctance to adopt IFRS (WebCPA, 2009). Despite misgivings expressed earlier by SEC Chairperson Mary Schapiro, FASB Chairman Robert Herz said that the US should consider adopting IFRS in the next three to five years even if all differences between US GAAP and IFRS are not resolved (Pickrell, 2009). Perspectives of academics and practitioners gathered for this study are quite relevant to the matter of convergence and are useful to: (1) policy makers and regulators: (2) investors as they invest worldwide and benefit from comparable global financial information; (3) companies in reducing complexity and improving comparability and quality of their financial reports: (4) auditors in opining based on a set of globally accepted accounting standards; and (5) educators in integrating global accounting standards including IFRS into the accounting curriculum. This study compares views of academicians and practitioners on convergence to a set of global accounting standards, including approaches to the adoption of IFRS. Results indicate that (1) the majority of respondents believe that convergence would be beneficial to preparers, users, auditors, analysts, and standard setters; (2) an appropriate framework for the global acceptance and enforcement of IFRS should be agreed on and a transition option should be given; (3) convergence to IFRS can improve cross-border integration of capital markets, create uniformity in global financial reporting, minimize barriers to global competition for capital, increase global comparability, and promote a more informed global marketplace; (4) lack of uniformity in the application of IFRS in all jurisdictions, lack of coverage of IFRS in financial accounting textbooks, coordination and collaboration among global regulators, required changes in regulatory regime, and initial cost of convergence should be addressed; and (5) a proper plan to transition all US companies to IFRS requires IFRS training for management, auditors, and investors and IFRS education in the accounting curriculum. These results can be insightful to companies worldwide that plan to adopt IFRS for their financial reporting, as well as regulators and standard setters in promoting convergence.

Global comparability in financial reporting can only be achieved through the use of a single set of high-quality global accounting standards. Complete convergence between US GAAP and IFRS contributes to the achievement of global comparability. There are many unresolved issues of an ultimate move toward convergence. IFRS, regarded as principles-based standards, have received global acceptance and have been used by many countries, and are being considered by US companies, investors, regulators, and auditors. Recent initiatives by the SEC in eliminating reconciliation for foreign companies and possibly even allowing US companies to report using IFRS are positive steps toward convergence and pave the way for the development of one global financial reporting language. We examined three research questions, the first concerning whether practitioners and academicians have different perspectives regarding the severity of consequences of IFRS convergence. The second concerned whether those who are more familiar with IFRS are more likely to believe that convergence will have more severe consequences than those who are not familiar. The third concerned whether those who think that IFRS convergence will occur sooner, rather than later, believe that convergence will have more severe consequences. Results were mixed. Significant differences between practitioners and academicians were found on nine survey questions; between those familiar and not familiar with IFRS on 18 survey questions; and between those who believe convergence will occur sooner and later on just three survey questions. Opinions regarding the key issues of convergence are diverse. Respondents, both academic and practitioner, overall believe that: (1) effective convergence to a set of globally accepted accounting standards would be beneficial to preparers, users, auditors, analysts, and standard setters; (2) an appropriate framework for the global acceptance and enforcement of IFRS should be agreed on, offering optional transition; and (3) a proper plan to convert all US companies to IFRS requires related training for management, auditors, and investors, along with IFRS education incorporated into accounting curriculum. Comparability of financial reporting under IFRS is the key principle of moving toward a single set of standards. Convergence to IFRS is expected to improve the comparability of financial reports and thus benefit global investors. It is expected that the global financial reporting process will eventually be based on a single set of high-quality accounting standards as issued by the IASB. The efficiency and competitiveness of global capital markets depend on the ability of financial statement preparers to effectively communicate with investors through financial reports. This effective communication can be strengthened through convergence to IFRS.