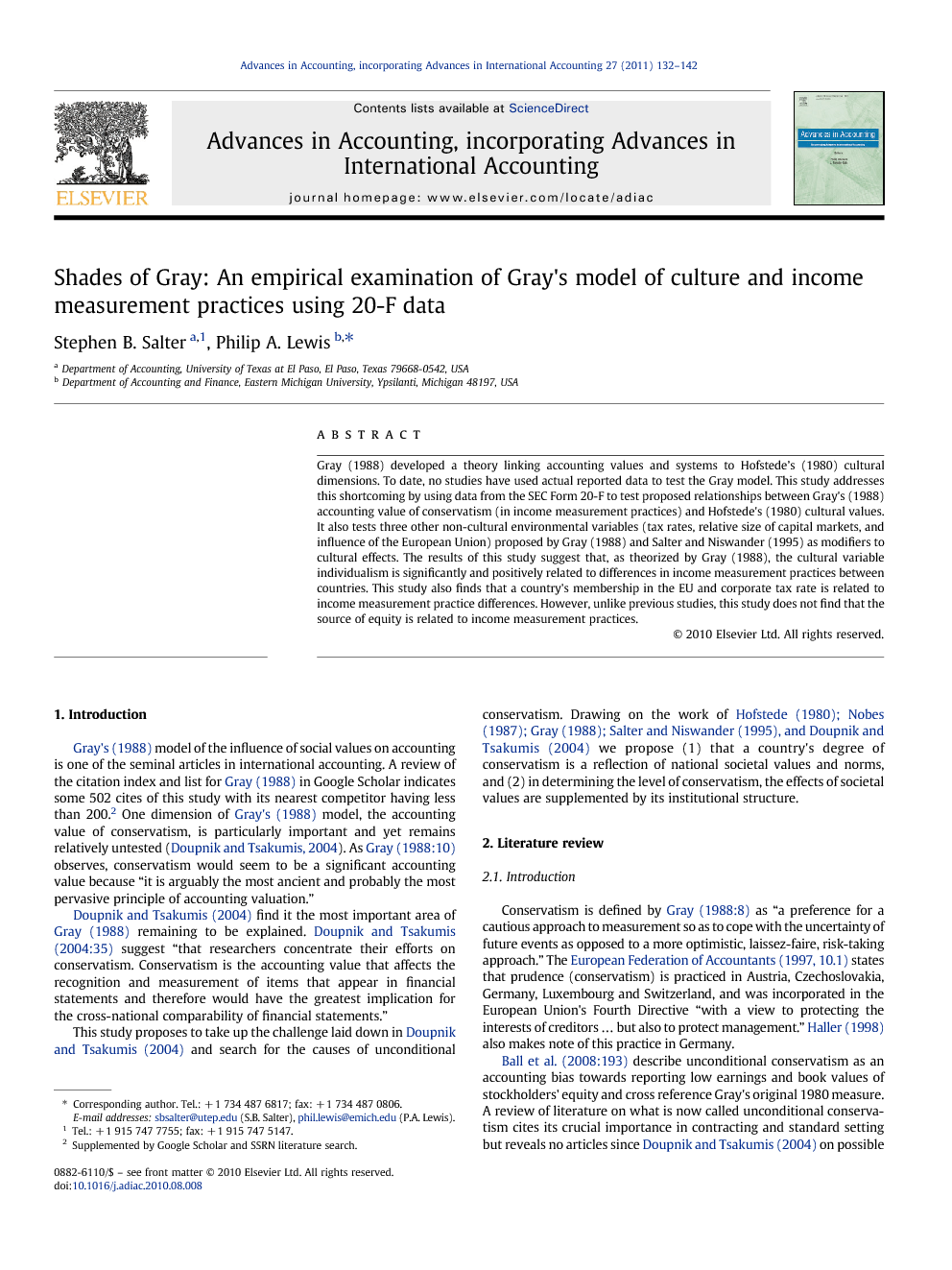 Gray (1988) developed a theory linking accounting values and systems to Hofstede’s (1980) cultural dimensions. To date, no studies have used actual reported data to test the Gray model. This study addresses this shortcoming by using data from the SEC Form 20-F to test proposed relationships between Gray's (1988) accounting value of conservatism (in income measurement practices) and Hofstede's (1980) cultural values. It also tests three other non-cultural environmental variables (tax rates, relative size of capital markets, and influence of the European Union) proposed by Gray (1988) and Salter and Niswander (1995) as modifiers to cultural effects. The results of this study suggest that, as theorized by Gray (1988), the cultural variable individualism is significantly and positively related to differences in income measurement practices between countries. This study also finds that a country's membership in the EU and corporate tax rate is related to income measurement practice differences. However, unlike previous studies, this study does not find that the source of equity is related to income measurement practices.

Gray's (1988) model of the influence of social values on accounting is one of the seminal articles in international accounting. A review of the citation index and list for Gray (1988) in Google Scholar indicates some 502 cites of this study with its nearest competitor having less than 200.2 One dimension of Gray's (1988) model, the accounting value of conservatism, is particularly important and yet remains relatively untested (Doupnik and Tsakumis, 2004). As Gray (1988:10) observes, conservatism would seem to be a significant accounting value because “it is arguably the most ancient and probably the most pervasive principle of accounting valuation.” Doupnik and Tsakumis (2004) find it the most important area of Gray (1988) remaining to be explained. Doupnik and Tsakumis (2004:35) suggest “that researchers concentrate their efforts on conservatism. Conservatism is the accounting value that affects the recognition and measurement of items that appear in financial statements and therefore would have the greatest implication for the cross-national comparability of financial statements.” This study proposes to take up the challenge laid down in Doupnik and Tsakumis (2004) and search for the causes of unconditional conservatism. Drawing on the work of Hofstede, 1980, Nobes, 1987, Gray, 1988, Salter & Niswander, 1995 and Doupnik & Tsakumis, 2004 we propose (1) that a country's degree of conservatism is a reflection of national societal values and norms, and (2) in determining the level of conservatism, the effects of societal values are supplemented by its institutional structure