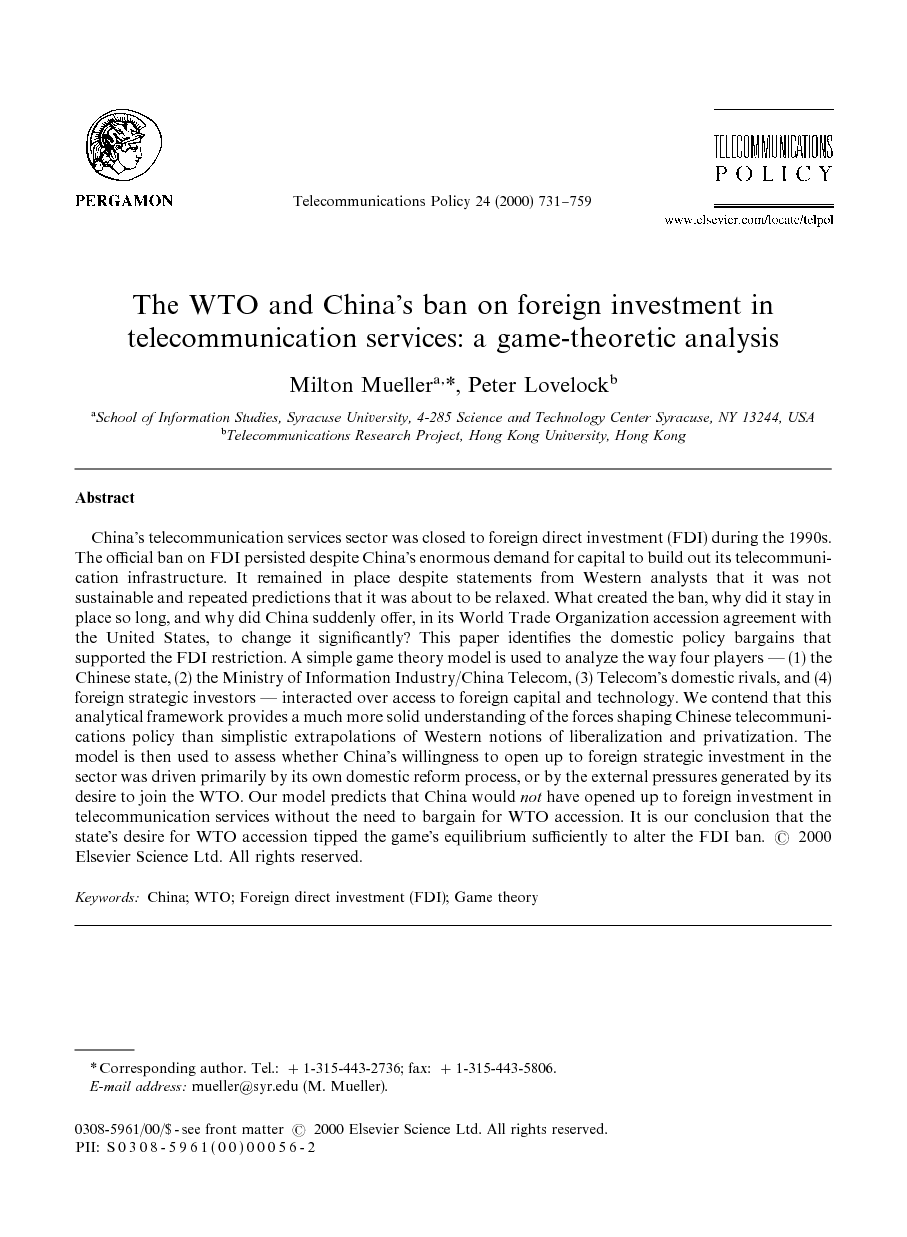 China's telecommunication services sector was closed to foreign direct investment (FDI) during the 1990s. The official ban on FDI persisted despite China's enormous demand for capital to build out its telecommunication infrastructure. It remained in place despite statements from Western analysts that it was not sustainable and repeated predictions that it was about to be relaxed. What created the ban, why did it stay in place so long, and why did China suddenly offer, in its World Trade Organization accession agreement with the United States, to change it significantly? This paper identifies the domestic policy bargains that supported the FDI restriction. A simple game theory model is used to analyze the way four players — (1) the Chinese state, (2) the Ministry of Information Industry/China Telecom, (3) Telecom's domestic rivals, and (4) foreign strategic investors — interacted over access to foreign capital and technology. We contend that this analytical framework provides a much more solid understanding of the forces shaping Chinese telecommunications policy than simplistic extrapolations of Western notions of liberalization and privatization. The model is then used to assess whether China's willingness to open up to foreign strategic investment in the sector was driven primarily by its own domestic reform process, or by the external pressures generated by its desire to join the WTO. Our model predicts that China would not have opened up to foreign investment in telecommunication services without the need to bargain for WTO accession. It is our conclusion that the state's desire for WTO accession tipped the game's equilibrium sufficiently to alter the FDI ban.

During the 1990s, China came to be seen as an especially attractive site for foreign direct investment (FDI). The vast potential of the “China market”, China's low labor costs, favorable tax policies, and the stability of its business climate relative to other developing countries stimulated a gigantic global reallocation of capital and labor resources. More than US$200 billion in FDI flowed into mainland China from 1990 to 1997, accounting for 30% of the total foreign direct investment sent to all the world's developing economies during that period (China State Statistical Bureau, 1998).1 China is now building what will inevitably become the world's largest telecommunications network. The Chinese leadership has made no secret of its belief in the importance of information and telecommunication products and services to China's economic aspirations.2 To develop its infrastructure, China must invest large amounts of capital and harness new levels of managerial and technological know-how. Nevertheless, during the whole of the 1990s China imposed some of the world's tightest restrictions on foreign investment in telecommunication services. Foreign businesses were not allowed to own, operate, or manage telecommunication networks or services in China. China's rejection of FDI in telecommunication services was unusual relative to other economic sectors in China or to other countries at a similar level of development. In telecommunications equipment manufacturing, equity joint ventures and wholly foreign-owned enterprises were commonplace in China, and took in billions of US dollars early in the reform process.3 Other developing nations in Latin America and Asia opened their doors to foreign direct investment in telecommunication services during the decade.4 Evidently, despite its need to invest in a large-scale service infrastructure and the ready availability of capital from foreign sources, China was willing to forego what seems like a natural trade — resources for market access — in order to achieve other objectives. China's closed door in services played a major role in its negotiations to enter the World Trade Organization (WTO). The United States, the European Commission and Japan all made opening up telecommunication services a major point of contention (Lardy (1999a) and Dow Jones International News, 1999a, b).5 The FDI restriction in telecommunications attracted significant attention from businesses and investment analysts eager to enter the China market. But almost all of the analysis has been devoted to guessing when or how it will change; there is surprisingly little analysis of why it was there and what domestic political and economic bargains sustain it. In our opinion, it is necessary to understand what created and sustained the FDI restriction before one can understand what is changing and why. In particular, it is impossible to assess the impact of the WTO negotiations on China's policy without understanding how the external pressures imposed by WTO bargaining interact with the pre-existing domestic policy bargains. Domestic constraints on policymakers depend not only on group calculations of interests, but on their political influence. Therefore, “what counts [domestically] is not total national costs and benefits, but their incidence, relative to existing coalitions and proto-coalitions.” (Putnam, 1988, p. 451). From this perspective, international telecommunications actors needed to do more than explain why telecommunications reform and liberalization in China is in China's ‘national interest’ if they wanted to be effective in challenging the restrictions that existed on foreign participation. They needed to understand and challenge the strategic interactions between certain key players in China's policy environment. In the following paper, we investigate the domestic policy considerations that supported the FDI restriction. A simple game-theoretic model is used to analyze the interactions. The main objective of the model is to aid in assessing whether China's willingness to open up to foreign trade and investment in the sector was driven primarily by its own domestic reform process, or by the external pressures generated by its desire to join the WTO. We entered into this exercise firmly believing that domestic policy bargains would be sufficient to explain China's policy toward FDI in telecommunication services, and that the WTO process would have a secondary significance. To our surprise, the model we developed suggests that the external pressures associated with WTO accession may have played a bigger role in the process of opening China's telecommunications sector than we thought. We begin by verbally describing three distinct “games” or bargaining arenas in which negotiations over FDI take place. We then focus on what we consider to be the most central of those arenas: the interactions between Chinese service providers, the government, and foreign strategic investors over participation in China's domestic telecommunication services sector. We identify four distinct players in the Chinese environment: the State, the China Telecom interests, the domestic rivals of China Telecom, and foreign strategic investors. Finally, we describe verbally the interests of each player, and translate those interests into a formal definition of strategies and an assessment of each player's payoffs. We conclude by examining the results of the game model using various assumptions. The use of game theory is intended to provide a more robust understanding of the social forces underpinning the FDI restriction. Game theory sets out to address the question: How should individual actors pursue their interests when each realizes that the consequences of their individual acts will depend (in part) on what other independent actors do. How, in other words, does an actor best pursue its own objectives, whatever they might be, in an interdependent milieu? Game theory formalizes this question by positing actors and endowing them with moves, specifying what information is available to each actor at each point at which they may be called upon to move, assigning payoffs to the ways all actors’ moves can be combined to play the game, and then investigating the kinds of conduct that might plausibly arise.

As we have seen, flawed assumptions have framed earlier analyses of China's telecommunications policy developments. China has been grouped with other developing countries and therefore has been expected to move along a similar reform path, opening the services industry to foreign investment and competition. And yet, they did not all throughout the 1990s. Further defying the expectations of Western observers, China has pursued the world's largest and fastest build-out of a communications network while simultaneously maintaining one of the more restrictive policies on foreign investment. Moreover, the state has done this whilst stepping back from shouldering the national infrastructure investment burden. To understand these apparent contradictions and to determine where the impetus for the sustained ban on foreign participation in the sector lies, we have employed a game theoretic model. The formal game theory model serves to illustrate important facets of China's policy-making process. The restriction on FDI is the product of a coalition between the state and China Telecom. In essence, China Telecom was protected from foreign-financed competition in exchange for serving as an instrument of national development. For most of the 1990s, the state had reason to believe that the payoffs it derived from this strategy were growing. The strategy of corporatizing parts of the MII/MPT, injecting assets into it, and listing the corporation in overseas stock markets was the perfect mechanism for gaining access to capital inputs without relinquishing management control. Indeed, the closure of the services sector greatly enhanced the share value of China Telecom to foreigners, because as long as the market was closed, holding shares in China Telecom is the only way foreigners could profit from the growth of the sector. The state also hoped that protection, combined with some domestic competition, would help promote a national champion in information and communication industries. China's approach to competition followed similar lines. A favored state corporation, Unicom, was created, and it too exploited foreigners’ willingness to invest in China without offering any real equity or management control. But the interests of the state and China Telecom are not identical. The state has interests in reform and efficiency and uses domestic competitors to pressure the sector in those directions. The state is also subjected to intense lobbying from ministries besides MII that want to enter the industry. It is the dependence of domestic competitors on foreign capital investment that poses the most difficult choices for the state. The state must stay in control of the relationships between domestic competitors and their foreign investors, and between the same domestic competitors and China Telecom. Opening to foreign investment too wide, too fast shifts the balance in a way that threatens both the viability of the domestic competitors and the special role of China Telecom. Formally modeling these relationships makes it clearer how foreigners influence policy and altered the state's opposition to foreign participation. If foreigners could mount a credible threat to severely limit capital and technology inputs into the Chinese telecommunications market, the state's calculus in favor of FDI restrictions can be altered. Also, the linking of foreign investment in telecommunications to other things China wants, such as WTO accession and its associated trade preferences, may have been enough to tip the scales in favor of opening up. Such evidence suggests that the prospects for policy influence, and for WTO accession can be quite strong if proposals are based on an understanding of various players’ bargaining strength in the domestic arena. Prime Minister Zhu's dramatic WTO offer to the US in telecommunication services (and the criticism it received from some quarters in China) indicates that the external pressures of WTO accession had a direct impact on domestic policy. Finally, it needs to be borne in mind that the analysis we provide is for one level of the game only — the domestic arena. While we believe this to be fundamental level in understanding the FDI ban, a comprehensive analysis of the role of foreign investment in China's telecommunication sector would need to encompass all three bargaining arenas described at the outset. Policy making in China is a multi-level game and actors can use their position at different levels to influence the game in different ways. A complete analysis requires each game to be studied and then tied in together. We believe that the current paper points to a fruitful path of future analysis of the evolution of China's telecommunication sector.