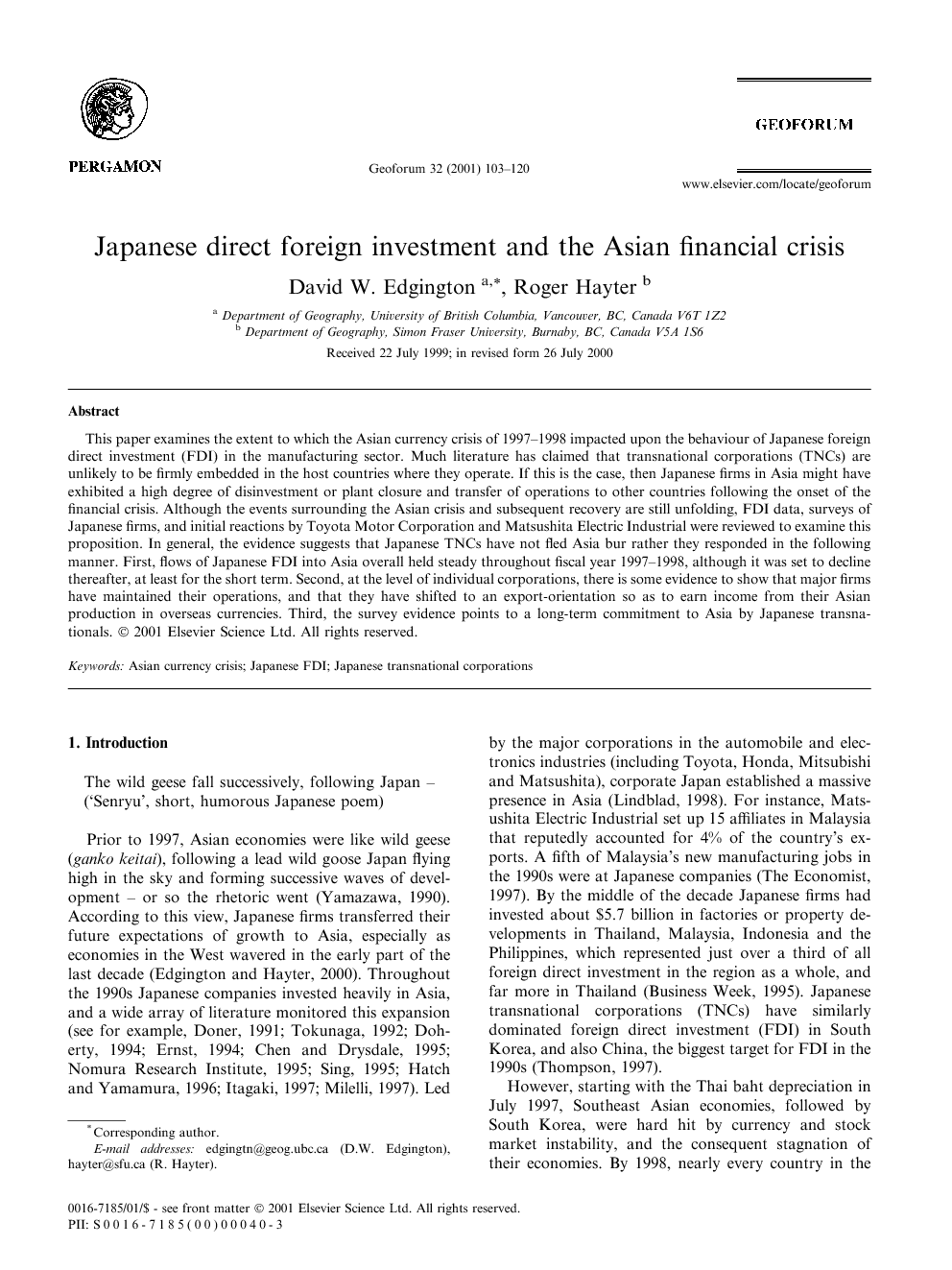 This paper examines the extent to which the Asian currency crisis of 1997–1998 impacted upon the behaviour of Japanese foreign direct investment (FDI) in the manufacturing sector. Much literature has claimed that transnational corporations (TNCs) are unlikely to be firmly embedded in the host countries where they operate. If this is the case, then Japanese firms in Asia might have exhibited a high degree of disinvestment or plant closure and transfer of operations to other countries following the onset of the financial crisis. Although the events surrounding the Asian crisis and subsequent recovery are still unfolding, FDI data, surveys of Japanese firms, and initial reactions by Toyota Motor Corporation and Matsushita Electric Industrial were reviewed to examine this proposition. In general, the evidence suggests that Japanese TNCs have not fled Asia bur rather they responded in the following manner. First, flows of Japanese FDI into Asia overall held steady throughout fiscal year 1997–1998, although it was set to decline thereafter, at least for the short term. Second, at the level of individual corporations, there is some evidence to show that major firms have maintained their operations, and that they have shifted to an export-orientation so as to earn income from their Asian production in overseas currencies. Third, the survey evidence points to a long-term commitment to Asia by Japanese transnationals.

The Asian economic crisis that started in 1997 was basically a financial phenomenon, but one that had deep-seated implications for Japanese manufacturing TNCs. The analysis of aggregate investment trends, surveys of corporate strategies, and case studies of individual companies indicated that the impact of the crisis on Japanese FDI has been multi-faceted. Thus, besides an initial increase of FDI into the region during fiscal year 1997, later results for fiscal year 1998 indicated a substantial drop in expected flows of inward direct investment to the region, in part due to the deteriorating economic situation in Japan itself.5 Nonetheless, despite the sudden drop in Japanese approved FDI during fiscal year 1998 this was ostensibly less than the damage sustained in sales and profit performance. In addition, the effects of the crisis certainly varied by host country and by industry. Yet the FDI analysis and more detailed case studies suggested that on the whole Japanese investors in the region avoided speculative M & A activity and that existing firms had a remarkable resilience to the crisis. Looking ahead, beyond the events of 1997–1998, there are a number of indications that Japanese manufacturers in general expect the long-term benefits of expanding in the region to outweigh the short-term risks indicated in Table 2, and that overall direct investment could return to pre-1997 levels within 5 years or so. Thus, in a 1998 UNCTAD/ICC survey, two-thirds of Japanese TNCs stated that their investment plans in the region remained unchanged, and almost one-fifth of them even intended to increase their investments despite the crisis (UNCTAD, 1998). The 1998 Japanese Ex-Im Bank survey mentioned earlier also sought to measure medium to long-term investment intentions in Asia. It found that between 44% (for firms in Indonesia) and 75% (Philippines) of Japanese TNCs in countries affected by the crisis expected to maintain or increase their FDI in the next one-to-three years. Declines were expected to be most pronounced in Indonesia (56%) and Thailand (53%) (see Fig. 3). But outside the next 3–5 years, the survey recorded that attitudes became even more positive over the prospects for sales and profits, and for FDI to return to 1997 levels, even among the most severely damaged countries such as Thailand, Indonesia and South Korea (Tejima, 1998). Beyond these optimistic evaluations a more sober assessment of Japanese FDI prospects in Asia would no doubt view depend upon a variety of factors. These include the speed of economic recovery, exchange-rate developments, and the success of switching from production for local markets to exports as well as from foreign sourcing to local sourcing of inputs (see Nishiyama and Noda, 1999). In general, these findings – especially the two case studies – support the views expressed by Cox, 1997a and Cox, 1997b, Dicken et al. (1994) and Hirst and Thompson (1992) concerning the embeddedness of TNCs in host countries and the relative stability of global production systems. The results also reflect the fact that Asia remains an attractive region, and one to which Japanese TNCs appeared committed. While some manufacturing firms will undoubtedly face a downturn in sales, few cases of dis-investment were noted in this study and Japanese managers in the automobile and electronics industries seemed responsive to changing environments and the opportunity to turn recent events to their advantage. Even so, the degree to which Japanese FDI is embedded in Asia, and the extent to which technology will be transferred, remains an issue. A final reflection is that the overall transnationalization of Japanese manufacturers has remained weak by the standards of other developed countries. Hence, immediately before the Asian crisis outward FDI stock (in 1996) was low as a percentage of GDP (about 10%), not only compared with most other developed countries but also with Asian countries. At that time, FDI outflows as a percentage of gross fixed capital formation was lower in Japan than in even countries such as Spain and Portugal (UNCTAD, 1998). When compared with the US and Germany, both of which begun their global operations earlier, Japan's ratio of overseas production is less than half (Ministry of International Trade and Industry, 1998). Accordingly, Japanese companies are likely to continue to establish international production systems in order to keep up with global competition. It is probable that they will meet this need by building on their existing foundations in Asia. This should not be surprising as FDI flows involve not only financial capital but also technological, managerial and intellectual capital that jointly represents a stock of assets for the production of goods and services (UNCTAD, 1999). Japanese TNCs typically forge long-term relationships at the level of production between headquaters and their foreign affiliates, reflecting the investor's lasting interest in these affiliates and control over them. Since FDI is mainly a real investment in firms, its mobility is significantly limited by such factors as physical assets, networks of suppliers, the local infrastructure, human capital and the institutional environment. In other words, Japanese firms have become embedded in Asia and so their FDI stocks are generally not so footloose as portfolio investments.