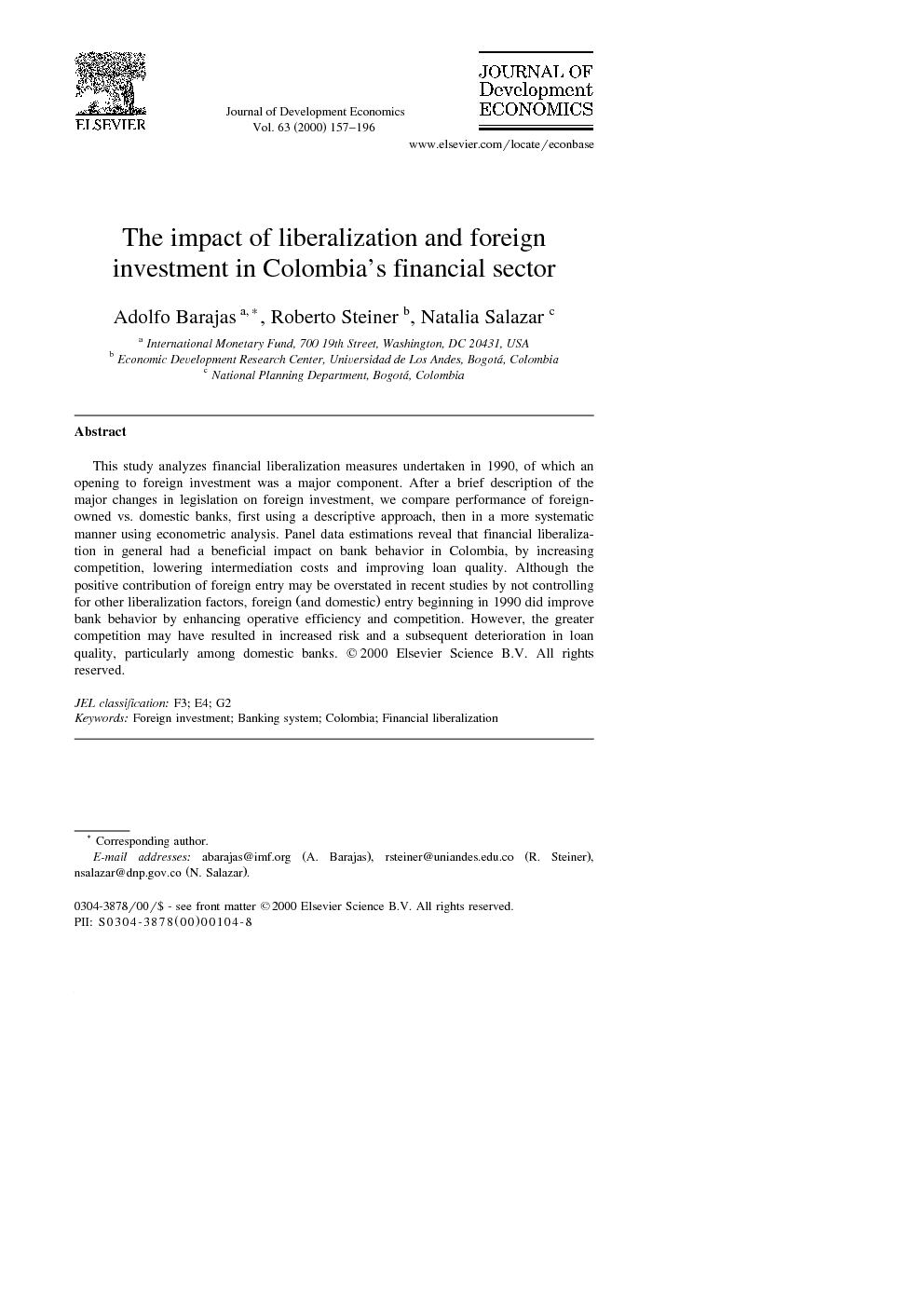 This study analyzes financial liberalization measures undertaken in 1990, of which an opening to foreign investment was a major component. After a brief description of the major changes in legislation on foreign investment, we compare performance of foreign-owned vs. domestic banks, first using a descriptive approach, then in a more systematic manner using econometric analysis. Panel data estimations reveal that financial liberalization in general had a beneficial impact on bank behavior in Colombia, by increasing competition, lowering intermediation costs and improving loan quality. Although the positive contribution of foreign entry may be overstated in recent studies by not controlling for other liberalization factors, foreign (and domestic) entry beginning in 1990 did improve bank behavior by enhancing operative efficiency and competition. However, the greater competition may have resulted in increased risk and a subsequent deterioration in loan quality, particularly among domestic banks.

After several decades of varying degrees of financial repression and restriction on direct foreign investment in the financial system (DFIFS), in the early 1990s Colombian policymakers decided to undertake a widespread financial reform program which allowed virtually free entry of DFIFS. This decision was taken as a part of a larger process of external sector liberalization, and was aimed at enhancing competition, improving resource allocation, and obtaining greater administrative efficiency in financial institutions. There is evidence that financial sector opening and the entry of foreign-owned financial institutions may provide significant benefits to a country's financial system. Analysis of cross-country information has shown how foreign entry tends to lower intermediation spreads and overhead expenses over time, with subsequent benefits for consumers of financial services (Claessens et al., 1998). Case studies of some individual countries confirm these positive results Honohan, 1997, Pastor et al., 1997 and Denizer, 1999. There is also evidence that the Colombian liberalization brought about certain beneficial impacts on bank performance, as reflected in the behavior of intermediation spreads. A recent study (Barajas et al., 1999) used aggregate banking system data and compared estimates of spreads for two distinct sample periods, one pre and one post-liberalization. It found that for the post-liberalization estimates, the behavior of intermediation spreads over marginal costs approached that consistent with perfect competition, while the pre-liberalization estimation yielded significant “market power”, thus providing indirect evidence that competition had increased as a result of the liberalization. Although the average level of spreads did not change significantly from one period to the next, the estimates showed that their corresponding “market power” component had. However, since the above study did not use an uninterrupted data set spanning the two periods, it was unable to provide a direct structural change test for the effects of reform. Nor did it separate different effects of the reform program, such as increased entry of new foreign and domestic participants, nor whether significant changes in other aspects of bank behavior and performance (namely, administrative efficiency and loan quality) had occurred. In the present study we use a newly constructed panel data set encompassing both pre and post-liberalization periods and set out to separate these different effects of liberalization, testing their significance in explaining changes in different performance indicators as well as in the degree of competition in the banking market. In particular, we analyze the behavior of DFIFS in Colombia and examine several hypotheses regarding the difference in behavior of foreign-owned banks as well as the impact of foreign entry on different types of banks. By controlling for other key elements of the reform program, this paper also aims at improving upon the Claessens, et al. type of analysis, which concentrates on foreign entry and therefore may be overstating its impact. This is particularly relevant in the Colombian case, since we know that other key changes occurred at the time that the system was opened to foreign entry. The organization of the paper is the following. First, in Section 2 we describe the institutional background, pointing out different phases in the treatment of DFIFS, from relative openness before 1967, to increased restriction culminating in a “Colombianization” of the financial system in 1975, and finally to renewed openness in the 1990s. Second, in Section 3 we examine several performance indicators during the 1991–1998, focusing on differences between domestic and foreign-owned banks on the one hand, and between domestic banks acquired by foreign investors and all other foreign banks, on the other. In addition to common performance indicators, we also look at differences in the types of activities undertaken by foreign banks, namely their geographical distribution as well as the importance of non-intermediation operations. Third, in Section 4 we use panel data on individual banks during the 1985–1998 period to test whether significant differences in pricing behavior, administrative costs, loan quality, and competitive conditions arise between domestic and foreign owned banks, whether foreign entry has affected the performance of domestic banks, and whether the mode of foreign entry matters (i.e., purchase of existing banks vs. the establishment of new foreign-owned banks). Finally, in Section 4 we provide a summary of the major conclusions and findings.