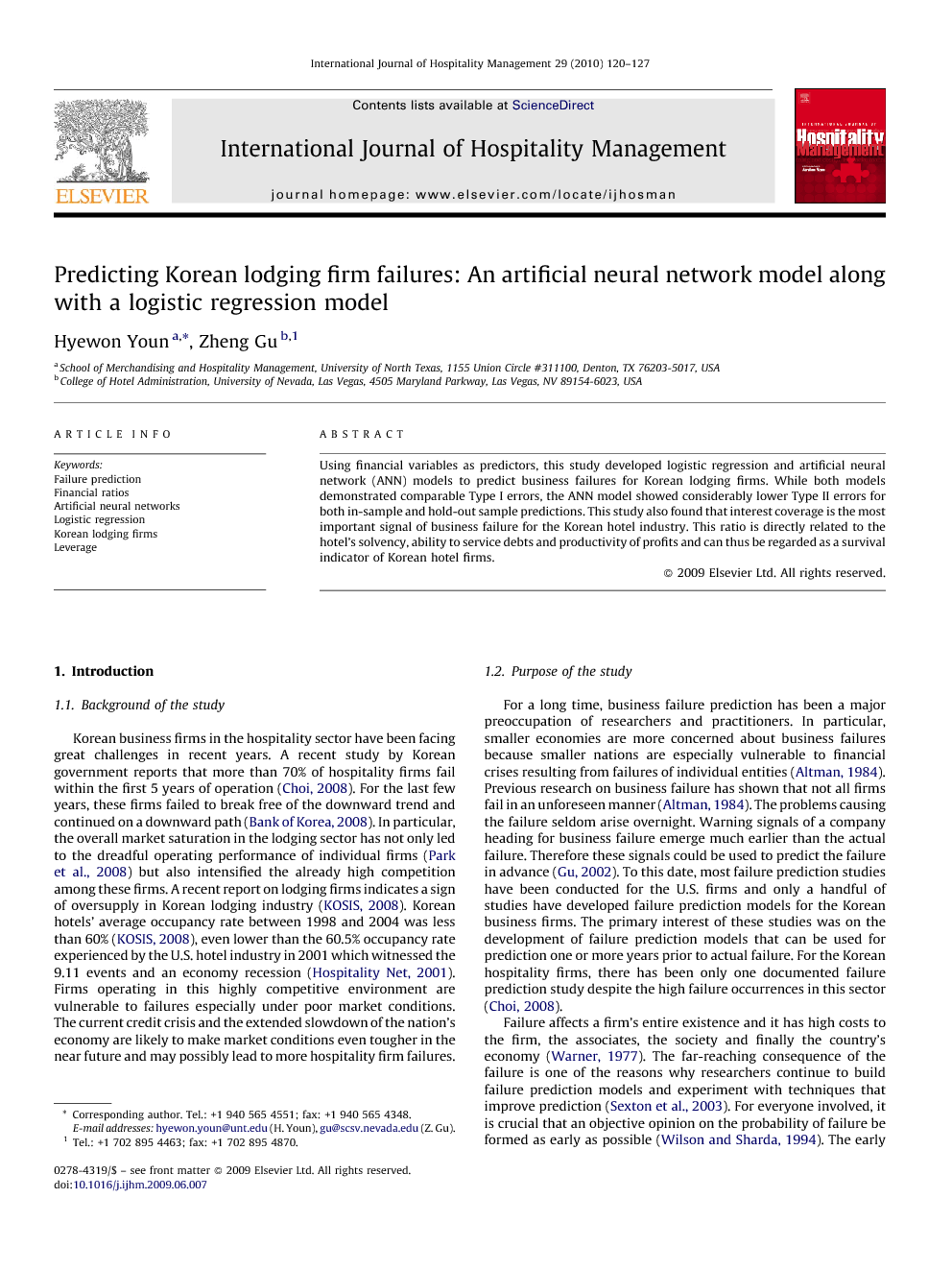 Using financial variables as predictors, this study developed logistic regression and artificial neural network (ANN) models to predict business failures for Korean lodging firms. While both models demonstrated comparable Type I errors, the ANN model showed considerably lower Type II errors for both in-sample and hold-out sample predictions. This study also found that interest coverage is the most important signal of business failure for the Korean hotel industry. This ratio is directly related to the hotel's solvency, ability to service debts and productivity of profits and can thus be regarded as a survival indicator of Korean hotel firms.

1.1. Background of the study Korean business firms in the hospitality sector have been facing great challenges in recent years. A recent study by Korean government reports that more than 70% of hospitality firms fail within the first 5 years of operation (Choi, 2008). For the last few years, these firms failed to break free of the downward trend and continued on a downward path (Bank of Korea, 2008). In particular, the overall market saturation in the lodging sector has not only led to the dreadful operating performance of individual firms (Park et al., 2008) but also intensified the already high competition among these firms. A recent report on lodging firms indicates a sign of oversupply in Korean lodging industry (KOSIS, 2008). Korean hotels’ average occupancy rate between 1998 and 2004 was less than 60% (KOSIS, 2008), even lower than the 60.5% occupancy rate experienced by the U.S. hotel industry in 2001 which witnessed the 9.11 events and an economy recession (Hospitality Net, 2001). Firms operating in this highly competitive environment are vulnerable to failures especially under poor market conditions. The current credit crisis and the extended slowdown of the nation's economy are likely to make market conditions even tougher in the near future and may possibly lead to more hospitality firm failures. 1.2. Purpose of the study For a long time, business failure prediction has been a major preoccupation of researchers and practitioners. In particular, smaller economies are more concerned about business failures because smaller nations are especially vulnerable to financial crises resulting from failures of individual entities (Altman, 1984). Previous research on business failure has shown that not all firms fail in an unforeseen manner (Altman, 1984). The problems causing the failure seldom arise overnight. Warning signals of a company heading for business failure emerge much earlier than the actual failure. Therefore these signals could be used to predict the failure in advance (Gu, 2002). To this date, most failure prediction studies have been conducted for the U.S. firms and only a handful of studies have developed failure prediction models for the Korean business firms. The primary interest of these studies was on the development of failure prediction models that can be used for prediction one or more years prior to actual failure. For the Korean hospitality firms, there has been only one documented failure prediction study despite the high failure occurrences in this sector (Choi, 2008). Failure affects a firm's entire existence and it has high costs to the firm, the associates, the society and finally the country's economy (Warner, 1977). The far-reaching consequence of the failure is one of the reasons why researchers continue to build failure prediction models and experiment with techniques that improve prediction (Sexton et al., 2003). For everyone involved, it is crucial that an objective opinion on the probability of failure be formed as early as possible (Wilson and Sharda, 1994). The early discovery of financial distress and the use of preventive measures are always preferable to protection under bankruptcy law (Aziz and Dar, 2006). Developing reliable models for predicting failures would enable these firms to take measures early to prevent failure from happening. Based on financial data of Korean lodging firms, this study developed business failure prediction models using artificial neural networks (ANN) in comparison to logistic regression. Such models should be of particular importance as Korean economy is currently undergoing economic distress, triggered by global financial turmoil. In comparison to multiple discriminant analysis (MDA) and logistic regression, ANN is a relatively new classification technique, and to the best of our knowledge, has never been documented in hospitality failure research. Applying ANN to Korean lodging firm failure prediction, this study also attempts to make a methodological contribution in hospitality research.

Our results show that for Korean lodging firm failure prediction, the ANN model had an advantage over the logistic regression model in prediction accuracy. While both models demonstrated comparable Type I errors, the ANN model showed considerably lower Type II errors for both in-sample and hold-out sample predictions. Many studies in failure prediction literature using ANN methodology have examined the relative performance of ANN over other classical statistical techniques (Zhang et al., 1999) and the majority of them found that ANN models had produced classification results comparable to or better than logistic regression models in terms of prediction accuracy (Charalambous et al., 2000, Charitou et al., 2004, Lee et al., 1996 and Zahedi, 1996). Using the data set of Korean lodging firms, our study confirms the findings of those earlier studies regarding the predictive ability of the two models. Our findings lead us to conclude that interest coverage is the most important signal of business failure for the Korean hotel industry. To avoid business failure, Korean lodging firms should, first and foremost, increase the interest coverage. This ratio is directly related to the hotel's solvency, ability to service debts and productivity of profits and can thus be regarded as a survival indicator of Korean hotel firms. It is also concluded that while the ANN model may provide more accurate prediction, it fails to self-explain the model variables and hence has limited utility for decision makers to take early actions to avoid failure. Here, the logistic regression model has an advantage in terms of model variable explanation and managerial implications for failure prevention. The decision for model selection between the logistic regression and the ANN models should be made based on the objective of classification. If the primary purpose of developing a failure prediction model is to classify a given set of observations as accurately as possible, then the ANN model may be used. Theoretically, the ANN model is preferable to the logistic regression model as it does not suffer from restrictive assumptions. On the other hand, if the researcher wishes to make a practical interpretation on the developed model or to understand the roles played by each retained variable in the prediction output, then it is recommended that the logistic regression model be considered as the preferred method for predicting firm failures. For predicting Korean lodging firm failure, using a combination of both models is more recommendable. While the ANN model can be used to give a more accurate and reliable assessment of the hotel's future financial status, the logistic regression model may be employed to identify ways to prevent failure. A major limitation of this study is the developed models’ limited time frame for failure prediction. These models can predict failure of a firm just one year in advance, and 1 year may be too short for firms to take corrective actions to prevent failure. Since many of the failed firms in the sample had only 1 year of data available prior to failure, the models could not be tested for longer prediction time horizon. Future studies on Korean lodging firm failure prediction should consider extending the prediction horizon to several years ahead when longer time frame of Korean hotels’ financial data become available.